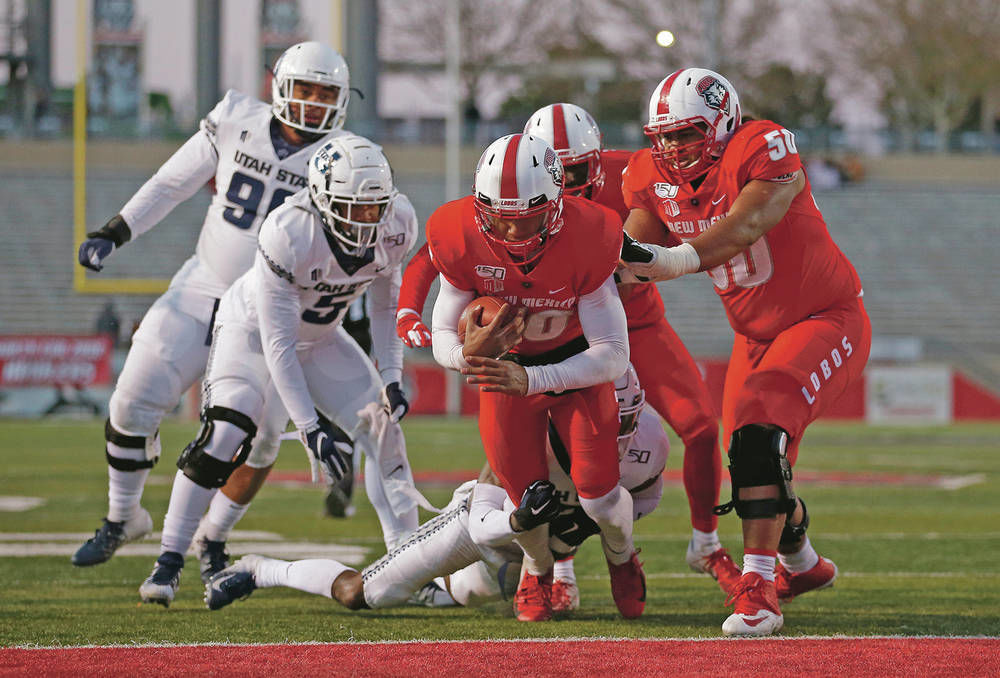 UNM quarterback Trae Hall scores a touchdown against Utah State on Saturday in Albuquerque. Hall, in his first career start, rushed for 115 yards and two scores and threw two touchdown passes in the 38-25 loss. Photos by Andres Leighton/The Associated Press 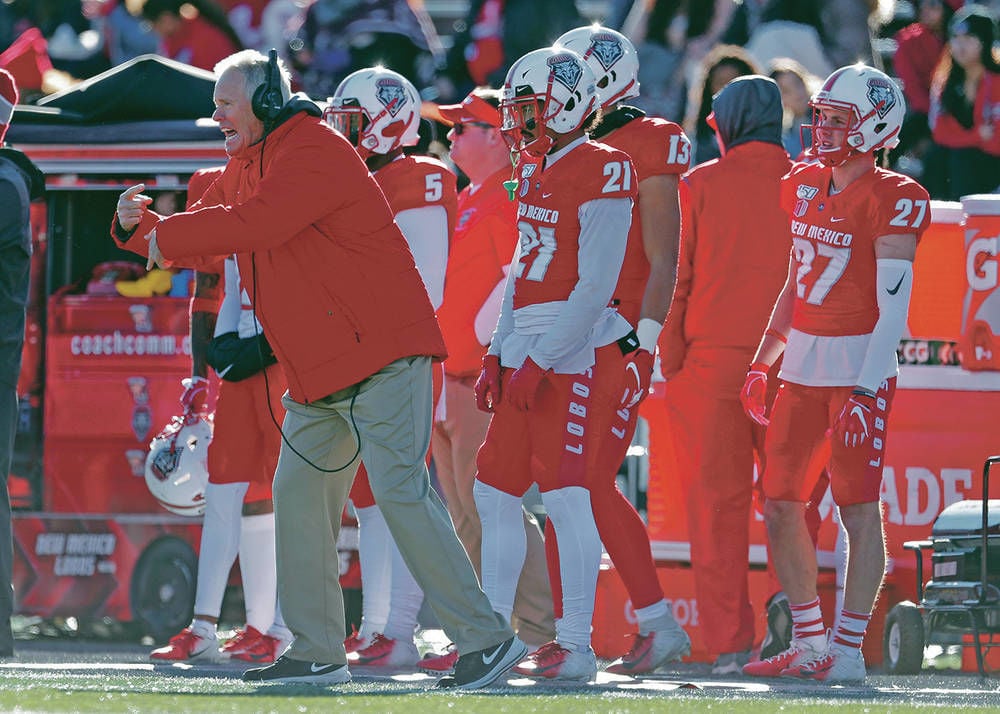 UNM coach Bob Davie lost his final game with the Lobos, falling to 2-10 on the season. Last week, he and UNM agreed to mutually part ways. The Lobos have had three straight losing season, its sixth in eight years under Davie. Andres Leighton/Associated Press 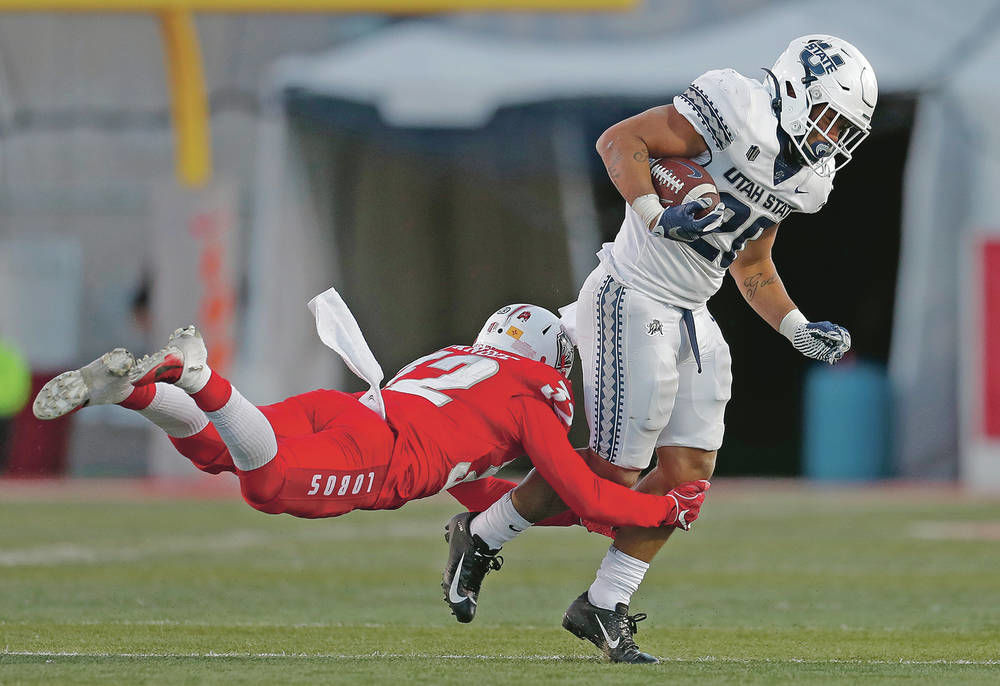 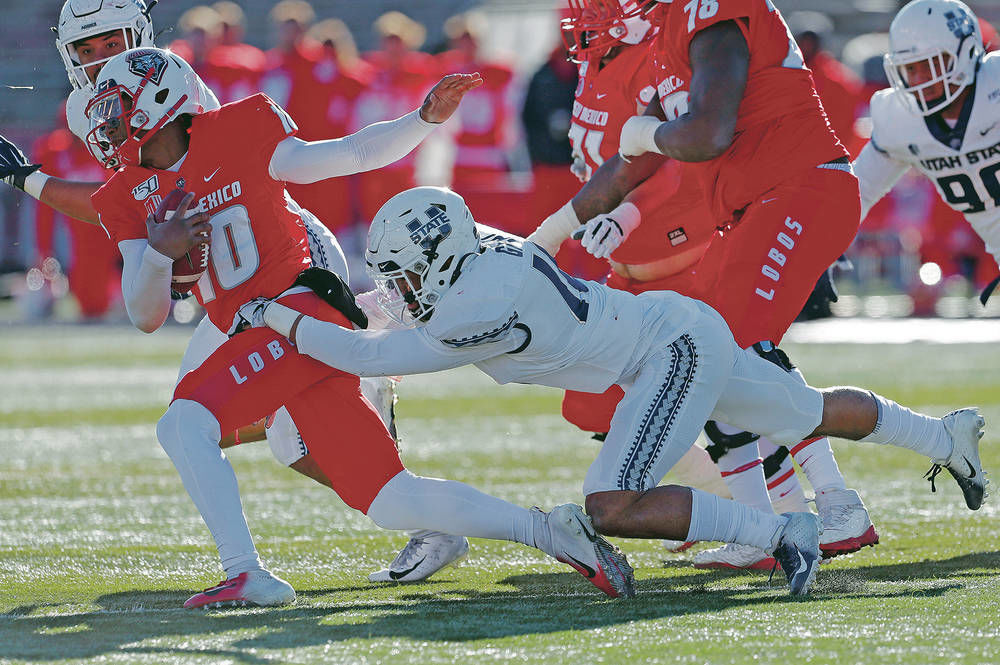 UNM quarterback Trae Hall scores a touchdown against Utah State on Saturday in Albuquerque. Hall, in his first career start, rushed for 115 yards and two scores and threw two touchdown passes in the 38-25 loss. Photos by Andres Leighton/The Associated Press

UNM coach Bob Davie lost his final game with the Lobos, falling to 2-10 on the season. Last week, he and UNM agreed to mutually part ways. The Lobos have had three straight losing season, its sixth in eight years under Davie. Andres Leighton/Associated Press

In one sentence, that’s how Bob Davie’s time as the head coach of the University of New Mexico’s football program came to an end before an announced crowd generously listed as 11,611 on Saturday.

In truth, fewer than 2,000 to 3,000 fans were there at any one point. By the time the sun had set in the fourth quarter and the outcome was no longer in doubt, the entire west side of the stadium had about 200 people — nearly half of which was the UNM spirit band.

The final score had visiting Utah State winning 38-25, a result that mercifully ends a painful 2019 season in which the Lobos (2-10 overall, 0-8 in the Mountain West) lost nine straight.

Roughly one-fourth of the roster graduates and a handful of others may not return due to injury or attrition, thanks to the coaching change.

Now it’s time for the university to get serious and find Davie’s replacement before things get even worse — which is almost hard to imagine given the lowly state of the Lobos. With things falling apart seemingly by the second, the search is already well underway.

“The process begins as soon as the change is made,” UNM athletic director Eddie Nuñez said. “You know, people start calling and everything else, and right now I’m just trying to put those to the side for the time being.”

The “time being” was saying goodbye to the 21 seniors on the New Mexico roster. It was a sad and emotionless farewell before Saturday’s game, which kicked off with game-time temperatures in the upper 30s with a steady breeze blowing from the west — and state championship high school football games in Rio Rancho and Los Lunas that drew several thousand fans each, games that surely kept at least a handful of Lobo supporters at bay.

One by one, the UNM seniors were introduced to the roughly 36,000 unoccupied seats, each player running out of the canvas tent tunnel connected to the Tow Diehm facility without so much as a standing ovation for their service. One of them was defensive back De’John Rogers, who capped his final game as a Lobo with an interception and five tackles.

He said he’s not the type of player to look into the stands for the fans’ reaction, so whether it’s 500 people at Dreamstyle Stadium or 100,000 at a Power 5 giant, it makes no difference to him.

“Before I came here, I played at a junior college and you could play a school that has nobody in the stands, but you still got to play the game,” he said.

What followed was another long and forgetful day for the Lobos as Utah State led from start to finish. The Aggies might well return for the New Mexico Bowl next month while UNM looks to pick up the pieces of Davie’s departure.

With two weeks left in the district regular season, area prep basketball teams are battling for postseason positioning. The UNM men, meanwhile, try to rebound after losing six of eight.

“The last one I coached at the last place I was at [Notre Dame], I think there were 85,000 people in the stands,” Davie said in a postgame news conference that lasted just five minutes, likely the shortest postgame media session he had in eight years with UNM. “Even though there were probably 500 people here at the end of this game, I’ll remember this one.”

Having orchestrated the first winless campaign in their 20-year history of the MWC, the Lobos are in need of a miracle worker to resurrect a program that has spent the last three years flatlining in more ways than one.

Nuñez said he’s not looking for a savior. What he wants is something slightly less dramatic.

“I’m not going to sit here and say that, you know, we’re going to have a coach that’s going to come out here and win 10 games every year,” Nuñez said. “What I want to do is find somebody who’s going to buy into what the culture is here. It’s a rich tradition in New Mexico, in Albuquerque. Our coaches have shown it across the board, and there shouldn’t be any difference in hiring this next coach. I want somebody who’s going have a passion and going to want to be here. This is an unbelievable opportunity. The Mountain West has had success, and those are going to be criterias [sic] at some point, that are included with the overall approach.”

That “culture” is clearly a school, city and state where football is not a priority. Davie spoke at length this season about not getting the support he desired from the administration. He touched on it again Saturday.

“Positivity, resilience, bounceback — you know those are depletable resources,” he said. “That’s why alignment and support are so important because at some point, you need it rejuvenated along the way. This has been a unique, unique, unique challenge, and it’s time for the next guy. I wish him well whoever that is, and I wish the players well, but there needs to be alignment.”

Nuñez said he feels the state of the program doesn’t meet his standards, or anything that fits UNM or the conference.

“[Davie] understood what he wanted to see from his program as much as we did,” he said.

Asked what he felt the condition of the football program was in as he heads off into the sunset, Davie said it wasn’t for him to say. His legacy is for others to debate. “I probably see it through a different lens because I know exactly what it’s been,” he said. “Somebody can look through their lens and just judge it on won-loss record or on 2-10 this season. That’s fine, go ahead. I’m pretty comfortable, confident through my lens that I’m walking out of here with my head held high and I gave it all I had. And I’m not going to apologize.”

Davie coached 51 games in Dreamstyle Stadium. Two of them were bowl games. The total attendance for every single one of them was 1,057,013 between 2012 and Saturday’s finale, which had the smallest crowd of any game he has coached at the major college level. … Lobos quarterback Trae Hall made his first start Saturday, making him the fourth player to start at that position this season. That’s tied for the most starting QBs in the FBS. … Hall rushed for 115 yards and two touchdowns will passing for 107 and two additional scores. He is believed to be the first Lobo to ever go over the century mark in both passing and rushing in his first career start. … The Lobos scored four touchdowns but failed to convert three of the extra points. … Seven MWC teams earned bowl eligibility. New Mexico was the only team in the league to lose more than eight games, going 0-6 on the road.

Nuñez said he has reached out to former head coaches Rocky Long and Dennis Franchione, as well as former Lobo star and pro football Hall of Famer Brian Urlacher to get their insight on what they feel the program needs most.