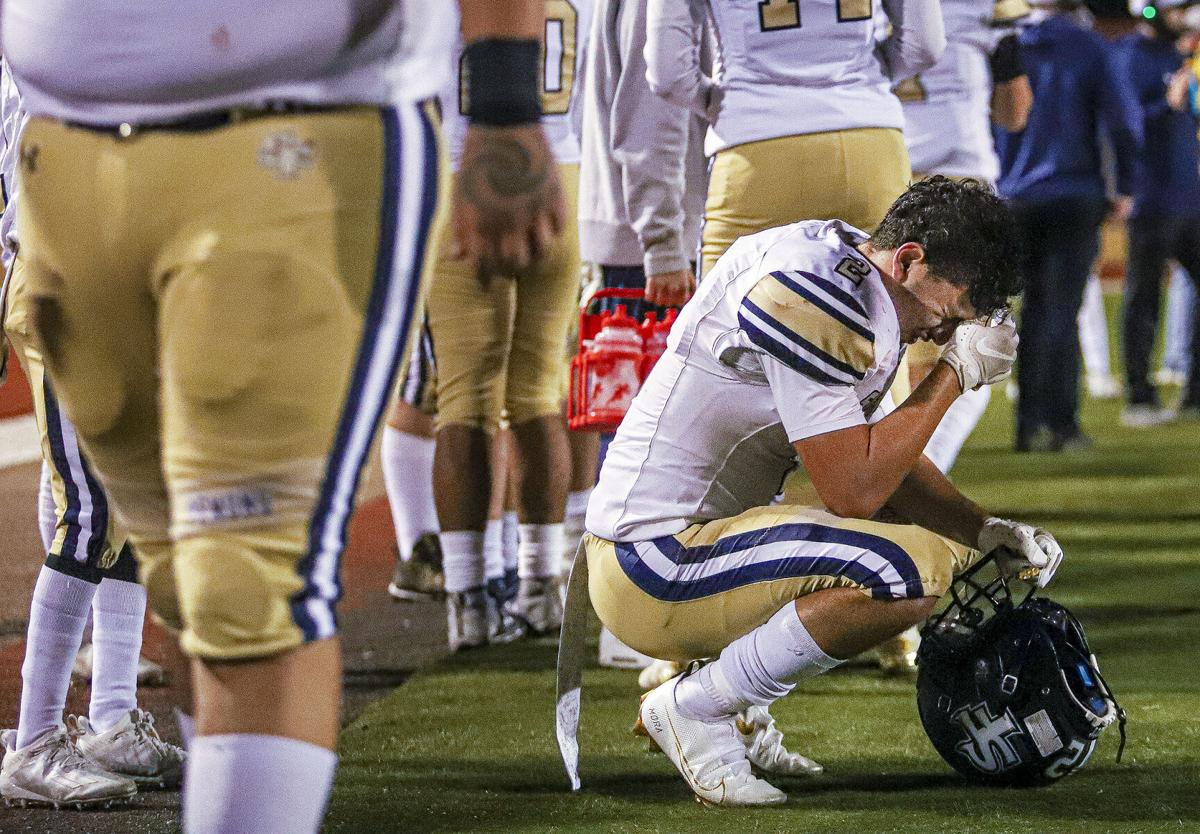 Santa Fe High’s Alex Mora reacts Friday on the sidelines against Sandia in Albuquerque. For the first time this season, coach Andrew Martinez said his team did not match the physicality of its opponent. It showed almost from the start of the game. Sandia drilled the Demons 55-28. 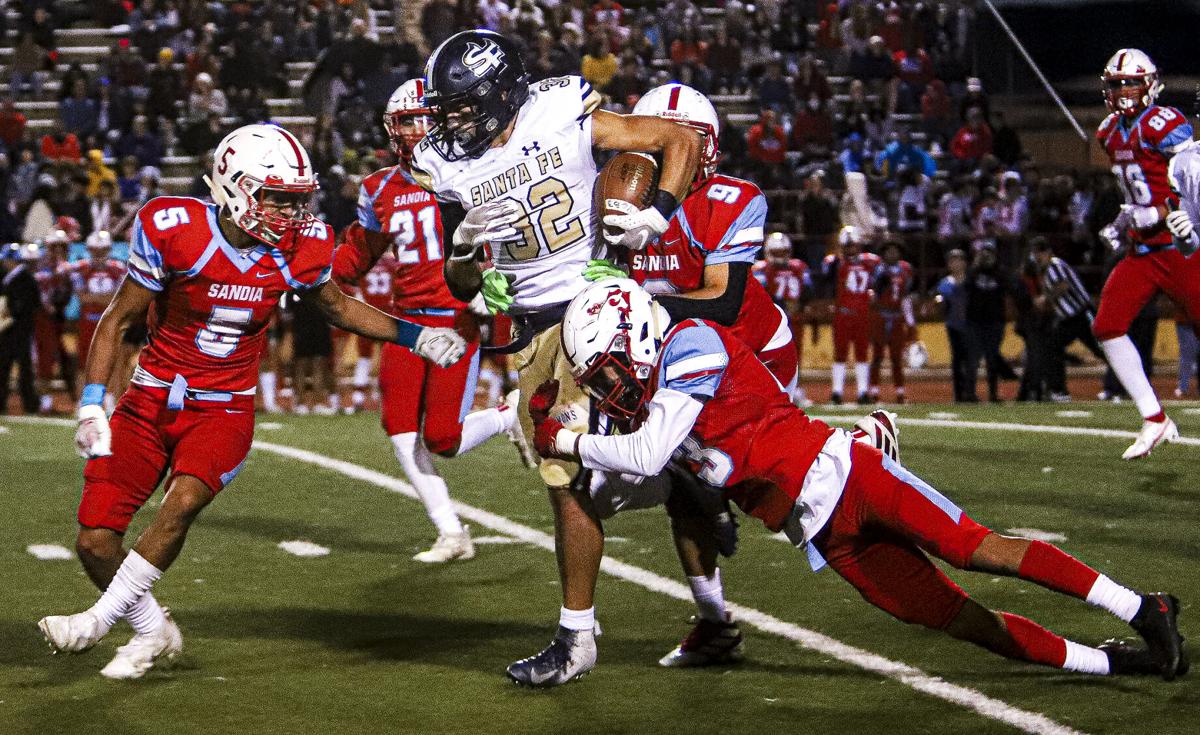 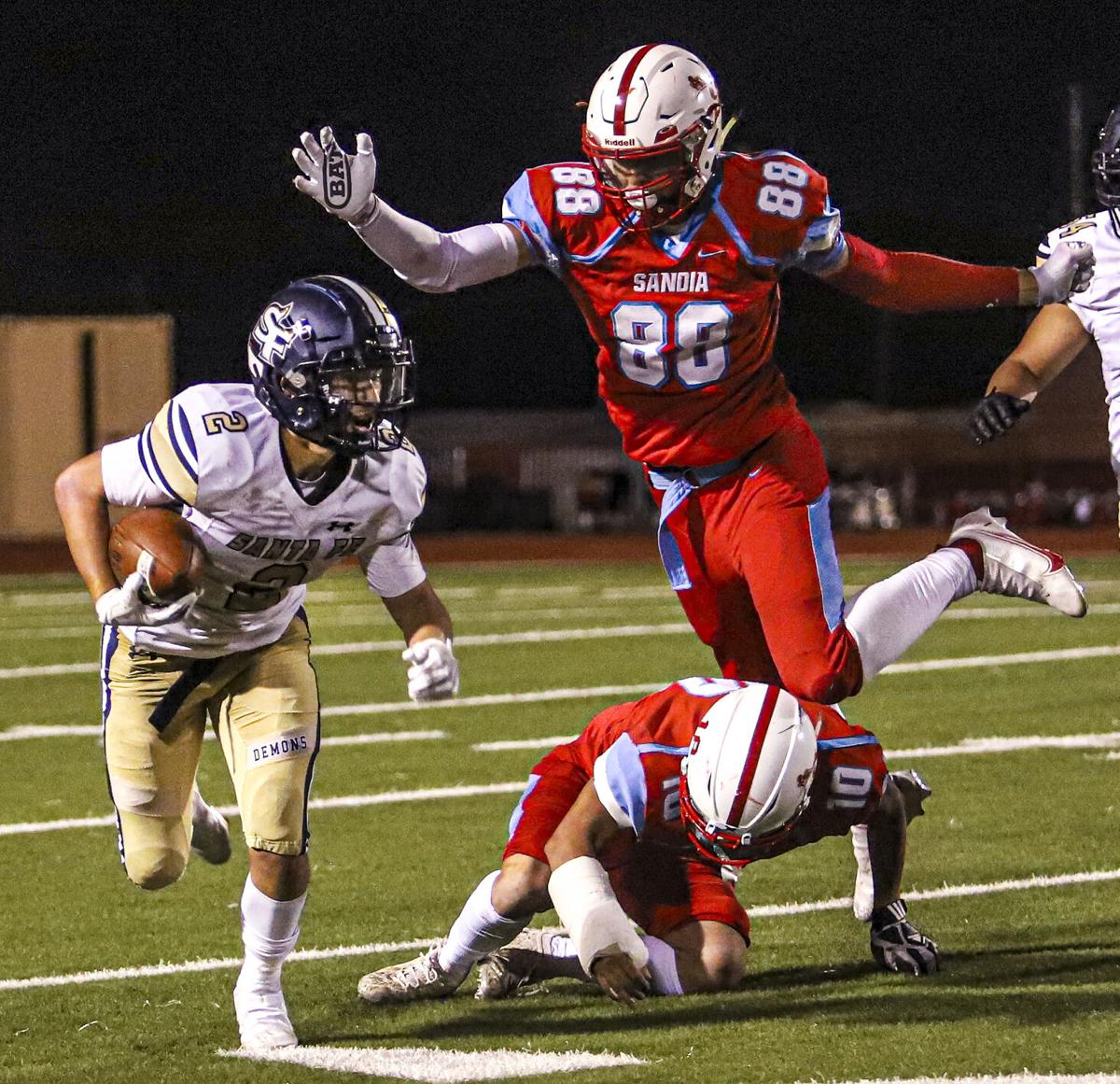 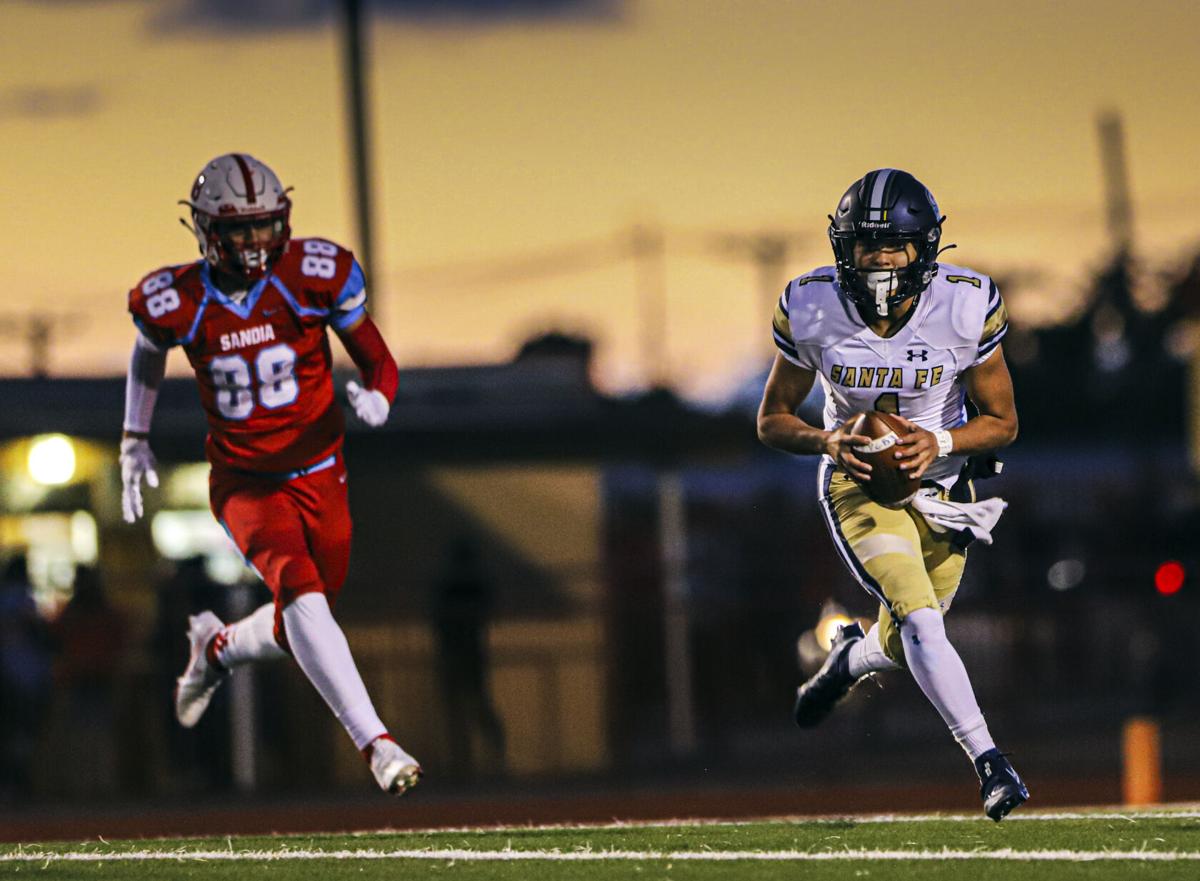 Santa Fe High’s Alex Mora reacts Friday on the sidelines against Sandia in Albuquerque. For the first time this season, coach Andrew Martinez said his team did not match the physicality of its opponent. It showed almost from the start of the game. Sandia drilled the Demons 55-28.

As coach Andrew Martinez looked out upon the 32 Santa Fe High Demons who kneeled around him on the turf at F.M. Wilson Stadium, he was succinct in his team’s predicament with three weeks left in the 2021 season.

Trouble didn’t just come in the form of the host Sandia Matadors, who dominated just about every facet of the game in rolling to a 55-28 District 2/5-6A win over the Demons on Friday night.

It didn’t just come in the form of five missing Santa Fe High starters who were either sick or not in town, or the tender ankle of star running back Martell Mora, who at one point muttered, “My foot is burning” as he walked off the field.

It also came in the simple form of an activities bus, because it meant the Demons had to turn into road warriors. Martinez, the fifth-year Santa Fe High head coach, said he hasn’t seen his team do that yet this season.

“We have to find a way to do better on the road and be ready to play, which we’re not at this point,” Martinez said. “I gotta look at what I’m doing wrong first, and I gotta fix it.”

For the first time this season, Martinez said his team did not match the physicality of its opponent. It showed almost from the start of the game.

Sandia (2-4 overall, 1-1 in 2/5-6A) punted just twice as it managed 483 yards of total offense. Quarterback Dalen Moyer connected on 10 of his first 13 passes and finished 14 for 21 for 239 yards and three touchdowns. Matadors running back Malachi Thymes ran for 141 yards and two touchdowns to lead a rushing attack that gained 244 yards.

It seemed like the Demons (5-2, 1-2) were a half-step slow, which was just enough for Sandia to wreak havoc. Santa Fe High senior cornerback/wide receiver Joaquin Martinez said the team’s energy level isn’t there like it is for home games.

“When we come to Albuquerque, we freak out and get scared,” Joaquin Martinez said. “Like coach said, the energy is different. At home, we’re ready. Over here, it’s like a bunch of deer in headlights.”

Despite Sandia’s offensive explosion, the Demons found themselves down just 14-13 in the final seconds of the first half when four plays turned a rough start into a long night.

Sandia were fourth-and-goal at the Santa Fe High 3 yard line with 13 seconds left when the Demons were called for offsides, even though the ball had not been snapped.

The penalty came on the heels of a third-down play in which Moyer threw the ball away to the left corner of the end zone, even though no player was in the vicinity. The Santa Fe High coaching staff argued for an intentional grounding penalty, but the lead referee told Martinez the intended Sandia player ran the wrong route.

Reprieved, Thymes scored on a 1-yard touchdown run with 8.3 seconds left to give Matadors a 21-13 lead. Then, the Demons muffed a squib kickoff, which Sandia recovered at the Santa Fe High 34.

Moyer ended the half by heaving a Hail Mary pass that was batted, then caught by Andrew Hill, who bulled his way into the end zone for a touchdown and a 28-13 lead.

After making a pair of body blows, the Matadors tried for the knockout on the opening kickoff of the second half. Gauge Berlint took a short kickoff on the left side of the field, then ran to the right side and around the Demons for a 75-yard return and a 34-13 margin just 14 seconds into the second half.

“It was just physicality,” senior linebacker Santiago Ortega said. “You just got to come out and be better than them, physically.”

Even though, Alex Mora responded with a 98-yard kickoff return on the next play to bring the Demons within 35-21, the Matadors’ offense simply picked up where it left off.

A six-play, 63-yard drive culminated with a 7-yard touchdown run by Berlint.

The point-after kick was missed, but a 41-21 lead was too much for the offensively challenged Demons to overcome.

They managed just 88 yards of offense in the first half, and 156 for the game. If not for Alex Mora’s kickoff return and an 85-yard interception return by Daniel Wright for a touchdown, the final score would have looked worse for the Demons.

With the season down to three games, Martinez said every game is a must-win, especially next week’s matchup against Clovis. Suddenly, a break-through season is in jeopardy.

“We gotta win out,” Martinez said. “We can’t lose to Clovis. That is why this loss is real, real bad. We got to win this week.

Sandia came to play and are a really good football team.

Demons scored on 43 yd touchdown pass from Luc Jaramillo my son to Martell Mora. And Luc hit Joaquin Martinez on 23 yd TD after a 50 yd punt return by Martell. We scored and had two big plays on special Teams & Defense. Our boys didn’t quit! That’s something we are proud of. Tip your hat to Sandia they came to play and had some explosive plays, trick play on a sweep slot back pass. Their QB, RB, receiver’s, special teams & defense - all phases played tremendous. Our boys had some bright spots as well. Proud of our boys & we have to bounce back! Get ready for Clovis.

Playing in 6A district requires maximum effort every week it starts in practice on Monday. Every team has good athletes and has quality coaching. Sandia’s coach won a state championship three years ago with Manzano. The Santa Fe coaches will review the game film and will correct the mistakes. The team needs to continue to work every day. The challenge this coming week is Clovis. They will come to Santa Fe with a good game play expecting to win. The Demons need to be ready to play four quarters to win and get back on track.

The reality of playing in this district just hit home. This was their first test of adversity this season. Going forward, they are either going to rise to the challenge or they will revert back to their old ways... David is right, you can't coach the mental toughness. It is all up to the kids. I wish them the best, but now we are going to see what Santa Fe High is made of.

Winning on the road is all about mental toughness. You can't coach it, it has to be there. It's up to the players to build some confidence and and go out there on the field and play like they have some. The stigma of getting killed by these Albuquerque teams is still there. It's not going away over night.

The Demons just beat Manzano last week so that doesn’t make any sense. Demons lost to Eldorado by two scores and the game was closer than the score indicated. In fact, if not for a bunch of dropped passes, and one pass just inches from an open receiver and it’s all tied up or we are up!

Against Sandia it was 14-13 with approximately 20 seconds to go before half, but a couple of unfortunate/referee blunders that changed the momentum and caused Sandia to go for a TD instead of a field goal before halftime. And that lead to 30 seconds of an unprecedented sequence of unfortunate events for the Demons. It was 4th & goal from the 5 and the Albuquerque refs called offsides prematurely against the Demons. Usually both players on each side of the ball are allowed to check with sideline refs to see if they are not lined up offsides. In this case the opposite sideline ref blew the whistle way early and flagged SFHS for offsides, that lead Sandia to take their FG unit off the field, and they decided to go for the TD instead of the field goal. Now it’s 4th & goal from the 2.5 yd line and Sandia scores a TD. The big non call was on 3rd down before the 4th down mentioned above Sandia’s QB throws a corner route in the end zone to no one! There is not one Sandia player even 15 yds in the vicinity of the pass! That’s intentional grounding a 10 yard penalty and loss of down! Sandia for sure goes for the FG! What’s more frustrating is that same ref called intentional grounding on my son vs Eldorado, and he threw a ball over the head of our receiver that was in the direct area of the pass! The refs in this case say that the receiver ran the wrong route! What! How do they know and that doesn’t matter it’s intentional grounding because there was not a receiver in the area and the errant pass caused the clock to stop. That would have been called in the pros, and the pros QB’s can throw out of bounds, but they to be out of the tackle box. That rule doesn’t exist in HS - in HS a QB has to throw a pass in the general vicinity of an eligible receiver.

So Sandia scores after the hometown calls and they

on- side kick recover the kick with 10 seconds or so. Sandia throws a Hail Mary pass that is tipped and the ball finds its way to a Sandia player for another TD. It’s now 28-13 at halftime, Sandia then takes the opening 3rd Quarter kickoff to the house now it’s 35-13 this all happens in 30 seconds of game clock. Demons then take the next kickoff is the house for a TD. Sandia gets the ball back and scores again. Our office gets the ball finally after 4Td’s by Sandia. Demons score one more time & Sandia scores again as well...

It’s been a long time since we have won playoff games, in fact not since I played 36 years ago. We beat Albuquerque teams then and these Demons already have! These Demons can still make the playoffs and they will get a chance to beat Clovis and that’s something they can do! Go Demons! Go Luc#1 you can do it!’