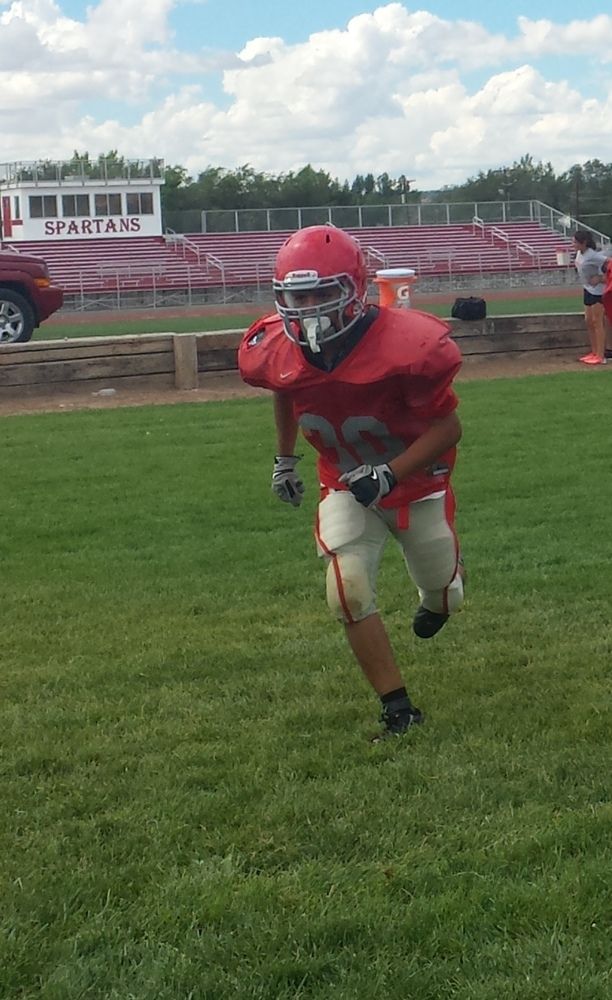 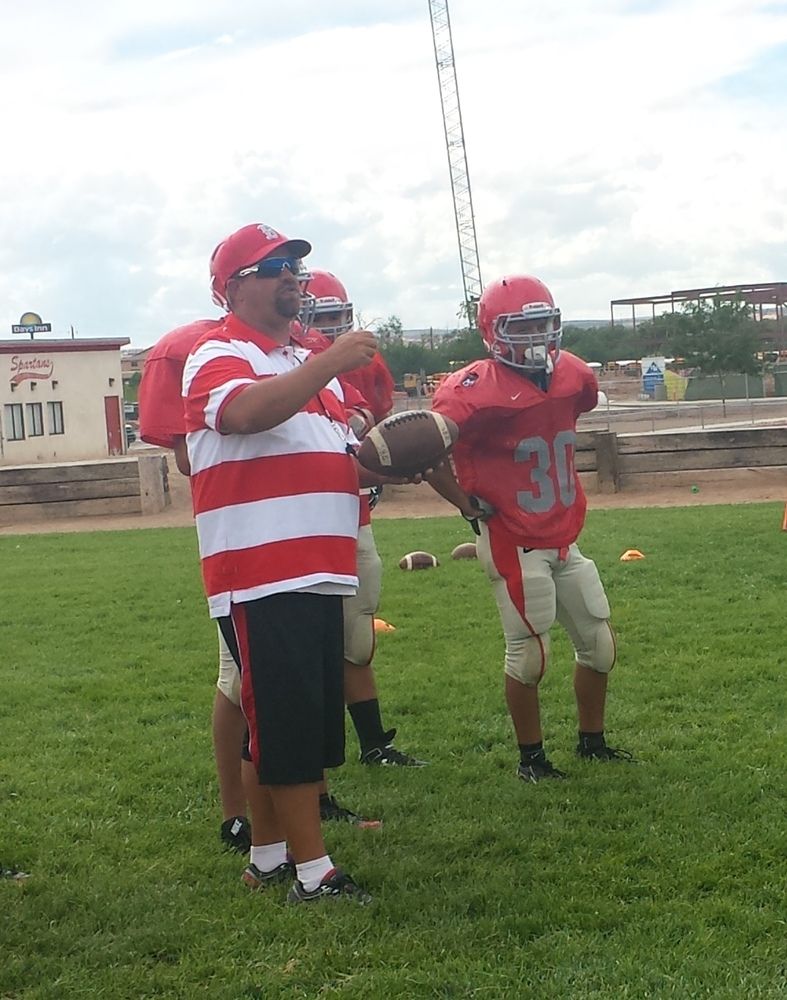 Bernalillo head coach Trent Spencer demonstrates a pass defense technique on junior Brian Guerrero during Thursday practice at Bernalillo High School. Spencer is the first-year head coach of the Spartans, who were 3-7 in 2013 and finished tied with Santa Fe High and Los Alamos atop the District 2AAAA standings. James Barron The New Mexican

BERNALILLO — Buy in, or opt out.

Trent Spencer once was a salesman, and he gave his best sales pitch on the practice field at Bernalillo High School on Thursday afternoon. The first-year head coach of the Spartans saw his practice come to an abrupt halt with a scuffle between two players, and he talked to his team for about 10 minutes about his expectations of his players, especially the uperclassmen, and the virtues that football can extol on his players.

If anything, Spencer was selling his vision of the program to the 25 players on the field. But what he did is not really different than what most other first-year coaches do in their inaugural season, especially when taking over for a veteran coach. Spencer was hired in January to replace Ken Noel, who resigned after eight seasons at the school and turned what many had deemed a dead-end program that was competitive in District 2AAAA (now 2AAAAA), if not Class AAAA.

Spencer, who has taught at Bernalillo since the spring of 2013, had prior coaching experiences at Wingate (2003-07) and Laguna-Acoma (2008-10) before taking over at Bernalillo, so he knows he ropes of a first-year head coach. And his sales pitch goes something like this:

“Sell having fun, sell coming out, sell being a part of this,” Spencer said. “Sell that they’re equal. Sell that I am fair to everybody and I treat everybody equally.”

Spencer helped build Wingate into an eventual District 1AAA champion the year after he left in 2008 and went 22-8 at Laguna-Acoma before spending a year as the defensive coordinator at Grants the year it reached the AAAA playoffs. he feels his track record shows that he can create a strong program at Bernalillo.

It’s up to his players — especially the eight seniors on the roster — to buy into his philosophy. Thursday’s incident, to some, was merely the signs of the weary journey of two-a-days, where a teammate can turn into a combatant in the heat of practice.

“We’ve got good leaders, even though one of us didn’t show it,” said senior quarterback Ralph Olguin. “We’re trying to move forward with this. It’s tough, having to grow through this new stuff and develop it all over again. It sucks, but at the same time, we’re all trying. It’s just frustrating for some of us who have bought into Noel’s program and now we have to get used to a new one.”

While the players are adapting to Spencer’s program, he’s trying to sell Bernalillo football to the rest of the school. Six prospective players watched through offensive and defensive drills, and Spencer hopes they will stick around — and possibly bring a few more players to add some depth to a team that sorely lacks it.

Bernalillo has about 27 players taking part in practice, and Spencer knows those type of numbers can’t sustain a AAAAA program.

“A lot of what I have out here are new players who haven’t played before or are just now coming out or hadn’t played since their freshman year,” Spencer said. “You kind of have to build that. At [Laguna-Acoma], I had just eight players that first summer, and we built it in three years to 42. So we’ll see what we can do.”

Senior running back Luis Molinar sees the low numbers and realizes the risks associated with that.

“Depth is the most important thing for a team,” Molinar said. “It hurts not only the coach, and not only the people actually playing, but every single player when you have guys that could be better in certain positions going against other players to make themselves better. It hurts the team all around.”

What the Spartans have are a group of seniors who feel a sense of unfinished business to build around for 2014. Bernalillo almost sent Noel out with a third 2AAAA title during his tenure, finishing in a three-way tie with Los Alamos and Santa Fe High at 3-1. There was a heart-aching 39-35 loss to Los Alamos to open the 2AAAA season in which the teams traded the lead until the Hilltoppers stopped Bernalillo 9 yards shy of a winning touchdown in the final 25 seconds.

The Spartans rebounded with a 43-42 double-overtime win over Santa Fe High, but lost out on the point differential tiebreaker to the Demons at the end of the season.

“It’s been motivating us all summer,” Olguin said. “All of us upperclassmen and returners talk about it every day and try to use it as motivation not to make those mistakes again.”

Olguin returns as a veteran and savvy quarterback who will a spread offense that will feature an option-style running attack. Molinar will be one of those running backs who will receive plenty of carries, along with freshman Andre Bethea, a 5-foot-8, 205-pound bowling ball. With the Spartans lacking depth, expect most of the seniors to play on both sides of the ball, along with juniors Bryan Guerrero and Johnny Unale.

Yet, for all of Bernalillo’s talent and potential, the most important element to a successful 2014 season lies with the Spartans’ hearts — and their heads.

“We all respect Noel, and we’ve been around him for so long,” Molinar said. “The only way we are going to succeed is if we buy into [Spencer’s] system, so we don’t really have a choice, especially because it’s our last year. If we don’t buy in, it’s our fault.”

Those are the terms, and Spencer is selling that the Spartans will buy them.