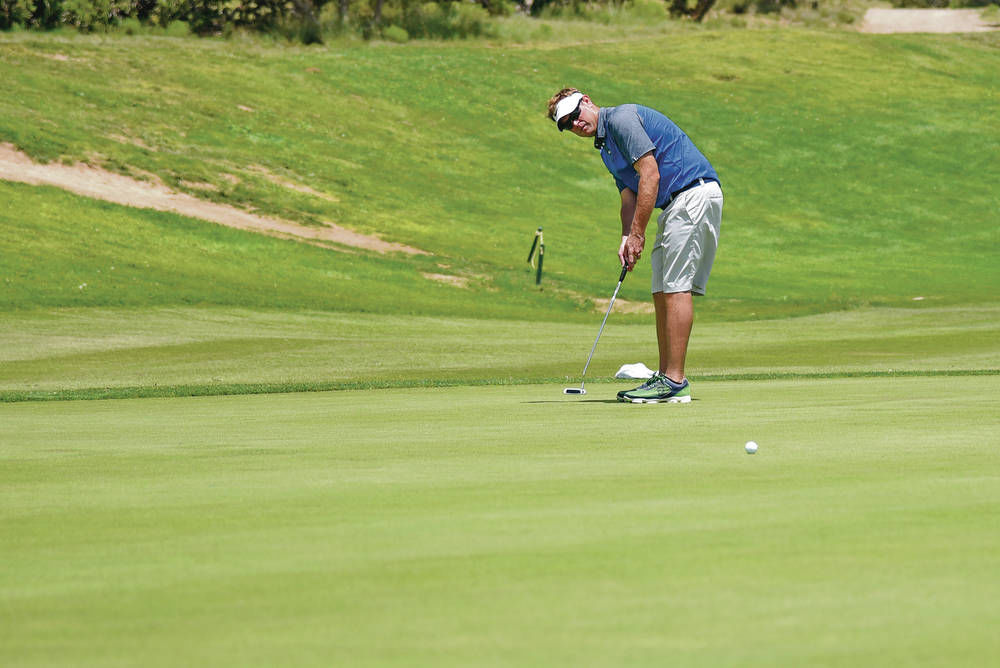 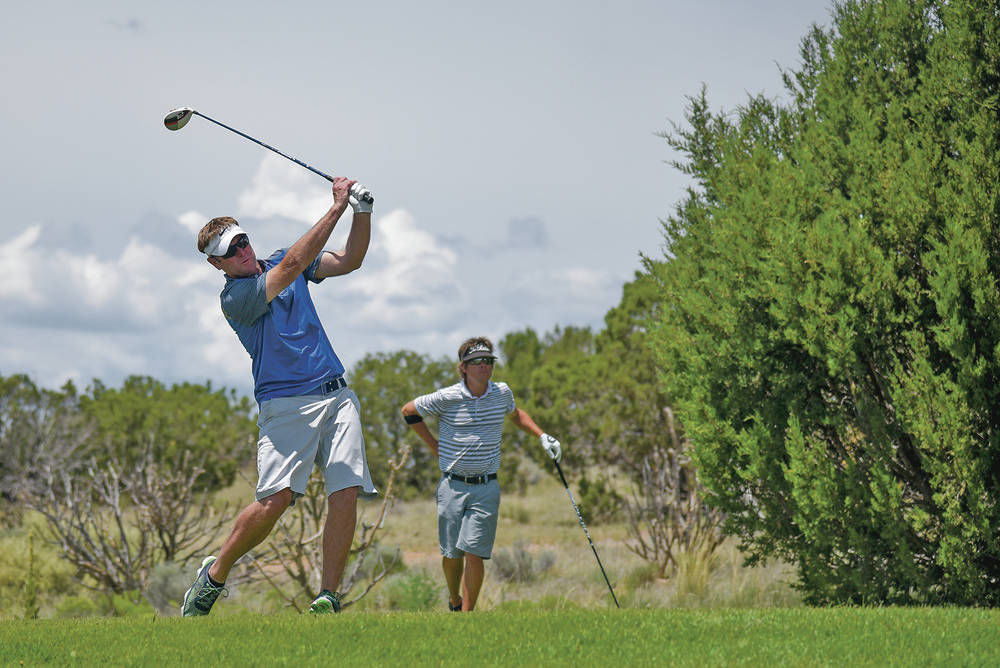 Jonathan Bartlett tees off the 18th hole Saturday at the Marty Sanchez Links de Santa Fe in the final round of the Santa Fe Golf Championship. He won the men’s tournament by five strokes.Luke E. Montavon/For The New Mexican 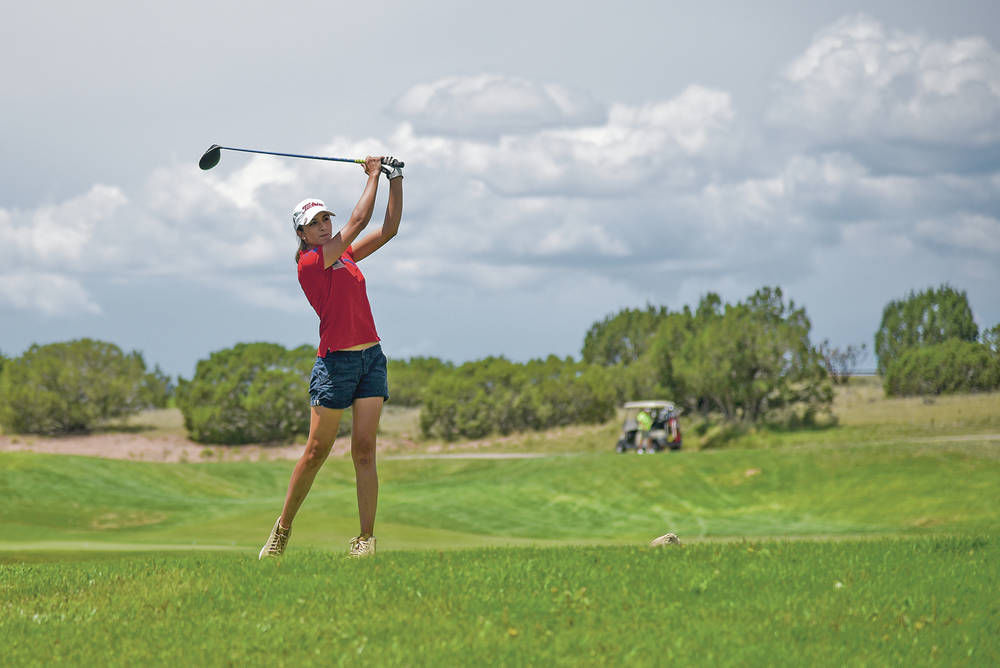 Jonathan Bartlett tees off the 18th hole Saturday at the Marty Sanchez Links de Santa Fe in the final round of the Santa Fe Golf Championship. He won the men’s tournament by five strokes.Luke E. Montavon/For The New Mexican

That was Johnathan Bartlett’s practice routine leading up to the Santa Fe Golf Championship.

It consisted of playing golf with his family, often getting nine holes as opposed to 18 in on a consistent basis. In fact, Bartlett admits he’s played perhaps 10 full rounds of golf since he came to Santa Fe just 10 months ago after taking a job as the vice president of sales for Las Campanas Realty.

“Now, I enjoy this: Janell and my two boys, we’d go out and hit balls or go play nine holes in three, 3 1/2 hours,” Bartlett said. “Just kinda hit and giggle. Just having a little fun with the family, and that’s what it’s all about.”

The fun element crept into his three days in the championships flight of the tournament, as his final round score of 2-over 74 a Marty Sanchez Links de Santa Fe on Saturday capped a three-day stretch in which Bartlett shot a 6-under 216 to win the tournament by five strokes over Eric Trujillo and six over Gabe Alcala.

Bartlett led practically wire-to-wire after carding identical 4-under 68s to build a seven-stroke lead heading into Saturday. The final day consisted of him simply playing the course conservatively, and it led to 13 straight pars after going 2-over through the first four holes. Experience taught the former player at Ole Miss, who played in one PGA Tour event as well as dozens of others on the lower levels before regaining his amateur status just last month, that there are few positions better to be in than one in which you have a big lead.

“Obviously, you’d rather start the day with a seven-shot lead than be behind by seven strokes,” Bartlett said.

He pushed it up to eight shots when he birdied the first hole, but Bartlettt experienced his first real struggles of the tournament with a double bogey on No. 4. A bogey followed after that, but Bartlett received some heady advice.

“As my 8-year-old son reminded me early on after that, ‘Be glad you got a big lead,’ ” Bartlett said with a laugh. “From there, it was just don’t make any dumb mistakes because, as you play each hole, it becomes harder for them to catch up.”

No one could mount a charge, as the best any challenger could do was an even-par 72 by Trujillo that allowed him to take second place. It was the third straight year Trujillo finished in the top three, with a pair of runners-up in that span.

While Bartlett nursed his lead, Santa Fe’s Chanet Fiorina simply continued her run of playing steady, consistent golf. She was as golden as the Nike Blazer golf shoes she wore on the final day, as a 1-over 73 augmented her even round of 72 at the Santa Fe Country Club on Friday and a 2-over 74 at the Club at Las Campanas to give her a second city title in the last three years in the women’s flight.

She, too, held a large leading going into the final round, leading second-place Shanelle Tafoya by six strokes. Fiorina’s third round was the best score of the day and she beat Tafoya by nine strokes. Fiorina said she played more tournaments this year, which is a change of the previous summers, and she’s in the running to qualify for a spot on the New Mexico team for this year’s USGA State Team Championships at the Club of Las Campanas in late September.

“They have another match-play tournament in Las Cruces next week that I am thinking about going to,” Fiorina said. “Trying to qualify, that’s my goal.”

Fiorina also saw a change in her performance when she learned to slow down on the golf course. Fiorina said she is much more patient than she was before, and it has helped her be more consistent in her play.

“I’m sensing a lot of improvement in my game and my consistency, just focusing on my breathing and my mental game,” Fiorina said. “Just taking my time to really slow down because I noticed that I like to get into a rush. All of that anxiety builds, so all of that breathing and slowing down really helps me.”

Of course, nothing helps ease anxiety like a big lead.