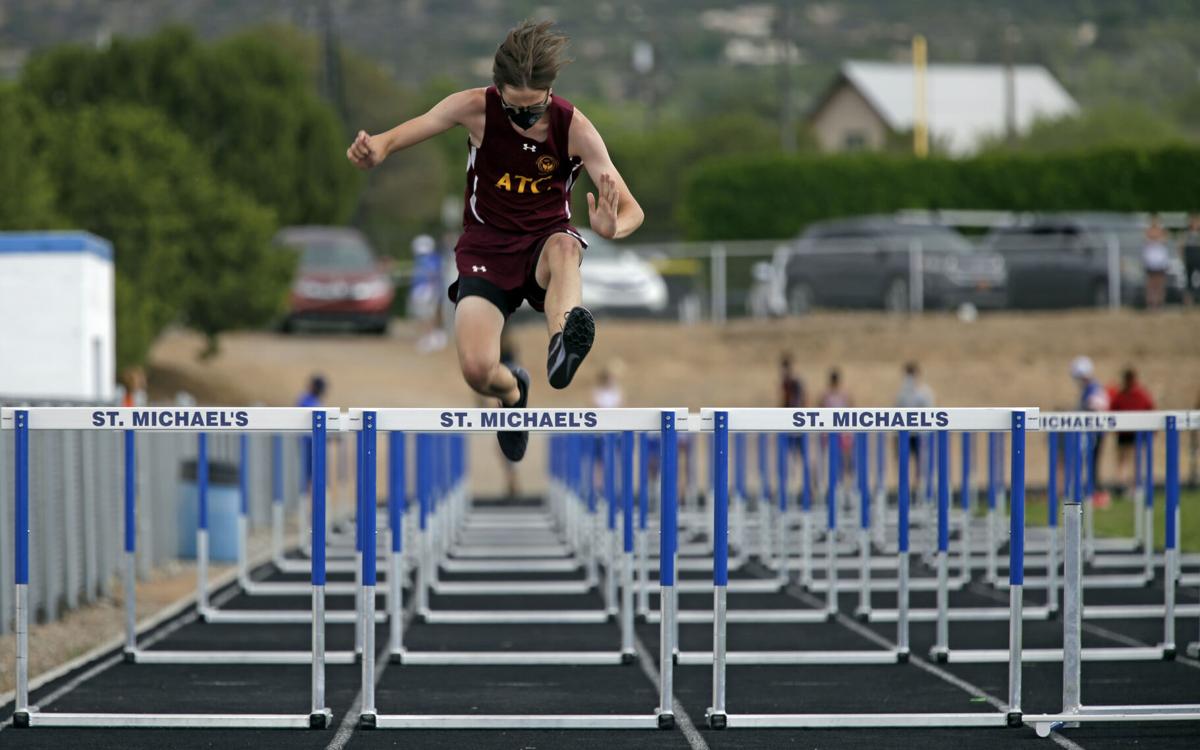 The Academy for Technology and the Classics’ Calder Evans runs the hurdles Friday at a track and field meet at St. Michael’s. 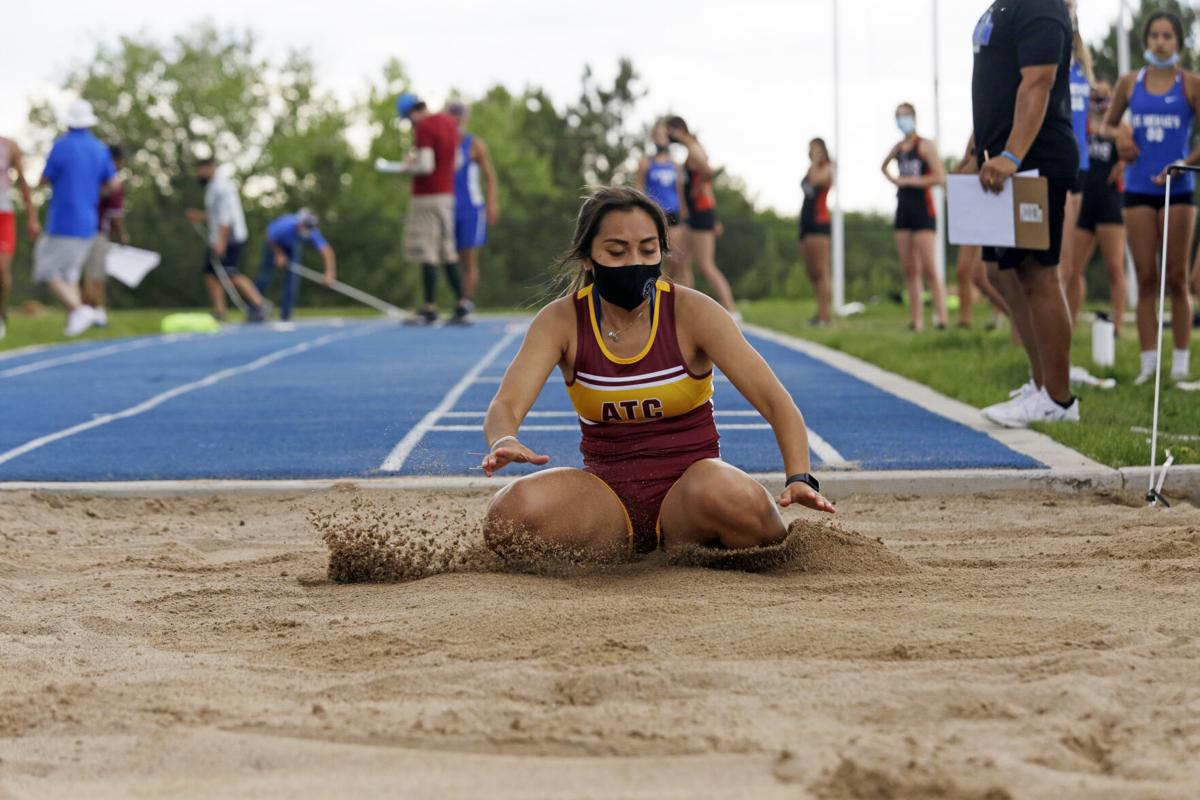 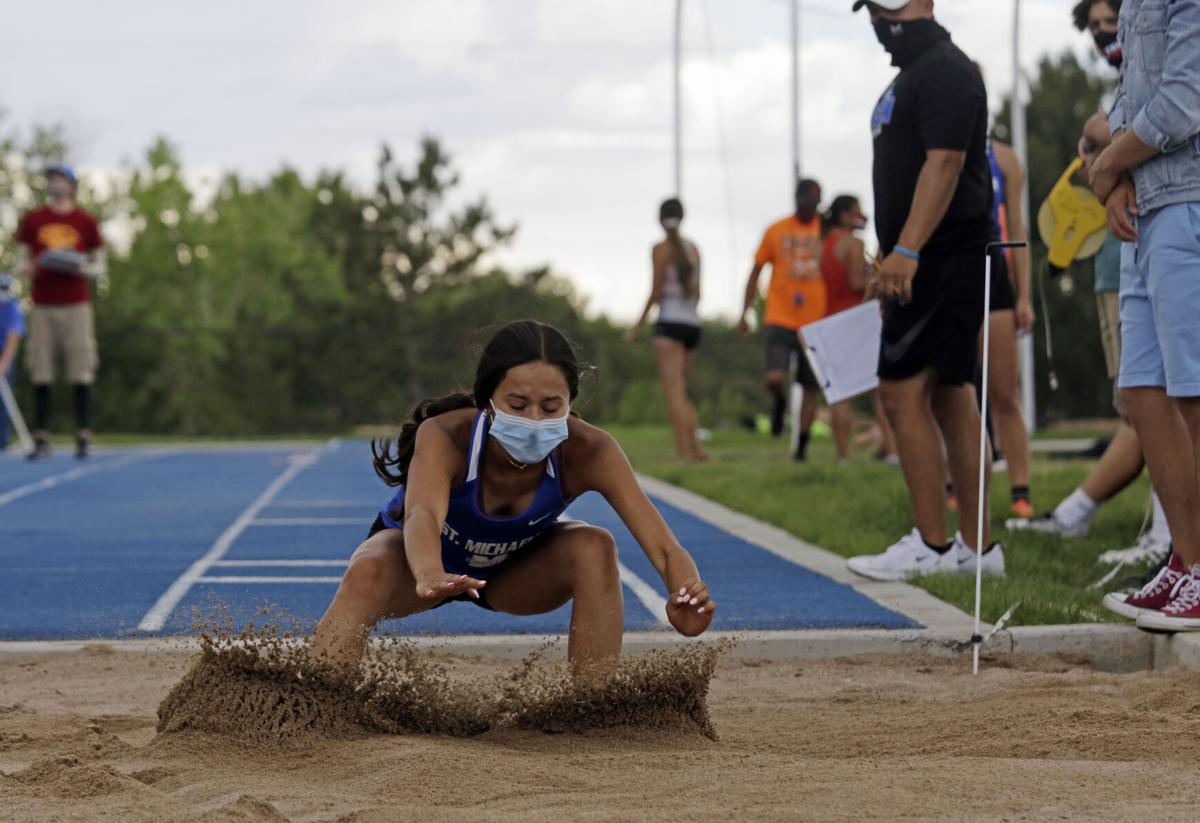 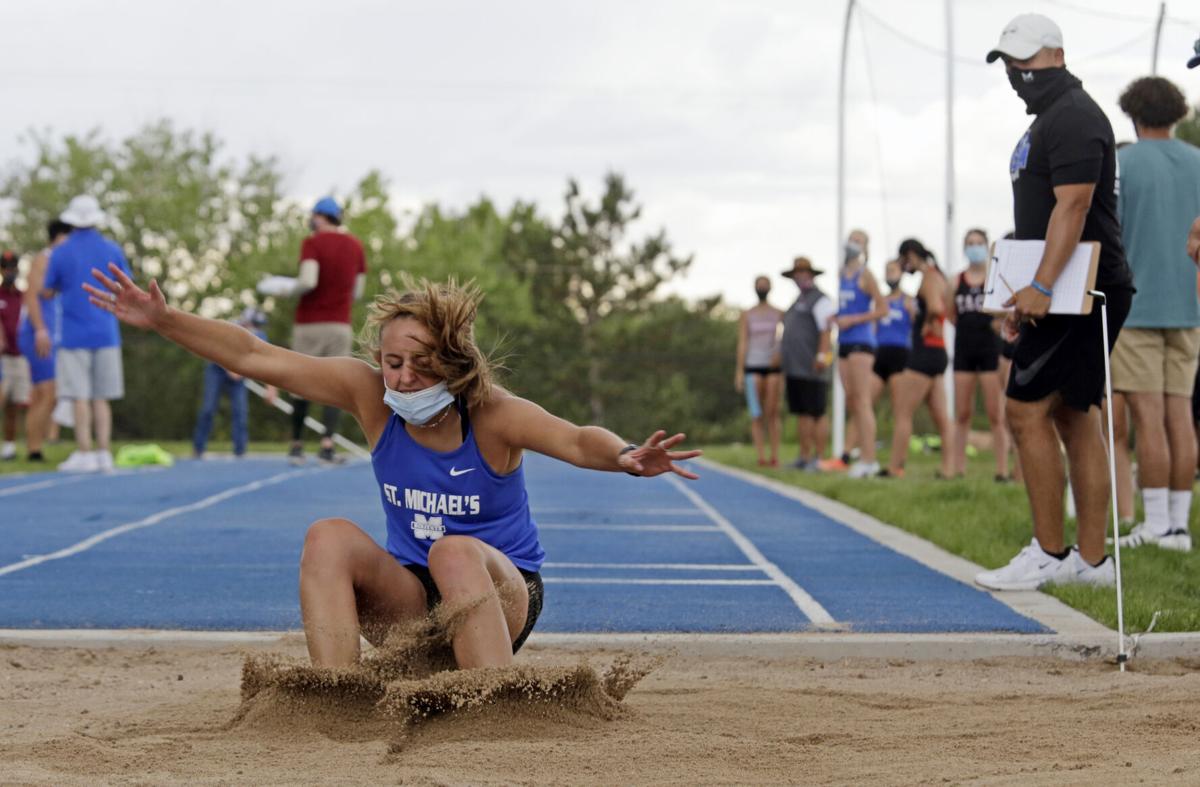 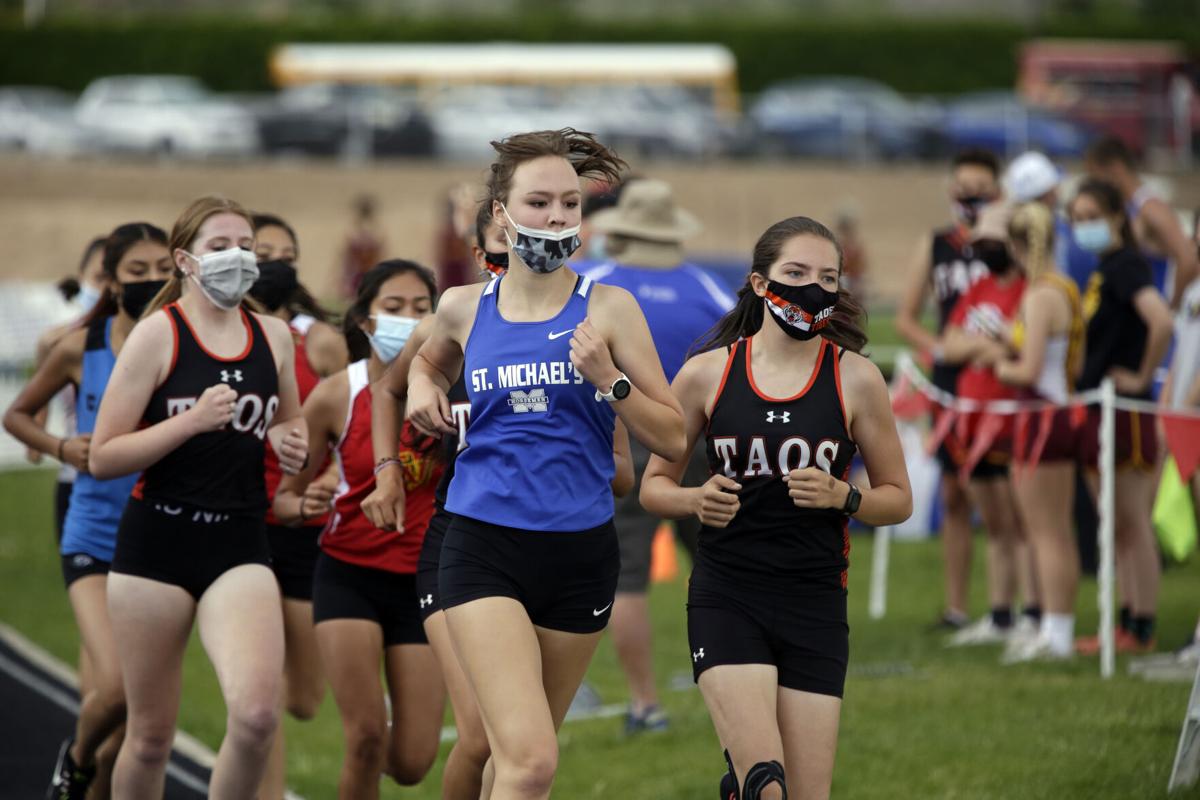 St. Michael’s Logan Hunt runs in the 1600-meter event Friday at a track and field meet at St. Michael’s.

The Academy for Technology and the Classics’ Calder Evans runs the hurdles Friday at a track and field meet at St. Michael’s.

St. Michael’s Logan Hunt runs in the 1600-meter event Friday at a track and field meet at St. Michael’s.

A website is the holder of dreams for hundreds of track and field athletes across New Mexico, and it’s a scenario that has played out every week for the past two months.

They check the MileSplit New Mexico track and field site at the beginning of every week to see if their times and distances are in the top 16 of their respective events, which means they are in the running for qualifying for the state track and field championships later this month.

But they also have to meet the provisional qualifying standard in each event for each class set by the New Mexico Activities Association. Athletes who can check both of those boxes off their list can breathe a sigh of relief. Those who don’t take a deep breath and get back to work at practice and meets.

“My goal is to get into one race, top 16, so I can go myself,” said Calder Evans, a senior hurdler and runner for Academy for Technology and the Classics who will be a part of the team’s 3,200-meter relay team.

Evans is trying to qualify individually in the 110 and 300 hurdles, but has the 19th-best time in the former event and sits 20th in the latter. It would be his first time qualifying individually and he said it would be a capstone to his prep career.

It’s a very different world track and field competitors are dealing with, compared to years past, and they can blame the coronavirus pandemic for it. Prior to the pandemic, the normal qualifying path for runners, jumpers and throwers was to meet the qualifying standard in their respective events or finish in the top two at the district meet.

The pandemic threw in a roadblock to qualifying for the state meet this season. The NMAA limited fields to a maximum of 16 competitors in each event, as well as qualifying based on provisional minimum time and distance standards. They were done to limit the number of participants at the state meet amid the pandemic, while also accounting for the loss of time athletes have to prepare and compete in track and field since many of them are also competing in other sports.

Ceciliana Ruiz, a freshman at St. Michael’s, went from volleyball to basketball to track and field in the span of six weeks. This is her first experience as a varsity track and field athlete, but said the transition from one sport to the next has not been as difficult as she imagined. Ruiz should make it to state in the javelin, where she is sixth in Class 3A girls, but is battling to make it in the long jump. She sits 17th in that event.

However, coaches are split trying to keep those competitive juices flowing while not risking injury in the process. The lack of time coaches have had with their athletes this season led them to be more creative in their training and conditioning programs. Pecos coach Patrick Ortiz said he has been careful not to overload athletes with intense workouts until recently, so that they could get into shape for the season.

However, Ortiz said 80 percent of his boys track athletes make up the baseball team, so the two programs split practice times with them.

Ortiz added he still had athletes who were not yet out of season for other sports as recently as last week, when the wrestling team finally finished its season. Ortiz had three wrestlers who came to the school’s own meet, the Pecos Invitational, on Wednesday, including state wrestling champion Derik Ortiz.

“For someone to have their first meet in June sounds crazy,” Patrick Ortiz said. “That’s two weeks before state and a week before districts. We’re just rolling with what we have. It is really a day-to-day or a week-to-week kind of thing.”

Peter Graham, Santa Fe High’s coach, said his athletes who have run track since the April 5 start are only now in ideal physical condition for the sport. Because others are still rounding into shape, he has seen a lot of quadricep and hip flexor injuries as the season progressed.

“Kids have been sitting for a year, and those muscles haven’t been used,” Graham said. “Usually, you have two months or so of conditioning [before the season began to pick up] and we didn’t have that this year.”

He said some of the provisional qualifying marks in Class 5A are higher than from last year (the track season ended after most teams competed in one meet). He pointed to the 400- and 800-meter relay marks for 5A girls as an example. Currently, only seven teams have qualified on time in the 400 relay and just three in the 800 relay.

Graham suggested the top 16 in each event should qualify for state, regardless of time or distance.

“I kinda like that idea,” Graham said. “Colorado has been doing it for a while and it keeps you competitive throughout the year.”

Still, the new format has veteran track athletes who are trying to qualify for their events waiting anxiously for the weekly updates from MileSplit. Xitlally Estrada Perez, a senior runner and jumper for the Academy for Technology and the Classics, said the qualifying process puts more pressure on each meet and every practice to continue to improve.

Estrada Perez, who said she was consistently in the 14-foot range in the long jump as a sophomore in 2019, is struggling to hit the provisional qualifying mark of 13 feet.

“I feel like time is running out and I still have more that I want to improve on,” Estrada Perez said. “I mean, you can still qualify provisionally, but it can change in a matter of a few days.”

At the Horsemen Invitational at St. Michael’s on Friday, Estrada Perez was 10th with a jump of 12 feet, 6¾ inches, which is 5¼ inches short of the Class 2A qualifying standard. By contrast, teammate Itzel Vega took second with a 14-8¼ leap, which will vault her from 17th in the 2A long jump list to a spot in the top 10.

Noelle Good, a junior at Taos, recently began competing in throwing events and quickly vaulted to fifth in the 4A discus rankings and 19th in the javelin. On Friday, she hit the 4A provisional qualifying mark in the shot put with a distance of 27 feet, 1 inch to win the event at the Horsemen Invitational at St. Michael’s. Good said she found the current qualifying system fun because it pushes athletes to consistently compete at a high level.

“Before, it was a weight off your shoulders knowing you had qualified [for state],” Good said. “Now, it’s just stressful. You just need to make sure you P-R [set a personal record] or just being consistent with your throws. I think it’s a good thing because it helps me push myself. I can see where it can get you thinking a lot and overthinking, which can mess with you.”

New Mexico is still one of the very few states requiring high school athletes to wear masks during workouts and competition in June. Yet the rest of the state can go unmasked if they choose, including the fans in the stands and college athletes while competing.

As the weather becomes warmer, it is becoming more difficult for these athletes to breath while wearing the mask. Obviously our powers at be from the governor, DOH and NMAA who claim "its all about the kids" do not work out or run enough in a mask, so they would not know how difficult it is to breathe while training. I have witnessed athletes nearly pass out, or become disoriented during the past 2 weeks while at various track meets due to lack of oxygen combined with the heat. I ask MLG, Sally Marquez (Director NMAA) and Tripp Stelnicki, at what point is enough, enough?