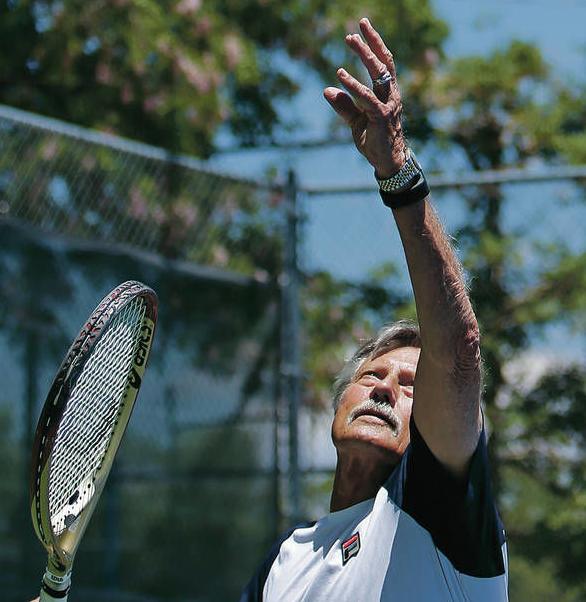 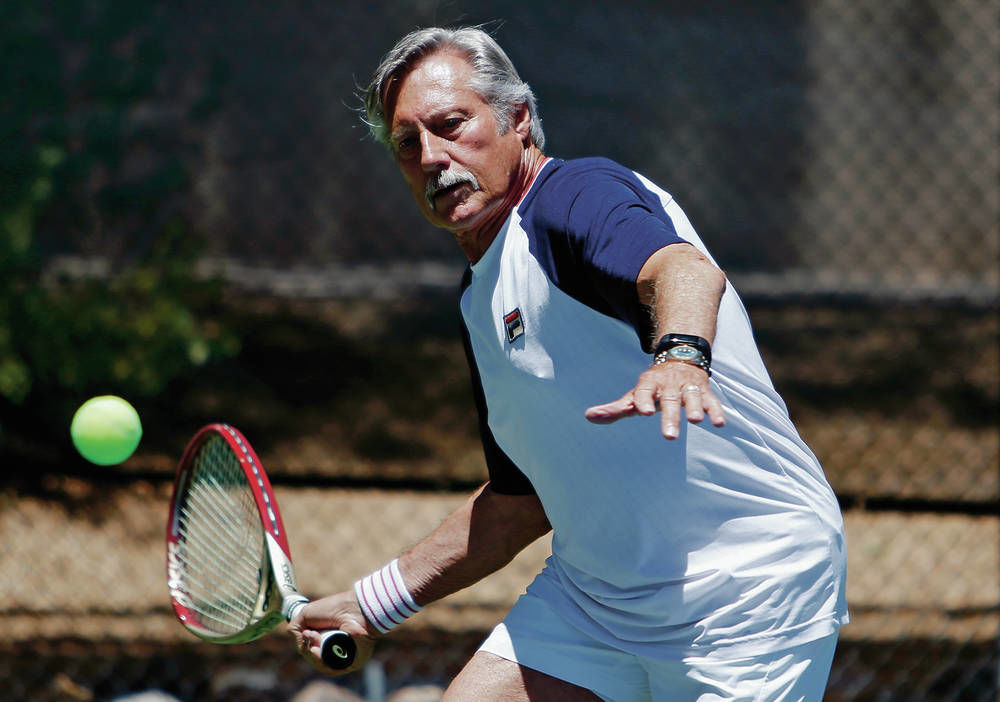 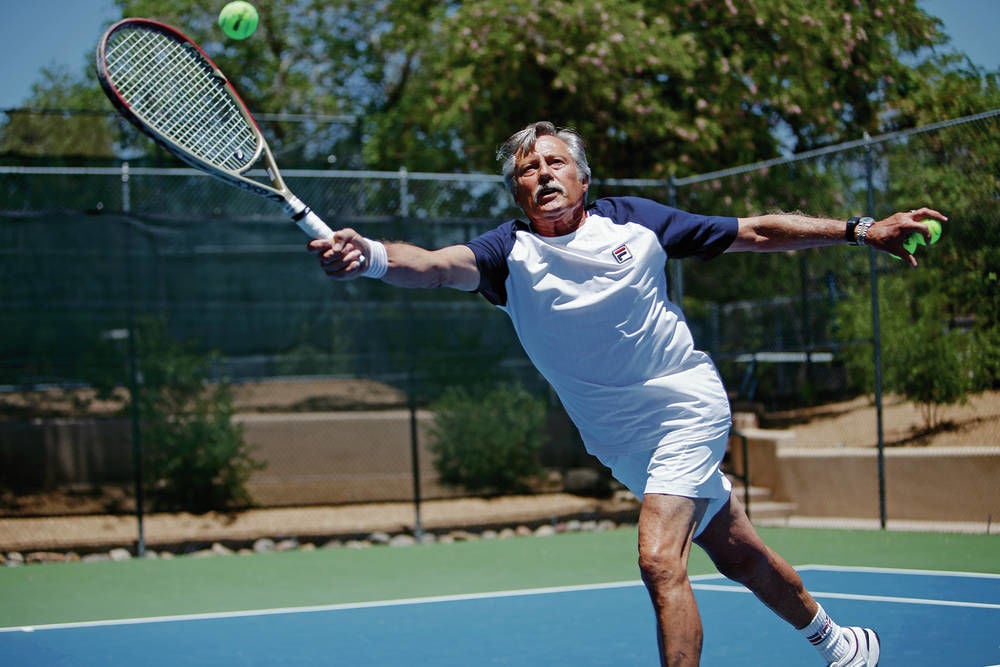 Jimmy Parker has been competing in tennis for more than 60 years. Luis Sánchez Saturno/The New Mexican

Jimmy Parker has been competing in tennis for more than 60 years. Luis Sánchez Saturno/The New Mexican

In a lot of ways, it’s hard for Jimmy Parker to believe he’s still out there swinging his racket and chasing tennis balls.

But here he is, more than six decades into his love affair with the sport and he’s still finding ways to marvel at the relationship he and tennis have cultivated since he stepped onto a court at the ripe ol’ age of 9.

“At this age, I’m getting worse at a lot of stuff,” he says. “But tennis, it keeps me engaged.”

Don’t be fooled. At 74, the Santa Fe resident is one of the best players in the world at his age. This month, he completed a calendar-year Grand Slam, winning the National 75s hardcourt title in both singles and doubles. It followed wins in the national grass and clay court tournaments, and the national indoor title.

He finished the year ranked No. 1 in the United States in 70s singles, doubles and the Super Senior Father/Son rankings after he and his son, Chris, a 46-year-old from Atlanta, won the nation’s top prize.

If that’s not enough, he won the International Tennis Federation’s World Championship in 70s doubles, and this year has already captured titles in the hardcourt mixed doubles and indoor father/son events.

Every win merely adds to the American record for career gold balls, a prize awarded by the United States Tennis Association for winning national championships.

He was also recently named the player-captain for the USTA’s World Cup team that will participate in the ITF World Championship in Croatia in September. His goal between now and then is to accrue enough points to earn a seeding in singles, allowing him to avoid the world’s No. 1 in the opening round.

It’s a stunning list of achievements for a man who still finds himself on a court five or six days a week, if not more.

“I could have never predicted I’d be still doing this at this age,” he said. “I’ve enjoyed the process of coaching and learning the game, always getting better. But, no, I could not have seen myself doing it for an entire lifetime, especially when I was younger.”

Parker, who still sports a thick shock of gray hair and a youthful spring in his step, grew up in St. Louis. Both of his parents were accomplished, yet self-taught tennis players whose greatest advice was to learn by watching others, not them.

“I came from kind of a tennis gene pool, but they both had nonconventional strokes and they always told me not to copy them,” he says.

St. Louis was also the home of four players of Parker’s age bracket who went on to worldwide acclaim. Three, Chuck McKinley, Arthur Ashe and Jimmy Connors won the men’s singles championship at Wimbledon while a fourth, Butch Buchholz, won the tournament’s boys title in 1958.

Parker’s friendship with Ashe is one that still conjures an emotional response. Ashe moved to St. Louis his senior year in high school, and the two struck up a close relationship while spending the winter months playing indoors at the National Guard Armory. The ultra-fast wood courts gave Parker a tactical advantage during the early years of their college days when Ashe was at UCLA and he attended Rice, but that faded when Ashe took his game to another level as the two got older.

While the rest of the world saw Ashe as the pioneering African-American breaking barriers in a white man’s sport, Parker’s experience with him was different.

“I would absolutely forget that he was black,” Parker says. “I mean, it wasn’t a factor because he’s just a person. These things about the racial stuff just puzzles me in a way.”

Ashe went on to win the 1968 U.S. Open, the Australian Open in 1970 and Wimbledon five years after that. He and Parker remained in touch over the years, celebrating a friendship that remained in tact until Ashe’s passing in 1993.

“There were so many bad things that happened to him,” Parker says, his voice breaking off as tears fill his eyes. “He was such a — everything you ever heard about him, he was the guy — if there was somebody to break the color barrier, he was the guy. I can’t ever say a bad word about him because I never saw anything but excellence from him.”

Parker took a break from tennis in his mid-20s. Drafted into the military during the Vietnam War, he flew C-130s for the Air Force, and had an eye on a career in the private sector as a pilot after his service was up. At the time, tennis was still an amateur player’s game.

“Right during that time, the birth of open tennis was occurring, and I was totally separated from the game,” he says. “During my time in the military, tennis as a living became a viable alternative.”

He took over as the tennis coach at his alma mater, Rice, after he was discharged and began a career in tennis that has lasted to this very day. Most of it was spent in Houston as a private instructor and player.

He has earned enough income in the last 40-plus years to sustain a passion he first developed on the St. Louis courts as a kid. He has crossed paths with some of the game’s best, playing against Rod Laver and being part of the first championship match on the U.S. Open’s stadium court.

“I’ve lost a lot of those, so I guess you can say my tennis career has a lot of footnotes, but also a lot of asterisks,” he says.

It adds up to immeasurable experiences, the kind he loves to share.

“To live a life with tennis in the middle of it all is something I never considered when I was younger,” he says. “Yet here I am.”

As time rolled on, players of his peak era in the 1960s and ’70s faded from the game and saw others pick up the sport later in life. Most of the competition he faces now is made up of players who come from the same time frame but lack a similar experience.

“I’m not even really sure where my motivation comes from,” he says. “I just like playing. It’s a simple as that.”

There have been speed bumps along the way. He’s on his second marriage and has had two major sports-related injuries; a torn rotator cuff and a knee replacement. He’s not as fast as he used to be, but he still has the uncanny ability to put the ball pretty much anywhere he wants.

He credits 40-plus years of yoga for keeping him nimble enough to make a difference on the court.

“But as I get older, it gets easier and easier to find someone able to kick my butt,” he jokes.

Up next is a tournament in early June in Canada, one of about 10 to 12 events he plays every year. His favorite surface is grass even though the nearest grass court he knows of is in California.

“Every time I play on grass, it’s like coming home,” he says.

He spends a good portion of his time these days at the Santa Fe Tennis & Swim Club, hitting balls every Friday on King Arthur’s Court just outside the pro shop. He’s been visiting the club on and off since the late-60s, having called the City Different home since retiring here a decade ago.

“I started visiting Santa Fe every now and then just to escape the Houston heat,” he says. “Tennis isn’t a big sport here. I’ll be the first to tell you that. It’s a beautiful game and I’m happy to be a part of it no matter where I call home.”