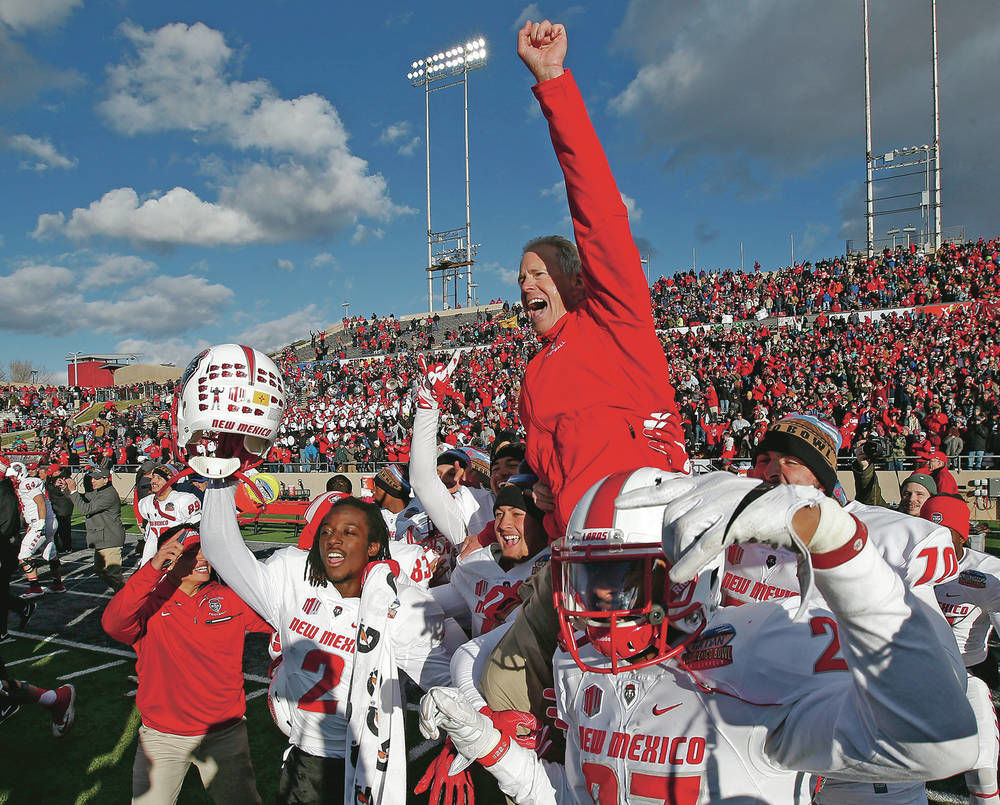 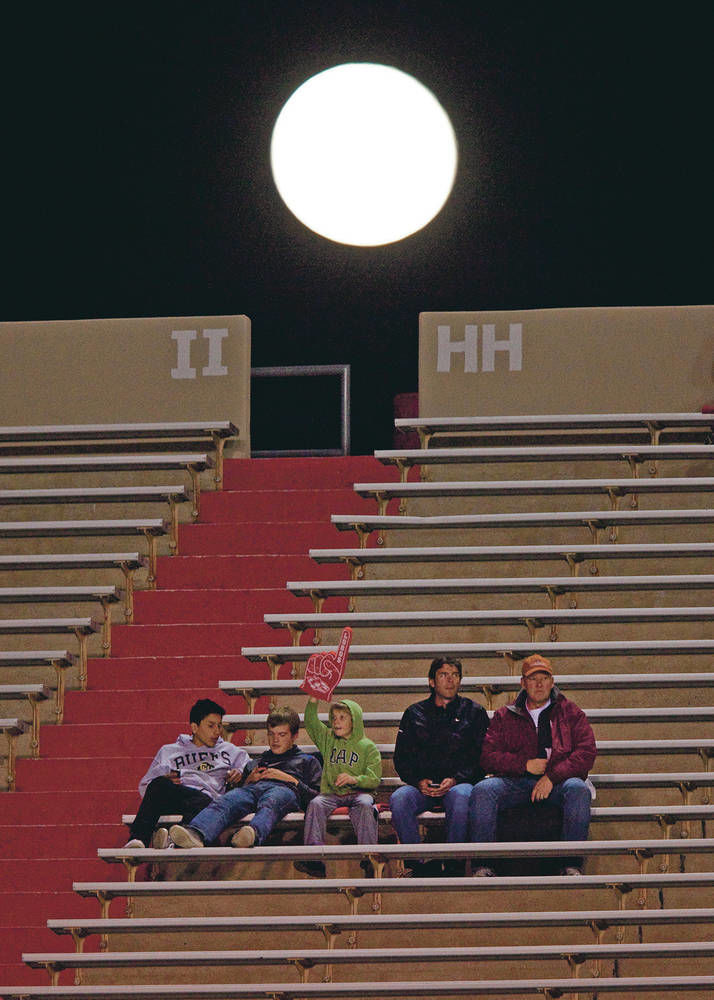 The moon rises as a few UNM fans watch the final minutes of a 45-10 loss to Utah State in 2013 in Albuquerque. Eric Draper/Associated Press file photo 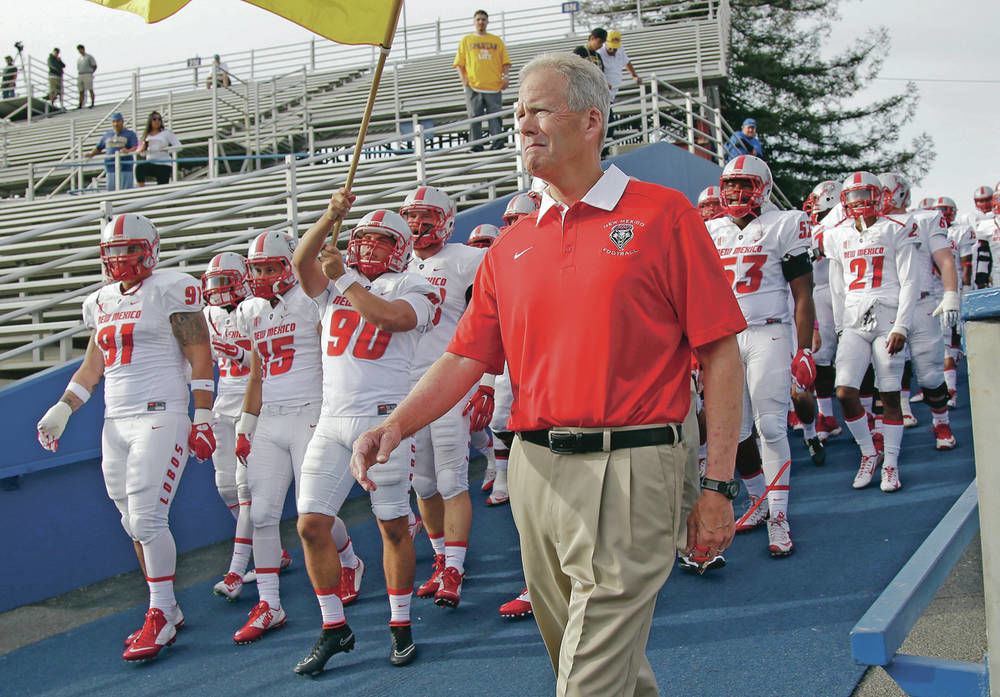 UNM head coach Bob Davie leads the Lobos onto the field in 2015 at face San Jose State. Rare was the occasion when Davie would go through a week or two at UNM without bringing up Notre Dame. Marcio Jose Sanchez/Associated Press file photo 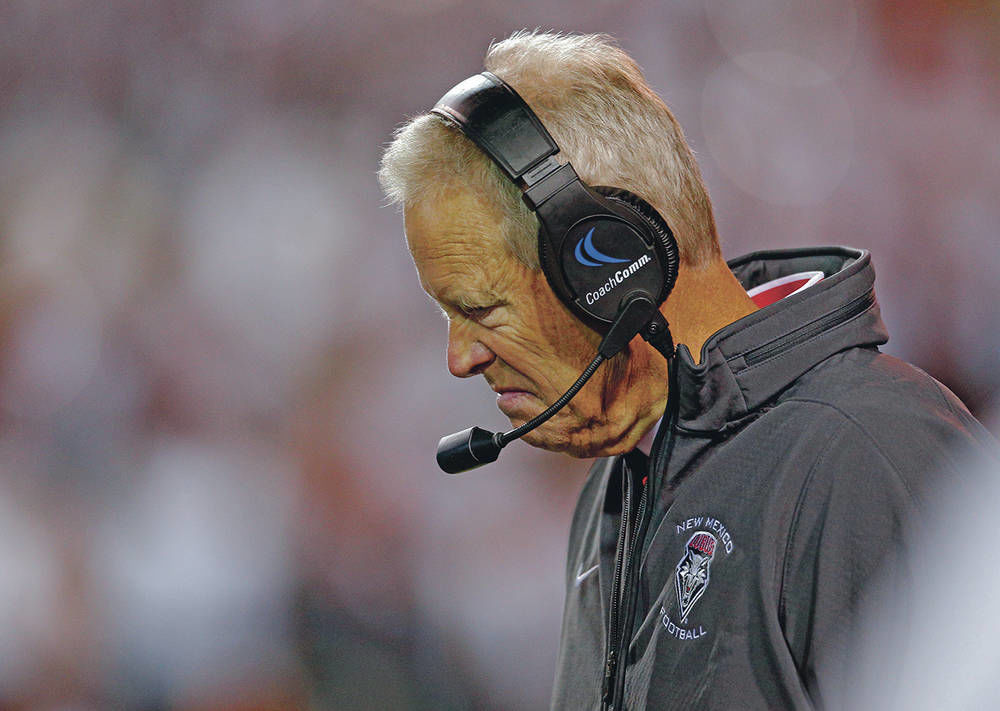 The moon rises as a few UNM fans watch the final minutes of a 45-10 loss to Utah State in 2013 in Albuquerque. Eric Draper/Associated Press file photo

UNM head coach Bob Davie leads the Lobos onto the field in 2015 at face San Jose State. Rare was the occasion when Davie would go through a week or two at UNM without bringing up Notre Dame. Marcio Jose Sanchez/Associated Press file photo

An argument can be made that the game has passed him by, that he’s an old man who no longer has the ability to connect with millennials born nearly half a century after him.

You could say that his stubbornness cost him, that his own ego prevented him from seeing what was obvious to everyone else.

You might even have a point when saying his quirky nature — like saying his favorite app is ‘the texting one,’ and taking solitary walks around UNM’s practice fields listening to music downloaded by someone more technologically savvy than himself — may have been endearing yet glaringly out of date.

As Bob Davie ends his time as the University of New Mexico’s football head coach, his legacy will be of a man who dealt with insurmountable odds in a place that doesn’t particularly care much about the sport; a man who should have exited stage right three years ago but instead allowed his lifelong obsession with seeing things through get in the way.

Fired earlier this week in a move dubbed as a “mutual agreement” to part ways, Davie will coach his last game with New Mexico on Saturday afternoon against Utah State at Dreamstyle Stadium. It ends eight seasons with a program that was in shambles when he arrived and, in all honesty, isn’t that much better off with him heading out the door.

His exit has been hailed as a good thing by scores of fans and boosters on social media, and lamented by the man himself for not stepping down after a wildly successful 2016 season.

It ends eight years of largely losing football that produced six years of at least eight losses and no fewer than five seasons with one or fewer wins in conference play.

“Nobody disagrees that we’ve got to do better, and I think that nobody disagrees that we have to do a better job getting our fan base circled around our program as it’s been in the past,” UNM athletic director Eddie Nuñez said. “Coach Davie agrees. We’ve seen success here. We’ve had some of the greatest players in the NFL and college play here. There is an opportunity to be extremely successful here.”

The Lobos peaked in the middle of Davie’s tenure, bookending six long and painful losing seasons with two of the best in university history. They won 16 games between 2015 and 2016, captured a share of a division title in the Mountain West Conference and went to two straight bowl games behind a triple-option offense that was among the nation’s best in rushing and explosive plays.

On Saturday night, Davie will exit his office in the Tow Diehm Facility for the very last time, likely never to step foot again in a place that never loved football the way he did.

“I’d been at ESPN 10 years,” Davie said this week. “To get the opportunity to be a head football coach again at a Mountain West Conference level; I’m the luckiest guy in the world.”

Hired out of the broadcast booth by former UNM President David Schmidly and former athletic director Paul Krebs, Davie was a name-brand personality whose career stalled at Notre Dame after taking over for longtime mentor and friend Lou Holtz. His 35-25 record was nowhere close to the expectations of Fighting Irish football.

Notre Dame fans came to dislike him for some of the same reasons he was never fully embraced at UNM; by constantly referring to his previous stop to make analogies that fit his current situation.

Rare was the occasion when he would go through a week or two at UNM without bringing up Notre Dame. While the stories were entertaining, they made some question where his heart was and whether he was fully immersed in the culture of Lobo football.

“I was a head coach at another place under some very difficult, much brighter lights on a bigger stage,” Davie said. “I’m pretty good at narrowing the focus. I’ve got pretty good mental toughness.”

While his résumé prior to UNM wasn’t exactly a best seller, his squeaky clean track record was the ideal fit in the wake of the disastrous Mike Locksley tenure from 2009-11. Locksley’s Lobos had been slapped with probation that cut scholarships and left an ugly stain on a program that had lost 37 of its previous 40 games.

“It wasn’t any one person that caused that situation,” Davie said. “I understand the totality of this job from top to bottom, but I am very proud of what we have accomplished here, and only I will know — and some of those early coaches that were here with me.”

His start with the Lobos was a good one. They debuted a new artificial turf field for Davie’s first game in 2012, a blowout of Southern before a crowd of nearly 30,000 fans. His first seven games produced four wins, including a 35-23 victory in Hawaii that put UNM above .500 for the first time in five years.

That early stretch was punctuated by a second-half rally that fell just short in a 32-29 loss to nationally ranked Boise State.

“There’s been some — I don’t want to say magical, that’s too strong — there have been some unbelievable moments here,” Davie said.

His fourth season is when it all came together. The Lobos went 7-6 to earn a trip to the New Mexico Bowl. The sixth win that gave them bowl eligibility came in a shocking upset on the road at Boise State, a breakthrough that served as the high-water mark in Davie’s time at UNM.

The Lobos went 9-4 in 2016, returning to the New Mexico Bowl to beat UT-San Antonio for just the second bowl victory in the previous 55 years.

From there began a rapid decline in nearly every aspect of the program. The Lobos have won just eight games in the three years since then and a loss Saturday would give them their first winless record in conference play since 1990 when they were still in the Western Athletic Conference.

“We’ve had some challenges this year, things that probably no program in America has had to experience,” Nuñez said, referencing several off-field incidents that ranged from a player’s suicide to the suspension of the starting quarterback, as well as a heart attack Davie had after the season opener and enough injuries to eliminate one-fourth of the roster after 10 games.

Attendance and fan apathy are certainly part of it, as well. The Lobos have failed to draw 20,000 fans in 26 of the 50 home games Davie has been head coach, including three games under 14,000 this season. Saturday’s finale has a buy one-get one free promotion for ticket buyers in what amounts to a Hail Mary attempt to bolster attendance figures.

Whomever the next coach turns out to be, Davie said he’d be more than willing to give his successor a tutorial on how things work. Wherever he is, be it the broadcast booth or the sidelines of another team, he’ll always leave a line open for the man who replaces him.

“I would tell that coach to call me if he wants my advice and, quite honestly, he probably doesn’t need my advice,” Davie said. “But if he does, call me and I will do whatever I can to help him be successful here.”