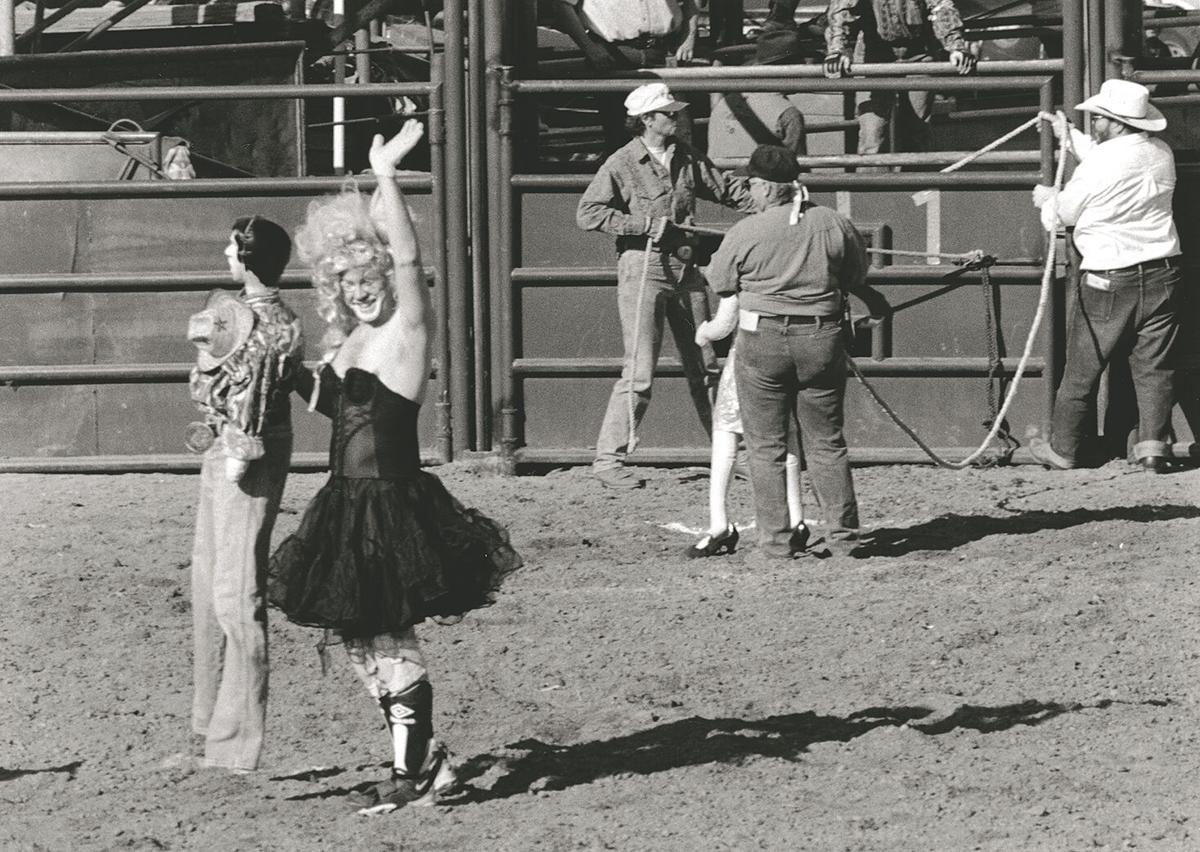 The Wild Drag Race,  courtesy of the Palace of the Governors Photo Archives (NMHM/DCA), HP.2008.26.2 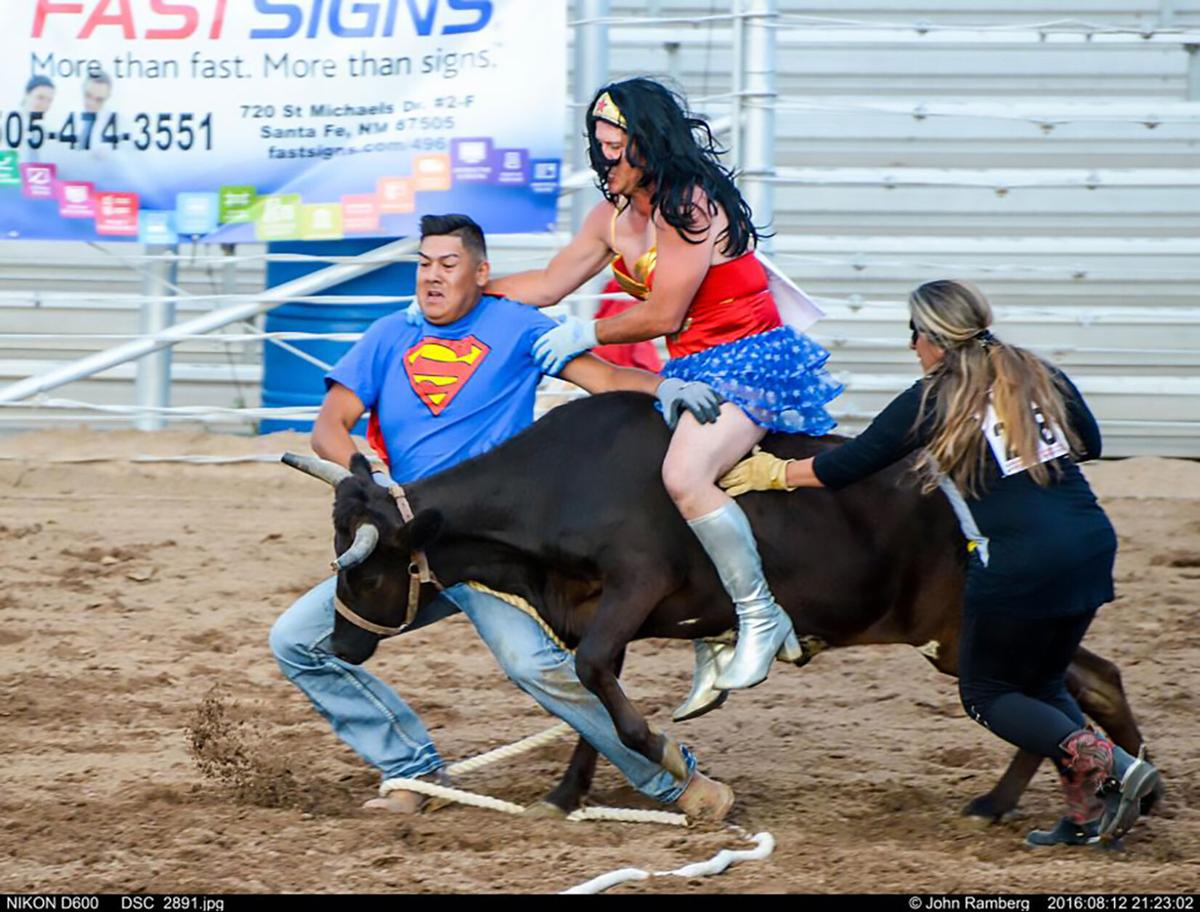 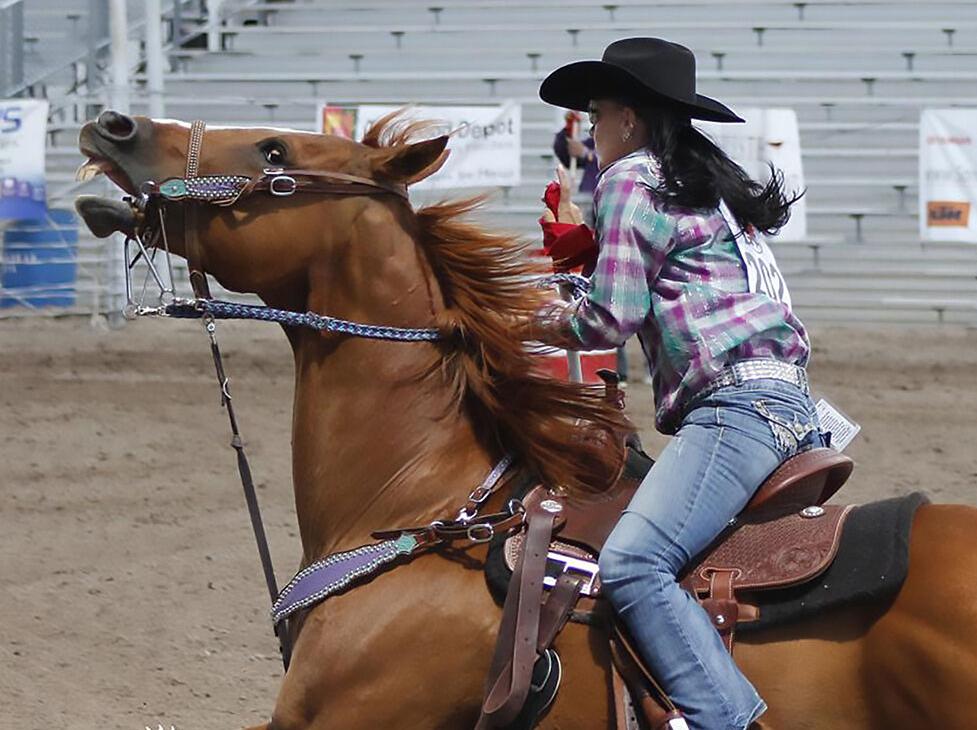 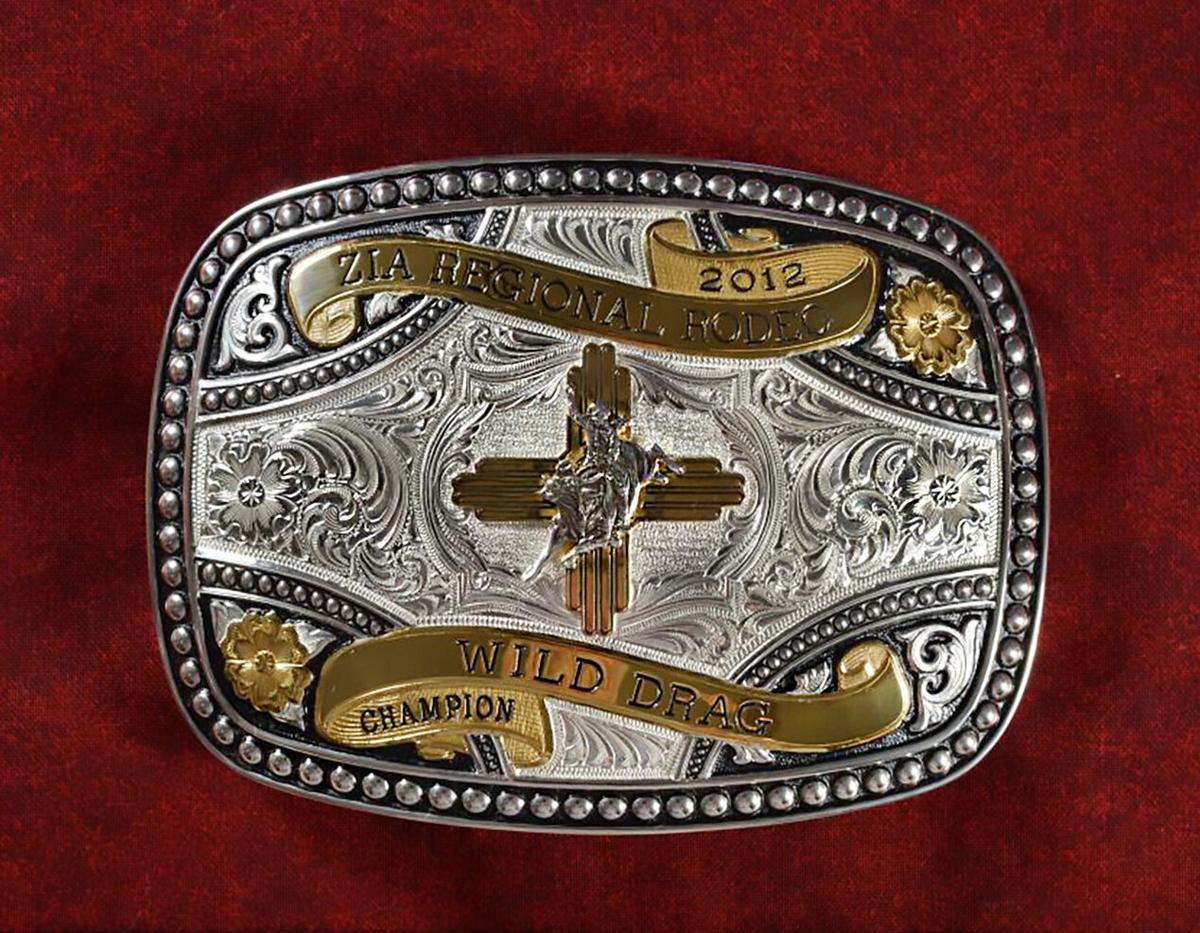 The Wild Drag Race,  courtesy of the Palace of the Governors Photo Archives (NMHM/DCA), HP.2008.26.2

In the wild drag race, a fan favorite at the Zia Regional Rodeo, a cowgirl, a cowboy, a man or woman in drag, and a steer compete in an entertaining but serious event. When the chute opens, and the steer comes out, the three attempt to direct or harass the steer toward the finish line 70 feet away, where the person in drag mounts it, and tries to ride it back across the line.

You’ll only see a drag-mounted steer at a gay rodeo, but don’t think for a second that such an event is just for laughs. The drag is in imminent danger of getting bucked the moment that steer is mounted.

The Zia Regional Rodeo, New Mexico’s only gay rodeo, is an associate member of the International Gay Rodeo Association, which is composed of numerous member associations throughout the United States and Canada. If you’ve never heard of a gay rodeo, the very idea might sound like fun and games. And events that come under the general category “camp,” such as that wild drag race, are just that, but they’re also difficult work. These include wild cow milking (a man, a woman, and someone in drag attempt to milk a wild cow) and goat dressing, which is a timed event in which two people dress a goat in underwear, then race back to a finish line in the hopes the underwear stays on the goat for the duration. But several events common to professional rodeos, like calf roping and bull riding, offer participants opportunities to really test their mettle.

“Ours is an amateur rodeo, but there are some really serious competitions, mainly in the horse events, like pole bending and the barrel race,” Taylor says. “These guys are super competitive, and they do compete in the professional rodeo circuit. Conversely, we do have folks from the professional circuit competing in ours.”

This year, the annual event takes place on the grounds of the Rodeo de Santa Fe from Friday, Aug. 27, through Sunday, Aug. 29. In conjunction with the rodeo, the Gay and Lesbian Rodeo Heritage Foundation (gayrodeohistory.org/foundation) hosts an exhibition of artifacts, memorabilia, artwork, and photographs in the concession building of the rodeo grounds. They reflect more than 40 years of gay rodeo history. It includes trophy buckles awarded to the finest competitors, going back to 1981, which are proudly displayed on their belts, as well as posters, programs, and ribbons.

Participants register on day one, but the exhibit will be open to the public, and an evening of entertainment, beginning with a 7 p.m. country dance, takes place on site. Rodeo competitions begin in earnest on the morning of the 28th.

Now an international phenomenon, the gay rodeo began as a one-time fundraiser in Reno, Nevada, in 1976, and its founder, Reno native Phil Ragsdale, faced a lot of opposition to getting it off the ground. Ragsdale, who died of AIDS in 1992, came up with the idea for the event the year before, soon after he was was the crowned Emperor of the Comstock Empire Silver Dollar Court, a Reno-based advocacy group for the LGBTQ community. His intention was to mount the rodeo as a Thanksgiving Day fundraiser for local senior citizens. It took a year of planning. There were protests from evangelical groups, who were opposed to the idea of a gay rodeo, and Ragsdale couldn’t find local animal traders willing to provide the necessary horses and cattle for the event. (He ended up using range cows and calves, a wild pony, and a pig.)

Ragsdale’s response was to simply ignore them. He wanted to show that a gay rodeo was an arena where men and women risked their necks like the pros — despite stereotypes of gays as weak and effeminate. And they could be just as tough and gritty. The rodeo became an annual event and inspired similar rodeos across the country.

“The exhibition that you’ll see will be on the history of all gay rodeo from when it started back in Reno,” Taylor says. “It will include some New Mexico stuff, because we are one of the earlier associations. It will cover the gamut.”

The New Mexico Gay Rodeo Association was established as a nonprofit in 1984. Its aim is to foster the Western lifestyle in the gay community.

“We produce a gay rodeo every year,” Taylor says. “Next year is our 30th.”

Normally, member associates of IGRA hold about a dozen rodeo events across the nation throughout the year. The global pandemic put a damper on public events in 2020 and 2021, and this year, there’s only three. In addition this month’s Zia Regional, the Rocky Mountain Regional was held Colorado in July, and the BigHorn Rodeo in Nevada will take place in September. The rodeo season concludes with an IGRA-produced finals rodeo, which is held in October.

“As you compete, you gain points. If you have enough points, you’re invited to go to the finals. It’s the culmination of the year’s work by the contestants, and it’s a lot of fun.”

About 60 to 70 contestants participate in the Zia Regional annually. Due to COVID, only 37 contestants are pre-registered this year, Taylor says, but he’s expecting about a dozen more to sign up before the event.

Today, the gay rodeo doesn’t face the opposition that it once did. In New Mexico at least, most of the rodeo protests are of another nature entirely.

“The only pushback I get, especially in Santa Fe, is from people saying ‘Oh, rodeos are cruel to animals,’ and all that,” Taylor says. “That’s kind of prevalent, but it’s not so much the gay aspect. The International Gay Rodeo Association is different from the pro rodeo in how we treat our animals. We have a huge focus on animal safety. We have rules built into our bylaws that address animal safety and cruelty. If we see any cruelty at our rodeo, whoever’s responsible for that will be expelled and fined heavily. We don’t want our horses, steers, bulls, and goats to be mistreated.”

“The amounts we give back depend on how well we do,” Taylor says.

The real struggle for the Zia Regional Rodeo is audience attendance, particularly in Santa Fe, where they may only get 100 people in the stands.

“It’s all about getting the word out, because a lot of people have never heard of a gay rodeo.” ◀

▼ Social distancing and masks required in all common areas; nmgra.org/rodeo/SupportFiles/2021-COVID-19.pdf