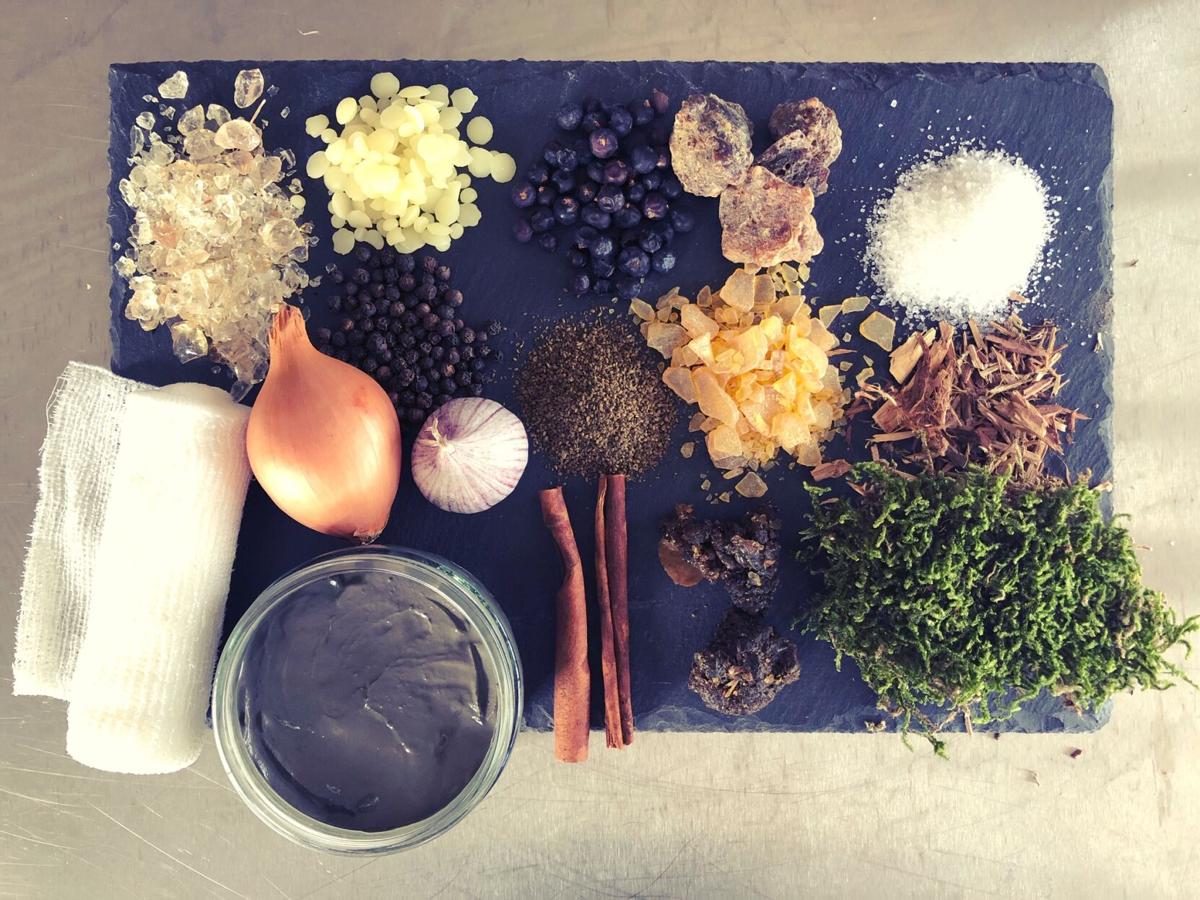 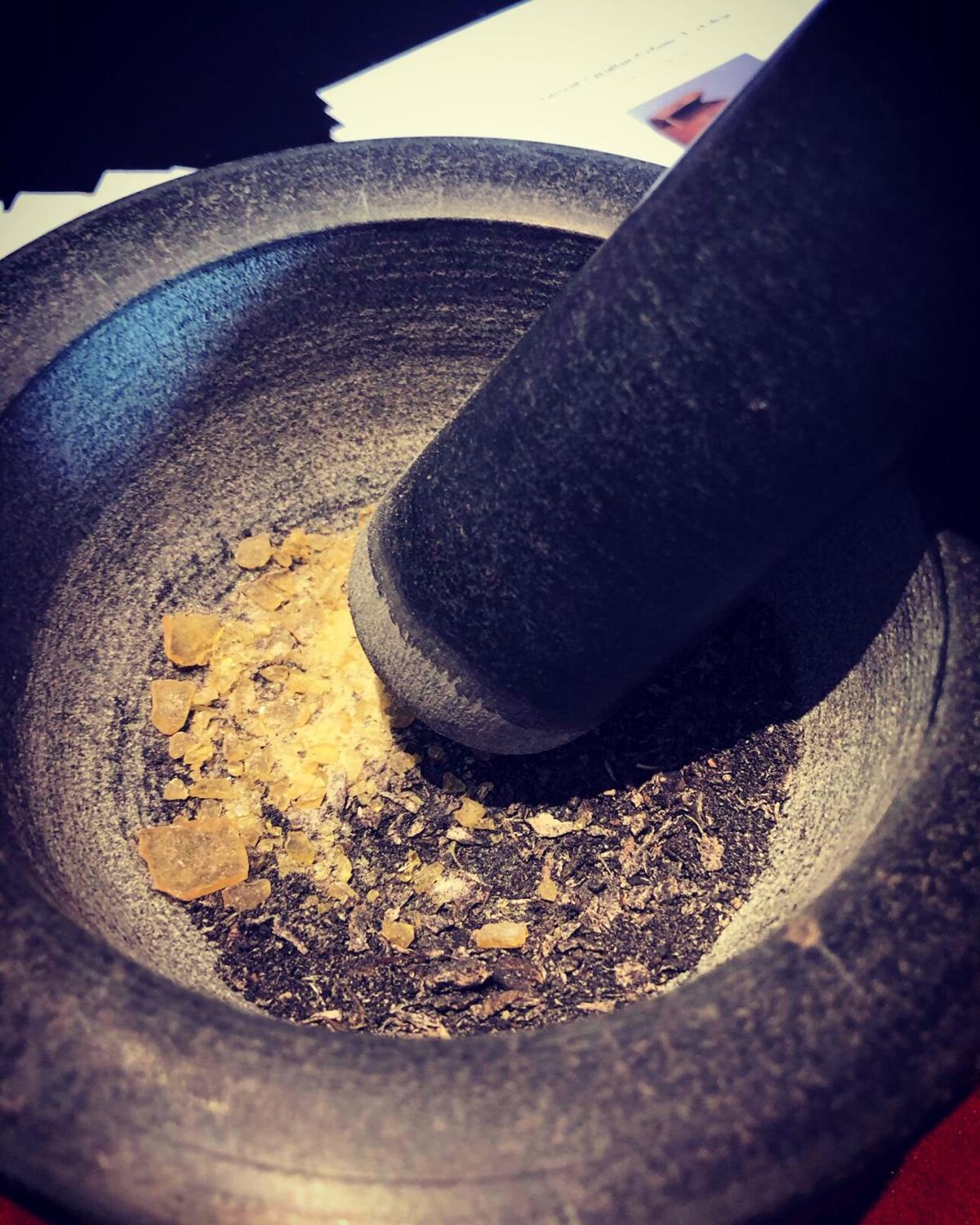 To make kyphi, pine resin, Pistacia resin, and juniper berries are ground together in a mortar and pestle; photo courtesy Dora Goldsmith 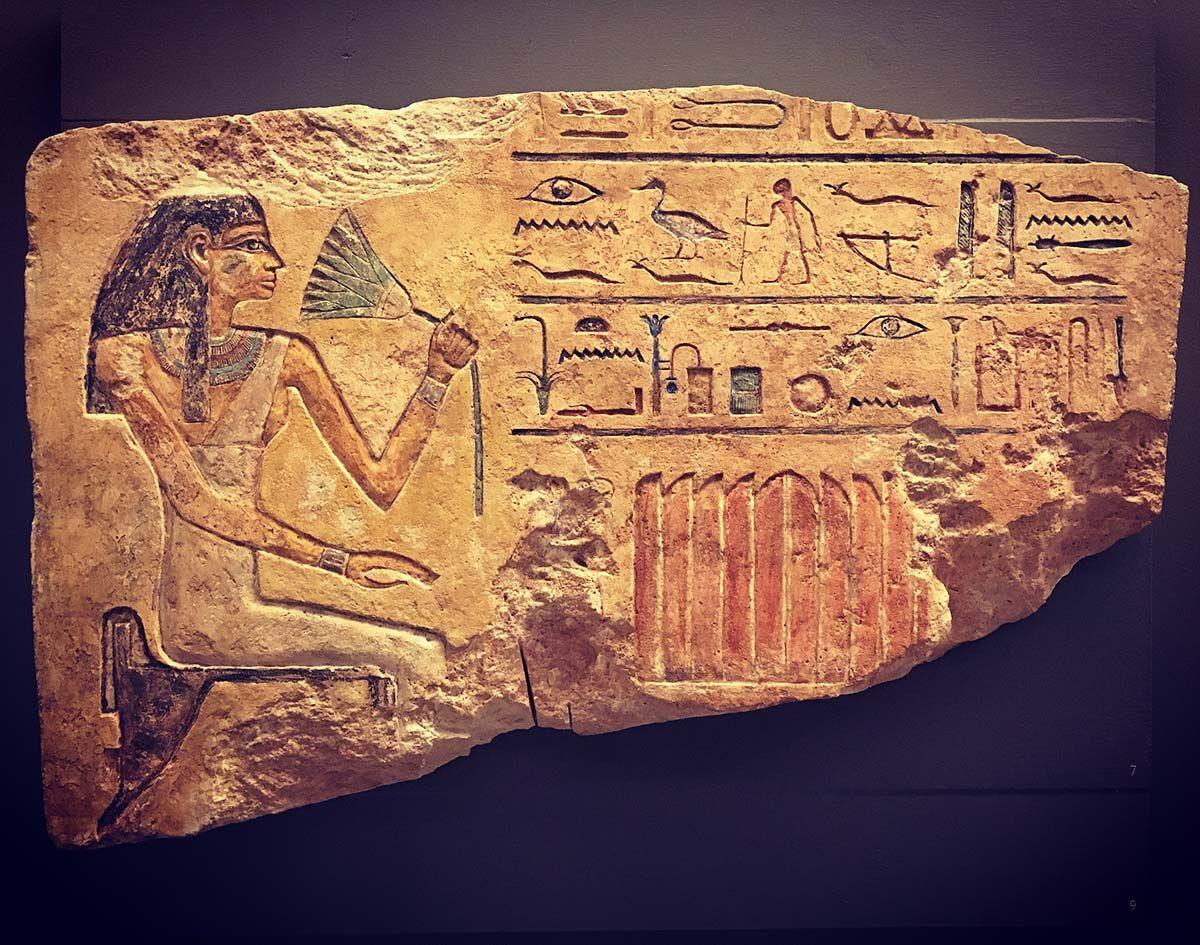 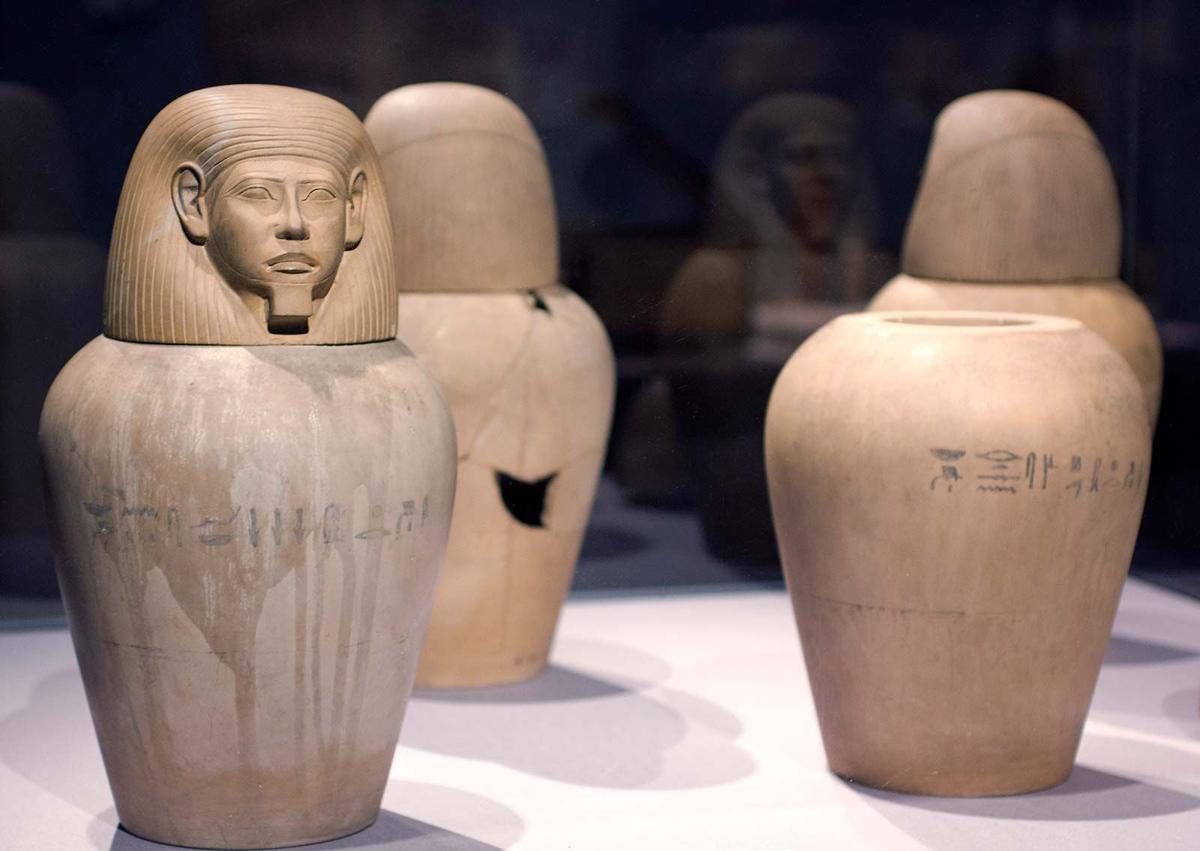 Canopic jars like these were used by the ancient Egyptians during mummification to store and preserve the viscera of the deceased. Four jars were used: one for the stomach, one for the intestines, one for the lungs, and one for the liver. The heart, which they considered the seat of the soul, was left in the body. Photo courtesy Roxana Villa.

To make kyphi, pine resin, Pistacia resin, and juniper berries are ground together in a mortar and pestle; photo courtesy Dora Goldsmith

Canopic jars like these were used by the ancient Egyptians during mummification to store and preserve the viscera of the deceased. Four jars were used: one for the stomach, one for the intestines, one for the lungs, and one for the liver. The heart, which they considered the seat of the soul, was left in the body. Photo courtesy Roxana Villa.

What an Egyptian mummy smells like may have never crossed your mind. But, depending on the period to which the mummy dates, you might be surprised. Imagine how some combination of pine, cedar, juniper, celery seed, and myrrh would smell, particularly in a well-preserved specimen from the New Kingdom (1550 BCE-1077 BCE), when the art of mummification reached its greatest degree of sophistication. So skillful were the embalmers that, even after millennia, some mummies still retain the aroma of the ingredients used to preserve them.

“It’s such a pure scent,” says Egyptologist Dora Goldsmith, a researcher at the Free University in Berlin, Germany. “These ingredients serve to purify the body. Resins used in mummification — pine, cedar, myrrh — have strong antibacterial properties and they kill microorganisms that would cause the body to rot and stink. And they smell wonderful, too. Sense of smell seems to be something extremely important in ancient Egyptian culture.”

Goldsmith’s focus is on the cultural significance of the sense of smell, which was an undeveloped area of research when she first broached the topic in 2011 for a research paper. When she began investigating it, she didn’t know how vital the component smell would be to ancient Egypt’s social hierarchy. “What I found was that it has everything to do with it,” she says. The research paper became a master’s thesis. Then it became the subject of her entire Ph.D. project.

“They used the sense of smell to communicate: ‘I’m above you in the social hierarchy’ or ‘I’m stronger than you’ or ‘I’m victorious’ or ‘I am attractive’ also — all sorts of things. They used it as a tool to say something about themselves. I think that they were closer to nature than we are, and they probably noticed that, in the animal world, olfactory communication is very important.”

By way of example, she says the smell of roast meat in temples was used to communicate victory over the enemies of Egypt. “The meat roasted on the altars for the gods was identified with the meat of the enemy and the smell emitting from the altar became an olfactory sign of the king’s victory and authority.”

At 11 a.m. on Sunday, April 11, Goldsmith leads the first in a series of seven Zoom workshops on the scents of ancient Egypt. Presented through Santa Fe’s School of Lost Arts, the workshop series covers a host of cultural practices related to scents that can be recreated using the specific ingredients and methods of the ancient Egyptians, based on recipes found in papyri and other historic documents and on temple walls. Each participant receives a list of ingredients to gather for the workshops, if they so choose, or they can purchase a kit online (doragold@zedat.fu-berlin.de) when they register. Each kit contains all of the ingredients for recreating a specific scent, like kyphi (pronounced KEE-fee), or a variety of scents associated with a specific cultural practice, like mummification, along with the recipe and instructions for its preparation. For the participants, Egypt comes alive in a tangible way.

The workshops include explorations of scents associated with Egyptian temples, gardens, lovemaking, mummification, and the afterlife — and kyphi, which was used as an incense, a perfume, and even a chewing gum.

“I’ve been giving workshops for three years,” says Goldsmith, who started her classes as a monthly series at the invitation of the Egyptian Museum of Berlin. The workshops arose from Goldsmith’s immersion in experimental archaeology, recreating kyphi as a way to better understand the ancient texts she worked with, which detailed the techniques used for making the perfume. “In a lot of these texts, the words are clear, but it’s hard to understand the entire process. The best way of understanding the logic behind why they did things in a certain way is to get the materials and follow what the texts are saying, step by step.”

Until the coronavirus pandemic started in 2020, Goldsmith’s workshops were in person. Each is about three hours long. Goldsmith lectures for the first hour, then presents the ingredients for each scent she recreates, which she lays out in small piles on slabs of dark grey slate, making the separate components easy to identify.

Her lectures are fascinating excursions into Egyptian culture, which cover not only how certain ingredients were used in a particular context but the greater cultural milieu surrounding them.

“For me, what was really transformative with Dora’s work is that she’s coming at it from such an academic place,” says Roxana Villa, founder of the School of Lost Arts. “That added a whole other dimension to my knowledge and perception. I think that’s happening with the students as well. You can tell how passionate she is, and that passion gets transferred to the students.”

Insight into the social hierarchy of ancient Egypt, which Goldsmith explores in some depth in her lectures, is integral to understanding the role of smell.

“You have to imagine it like a pyramid,” she says. “At the top of the pyramid, there’s a king, who has a divine scent. He’s the only one who can say that about himself or herself. Sometimes the king could be a woman (for example, Hatshepsut, who claimed to be the king and not the queen). She was very instrumental in creating this olfactory hierarchy.”

Some high officials also had perfumes, some of which Goldsmith says were unavailable to the masses. She mentions Rekhmire, a vizier who held the highest rank under the king. A valuable ingredient called ti-Sps (pronounced ti-shepes), which is identified with camphor and had the value of gold and silver, was discovered in his tomb. Some of the high officials were also gifted with fragrant presents, such as a bouquet of flowers and herbs called sTi-SA (pronounced setchi sha), which means “garden scent.”

Near the base of the pyramid are the lower classes. They may be fishermen, or sandal makers, stokers, and smiths. “In the case of the stoker and the smith, they had smoke around them,” Goldsmith says, “and it says in the documents that they were drenched in the stench. And the fishermen are in the swamps with all the fish, and they stink terribly.”

A member of the lower classes might prepare a remedy that includes frankincense, juniper berries, and myrrh to relieve such foul odors, whereas an upper-class residence would smell of kyphi or of garments drenched in camphor oil.

Use of kyphi, however, may have transcended social standing.

“It’s hard to say exactly who had kyphi and who didn’t,” Goldsmith says. “The temples definitely had kyphi for sure. It was also something for the gods. Kyphi recipes are written on the walls inside two temples: the temple of Philae and the temple of Edfu. So, we know that it was used in the rituals. But the kyphi recipe is also written on a medical papyrus, which was intended for everybody’s use. In this medical papyrus, it says that you’re supposed to use the kyphi to cleanse your house and your clothing.”

Kyphi is the subject of the first workshop in the series.

Villa is developing a kyphi perfume using locally sourced ingredients to sell on her website, Illuminated Perfume (illuminatedperfume.com), which features perfumes made from organic raw materials rather than synthetics. She’s also in negotiations to present a kyphi incense-making class at the historic chapel at Bishop’s Lodge in Santa Fe.

“What I’m going to do when I teach that class is bring in some of what I’ve learned from Dora about kyphi but incorporating some of the materials found here in New Mexico, like pine resin and juniper.”

While the workshops are of particular interest to perfumers, the cultural aspects have a broader appeal to anyone interested in learning more about ancient Egypt. The subject of ancient Egypt and the sense of smell is arcane for most of us, perhaps even those with a good grounding in Egyptian culture. But from Goldsmith’s perspective, the evidence that the sense of smell played a vital role in reinforcing Egyptian society is overwhelming. Consistent references to scents and smell can be found on the temple walls and in the ancient papyri.

“Within the aromatherapy world, Egypt is talked about a lot in regard to scent,” Villa says. “In that tiny community, we know it really well but others don’t.”

In her workshop on mummification and the afterlife, Goldsmith shows a limestone fragment, Relief of the Lady Wadjkaues, which dates to Egypt’s Middle Kingdom and is housed in the collection of Boston’s Museum of Fine Arts. In the relief, Lady Wadjkaues, the wife of a nomarch, holds a blue lotus in her left hand. The blossom is turned toward her as though she’s taking in its perfume. Similar pictographs exist throughout the art of ancient Egypt.

“It was one of the most important scents,” she says. “Most of the perfume ingredients in ancient Egypt came from abroad. For example, myrrh, frankincense, styrax, camphor, Pistacia resin, pine resin, and cedar resin were all imported. But the blue lotus came from Egypt, and it had a very strong religious connotation.”

The blue lotus is associated with the god Nefertem, the god of the lotus, who had a connection to Ra, the god of the sun, particularly at sunrise. “The reason for that is that the blue lotus has a very similar cycle to the sun. It goes down at night to the bottom of the lake and comes to the surface in the morning and opens up. So the blue lotus became a sun symbol, essentially, and a symbol of the cycle of life. It has a very pleasant smell, sure, but it’s also a symbol of regeneration. The Egyptians, when they died, they wanted to be a part of that cycle, because that cycle never stops.” ◀

Tickets are $440 for the entire series or $70 for individual workshops. Register online at illuminatedperfume.com. Contact Dora Goldsmith at doragold@zedat.fu-berlin.de to purchase a kit.