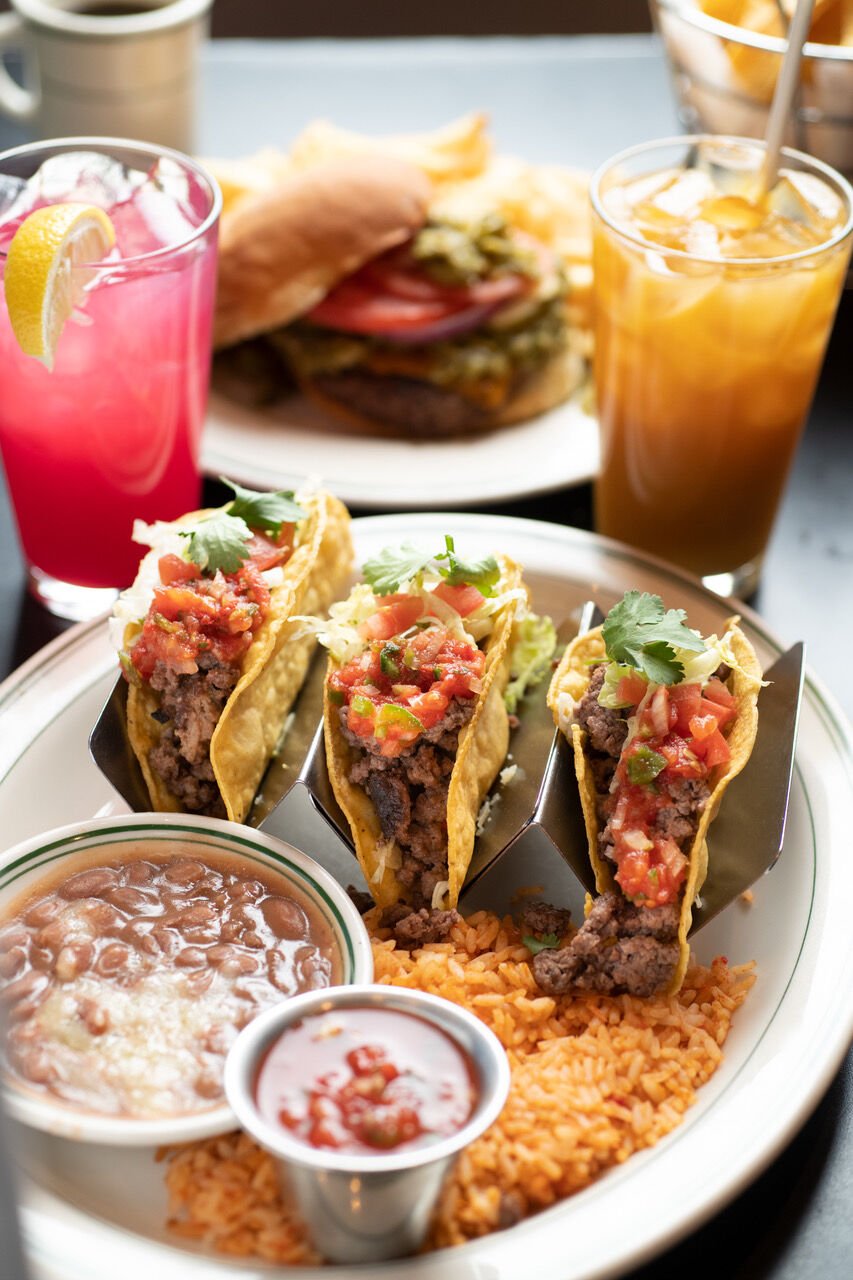 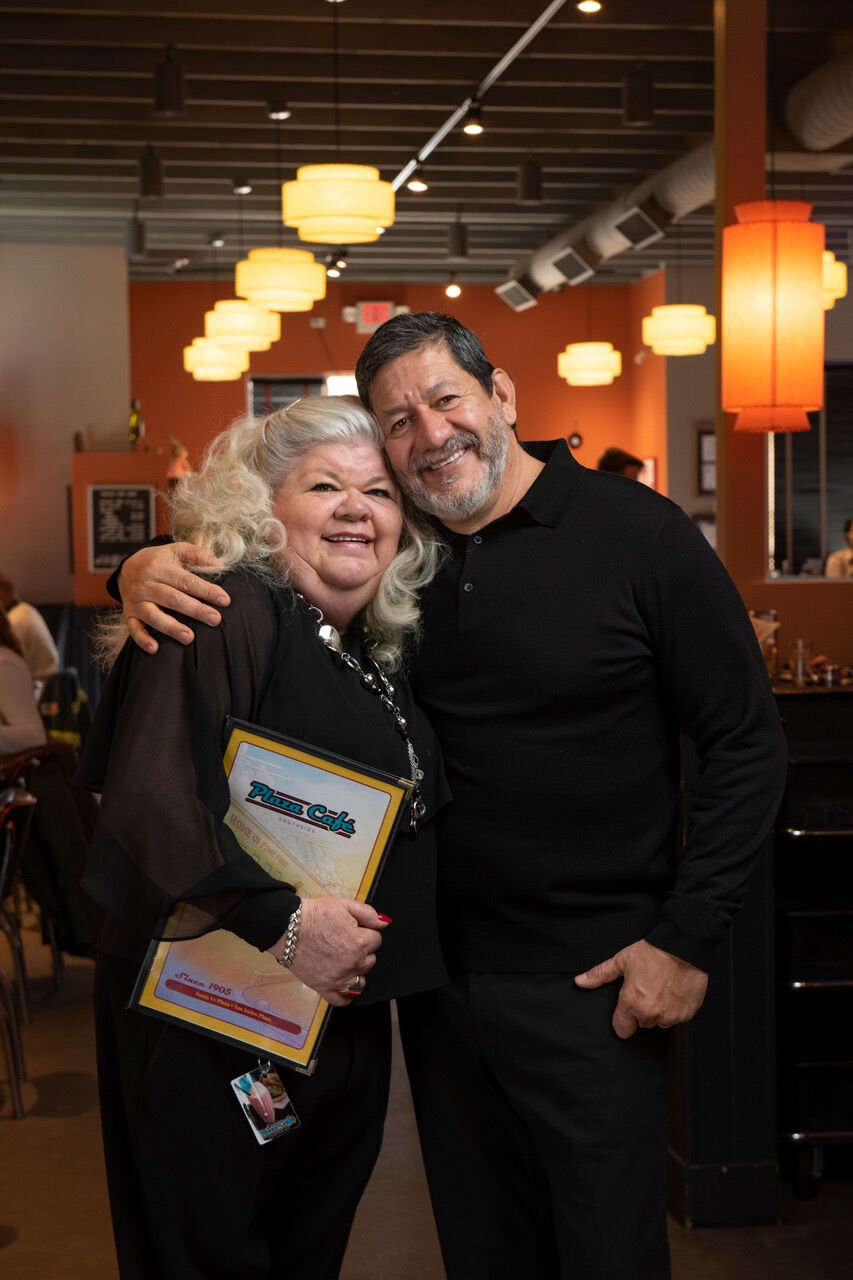 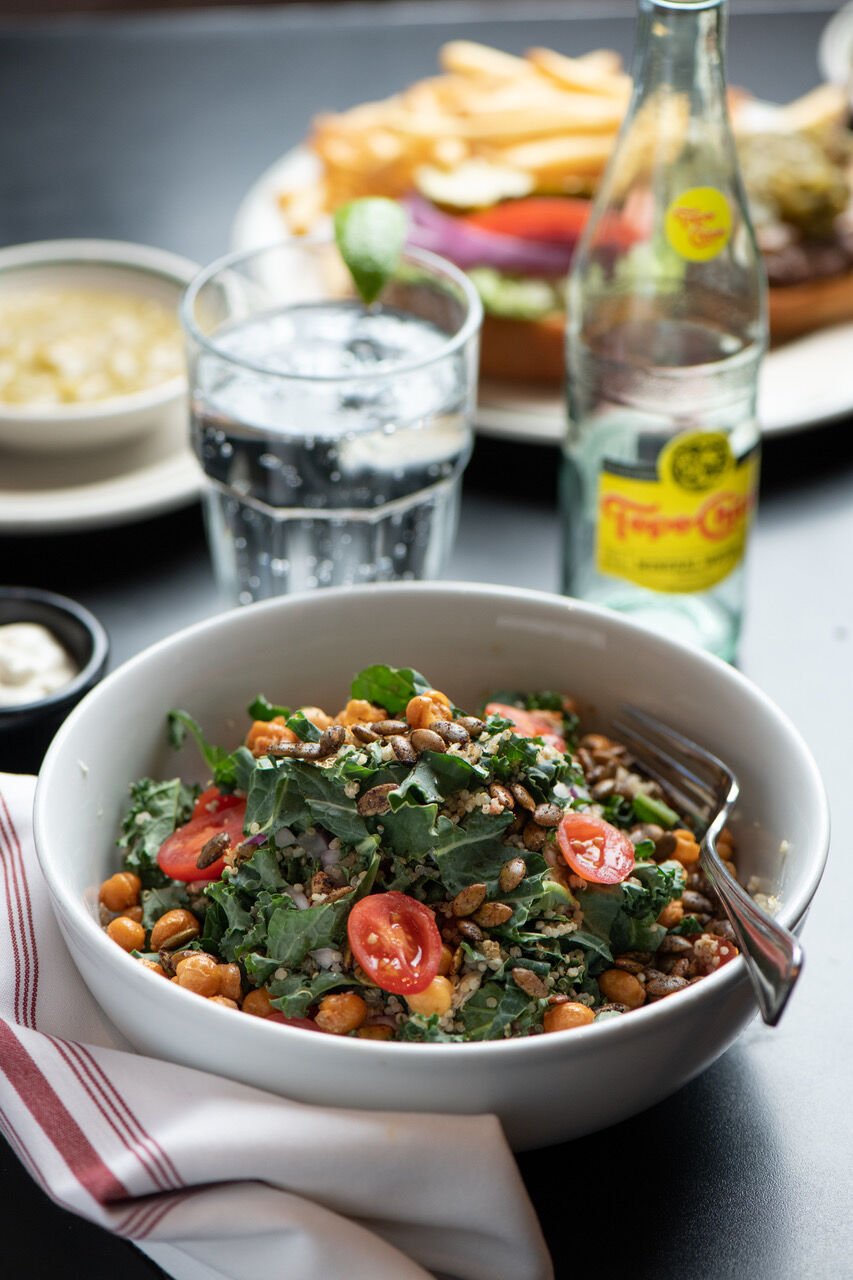 Before the pandemic, Plaza Café Southside was the place to be for brunch. The air was heady with fresh chile and strong coffee. Diners waiting for tables crowded around a brightly lit bakery case to ogle the key lime pie and red velvet flan. You often saw someone you knew, and the place could get loud as people called out to cousins and co-workers. Servers bustled about, delivering platters of pancakes and huevos rancheros. And, if you’d been coming to Southside for a while, and she’d gotten to know your face, you were likely to get a hug from the general manager, Belinda Marshall.

“I like to hug everybody. I can’t do that now. I’m going through withdrawal,” says Marshall, a bubbly lady in her mid-60s with a cascade of wavy white hair. She sits in a booth in the spacious but empty eatery (3466 Zafarano Drive, 505-424-0755, plazacafesouth.com) with Leonardo Razatos, 56, her younger brother and owner of Southside. He also owns the original Plaza Café, on Lincoln Avenue, which has been in their family since 1947. The sister restaurants are an indelible piece of Santa Fe history and its contemporary culture. Though the pandemic has hit them hard, they’re doing a brisk takeout business, and Razatos and Marshall are positive that they’ll survive this unusual era and come out stronger on the other side. In addition to their own livelihoods, there’s a legacy at stake.

“As far as we know, the Plaza Café has been around in some shape or form since about 1905,” says Razatos, with dark eyes, dark hair, and an easy laugh. “It had almost half a century in Santa Fe before we got involved.”

Their father, Dan Razatos, arrived in Santa Fe as a young man in the early 1940s. He was born in Greece, on the island of Kefalonia, and immigrated to Alexandria, Egypt, as a teen. A few years later, he joined the Merchant Marines. One day, when his boat docked in New York City, he hopped off and then stayed in the United States. How he got to New Mexico has always been a mystery, but Razatos said his father had some distant relatives here, and he joined the small but growing Greek community in the City Different. He left to fight in World War II and was naturalized as a U.S. citizen after his return. He later married a local woman, Beneranda, with whom he had six children. (Dan Razatos died in 1997.)

The only current menu item that had been available in the ’40s is chile by the bowl, which is especially popular during cold and flu season. It’s somewhat ironic that it was even on the menu then, because Razatos and Marshall say that when they were kids, people usually ate burritos, fajitas — and other dishes that are now considered Santa Fe staples — at home. They went out for American food. According to the vintage menu that hangs on a wall at Southside, dinner choices included lamb chops on toast ($1.35), top sirloin steak ($2), and fried calves liver with onions and bacon ($1). An influx of tourism in the 1970s led to the shift toward Mexican and New Mexican dishes, and now that’s what they serve the most of at both locations. Still, American fare, like meatloaf and cherry pie, sells much better to the tourist-centric clientele downtown than to the local customer base that frequents the Southside.

“We can’t give cherry pie away up here, but the hotter the chile, the better. If someone complains that it’s too hot — oh well, they’ll get over it,” Marshall says.

She came on board at Southside in 2014, when her brother Leonardo got married and moved to Milan, Italy, where his husband works in fashion. Razatos has always had wanderlust. He’s lived in California and New York and, despite the success of his restaurant, he still longed to see the world. He met the man who would become his husband on a trip to Mykonos, and Razatos now splits his time between Milan and Santa Fe, always feeling the call of the continent when he’s in New Mexico, and the lure of home when he’s away. (He’s currently in town for an extended period due to the pandemic.)

Marshall oversees operations downtown, where their little brother, Andy Razatos, 50, is the general manager. Like actual sisters, the restaurants have many similarities but will always be just a little different from one another, Razatos says.

“They have sopapillas downtown, which we don’t have. And their red chile is always better than ours.” A hint of sibling rivalry enters his voice, even though he’s owned both places since last year. “But we’re bringing the hotter green chile down there. We’ve been experimenting with that and, so far, no one’s complained.” (The original Plaza Café is closed for the winter. Depending on the governor’s orders, they will reopen in March.)

Razatos is always tweaking the chile. “I drive the cooks crazy because I’m never happy with how it is. I say, Make it more like this or Add a little bit of that,” he says. Red chile is the first thing he eats when he comes to town every few months, loaded onto plate after plate of huevos rancheros, the dish he misses the most in Milan. He also enlists his mother’s help in taste-testing, and they snag her recipes all the time.

“Like the Norteño tacos, which are like she used to make. Ground beef, chopped tomatoes, iceberg lettuce, salsa. They look like the tacos from an Old El Paso taco shell box, but they are so delicious, in a guilty pleasure kind of way.”

They’ve also adopted their mother’s calabacita casserole, which they’re currently offering as a family meal kit to go. Calabacitas, which is a mix of corn, zucchini, and green chile, is layered with ground beef, chile con queso, and onions. “She made it all the time when we were kids,” Marshall says. “People love it. And when we reopen, even if it’s not on the menu, you’ll still be able to get it, because we have all the ingredients.”

Tradition is a priority for Razatos these days at Plaza Café Southside, but that wasn’t always the case. When he first opened in 2003 (in the space at the Quality Inn, on Cerrillos Road, that’s now occupied by Lu Lu’s Chinese Cuisine), “It was a slightly different vision,” he says. “I sort of tried to make it, like, the more modern, cooler version of the Plaza Café.”

He took the menu through different phases over the years, first experimenting with Mexican, rather than New Mexican flavors, seeking different kinds of heat from a variety of chile peppers outside of the usual red and green. When they moved to their current location in San Isidro Plaza, in 2009, he brought an almost-fine-dining edge to some of the dinner dishes. He followed what was trendy, he says, but now he’s much more interested in what’s authentically New Mexican.

Razatos credits his sister with his new perspective.

“Belinda helped bring down my snobbery about making things fancier than they have to be. She has brought a lot of things here that have been huge successes, that I didn’t see coming. Like, she came up with an old-school New Mexico Lenten menu. Have you ever had tortas de huevos? It’s a savory, deep-fried meringue served with chile, and spinach sautéed with beans and onions [on the side]. If we’re open during Lent this year, we’re adding salmon patties to the menu.”

Razatos waxes on about the way food triggers memory, and how nostalgic he’s gotten about what he misses now that he’s older and spends so much time overseas. He really wants people to come to the Plaza Café Southside, and the original Plaza Café, to be transported to childhood meals at their grandmother’s house. But more than anything, he wants people to be able to return to eating in restaurants. Plaza Café Southside is abiding by all COVID-safe practices, of course, but socially distanced dining isn’t the way he and Marshall learned to practice hospitality.

“But no one has been laid off, just furloughed,” Marshall says. “We want everyone back as soon as possible. Cooks. Servers. Customers. We can’t wait to see everyone again.” ◀