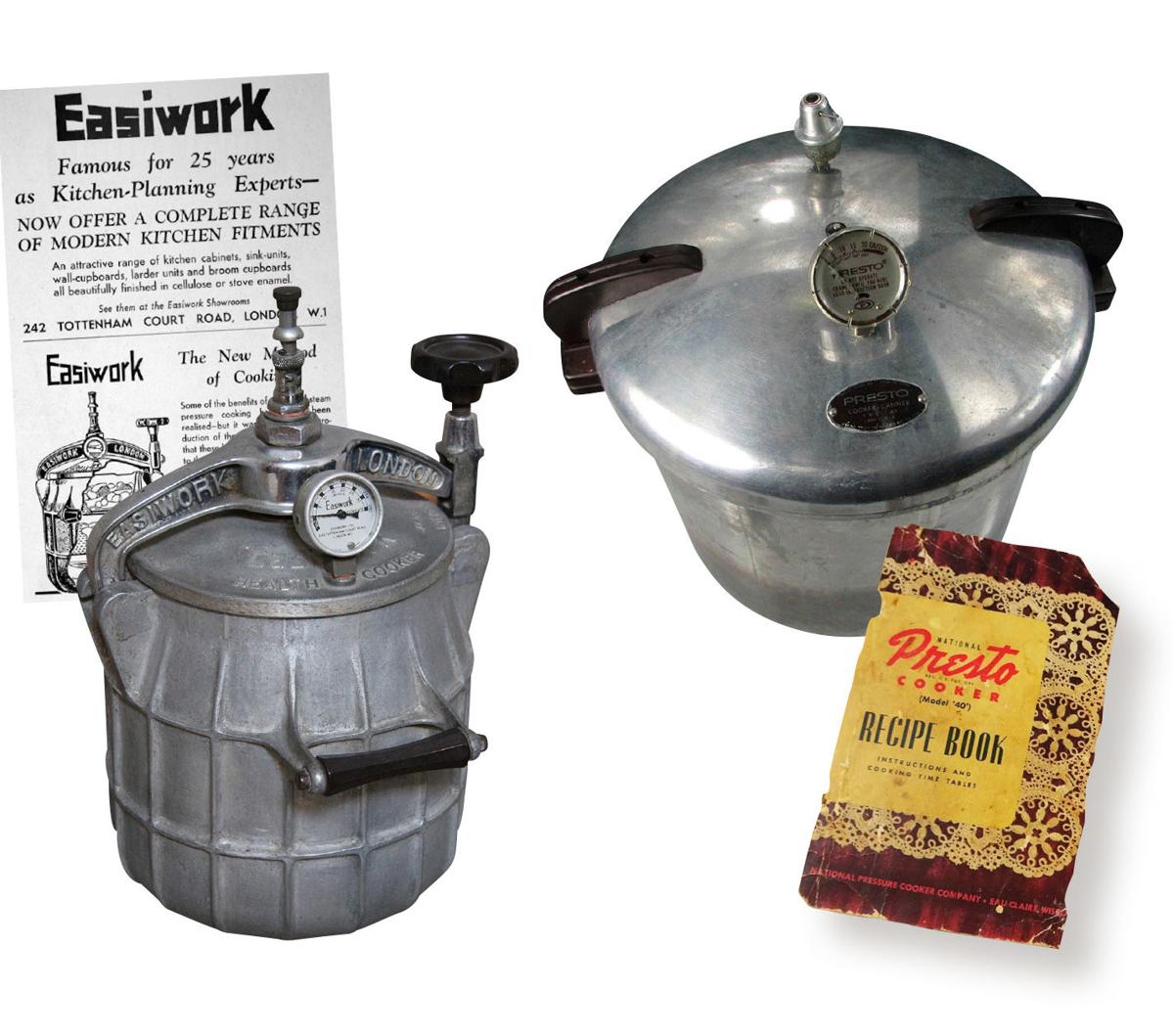 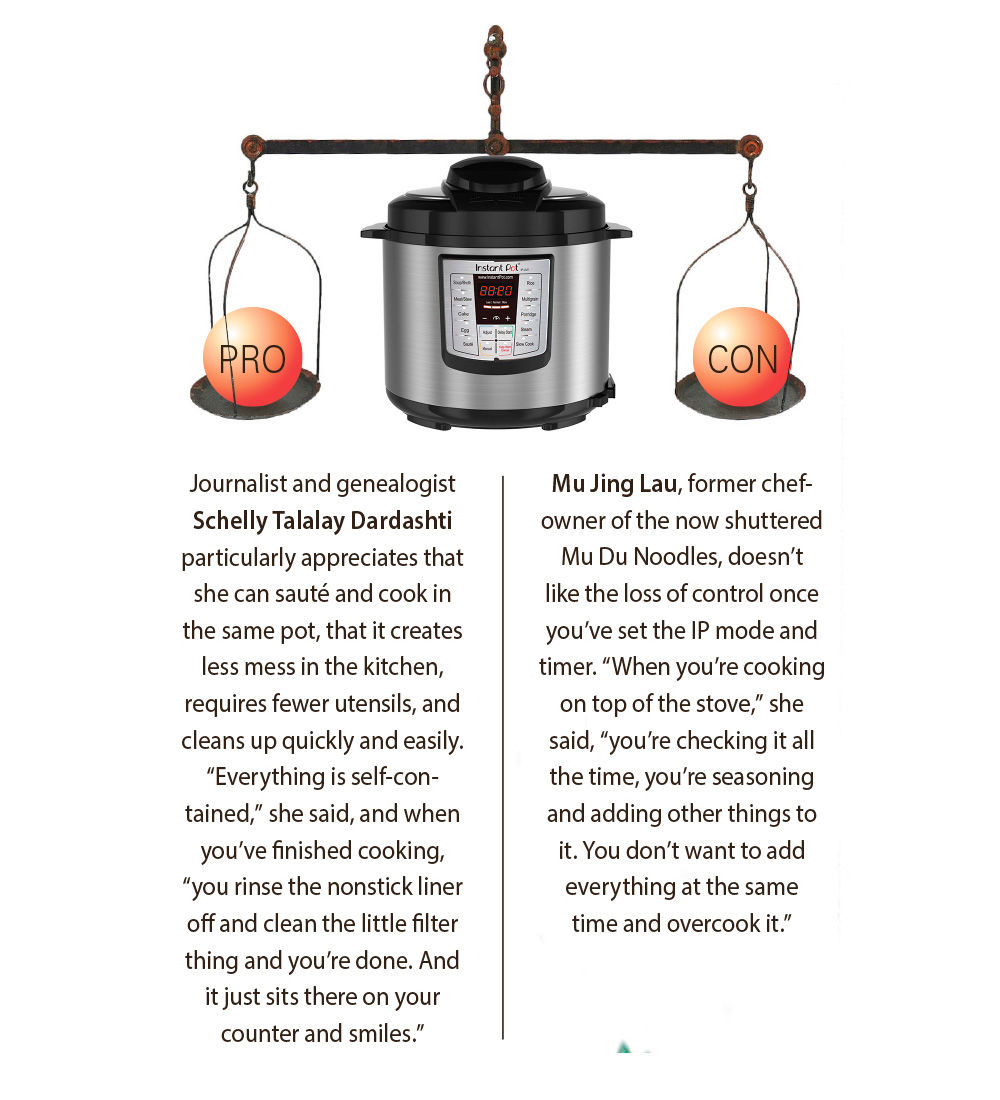 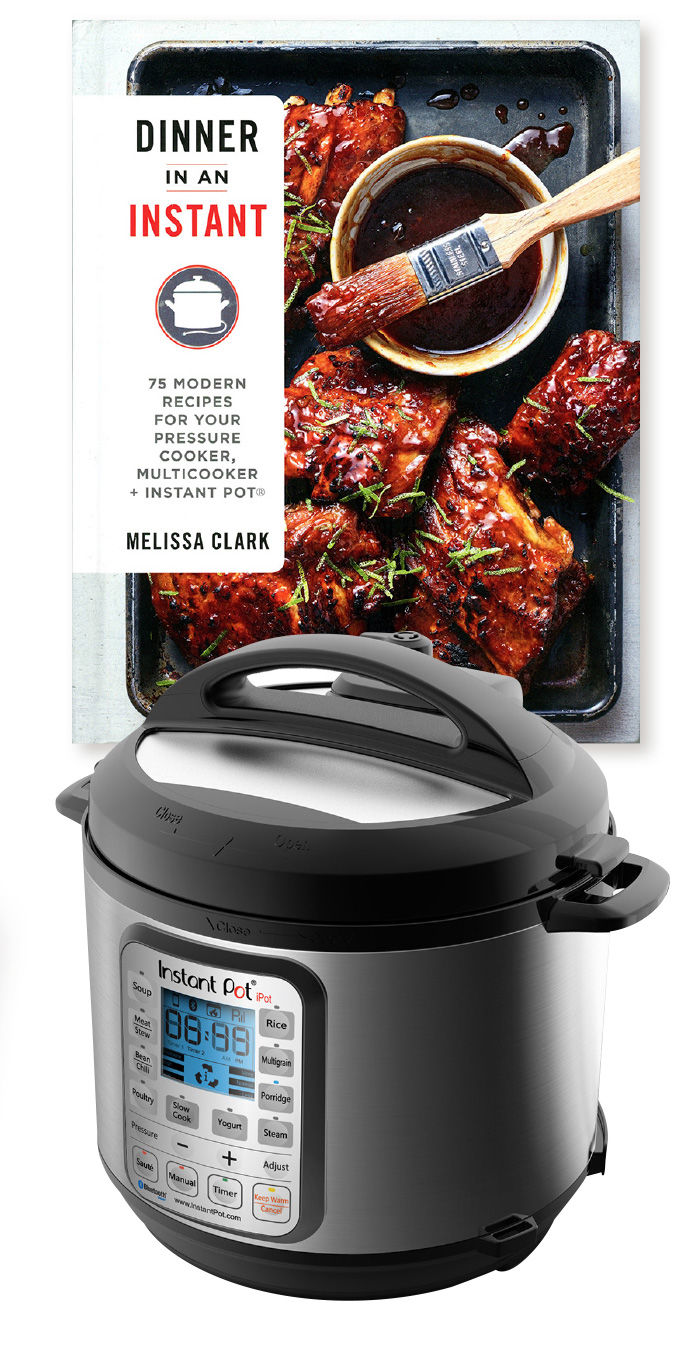 Ever wonder where a culinary trend got its start? Here’s a quick review of the old-school appliances that joined forces with cutting-edge technology to create the 21st-century kitchen phenomenon that seems to be everywhere in the food world these days — the Instant Pot.

In the beginning, there was the pressure cooker. Invented by a French physicist in 1679, the “steam digester” aimed to help food cook more quickly by raising the boiling point of water. After Presto unveiled a simpler saucepan version at the 1939 World’s Fair, pressure cookers became the most profitable housewares sold in the United States, a position they maintained until the late 1950s.

Next on the scene was the slow cooker. Patented in 1940 as the Naxon Beanery, the device sold millions throughout the 1970s after its inventor sold the rights to Rival Manufacturing, which rebranded it as the Crock Pot. Even though sales slowed in the ’80s, by 2011, 83 percent of American families reported owning a slow cooker according to Consumer Reports, which measures these things.

Fast forward to 2017, when the Instant Pot — a computerized electric multicooker that performs seven basic functions — pressure cooker, slow cooker, yogurt maker, warmer, steamer, and rice cooker that can also sauté — became Amazon’s best-selling Black Friday home and kitchen offering. Hitting the market first in 2010, the Instant Pot accelerated its journey from new device to cult status on Amazon Prime Day in 2016, when more than 215,000 were sold in 24 hours.

Invented by Robert Wang, an out-of-work Canadian computer scientist, the Instant Pot is a family-based business that went viral without a marketing department or a single outside investor. By merely listing the pot on Amazon, and sending test units to influential cooks, chefs, and food bloggers, Instant Pot triggered stories and recipes on the web and via social media. Sales began to climb, primarily by word-of-mouth. Today it’s impossible to visit an online food site or thumb through a magazine without encountering Instant Pot stories and recipes. The Nom Nom Paleo site was an early adopter — there’s nothing like a pressure cooker to process a large cut of meat quickly. Vegetarians, vegans, and clean food proponents like Whole30 are also fans of the device, which can cut the cooking time for grains and beans from hours to minutes.

Sites and publications as diverse as The Salt, The Kitchn (which indexes more than 50 Instant Pot stories and recipes), Cooking Light, Food52, Weight Watchers, Tasting Table, Bon Appétit, and The New York Times — as well as Instant Pot-dedicated bloggers like Amy & Jacky at www.pressurecookrecipes.com — feed the still-growing demand for more stories, more instruction, and more recipes specifically adapted to the multicooker. Even the venerable New Yorker recently profiled “The ‘Butter-Chicken Lady’ Who Made Indian Cooks Love The Instant Pot” — a story about Urvashi Pitre, a Dallas-based scientist, food blogger, and author of the newly released Indian Instant Pot Cookbook. Pitre realized that the device “was a natural match for Indian cooking, with settings for stewing meats, cooking lentils, beans, and rice, and even making yogurt,” in a fraction of the time, and without the need to stay close to the stove. (A New Yorker website update, in what must be a first for the magazine, tagged Pitre’s butter chicken recipe onto the end of the original story.)

Though other manufacturers have brought their own versions of the multicooker to the marketplace, the Instant Pot is still the star of the multicooker universe. There are more than 25,000 product reviews on Amazon; the official Instant Pot Community on Facebook boasts more than one million members internationally, many of whom praise the pot for its impact on their cooking — and their lives — with almost religious zeal.

The Northern New Mexico cooks with whom we spoke, while largely positive about their experiences with multicookers, were less fanatical about the Instant Pot itself. Schelly Talalay Dardashti, a journalist and genealogist, is wildly enthusiastic about her Aroma multicooker. “I love it!” she said. When she lived in Iran, Dardashti says, “We always used pressure cookers because the meat was like four thousand years old, and if you didn’t pressure-cook it, you couldn’t chew it. There was no Persian kitchen that didn’t have a pressure cooker.” But she said she always hated using those old-school pressure cookers because she feared they would blow up — not something she worries about with the Aroma — although she acknowledged she uses the pot more frequently as a slow cooker than as a pressure cooker.

Dardashti particularly appreciates that she can sauté and cook in the same pot, that it creates less mess in the kitchen, requires fewer utensils, and cleans up quickly and easily. “Everything is self-contained,” she said, and when you’ve finished cooking, “you rinse the nonstick liner off and clean the little filter thing and you’re done. And it just sits there on your counter and smiles.”

Pasatiempo food-writing colleague Laurel Gladden invested in an Instant Pot last month and has used it “a handful of times so far” for things as diverse as soft-cooked eggs, Cuban pulled pork, beans, and brown rice. “It’s pretty compact,” she said, “and it’s nice that you can complete many recipes in it from start to finish — beginning with the sauté function through to keeping food warm. In some ways it still seems a little gimmicky, but I’m really wowed by its ability to cook some things — beans and meat, for example, which usually take a very long time — really quickly. It really expands your meal options when your schedule is particularly busy.”

Gladden recommended new owners do some reading — she loves New York Times food columnist Melissa Clark’s Dinner in an Instant. “It feels like a book you could easily cook your way through,” she said, “à la Julie & Julia.” She urged cooks to embrace the idea of experimentation. “I’ve already become much more comfortable with it after using it for just a few projects.”

Santa Fe cookbook author Cheryl Alters Jamison isn’t sold on either the multicooker concept or the IP. She tried one out a few times when she was working on Texas Slow Cooker, her most recent book, and while she found it performed comparatively well, she said, “I didn’t see any reason to have one myself. I don’t particularly like the look of it,” she said, “or the clunkier lid — which is made to accommodate the pressure-cooking function.” Jamison prefers to stick with her stainless-steel slow-cookers, which can now do much more than simmer on high and low settings. “You can upgrade a slow cooker so cheaply now,” she said, that she’d opt for that over an IP.

Mu Jing Lau, former chef-owner of the now shuttered Mu Du Noodles, shares some of Jamison’s sentiments. She let the Instant Pot her son sent her sit in its box for almost two years, only removing it from its carton when she needed the box for something else. The pot then sat on the floor for another year, until a visitor, who loves the IP so much that she travels with one, convinced her to give it a try. “Once somebody shows you how to do it,” she said, “it’s a no-brainer, like logging onto the web.”

On the plus side, she said she can make broth in about half an hour, and the stainless-steel insert is easy to clean. On the down side, the now-retired chef doesn’t like the loss of control once you’ve set the IP mode and timer. “When you’re cooking on top of the stove,” she said, “you’re checking it all the time, you’re seasoning and adding other things to it. You don’t want to add everything at the same time and overcook it.”

Anne Ritchings, a home cook who has helped test recipes for a local cookbook author, has used both a pressure cooker and slow cooker for years, but quickly became a fan of the IP when she bought one during last summer’s Amazon promotion. “It cooks rice well, is perfect for cooking beans (without pre-soaking), and it makes beautiful stock and soup,” she said. And much like the home cooks who first embraced the pressure cooker, and then the slow cooker, she said what she appreciates most is the convenience of the Instant Pot. “The advantage to this machine as a pressure cooker is that I can set it and walk away. I don’t have to hang around and constantly be checking the pressure gauge.” She added, “It does take up a lot of space, but when you consider that it can replace at least two other appliances, you may end up with more room in your cabinets.”