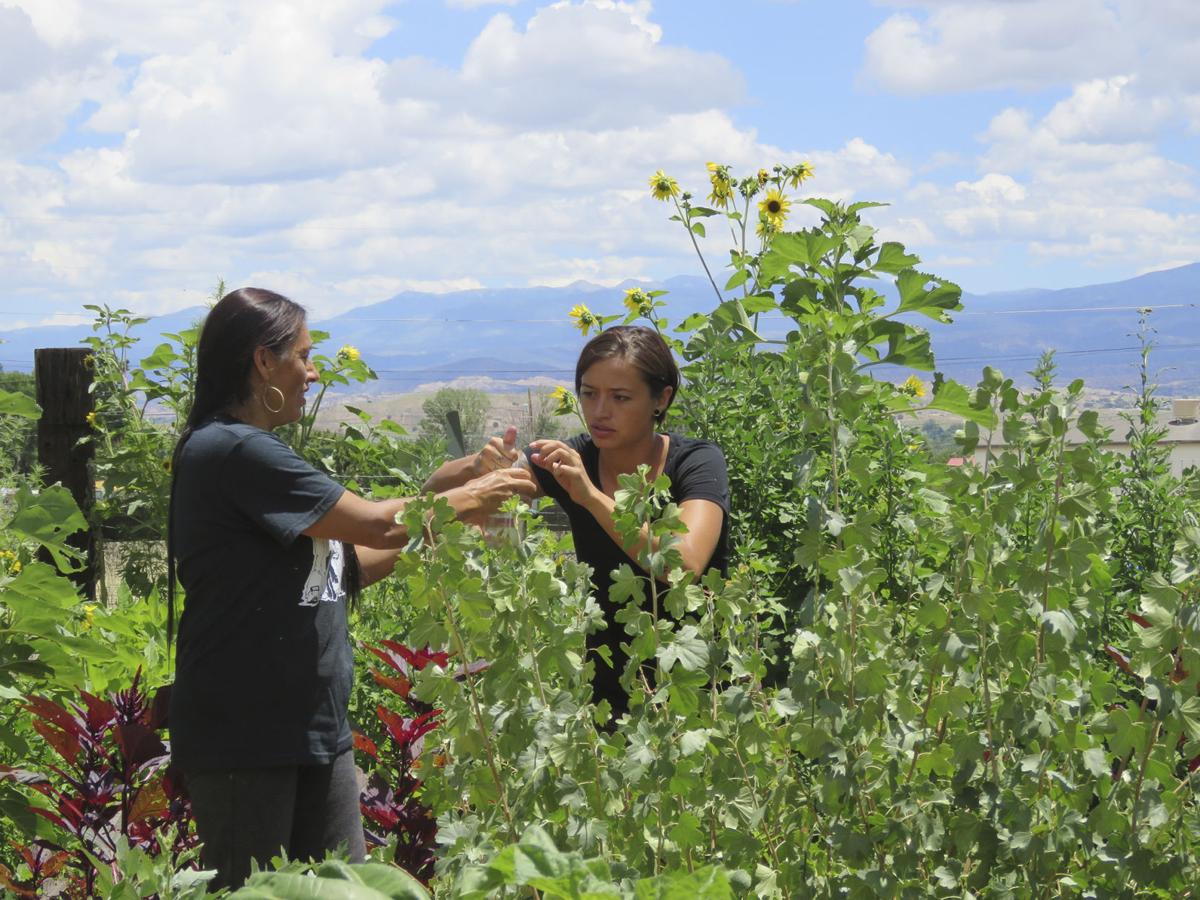 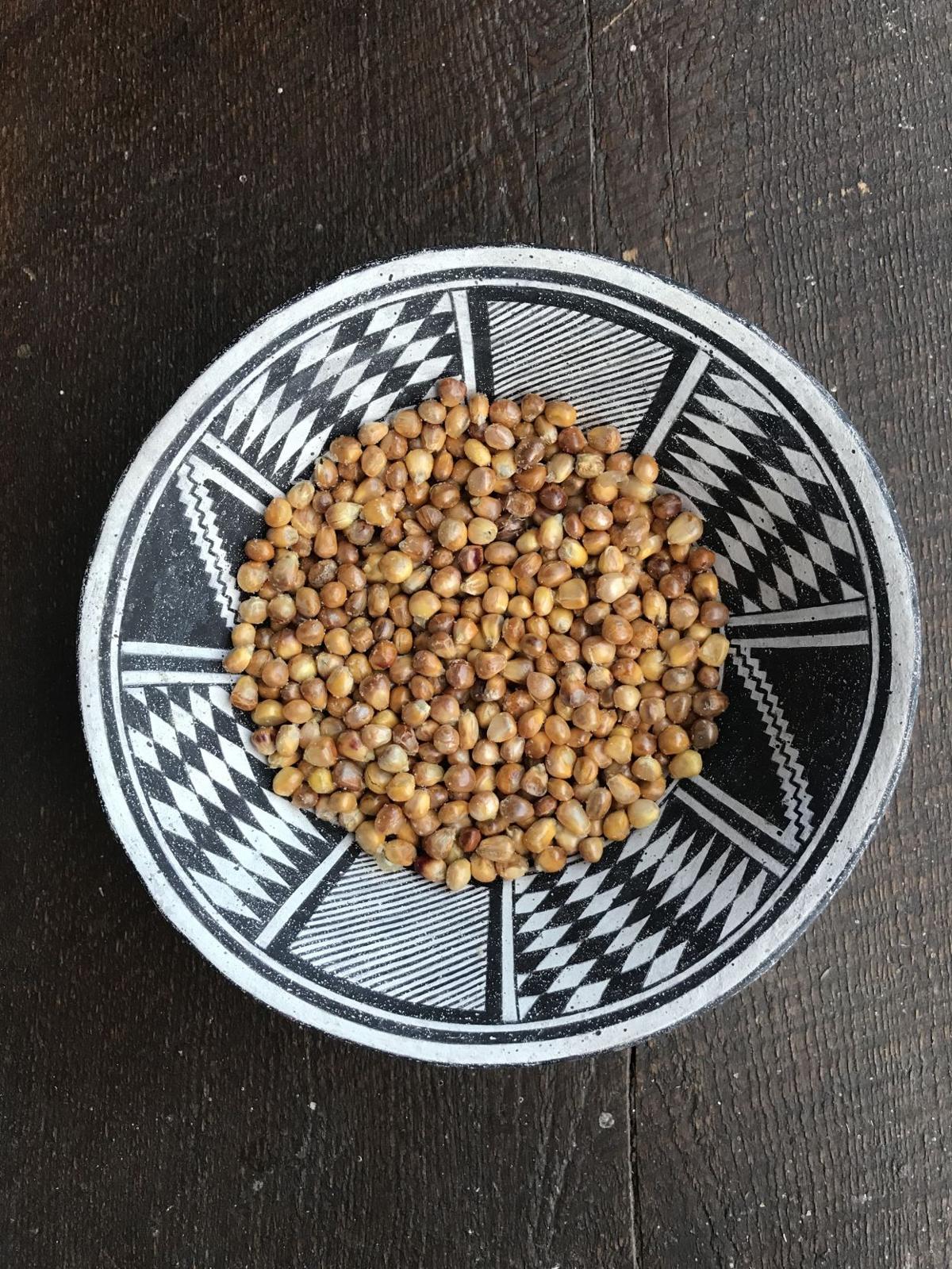 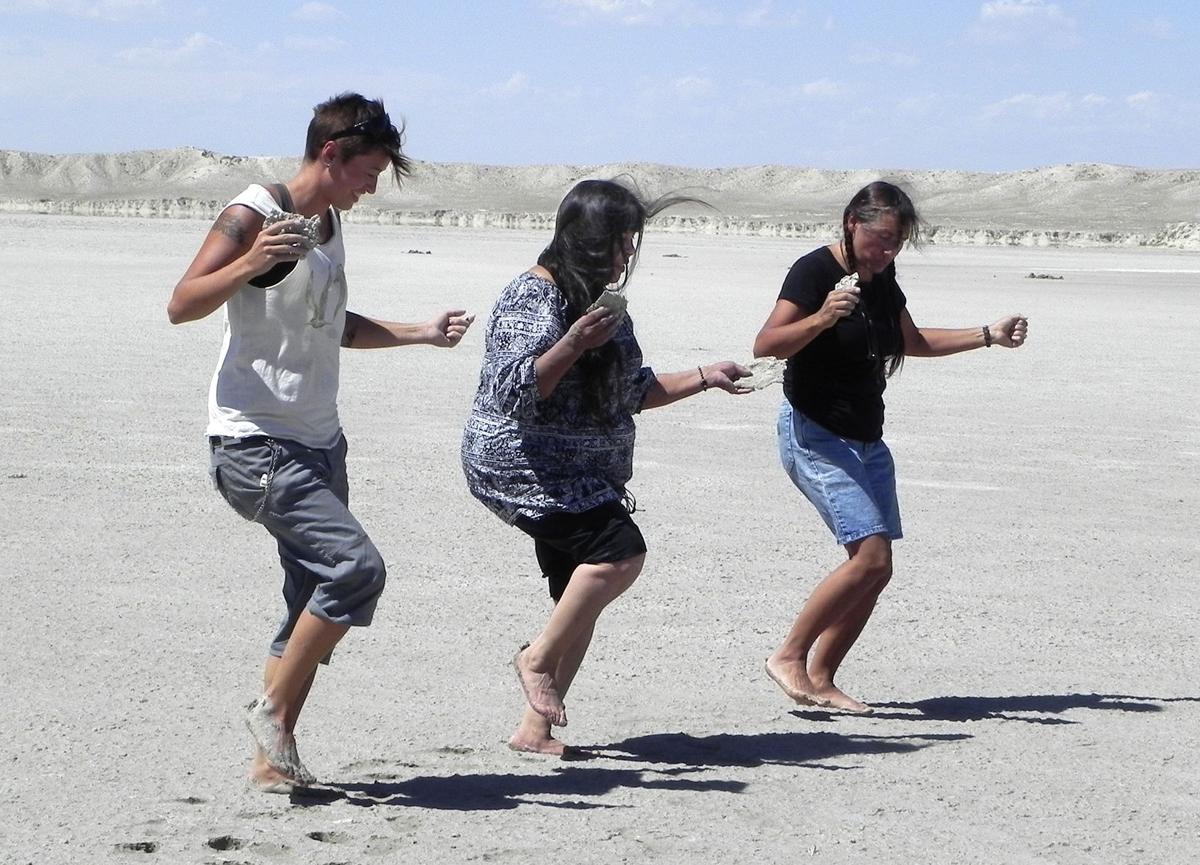 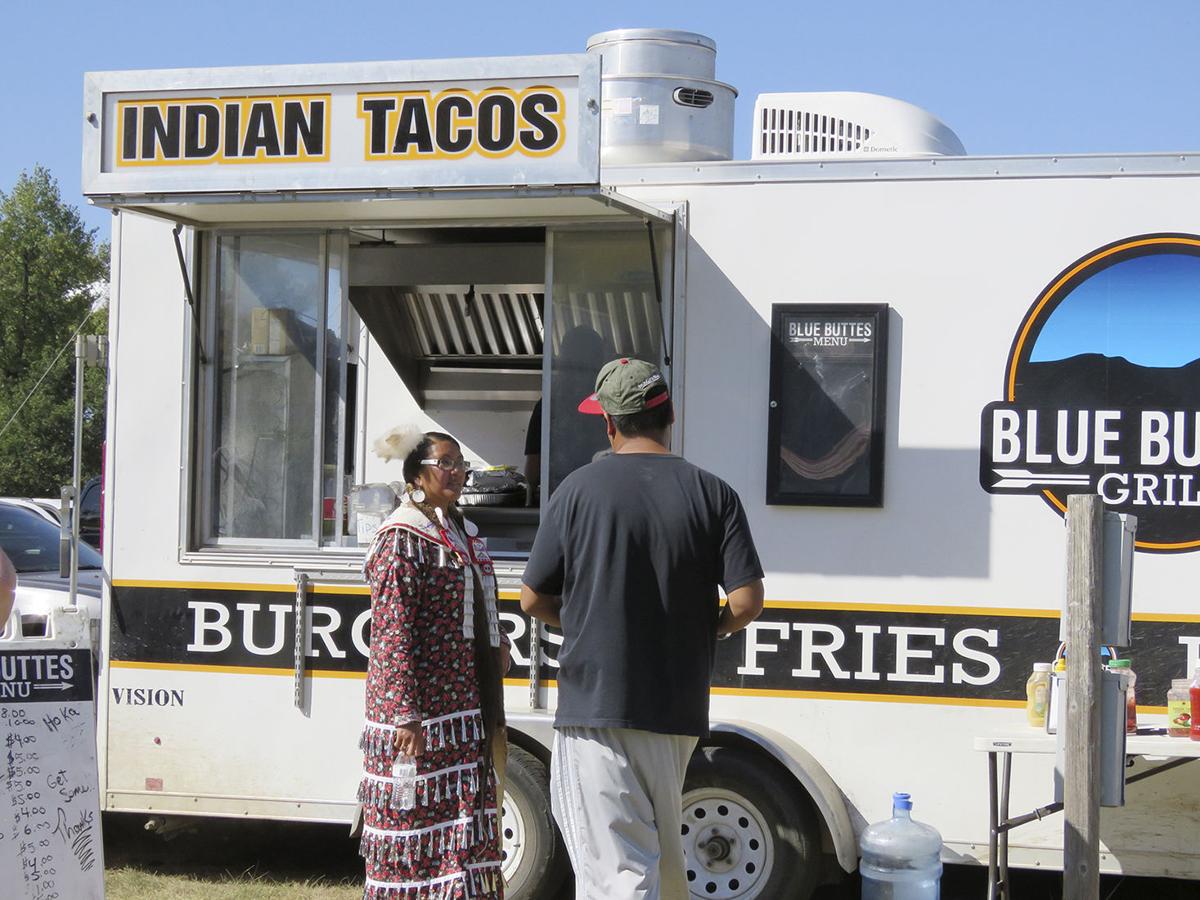 In her 2018 book Food Sovereignty the Navajo Way: Cooking with Tall Woman, Charlotte J. Frisbie, professor emerita of anthropology at South Illinois University, notes that improving diets is “a political as well as a public health measure.”

Academically dense but readable by anyone with a deep interest in Navajo foodways, the book reports firsthand experiences and information collected during the decade the professor lived with Tall Woman, who died in 1977 at 103 years of age. Frisbie documents the gathering, growing, and preparation of traditional foods on the Navajo Nation, augmenting her highly detailed narrative with studies, government reports, recipes, and the writing of other anthropologists.

Although the book focuses on only one tribe, Frisbie defines food sovereignty as an international movement by indigenous peoples to “return to traditional foods produced by traditional methods of subsistence … to reestablish healthy lifeways.”

The idea of a return to a diet based on traditional foods — the plants and animals that nurtured indigenous people before the arrival of Spanish, Anglo-American, or other colonists — is at the heart of Return: Reclaiming Native American Foodways for Health and Spirit, a 28-minute film by Santa Fe producer-director Karen Cantor (Singing Wolf Documentaries).

Return, Cantor’s third documentary — a film genre she calls “an intriguing challenge” — explores food sovereignty in a less fact-packed, more conversational way by focusing on six women involved in the movement. Although the foods they champion — salmon in Washington; whale in Alaska; corn, beans, and squash in New Mexico and South Dakota — are as different as the tribes and their geographical origins, their shared passion for the work they are doing ties the film together and demonstrates the national reach of the food sovereignty movement.

Although gaining control of and reversing the disproportionately high rates of diabetes, heart disease, and other chronic illnesses that afflict Native Americans is a major goal for all, the women’s focus isn’t just on improving the physical health of their families and tribal members. “It’s feeding your spirit, it’s feeding the people, it’s feeding who you are. It’s helping you to remember who you are and the land that you came from … that is the medicine we are after,” says Valerie Seagrest (Muckleshoot) in the film. “A Muckleshoot person without a plate of salmon doesn’t exist. Without our food we would be nobody.”

Santa Clara Pueblo sculptor and food sovereignty activist Roxanne Swentzell (who is credited as creative consultant to Return) makes frequent appearances in the film. Much of her commentary is based on her Pueblo Food Experience experiment, during which 13 volunteers ate only pre-contact foods for three months and achieved dramatically positive changes in weight, blood sugar, cholesterol, and other health measures. Swentzell documented both the diet and its impact in The Pueblo Experience Cookbook: Whole Foods of Our Ancestors, published in 2016. Many of the scenes in the film also reflect activities undertaken both during and after the experiment.

Perhaps the strongest visual episode in the film is a trip to the salt flats of the Estancia Basin, historically the main source of salt for the people of New Mexico. The camera captures Swentzell; her daughter, artist Rose Simpson; and Marion Naranjo, founder of Honor Our Pueblo Existence and one of the original Pueblo Food Experiment volunteers, dancing barefoot on the gleaming white bed of the ancient lake, crusts of salt held high in their hands. It’s the image that opens the film and the inspiration for the creation of an animated representation of the Three Sisters — corn, beans, and squash — that makes brief appearances throughout the film.

Cantor notes that the trio of foods was an important enough source of nourishment for tribes throughout the continental United States to justify giving the foods a human form and a role to play in the film — a view supported by Kibbe Conti (Oglala Sioux): “The three sisters, which are corn, beans, and squash, grow together and nourish us uniquely … When we eat those plants,” she says, “we are in balance.”

The film also touches on the emotional and spiritual benefits of a return to a pre-contact diet, and the relationship between food sovereignty and tribal sovereignty. In a 2016 interview with Pasatiempo, Swentzell said that “because the diet was based on a cultural identity … there was also a reconnecting that none of us realized would happen. … It was not a fad or a diet. This was a belonging. This was an empowerment event.”

Before the title comes up, Swentzell defines some of the problems facing Native Americans and the solutions Return explores: “Hey,” she says, “we could maybe help ourselves. We could maybe eat better and make ourselves healthier. I could hear some of them saying, ‘What for? What’s the point? It’s too sad to keep going. Nobody listens to us anyway.’ I want to turn to them and say, ‘Win yourselves back by claiming ourselves from this colonization … [They] haven’t crushed us completely yet. Show them that you are not gone yet. Make it be a food revolution.’ ”

The call to decolonize indigenous diets has been picked up in a more politically pointed way by the I-Collective, an independent group of about 18 indigenous chefs, artists, herbalists, and activists from the U.S., Mexico, and Canada, who have begun serving nine-course dinners created from indigenous ingredients and served with a side of hard-to-swallow discussions of genocide, cultural erasure, and the general hardships affecting Native tribes.

“Indigenous food sovereignty is critical,” the collective’s website reads, “because many health issues are tied to colonialism and the exploitation of resources and people. Food is the most intimate connection to ourselves, our ancestors, our communities, but most importantly, to our future generations. Our vision is to increase visibility; own our foods and culture; promote Indigenous ingredients and histories in our modern world.”

“People don’t like it when you call them a colonizer,” said Hillel Echo-Hawk (Pawnee/Athabaskan) in an article about the collective posted on Eater.com on July 9. But “when Echo-Hawk addressed the crowd near the end of the evening,” author Suzanne Cope writes, “she didn’t mince words as she told the story of her Pawnee ancestors being displaced from Nebraska to Oklahoma by the American government, their ancestral round lodges plowed down, their foodways and customs forbidden, and their numbers diminished, through violence and hardship.”

Return addresses some of the same issues in a less confrontational way. Andrea John (Seneca Nation) tells how the government took 10,000 acres of the tribe’s land and flooded it to build a dam for the steel industry. After “a lot of fights and battles, within days houses were being burned down,” she says. “Prior to this the resources were there. We didn’t really need to depend on the government so much.”

The women who inhabit the documentary speak softly, even when what they have to say is painful. The original score by Santa Fe composer John Rangel and performed by Shelley Morningstar (Northern Cheyenne/Dutch) and Fabian Fontenelle (Zuni/Omaha), contributes a pensive note to the film, subtly underscoring the sadness that lies beneath many of the stories the women share.

Shot on location in New Mexico, South Dakota, Alaska, Washington, New York, and Wisconsin, Return was financed by a major grant from the Robert Wood Johnson Foundation President’s Grant Fund of the Princeton Area Community Foundation, which supports health initiatives and work in Indian Country, supplemented (as are many independent releases) by donations from the producer and some of her friends.

Her purpose in making the film, Cantor says, was to communicate some of the positive things happening in the Native American community. She hopes the takeaway for viewers will be the awareness that “they can make a difference in their own lives and in their wider communities — and that part of the difference comes from something as basic as food.” ◀

Food Sovereignty the Navajo Way: Cooking with Tall Woman by Charlotte J. Frisbie is published by the University of New Mexico Press.

Learn more about the I-Collective at icollectiveinc.org.