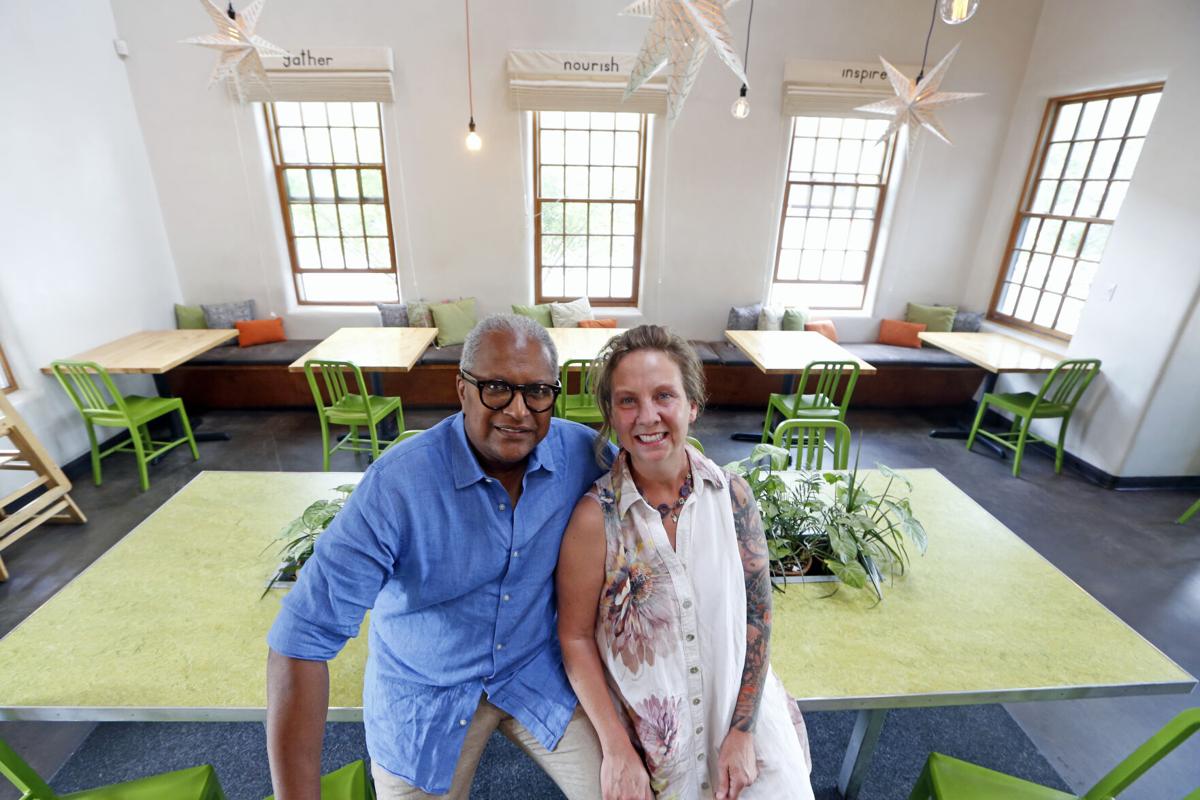 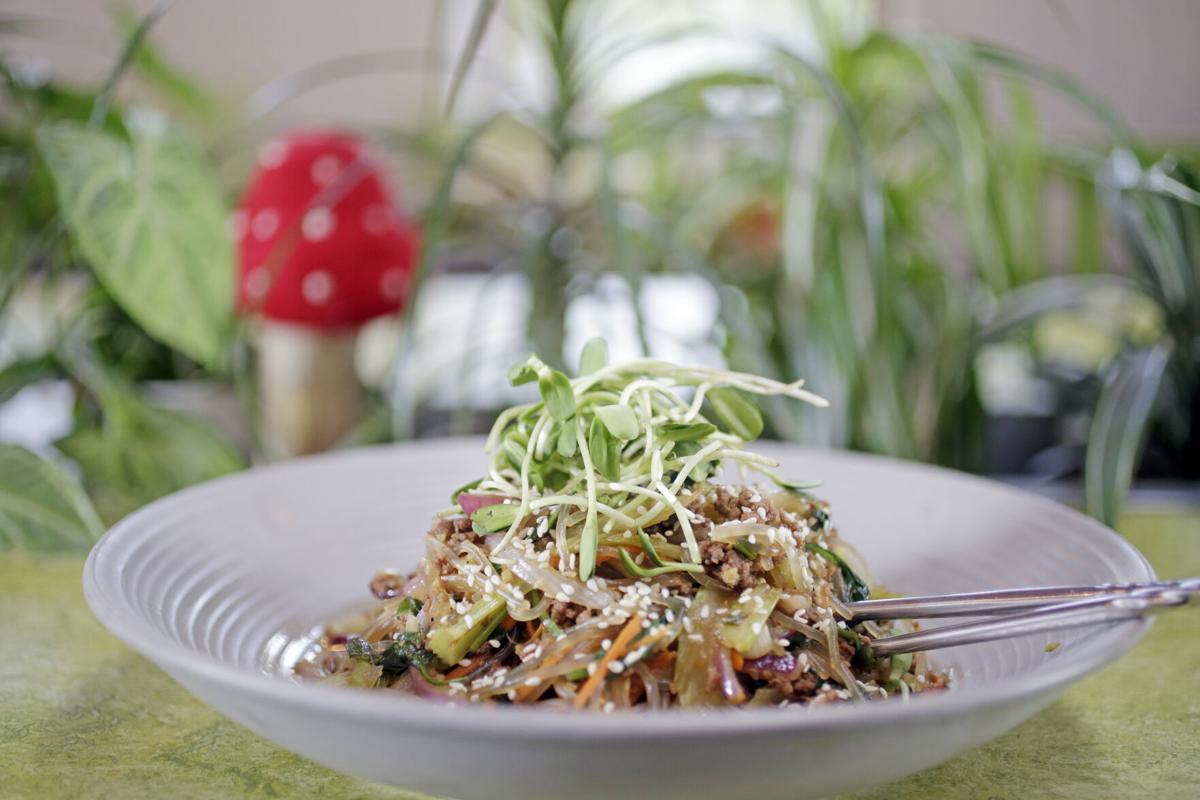 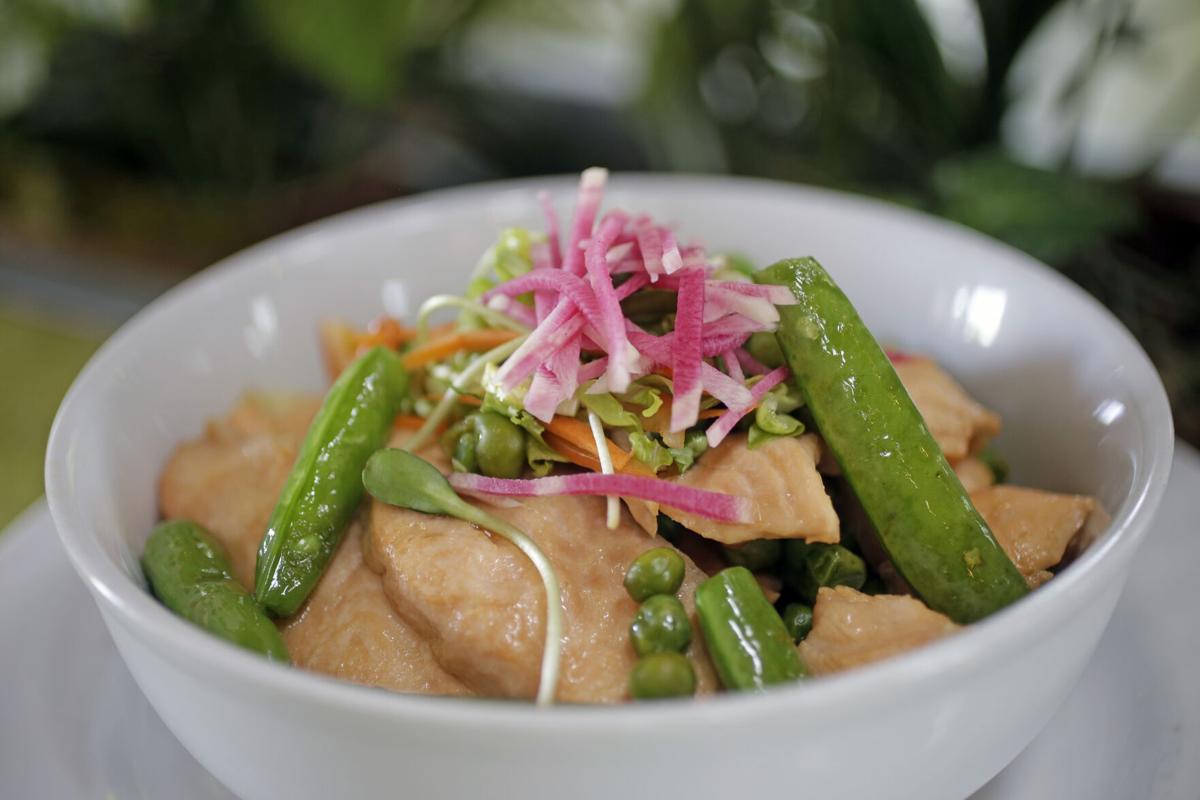 There are many ways to pay it forward. Volunteer. Donate. Be kind to strangers. The owners of Sweetwater Harvest Kitchen, Soma Franks and Les Samuel, take a different track. They want you to feel good after you eat at Sweetwater so that you can do good things. But what does it mean to make food that inspires people?

“My driving mission was to offer a food sanctuary where people could feel good about what they’re eating,” says Franks, 52, who opened Sweetwater in 2012. “We source consciously and carefully. We are really attentive to people’s needs around food. We’ve become a completely gluten-free restaurant, with the shutdown.”

Franks has wavy, dark blonde hair that she swirls into an up-do when she’s working, and a wardrobe of loose cotton dresses. For Franks, to feel “good” about the food you eat means knowing how it was made and where the ingredients come from, as well as how it affects you physically. Sweetwater offers health-conscious fine dining or, she says, “it’s where healthy is yummy.”

Vegans, vegetarians, and the gluten-averse can eat easily, without sacrificing taste, while their dairy-, meat-, and flour-digesting friends won’t feel deprived. Breakfast options include smoothie bowls, pancakes, and egg dishes. For lunch and dinner, travel the globe with dishes from India, Korea, Japan, and Mexico. But, if you order the chile relleno, it won’t be deep-fried, because Sweetwater doesn’t have a fryer, and it comes stuffed with quinoa, zucchini, and vegan cheese.

“People love it. People freak out about it,” says Samuel, 70, who came on board in late 2019, when Franks’ original co-owner, Fiona Wong, sold her half of the business. The former fashion industry executive had been acting as Sweetwater’s business coach since 2015 and helped her professionalize the restaurant’s systems and hiring processes. Before moving to Santa Fe in 2000 to “start a new chapter of his life,” he worked in New York, Los Angeles, and London. He carries an air of urbane sophistication.

“I don’t do hobbies,” he says. “A lot of people do hobbies. I get them to do business — so they can survive. So they know why X, Y, or Z is happening, rather than thinking [success] was just luck and that they can create luck again.”

Sweetwater serves breakfast, lunch, and dinner, and offers a selection of organic, biodynamic wines and sake, as well as beer. It’s located just west of St. Francis Drive, near the train tracks on Pacheco Street, in an office park that houses several art and design studios. Franks remodeled an art gallery into Sweetwater, which has the look and feel of a fancy party held in a barn. There are big windows and a high, pitched ceiling from which bare Edison bulbs and star-shaped pendant lights are suspended on colored cables. The tables are light wood and stainless steel; the mostly neutral color scheme is punctuated by lime-green chairs, and a row of bright red and orange jars of pickling liquid on a shelf across from the front door.

Franks grew up in Kansas City, Missouri, and worked as a server at Geronimo and Café Pasqual’s in Santa Fe before opening Sweetwater. She’s always had a strong vision and mission for the food, and she worked with the kitchen staff to turn her ideas as a home cook into restaurant-quality dishes. But business operations were somewhat unfocused until she met Samuel. Franks wanted to support the community, not just sell food, so she offered classes on topics like pickling and hosted pop-ups by others chefs. Thai Night, in particular, became so popular that for a while it constituted Sweetwater’s entire dinner service. Samuel disapproved.

“If it’s good, that’s fine, but if it’s bad, no one knows it’s not Sweetwater. Your name is attached to it,” he says. “I said, if you’re going to do dinner, you’re going to own it. It’s going to be yours.”

“It didn’t make sense as a business. But it was an offering. There was a desire for that,” Franks says.

Samuel’s business expertise was crucial during the shutdown, a perilous pause that nevertheless gave them a chance to further refine their systems and make things safe for reopening. Samuel’s outlook paired well with Soma’s community focus. She knew she wanted to stay open for curbside, in order to support as many of her employees as she could — and to make sure that Santa Fe didn’t forget about Sweetwater. First, they took the hard step of laying everyone off. Then, they refined the menu for leaner times and cut down their hours to serve only dinner, five nights a week. Finally, they rehired as many kitchen staff as they could.

“She did the phone. I did the running,” Samuel says.

Now that they are open for outdoor and indoor dining, Franks works days and Samuel works nights. He does almost all of the ordering and shopping, while Franks works with the front of the house. Customers might notice that things seem more orderly. For instance, there is table service for all meals now, instead of having table service at dinner and counter service for breakfast and lunch — a scenario Samuel calls “crazy making” for customers and staff. “People would come in and grab a table before they got in line, and then people got straight in line couldn’t get a table.”

“It wasn’t working very well,” Franks says. “And [coming out of] COVID, we wanted to control the crowd.”

In the early days of Sweetwater, the menu changed as often as the seasons. But, over the years, the clientele has grown attached to certain dishes, and they complain if they disappear. The pause gave them the opportunity to add a few new items. Popular dinner favorites like shrimp and grits and kimchi fried rice are joined by yucca root flatbread pizzas in three varieties: carrot hummus with walnut arugula pesto and pickled red onion, cashew basil pesto with tomato and goat cheese, and three-cheese made with jack, cheddar, and parmesan. All the pizzas can be made vegan.

Many diners come to Sweetwater seeking what they serve, including tourists. In fact, if you google “healthy food in Santa Fe,” it’s the first restaurant that comes up. Some people, however, are new to this type of food and are surprised at its rich and layered flavors. For neophytes, perhaps their biggest shock comes at dessert. Maybe you’d enjoy a huge slice of carrot cake or some banana cream pie. Would chocolate mousse hit the spot? It’s made with avocado instead of cream.

To anyone who balks at the vegan substitution, Franks says, “Taste it. They don’t believe it’s avocado. It’s guilt-free chocolate.”

Whether or not eating chocolate makes you feel guilty, many people are sensitive to dairy or to the gluten in traditional cakes and pie crusts. At Sweetwater, it’s possible for them to eat dessert without getting a stomachache. And that’s all Franks really wants.

Says Samuel, “We get a lot of people who come back the next day to tell us how good they felt. ... They could tell the difference.” ◀

I read through this article twice and couldn't figure out the wardrobe choices and hairstyle of co-owner Les Samuel.

Consistently yummy, healthy, delicious, nourishing food! Thank you, Soma and Les, for your vision and hard work in offering this gem to Santa Fe!

Definitely on of our best restaurants in this city filled with terrific restaurants.

[thumbup]. Had dinner there recently and loved it. I’ve always liked Sweetwater, but I like it even better now. The new menu has me looking forward to going back soon.