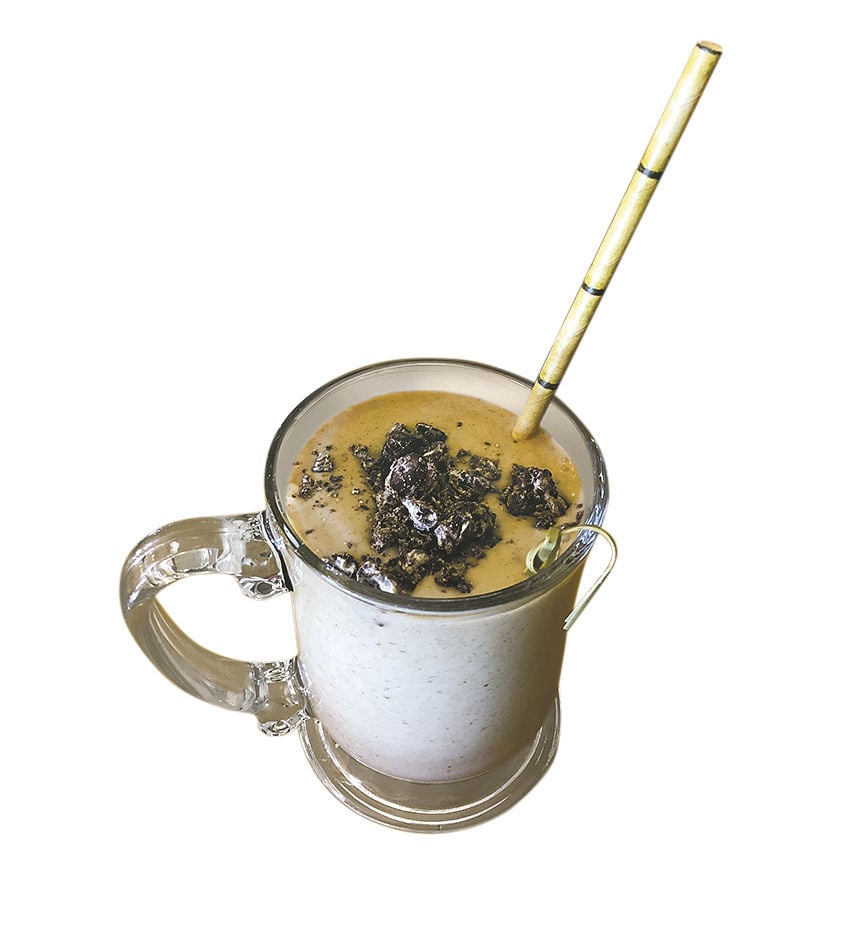 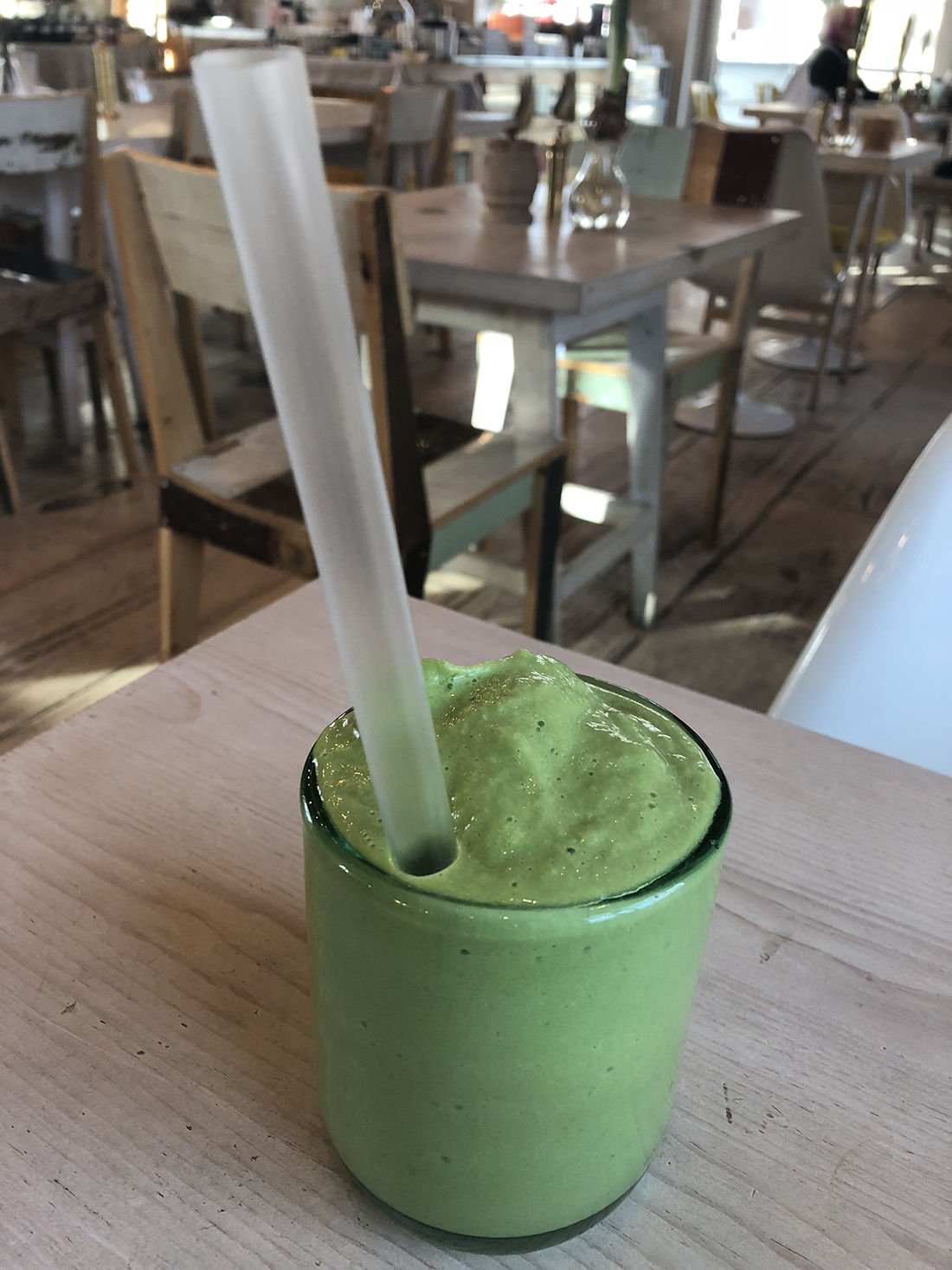 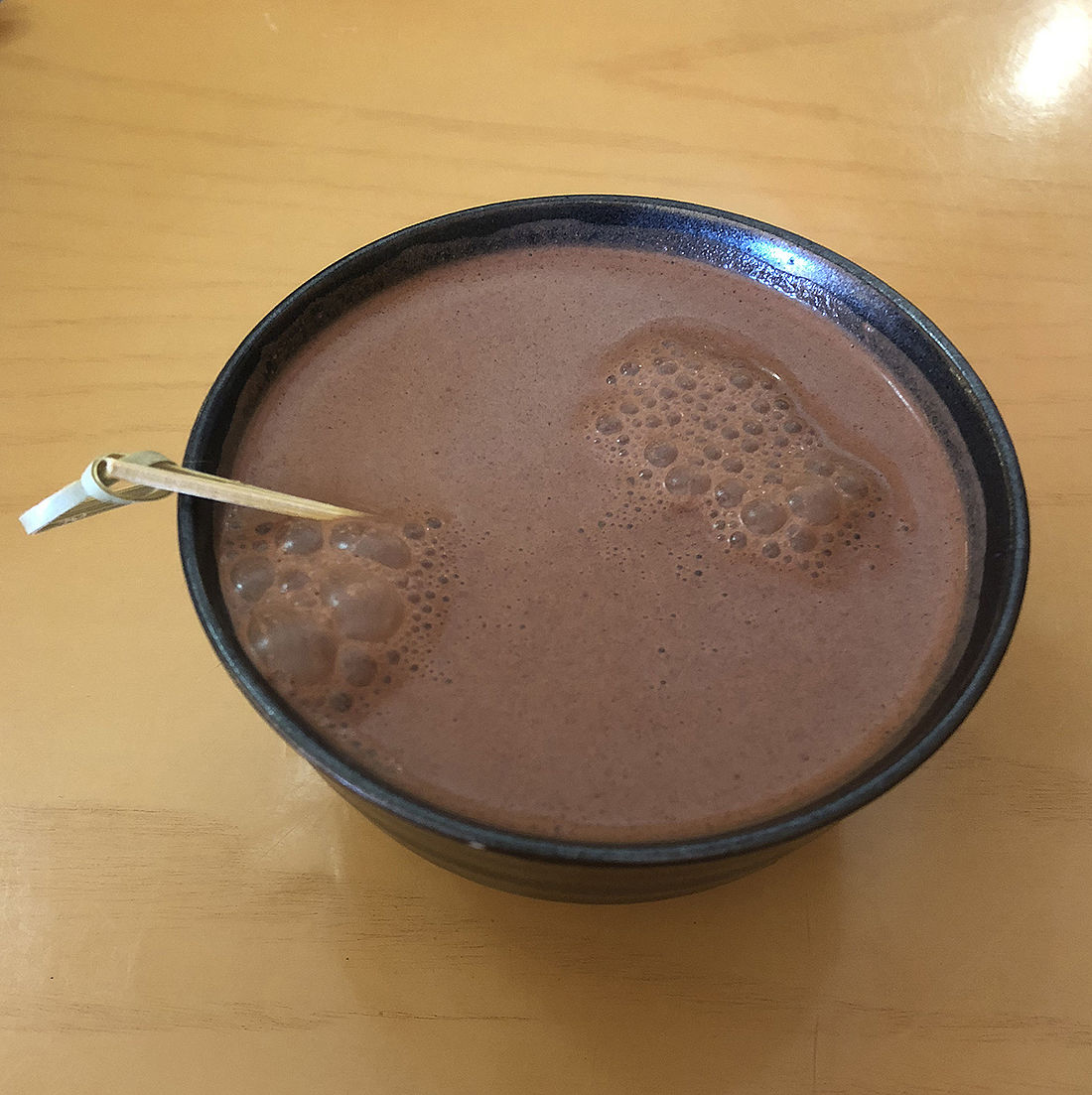 Each January, our stomachs fairly beg us for a soothing change of pace from heavy holiday food and drink. This gastronomic respite can be delivered to your insides in the form of smoothies and other health drinks — concoctions of alternative milks, fruits, nut butters, and somewhat more exotic ingredients, from raw cacao to mushrooms. In seeking out Santa Fe’s most satisfying offerings in this arena, I looked for vegan drinks that could substitute for a light meal, gravitating to those that contain more fat and protein than sugary fruit. Across the city, I found skilled smoothie-makers who were enthusiastic about discussing ingredients and willing to make substitutions.

Modern General (637 Cerrillos Road, 505-930-5462) is the standard-bearer of my ideal lunch replacement. Their Cold Brew Cacao smoothie ($7.25/12 oz., $8.50/16 oz.) contains coffee, banana, peanut butter, mint, milk (I substituted almond milk), honey, and toasted cacao nibs sprinkled on top. Modern General is also the home of a fruit-based smoothie that didn’t make me feel as though I was swimming in sugar. The Basil Coconut smoothie is a tart, refreshing blend of basil, spinach, coconut, pineapple, and lime. You can really taste all the individual flavors, and because it has spinach in it, you could conceivably convince yourself that it counts as a salad. Though its stock of random gourmet foods and old-fashioned-looking gardening tools is somewhat mystifying, the environment of Modern General is an appealing place to sit and read in the late afternoon as you sip a smoothie and listen to low-key indie rock.

The Maca Mocha Mojo smoothie ($9) at Edible Alchemy (815-B Early St., 505-983-8152) is an excellent liquid lunch with a chocolatey caffeine kick. Its foundation is banana, peanut butter, and cold-brew coffee blended with almond milk, Medjool dates, cacao, maca (Peruvian ginseng), mucuna (a tropical legume), and cacao nibs. For an extra buck, I added a scoop of protein powder and was able to power through a busy afternoon without feeling my stomach growl. This smoothie is a somewhat sweeter take on Modern General’s similar Cold Brew Cacao, but with more wellness bells and whistles.

Edible Alchemy’s Cloud 9 ($7) specialty latte looks and tastes sort of like a liquid health-food marshmallow. It’s a warm cup of almond milk, dates, sea salt, vanilla bean, and something called Blue Majik, a powder derived from the blue-green algae superfood, spirulina. Cloud 9 also contains 10 milligrams of cannabidiol (CBD), so you can expect to feel pretty relaxed by the time you see the bottom of your mug — a sensation that’s enhanced by the New Age restaurant’s unhurried service and emphasis on healing foods. I was hungry for a huge meal in no time after drinking the Cloud 9, but if you spent your holidays overdosing on stressful family interactions, this is the drink you’re looking for.

Apothecary Restaurant at Santa Fe Oxygen and Healing Bar (133 W. San Francisco St., 505-986-5037) is where I found the most decadent yet filling version of my preferred midday smoothie. The Butterfinger smoothie ($9.50) is as rich and delicious as it sounds, a dairy-free milkshake version of the candy bar for which it’s named. The velvety blend of almond butter, dates, maca, banana, and coconut milk is garnished with a substantial helping of chocolate-almond shavings. It’s too thick to drink through a straw, so I sat at a spacious table in the almost aggressively chill downtown storefront and gulped it in huge mouthfuls.

A friend ordered the Karavan Kava ($9), which looks as though it will be a warm drink but was a cool froth of pomegranate juice, coconut cream, cinnamon, cacao, and mint as well as kava root, which is known for its anti-anxiety effects. The waiter said the kava would make her mouth numb, but it did not, nor did she experience an out-of-the-ordinary sense of calm. But she did enjoy the drink and felt lightly and pleasantly satiated by the unusual flavor combination.

Apothecary’s version of golden milk ($6) was smooth with just a touch of sweetness. You can get it with or without ghee (clarified butter), which affects the richness as well as how filling the drink is. It is a smooth mixture that feels and tastes nourishing — perfect to sip on in chilly winter weather. Finally, I tried Mushroom Power ($10), a dark hot chocolate thick with a blend of mushrooms, including chaga, turkey tail, and reishi, that are purported to have amazing anti-inflammatory health benefits. I wasn’t sure I would respond to the flavor combination of chocolate and mushroom, but the fusion turned out to be ideal. Mushroom Power had body; it was like drinking chocolate with something very alive in it. I was famished when I downed it in the late afternoon, rushing around between appointments, and didn’t have time to eat again until about eight o’clock that night. At dinner, I toasted — over a complete meal — to the stick-to-your ribs effects of chocolate and mushrooms, settling on Mushroom Power for the title of tastiest, most filling health drink in town. ◀