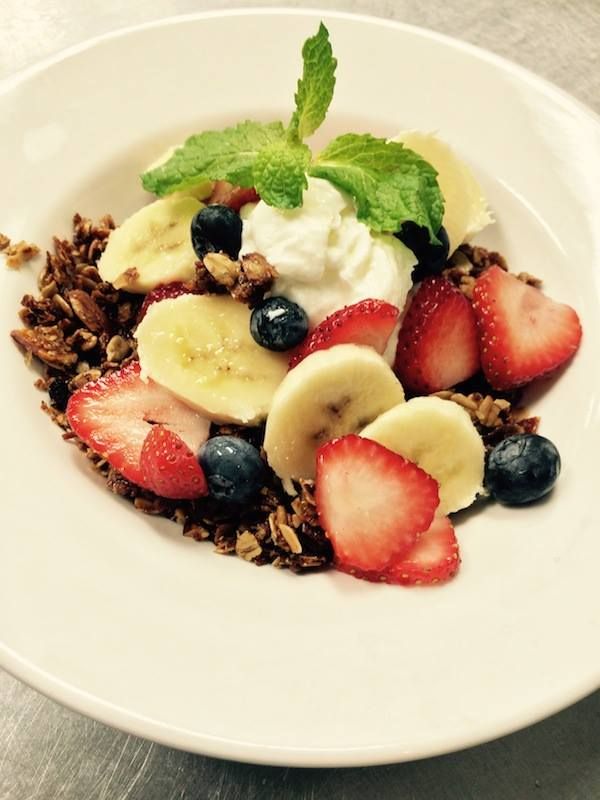 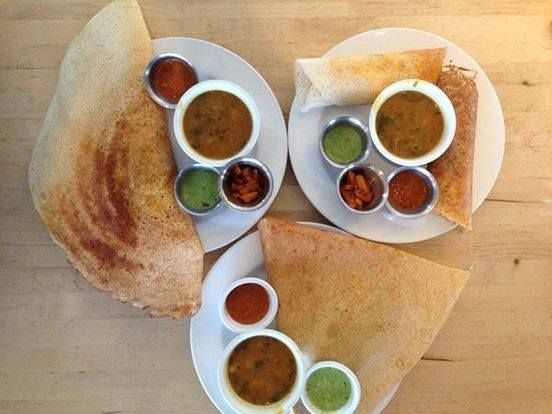 Café Fina is housed in a renovated building that was once a Fina gas station and, more recently, Real Food Nation, a restaurant that didn’t succeed but had a lot of fans. Getting there requires a field trip — it’s 11 miles from the Plaza — but it doesn’t take long, usually around 20 minutes. You can stay on Old Las Vegas Highway the whole way — rolling past Harry’s Roadhouse and what used to be Bobcat Bite — or take I-25 to exit 290, which leads to the Eldorado community and Galisteo. Go left off the ramp instead of right, and you’ll see it soon. There’s ample parking.

Café Fina’s owner, local restaurant veteran Murphy O’Brien, launched it in 2012 with a breakfast-and-lunch-only menu that, as of early December, has been expanded to include dinner on Friday, Saturday, and Sunday nights. (Though this development isn’t mentioned on its website, it is on the café’s Facebook page, which is more actively maintained.) The interior is spacious and bright, with big windows that offer views of the rolling foothills that characterize this part of Santa Fe County. You order at a wide counter that has a bakery case to the left and other baked goods — including quiche — in the middle. Don’t overlook the pastries, pies, cookies, and cakes. Everything we tried on two visits — Meyer lemon Shaker pie, pecan-sour cream coffee cake, and apple galette — was very good.

The café’s daytime menu combines pancakes, egg dishes, salads, Southwestern breakfast staples like migas and a breakfast burrito, sandwiches, and a cheeseburger that dares to feature poblano chile instead of New Mexico green. (More about this heresy in a moment.) On a recent breakfast visit, I ordered the huevos motuleños, an old classic that shows up in Diana Kennedy’s influential 1972 book, The Cuisines of Mexico, in which she describes the dish as “huevos rancheros with Yucatecan flourishes.” Café Fina’s chefs have localized their version to fine effect, using red chile instead of the tomato-based sauce that Kennedy calls for. This was a perfect meal, consisting of two fresh, fried eggs on a homemade corn tortilla with a combination of black beans, green peas, feta cheese, and sautéed sweet bananas on the side.

My companion ordered the basic breakfast — two eggs, hash browns, and toast — and was mostly pleased. The only problem was the eggs, which she ordered poached. Not every restaurant will even do poached eggs these days, so hats off to the place for giving it the old whirling-water try. But the whites came out rubbery, which probably means the water was too hot. On the plus side, the hash browns and toast were good, and the Mexican mocha she ordered was excellent — hot enough and perfectly sweetened, with just the right balance of cinnamoned chocolate and robust but mellow coffee. Another hit was the slice of pecan-sour cream coffee cake we shared: It was moist and full of nutty, spicy flavor.

A second visit, for dinner, was also enjoyable, revealing a couple of small problems that will probably be fixed soon. One is the nighttime illumination, which comes primarily from overhead track lights that are spiky on the eyes at some tables. The dinner menu is small at this point, but that’s most likely going to change as a customer base develops. O’Brien partners on the dinner selections with local chef Chris Galvin; the two carry over the chile cheeseburger from lunch, but also offer swankier entrees like fried oysters, seared salmon, and duck confit. All of these would go well with a glass of wine, and those in your group who aren’t doing any of the chauffeuring will feel a pang of regret that alcohol isn’t available. Good news on that front: The café should be licensed to serve alcohol by early February.

My companion that night ordered a cup of split pea soup — it was rich, dark, and deliciously hammy — and a veggie enchilada loaded with zucchini, asadero cheese, and red chile sauce. She loved it, along with the sides of black beans, slaw, and cilantro rice. The best thing we had, though, was the polenta appetizer, which was surprisingly light, delicately crispy on top, and herbed perfectly with rosemary. It comes plated in a pool of Gorgonzola sauce that contains traces of breadcrumbs and scallion greens.

I’d been brooding about that poblano chile cheeseburger, so I went for it. Many burgers these days are a mess — wobbly stacks of ingredients that end up squirting out of your hands — but the one on offer here is a tidy creation that comes on a ciabatta bun. I’m not always a fan of poblano chile, but it worked well in this burger, giving it a mildly hot, smoky taste. The fries that came with it were nothing special. But that seemed minor, considering all the good things I’d had. I’ll definitely be going back for more of Café Fina’s creative and affordable food. We’re lucky it’s part of the local scene. ◀

Café Fina has developed a loyal following since it opened in 2012, and it deserves the business. The food is fresh and good, the servers are friendly, and the setting makes you feel welcome and relaxed. Almost everything here is clicking, and the restaurant will soon be serving beer and wine, which will really boost its developing three-nights-per-week dinner menu. Meanwhile, this spot should definitely be on your go-to list, especially for breakfast and lunch. Recommended: huevos motuleños, crispy polenta with Gorgonzola sauce, veggie enchilada, and pecan-sour cream coffee cake.

Breakfast for two at Café Fina:

Dinner for two, another visit:

Ratings range from 1 to 5 chiles, including half chiles. This reflects the reviewer's experience with regard to food and drink, atmosphere, service, and value.

My bi-monthly visits to NM for my work with REEL FATHERS (reelfathers.org) always begin with breakfast or lunch at Cafe Fina. The eats and staff couldn't be better -- and the ambiance always feels welcoming.

My favorite breakfast dish is the migas -- hearty/delicious/filling and shouts: "You're in NM!" The coffee is served in generous size ceramic glasses and refills are welcomed. I also favor their fresh organic orange/carrot/ginger juice as I utilize their wi-fi hot spot -- although I try not to linger too long on weekends so as not to hog a coveted table, I've always felt welcome to stay as long as I need to.
For lunch, I favor "One for David" the panko-crusted fish sandwich. It's cooked just right and generously portioned.

And don't leave without having of of their elegant and scrumptious ginger cookies.

I can't wait for my next visit when I can try out their new dinner menu!