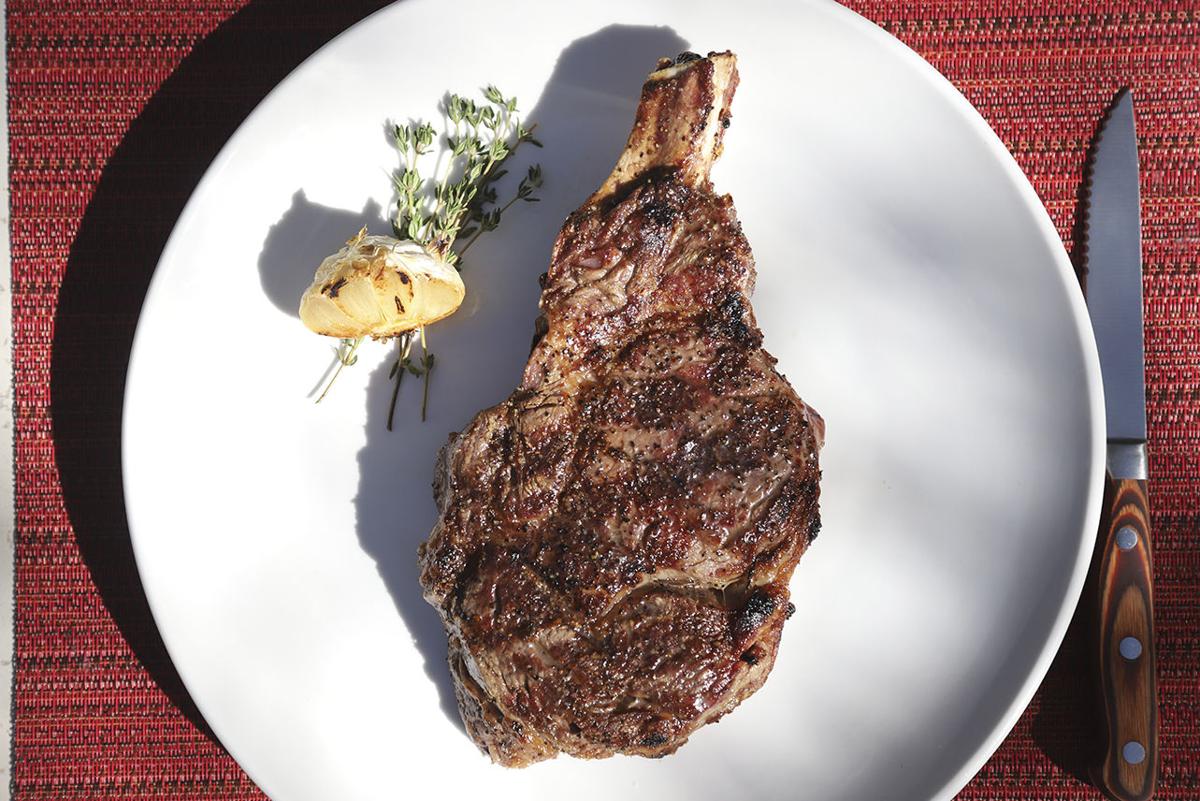 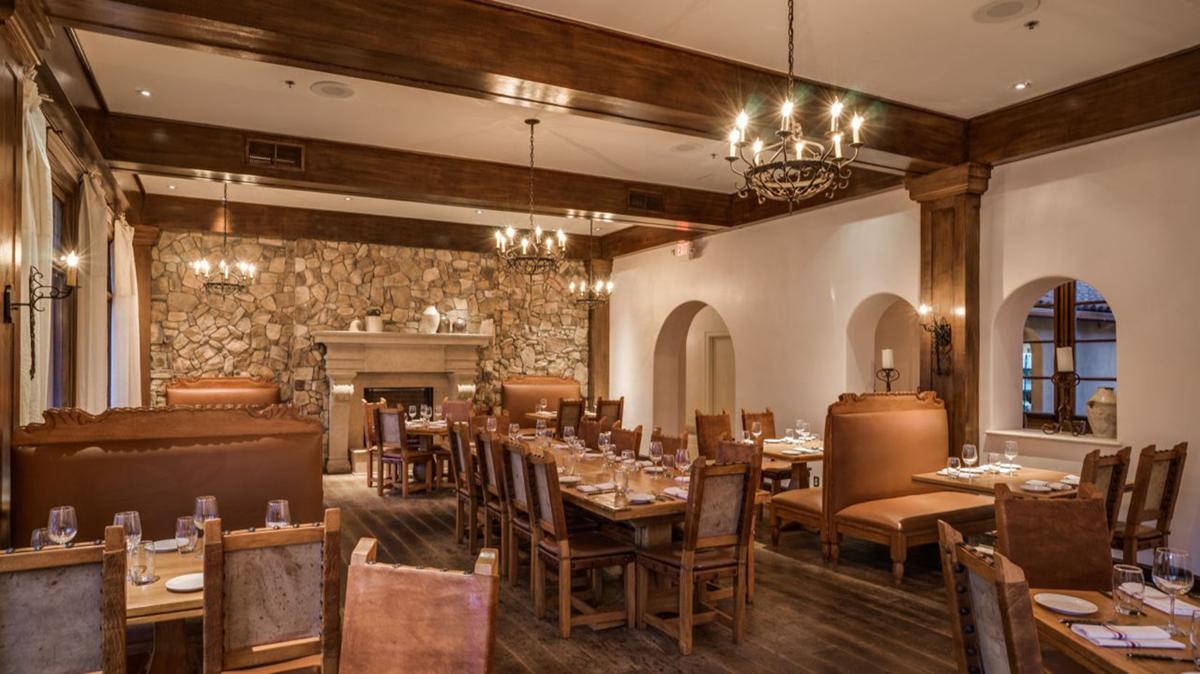 "Hang on,” I said to my dining companion. The silky luxury of the USDA Prime steak tartare in my mouth was causing a lull in conversation. “I’m having a meat moment.”

In this brief window before the New Year, visions of crusted medium-rare filets and succulent lobster tails tend to dance in our heads. ’Tis the season for the kind of decadence we usually parcel out over the rest of the year. But at Market Steer Steakhouse, the new dining destination at the Hotel St. Francis, such occasions are a year-round affair.

On two recent dinners at the establishment, which replaced the former Tabla de los Santos this past fall, I saw more than one diner forking a piece of steak, then closing their eyes for a second of blissful remove that matched my own. Chef-owner and former world-champion rodeo roper Kathleen Crook knows her beef, having been raised in a cattle-ranching family in Artesia. With her partner, general manager Kristina Goode, she opened Steakhouse No. 316 in Aspen before relocating to Northern New Mexico. Market Steer pays tribute to Crook’s bona fides with the restaurant’s logo, which is based on her family’s livestock brand. All the beef served is 100-percent USDA Prime, with a selection of six cuts: two filets, a Kobe flat-iron, a New York strip, a cowboy ribeye, and a whopping 24-ounce porterhouse.

One evening, we were quickly impressed by our appetizers: first, a basket of crusty-soft bread and spicy whipped green chile butter, and then the ostentatious presentation of a gargantuan stack of golden breaded onion rings. These came to the table skewered by a steel branding iron that bears — you guessed it — the chef’s family brand. A serving of the Vidalia rings comes with a tangy house-made steak sauce; the mountain of fried goodness is enough to feed five. Meanwhile, at my end of the table, the smoky-sweet dimensions of the tender tartare and its accompanying fennel-studded cheese crackers were being played up by a glass of the bold, zesty Klinker Brick Old Vine Zinfandel.

All of the sides at Market Steer come family-style and in ample portions, but here we encountered a few missteps. The Boursin creamed spinach sounded like a fine idea, but the cheese sat leadenly atop the spinach, overpowering the greens. The subtly flavored fontina and black-truffle gratin also suffered from an overabundance of cheese, as well as woefully undercooked potatoes.

The 8-ounce filet is a beautiful cut. Crusted with an addictive spice rub, our medium-rare serving arrived rather lukewarm on a plate all its own. But its ruby depths comprised layers of big flavor that were complemented by a garlicky and piquant chimichurri sauce.

Meat is the main event here, we had surmised by then, an idea that was confirmed by the blackened cauliflower “steak,” the menu’s lone vegetarian entrée. It’s a head on a plate sprinkled with spices, paired with a goat cheese and leek fondue with pecan pesto. The inadequate amount of cheese sauce did little to make up for the blandness of the cauliflower, which came atop a bed of dull succotash.

On another visit, Crook’s glistening New York strip with a side of smoked blue-cheese butter had my Empire State pal in paroxysms of meat beatitude. We’d begun that dinner with the jumbo lump crab cakes, a marvel of sweet crustacean bits blended with a smoked-onion remoulade and paired with a delicate cider-vinegar-dressed slaw. We also relished the lime-chile tang of the bacon and butter salad, a tumble of butter lettuce, buttermilk dressing, citrusy goat cheese, and chile pepitas with a few brown-sugar-sweet strips of thick house-cured bacon served alongside it. The quirkiness of the appetizers made a good foil for a memorable steak.

That evening, we fared far better with sides, too, basking in the silkiness of olive-oil whipped potatoes and a medley of roasted, herby wild shiitake, beech, oyster, and crimini mushrooms. Though it arrived a tad overcooked, once we dug in, our lobster tail contained a mother lode of rich white meat — though in keeping with the bacchanalian theme, we half-wished we’d gone the menu’s suggested Oscar route and gussied it up with asparagus and Béarnaise.

Such luxury has a price, of course. By both meals’ ends, we were unable to even contemplate dessert — though tempted by the menu’s red chile spiced cheesecake and bourbon pecan bread pudding — and eyeing the heftiness of our bill. But for a special occasion, Market Steer is a damn delight.

Crook recently alluded to opening Market Steer for weekend brunch in the springtime, however, which should yield more modestly priced fare. And those savvy diners who regularly seek out the scaled-down bar menus of high-end eateries are in luck — next door, Secreto Lounge serves a short list of Market Steer items that include a fried-chicken sandwich, steak frites, a burger, and a steak sandwich, providing a few more reasons to indulge in everyday extravagances. ◀

Noise level: Quiet, but marble environs can make it clattery

Dinner for two, another visit: