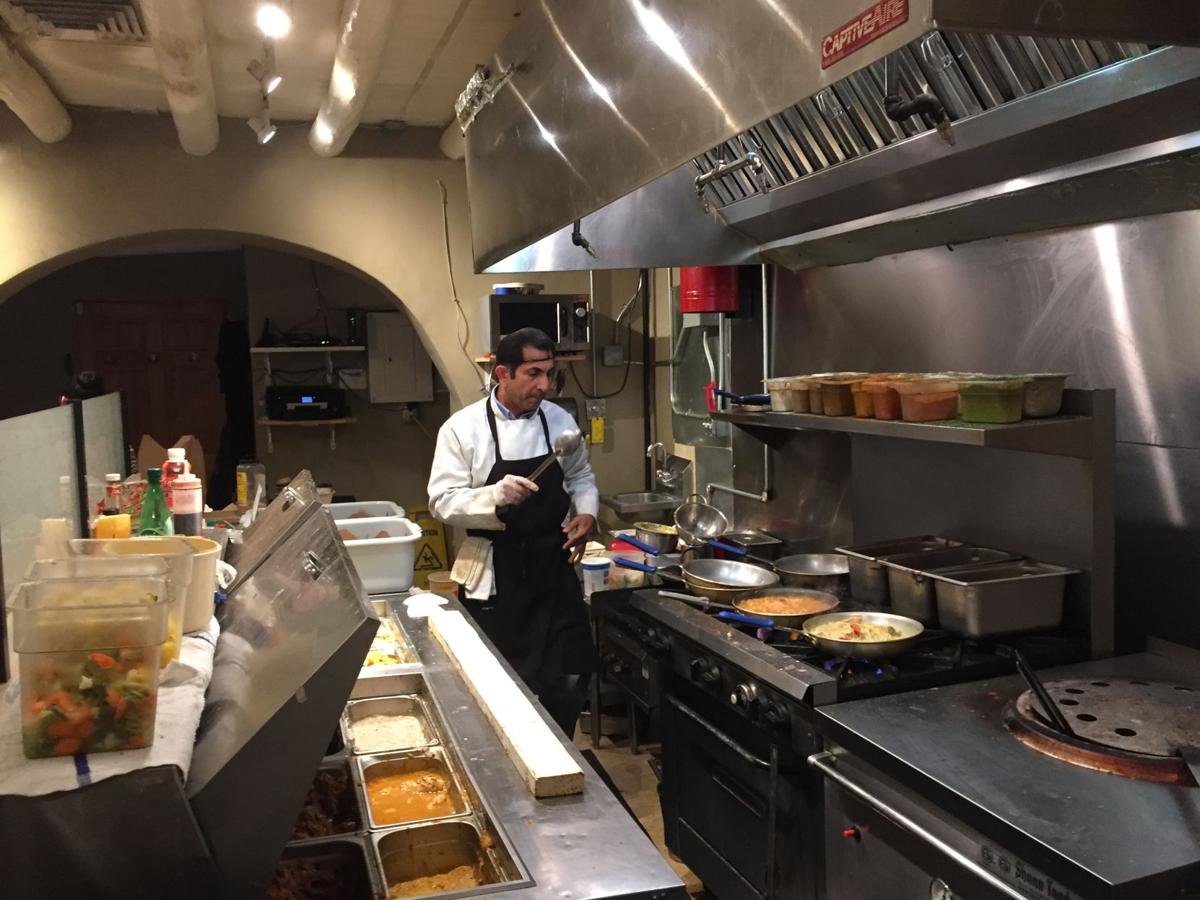 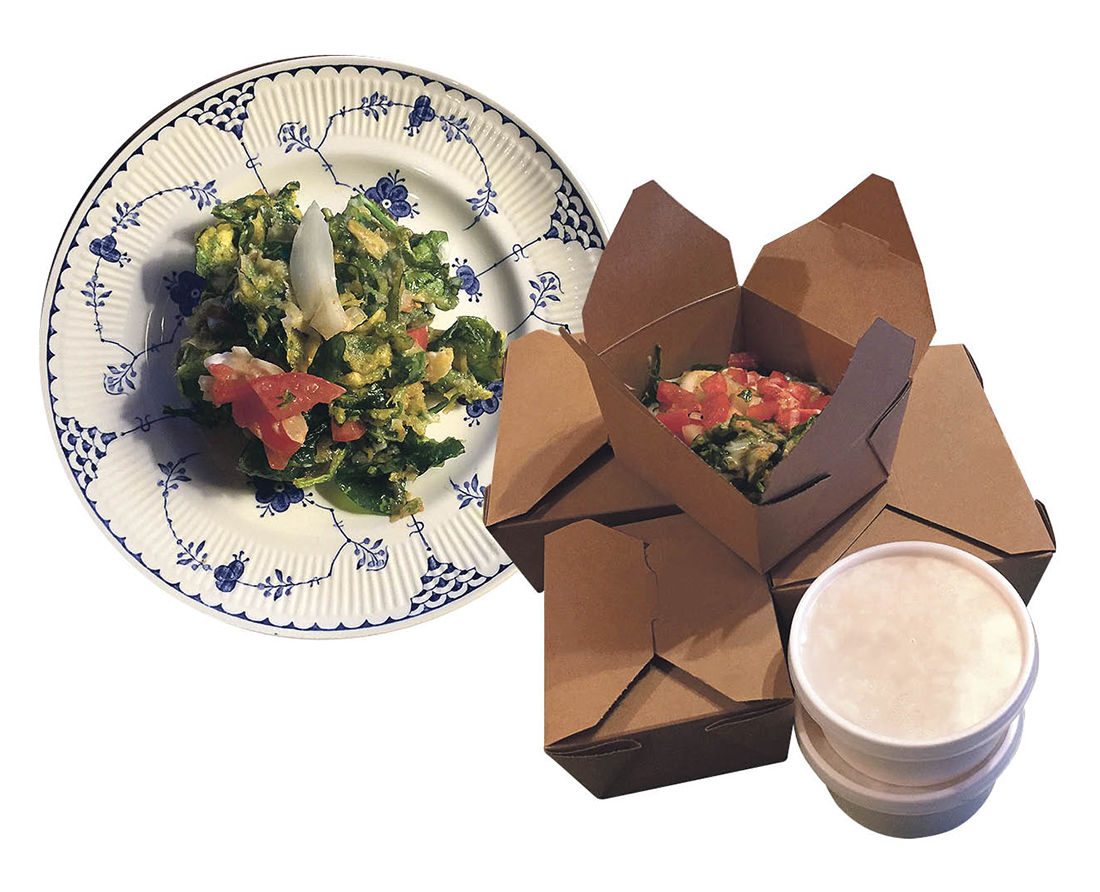 In classical Indian music, a raaga provides a structure composed of a minimum of five notes within which a musician can improvise. For a chef like Pramod “Paddy” Rawal, those five notes could be the basic sweet, sour, bitter, spicy, and hot flavors of traditional Indian cuisine, to which he adds more Western flavors as the spirit moves him.

Rawal emigrated from Mumbai to the United States in 2001, stopping first in Michigan and then Albuquerque to open restaurants in both locations. Raaga, Rawal’s restaurant specializing in “modern Indian cuisine,” debuted in Santa Fe in 2011, acquiring much local and national acclaim before he closed it in the fall of 2017 on the advice of his doctor. But you can’t keep a good chef away from his stoves for very long. In fall 2018, Rawal went back to business with Raaga-Go, a takeout-only shop serving a wide range of traditional Indian dishes alongside some of the most popular offerings from his earlier brick-and-mortar incarnation.

Fans of spinach chaat — a starter of lightly coated fresh spinach leaves flash-fried and tossed with crunchy raw onions and sweet red tomatoes, the whole dressed with a slightly sweet yogurt sauce — will find it here. Our favorite order from Raaga-Go, the salad held up well during the trip home. Kurkuri bhindi, tiny, flash-fried okra pods dusted with warm spices and sided with a container of a bright house-made pico de gallo, also traveled nicely, losing no flavor or crispness along the way.

The hyderabadi lamb boti kebab, an example of Rawal’s blending of Indian technique with European flavors, was bathed in a fennel, mace, and balsamic-scented marinade before being grilled in the high-temperature tandoori oven. All but one of the six large chunks of locally sourced lamb was tender, and the juices at the bottom of the container made a flavorful sauce for the accompanying basmati rice.

Rawal also knows his way around more East Asian specialties like pad Thai and green curry. The mild green curry, which offered a choice of shrimp, beef, or chicken (the latter was our selection), featured green beans, broccoli, eggplant, basil, peppers, and onions served over linguini. The sauce was creamy enough to make us wonder if it also contained coconut milk, though none was listed on the menu.

The pad Thai was also creamier than we have come to expect, though the sweet-sour tamarind sauce was well-balanced. We couldn’t find any peanuts among the usual pad Thai suspects (rice noodles, eggs, bean sprouts, and scallions) but the six large, perfectly cooked shrimp more than made up for that, demonstrating a keen awareness of the effects of residual heat: they neither dried out or shriveled up on the ride home.

Many dishes are available at your choice of four heat levels: mild, medium, hot, and hell. We requested all but one at medium mode so the heat would not overwhelm the more subtle flavors and aromas. We need not have worried; our tongues found the medium-heat level more mild than hot. That was not true of the vegetarian tikka masala, which we ordered “hot.” The thick tomato-based sauce enrobing a mélange of chickpeas, zucchini, carrots, eggplant, and cauliflower was hot enough to make my eyes and nose run. I would not want to take a trip to Raaga-Go hell.

Not all the dishes we tried were impressive. The garlic-cilantro naan, wrapped in foil, was cold and soggy; the bland potato-packed samosa emerged from its container in the same unhappy condition. The beet, green pea, and paneer tikki, a dense, pan-fried cake, retained its crisp exterior but had little flavor.

The chicken biryani fared even worse. Biryani traditionally layers very fluffy basmati rice with a precooked protein (Raaga-Go offers vegetables, beans, shrimp, lamb, fish, and chicken), then bakes it to meld the flavors. The large chunks of chicken in our takeaway box were tasteless, and the rice was bland and gummy. The dish was an experience more reflective of a shopping mall buffet than a gourmet restaurant, a surprisingly sad showing from a chef we’ve come to respect.

Many of these problems may be related to the difficulty of packing hot food in containers that allow them to steam, cool, and gradually lose their hallmark textures and flavors. The length of time the order sits in its bag waiting for pick-up also seems to play a part in the quality of the takeaway. When we ordered online several hours in advance, our bag was already packed and waiting for us at the designated time; these were the dishes we found most unsatisfactory. Another order, placed about a half-hour before pick-up, was still being prepared when we arrived; packed while we waited, that bag contained most of our favorite dishes. Hopefully, over time, Chef Rawal will find a way to balance the need for efficiency with a finer dining experience.

Located between the Pink Adobe and Rio Chama restaurants on a narrow strip of Old Santa Fe Trail with no legal street parking, Raaga-Go can pose a difficult, but not insurmountable, parking challenge. While the shared lot behind Rio Chama often fills up at night, the state lot across the street opens to non-legislature parking after 5 p.m. The restaurant has also partnered with three delivery services: Doordash, Fetch Delivery, and Uber Eats.

Raaga-Go offers a welcome change to Santa Feans who need a break from green-chile-with-everything cuisine and who don’t or won’t cook at home. While the quality of the takeout currently ranges from excellent to OK to no thank you, Paddy Rawal has the chops to bring it all together. We’ll be checking on that biryani sometime soon. ◀

Chef-restaurateur Paddy Rawal is back on the Santa Fe culinary scene a year after closing Raaga, his popular Indian restaurant in the Railyard district. Reinvented as a takeout-only spot tucked into a niche near the State House, Raaga-Go offers some of the more popular dishes from Rawal’s past incarnation alongside a large selection of classic Indian fare, some of which travel better than others. Recommended: Spinach chaat, kurkuri bindi, spinach curry, hyderabadi lamb boti kebab, pad Thai with shrimp.

Dinner for three from Raaga-Go:

Another dinner for three from Raaga-Go: