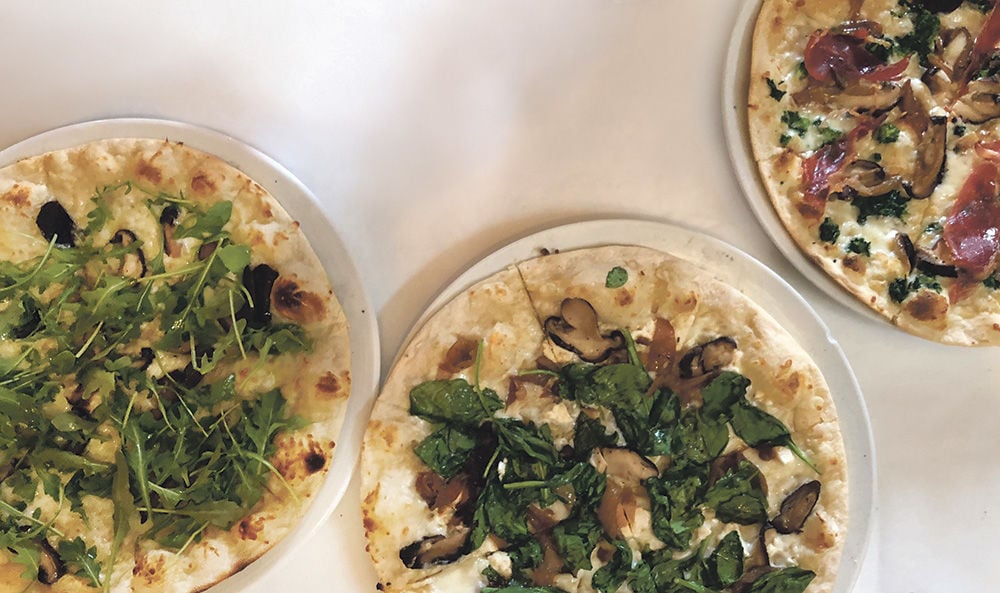 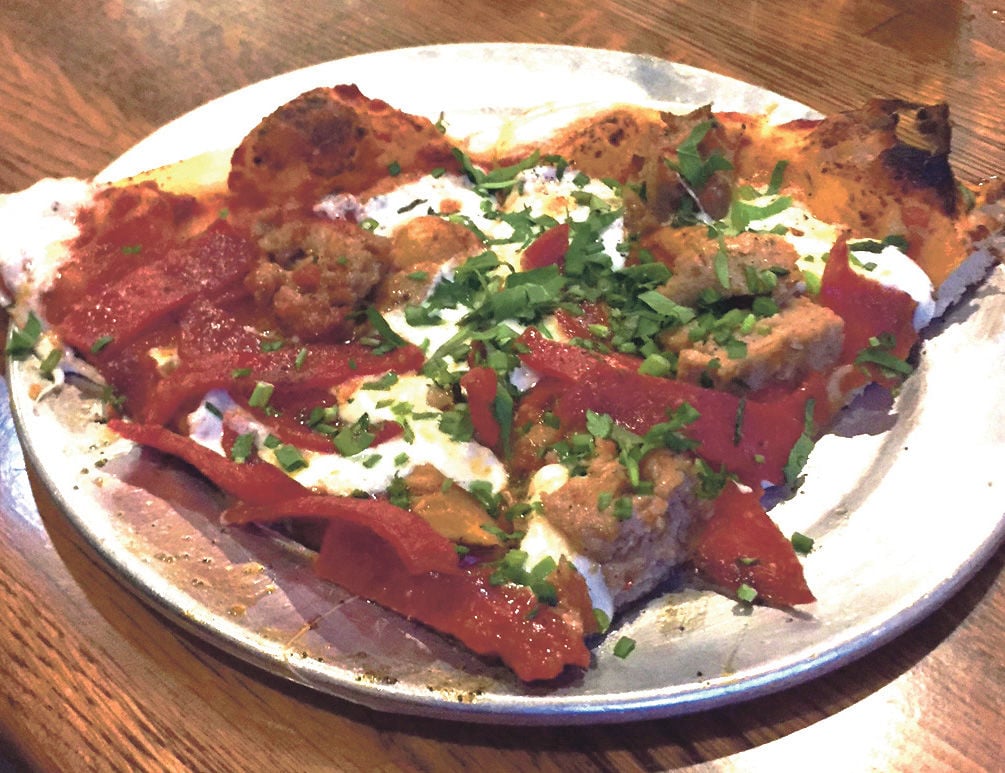 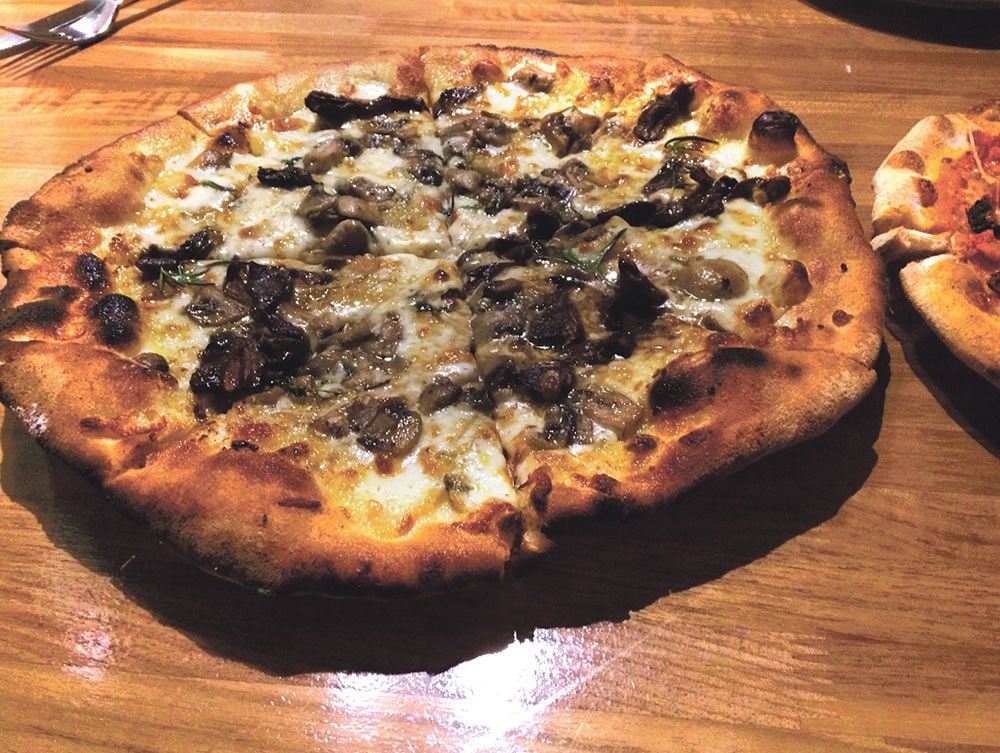 When it comes to pizza, Santa Fe is a far cry from spots like Brooklyn or New Haven, Connecticut, where the nation’s most traditional (and perhaps best) thin-crust pizza experiences originated. And though our town has a number of respectable pizzerias dedicated to their crafts, a few more unusual pizza suspects are lurking on restaurant menus around the city. Here are a few good pies at places you might not immediately think of — where the gourmet pizza, often fired by wood, turns out to be a sit-down dinner experience worth writing about.

The one they call Dr. Field Goods

The reputation of Dr. Field Goods Kitchen (2860 Cerrillos Road, 505-471-0043) is built on its commitment to sourcing as many ingredients as possible from local farms and ranches. We were happy to see that this philosophy extends to the ingredients on pizzas produced in the restaurant’s prominently placed wood-fired oven.

A basic cheese pizza ($13) generously topped with pork sausage ($3.50) and pepperoni ($1.50) was a meat-eaters’ delight. The Italian-style sausage was house-made, as was the tomato sauce and fresh mozzarella. We got to watch the pizzaiolo hand-tossing the dough before he laid it on a wooden paddle, topped it, and slid the whole thing into a 900-degree oven to brown and blister quickly, creating the charred bubbles we like to see around the raised edge of the crust without burning the meats or drying out the cheese.

The crust of a take-out pizza Margherita ($14) was less successful, more blond than brown in color. With little of the crunch and smoky aroma contributed by blistering, the presence of the yeast in the dough was also more apparent. The pizza itself, though, was excellent. Some of the sweet heirloom tomatoes grown in a local greenhouse that were visible on the counter behind the bar appeared on the pie, thinly sliced and barely warmed atop softly melted slabs of super fresh-tasting house-made mozzarella, the whole sprinkled with coarse salt and slivers of fresh basil, paying tribute to the colors of the Italian flag and the 19th-century queen of Savoy for whom the pizza Margherita is said to be named.

Our favorite, though, was the Pizza de Gallo ($16), a Land of Enchantment take on the Margherita that features more of those tomatoes — diced this time — along with some minced onion and garlic, sliced jalapeños, and smoked mozzarella, the whole of which is garnished with a scattering of chopped fresh cilantro. The crust was once again perfect, and the toppings are a fine example of Dr. Field Goods’ signature New Mexico-fusion approach to combining local flavors and ingredients with classic preparations to produce something uniquely true to the place of its birth.

In her review of Ugly Delicious for The New Yorker, Helen Rosner writes that chef David Chang’s new documentary series, now streaming on Netflix, “isn’t about what food is, it’s about what it means, and about the choices people make that change its meaning.” The program’s first episode focuses on pizza in its many iterations, from Brooklyn to Tokyo, with Chang noting that what is authentic in Naples isn’t necessarily authentic to other parts of the world. We think the chef who built an empire defying convention would approve of Dr. Field Goods’ Santa Fe take on the classic Margherita — no queen, imported San Marzano tomatoes, or Mozzarella di Bufala Campana required.

We sampled a few of these out-of-the-ordinary pies and discovered they were both subtly delicious and surprisingly similar. The Funghi ($14.95) begins with roasted garlic purée and mozzarella, across which shiitake mushrooms are scattered, and it’s all practically hidden beneath a veritable carpeting of delightfully peppery arugula. The kitchen has a gentle hand with the truffle oil, which can range from off-putting to headache-inducing when overapplied.

The mellow goat cheese pizza ($15.95), again starting with roasted garlic purée, repeats the shiitake mushrooms and mozzarella, with the occasional dollop of goat cheese offering a milky tang; caramelized onion creating an almost candy-like sweetness; and slightly wilted spinach serving as nutritious greenery. You’ll notice a pattern by the time you inspect the ingredients of the rapini (broccoli rabe) pie ($14.95): the purée, mozzarella, caramelized onions, and shiitake mushrooms all make encores. Emerald broccoli rabe and reddish-pink wisps of prosciutto di Parma punctuate the surface, giving the wheel some pops of color. The otherwise mellow combination benefits from a hit of the eponymous ingredient’s vegetal bitterness and the meat’s salty nuttiness.

Pranzo’s crust hits a lot of the right notes: thin and crisp but not crackery, with just the right amount of chew. I missed the charred blistery bits characteristic of many Italian pies, but I sensed that, on the night we visited, their lack was more a cautious exception than the deliberate rule. And anyway, those tender bits of leftover crust are perfect for casually dabbing into Pranzo’s garlic-, herb-, and chile-infused olive oils.

On the outskirts of town, Harry’s Roadhouse (96-B Old Las Vegas Highway, 505-989-4629) is known for its rather varied menu, but you might still be surprised to learn that the list includes pizza. Plenty of easy classics are here, from plain ol’ kid-friendly cheese to the eternal Margherita, as are the controversial Hawaiian, a pizza rendition of eggplant Parmesan, and a few pies loaded with meats and/or veggies. The crust balances crisp and chewy nicely, and it has an intriguing faintly wheaty sweetness.

On the slightly swankier style is the wild mushroom pizza ($10.95), which blends gourmet and old-fashioned goodness — traditional tomato sauce and mozzarella littered with shiitake, portobello, and other wild mushrooms (for extra earthy goodness, you can add prosciutto for a small upcharge, but it’s perfectly enjoyable as is). On our visit, the kitchen had added a healthy handful of chopped fresh basil — never a problem in my book.

The white pizza ($9.95) is pleasantly redolent of fennel from crumbly sausage and delivers the occasional garlicky punch (slivers of the stuff are strewn here and there). Asiago gives it an extra salty kick. The broccoli helps the whole affair feel a bit more virtuous, though if you’re ordering pizza for dinner, nutrition’s probably not at the forefront of your thoughts.

Village of the damned good pizza

Over in sleepy Tesuque, two exemplary versions of good old-fashioned wood-fired pizza are but a five-minute walk from each other. At the revamped El Nido (1577 Bishops Lodge Road, 505-954-1272), now helmed by executive chef Cristian Pontiggia, the pizzas are infused with the flavors that come from using different types of wood; on our visit, the kitchen burned applewood and oak as pizzas were slid in and out of the open kitchen’s oven. The Toscana ($18), a white pizza with house-made mozzarella, fontina, organic mushrooms, dried porcini, a kiss of truffle oil, and fresh rosemary, is a sight to cherish, with glinting olive oil pooling in the hollows of the stretchy, melted cheese. Those much sought-after dark-brown bubbles edge the substantial, salty-sweet crust, and a full-flavored magic pervades the dough. Every element is both simple and sublime.

For a more complex mingling of flavors, we also ordered the Capricciosa ($17). Topped with San Marzano tomato sauce, mozzarella, black olives, mushrooms, sun-dried tomatoes, and prosciutto, the sophisticated combo is a savory and substantial delight, with each ingredient obsessively spaced apart on the pizza so as to provide the best possible bites. Years ago, living in Brooklyn, I often rode my bike to Di Fara Pizza in Midwood, where Domenico DeMarco, a pizzaiolo who is now in his eighties, still meticulously arranges his bespoke pies every day, hand-finishing them with swirls of olive oil and snips from the basil plants growing on the pizzeria’s windowsills. The attention to detail on El Nido’s pizzas recalls DeMarco’s craftsmanship, which is the highest possible compliment I can give a pizza.

Down the lane, Tesuque Village Market (138 Tesuque Village Road, 505-988-8848) makes pizza time an al fresco event, serving up thin-crust pies from the enormous wood-burning outdoor oven on their covered patio, which affords a good view of the road. The TVM reminds me of the Southern California hippie country stores of my childhood, and the restaurant’s laid-back ambience, along with good people-watching opportunities and a strong wine selection in the market, make it a perfect stop after a hike through the cottonwoods and aspens of nearby Winsor Trail. While we were unimpressed by their version of a Margherita pizza ($18), which seemed to lack basil altogether, we were blown away by another pizza topped with locally made chorizo and green chile ($21). The thick chorizo slices were smoky and spicy, the chile piquant, and a blanket of bubbled mozzarella is delightfully stretched over the crackery — but chewy! — crust, with a sharp tomato sauce lying in wait underneath.

The concentration of standout pizza in Tesuque presents something of a Sophie’s choice for day trippers to the village. The good people of Tesuque, however, have much to be grateful for. — Molly Boyle