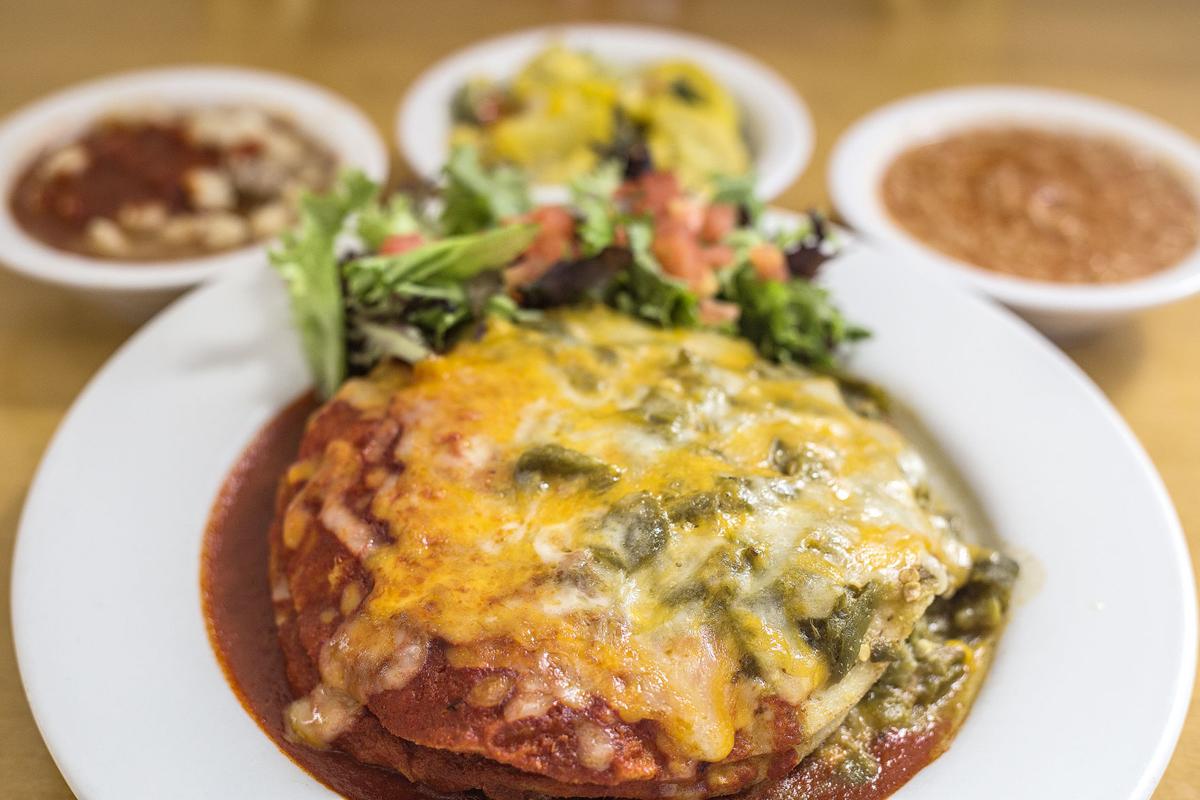 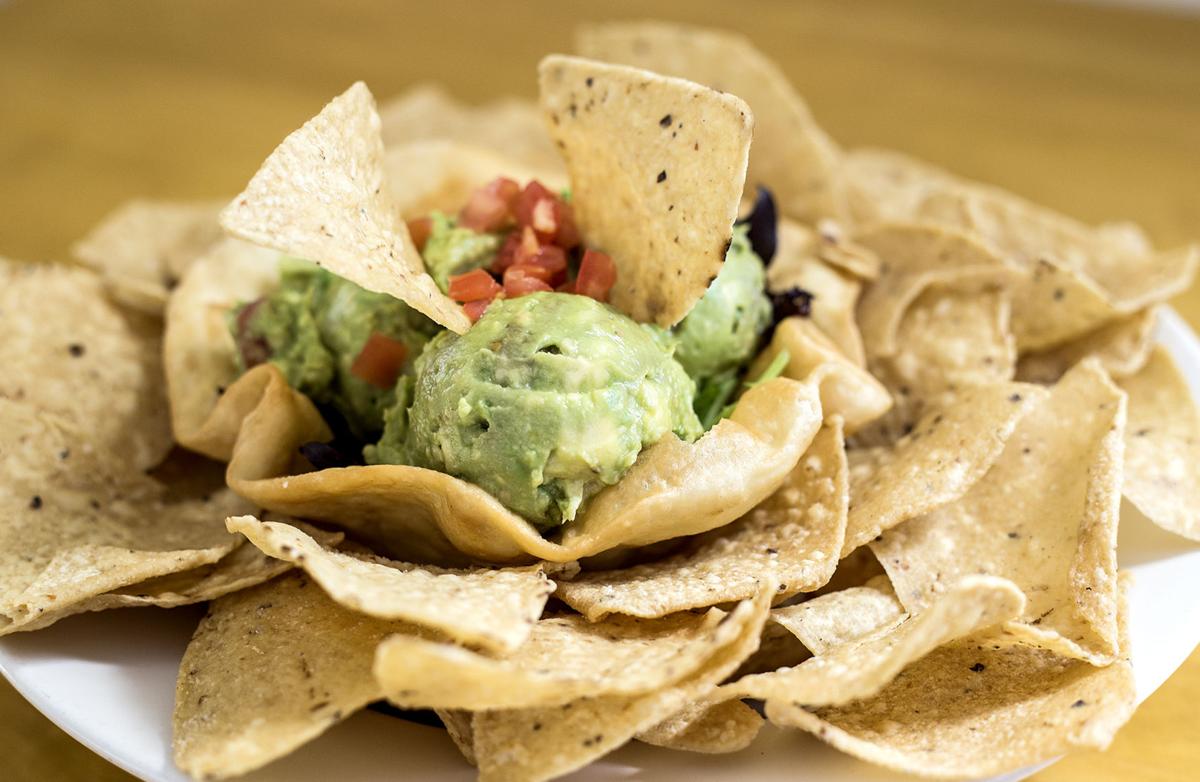 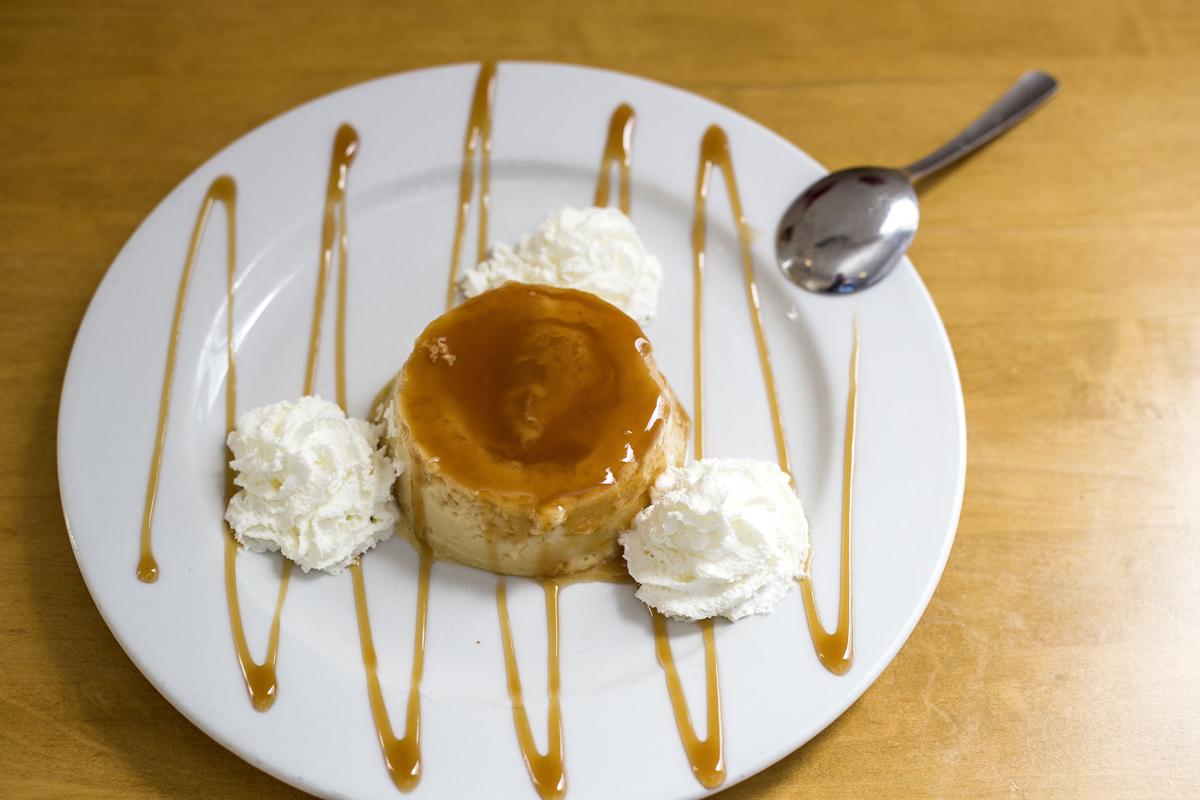 Noise level: bustling, can be loud depending on time of day

The standard for the New Mexican food that I’ve come to expect in Albuquerque follows a classic pattern of red and green chile sauce; salsa; tortillas; small amounts of chicken, beef, or pork; and a lot of cheese. There’s all of that on the plate at Cocina Azul, but there are also surprises, which makes me curious. I have never seen such attention to the preparation of the meat, nor seen the large amount included in the dishes that I ate at Cocina Azul. I’ve never seen the range of inventiveness, either.

The origins of New Mexican food are an endlessly fascinating living historical puzzle, and it’s fun to try and figure out where the Cocina Azul food fits in. Spanish/Sephardic recipes came here with colonists through Mexico and picked up new things along the way. Once the Spanish settlers found out how hard it was to make a living from the soil, they started cultivating crops like the Native American “three sisters” — corn, squash, and beans — as well as our beloved chiles. Nowadays, Mexican influences show up on the plate, too. Every family has its recipes and traditional ways of preparing dishes. And at Cocina Azul, owner and chef Frank Barela Sr. developed recipes that recalled the taste of his grandmother’s dishes and added his love of meat to create his lush, unique New Mexican food. He also recreated recipes for a chile de arbol salsa and street tacos from Mexico. It’s clear he has a deep understanding of and respect for the ingredients.

The original Cocina Azul, started by Barela in 2009, has a well-deserved reputation for good food and fast, friendly service. Everything is made fresh daily, and servers act as if every new customer is a potential regular. The neighborhood — several blocks from Old Town and the museums — isn’t a great location for a restaurant, but Barela does a good business there. Over the years, Cocina Azul grew into a three-restaurant franchise. Last year, Barela sold the rights to the other two locations and kept the original spot on Mountain Road. This summer, the restaurant will have its name on bags of Lay’s chile-relleño-flavored potato chips. Barela and his restaurant manager, Frank Barela Jr., flew to Dallas to work with Lay’s to duplicate the flavor of their relleños so the chips would taste just right.

There’s nothing worshipful about the way the servers hustle, however. After ordering several dishes, we found our table loaded with food, which comes out as soon as it’s ready. (If you want to eat in courses, tell your server when you order.) Also, the servings are large, and if you want to try several dishes, ask to have them split in the kitchen; they’re glad to do it.

We began both dinner visits with appetizers, which were served in fried flour tortilla bowls. The creamy Adrian’s chile con queso ($8.95), pleasantly warm with both Hatch green chile and jalapeños, arrived with sides of a fiery red salsa made with chile de arbol and tomatillo, and a less picante version with chopped Hatch green chile, onions, and garlic in broth. Neither salsa is thickened, and they are served cold. (We like them better warm, so we took them home and heated them up.) Thick, super crispy, low-salt chips are made in-house and are virtually grease-free. Our second appetizer, guacamole, was fresh and chunky with tiny pieces of onion, tomato, and jalapeños ($8.95). It’s as good as it gets and comes with the same salsa sides and chips.

By the bowl, generous servings of homestyle posole and the green chile stew (both $9.50) are enough to share. The posole swims in broth with tender pork, bits of red chile, and a splash of red. Frank Jr.’s Bowl of Green Chile Stew is exactly what I crave and rarely get. It’s made with beefsteak cut into small pieces and simmered until tender, but still slightly chewy. Broth, just thick enough to give the stew body, holds potatoes cubed to the perfect size so that they just fit on a spoon with a piece of meat. The green chile delights but doesn’t disturb. This is everyday, deeply satisfying food.

We tried two of the four enchiladas on the menu, the carne adovada and the creamy chicken (both $14.95). This restaurant is not shy about big servings of meat, and the wealth of carne adovada in this enchilada changed the way I thought about enchiladas with meat. At Cocina Azul, it’s meat with enchiladas, and that’s not a bad thing. I know from a previous, unofficial visit that the brisket enchilada is equally stuffed with tender, long-cooked beef. The tortillas in the enchiladas are tender and fresh, the red or green sauces top notch. With their two side dishes, either of the meat enchiladas can easily serve two light eaters. The creamy chicken enchilada plate with green chile and mushroom sauce is reminiscent of cafeteria fare from elementary school, raised to the level of elegant comfort food. The enchiladas are pleasant and smooth, with rich sauce dotted with bits of green chile.

A variety of sides are available: calabacitas (summer squash) with bits of corn and tomato; posole with a dab of red sauce; whole pinto beans; fideos (soft spaghetti with a tomato sauce); or white rice. All were very good except the fideos, which were overcooked and bland.

Of the eight varieties of tacos offered, we tried the grilled chicken ($12.95), which came with a choice of two sides and guacamole. Of all the dishes we tried, this is the one I wouldn’t write home about. The flavor was underwhelming and the chicken breast dry. Tacos also come with pulled pork, brisket, shrimp, fish, and ribeye, and I look forward to trying one of the others made with slow-cooked brisket or pulled pork.

While many New Mexican restaurants serve green chile cheeseburgers, few make them as big and juicy — or in as many varieties — as Cocina Azul. Sticking close to basics, I ordered the JC Lopez Green Chile Burger, ($11.95), a half-pound of fresh ground Angus beef topped with American cheese, accompanied by “caribe”-style green chile (roasted, peeled, and chopped with salt and garlic) on a soft, toasted specialty bun. The specialty fries are great — medium-sized, crisp, and lightly coated with a thin batter. I would make this my go-to burger if I didn’t want to try some of the others, like Arellana’s Guaca Sopapilla Burger, which adds guacamole and chile con queso.

Desserts hold surprises, too. Cocina Azul has complimentary sopapillas which servers bring out hot, passing them around as soon as they’re made. Golden, soft, puffy, warm, and seemingly grease-free, they make a good dessert topped with honey. (If none have appeared by the time you’ve finished your meal, ask for them.) However, for those who would like a real treat, the flan ($5.95) is akin to crème brûlée: soft and rich, served on a plate ribboned with caramelized sugar (in case one needs a nudge to make that association). ◀