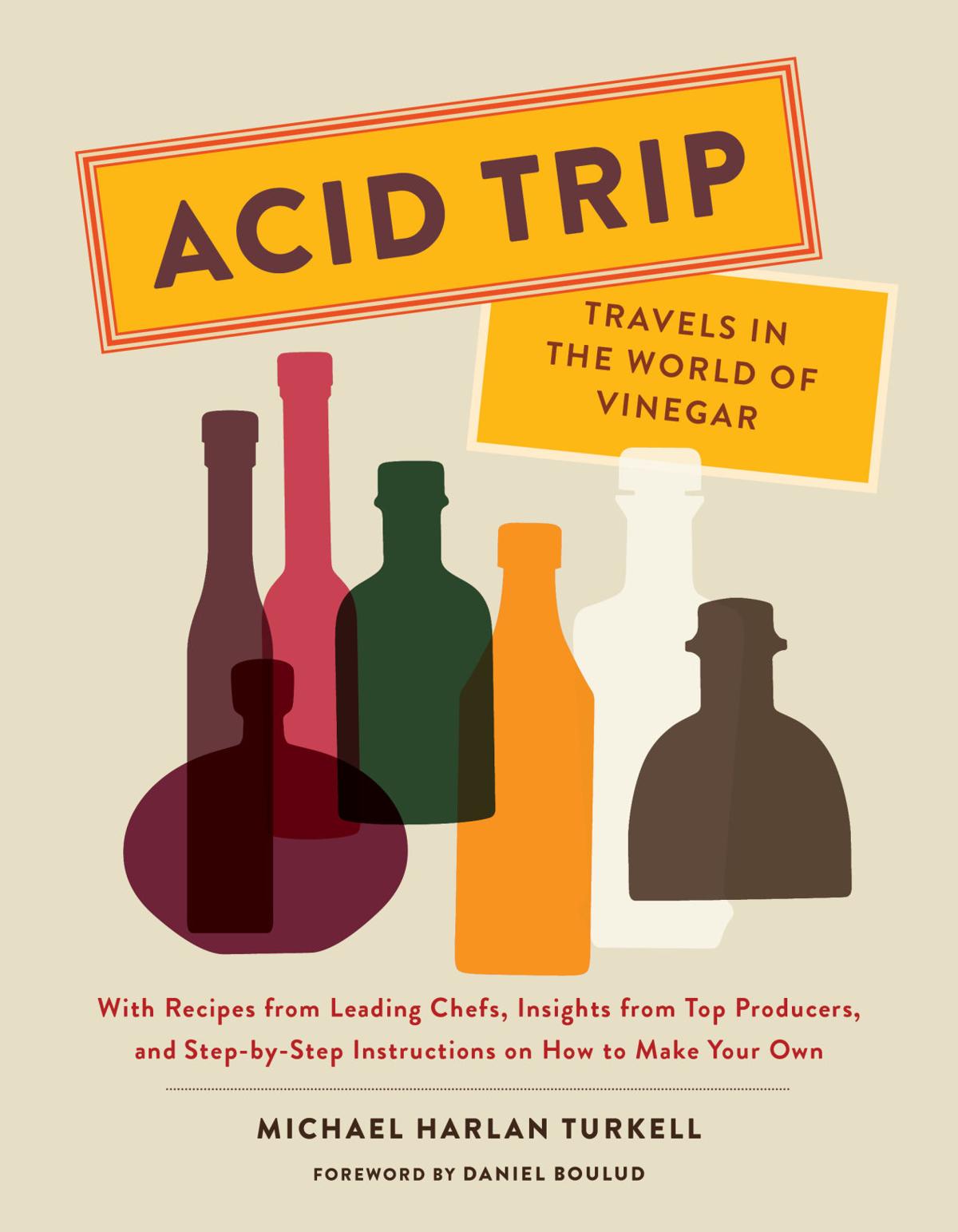 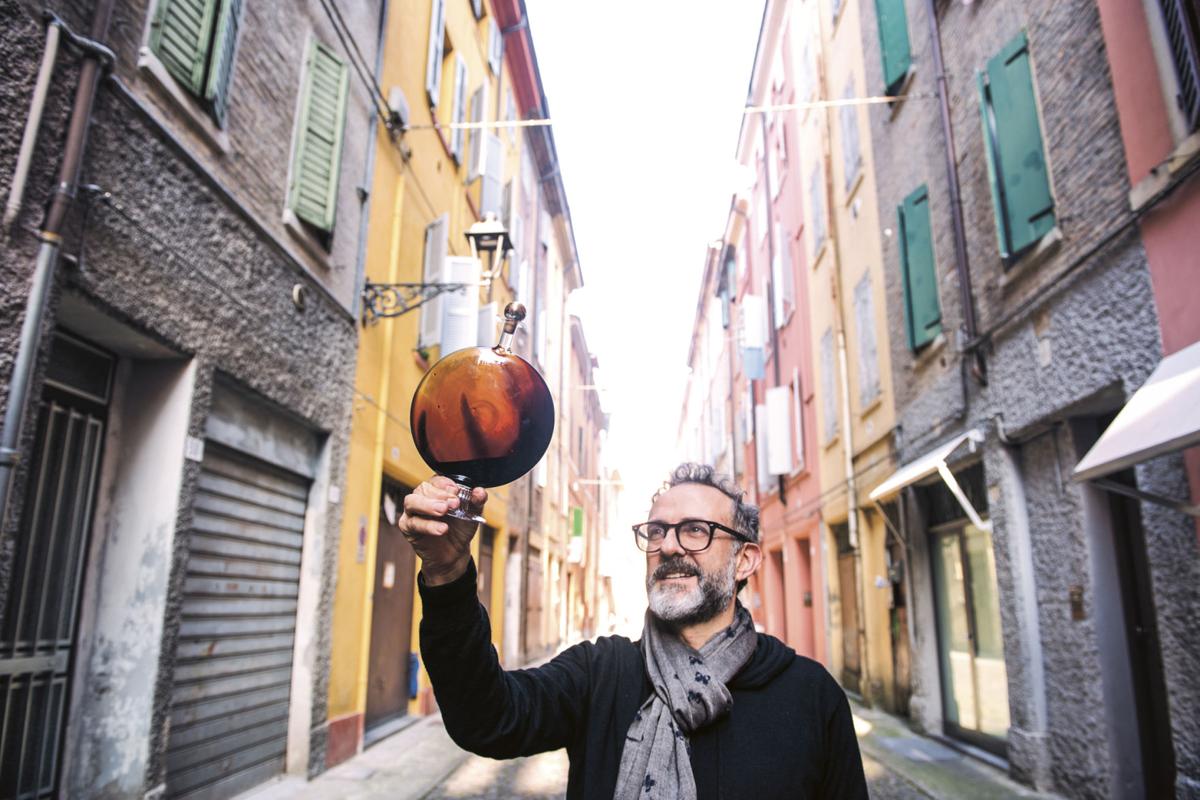 Massimo Bottura, the most famous chef in Modena, Italy, is one of the many artisanal vinegar makers described in Acid Trip; courtesy Abrams Books 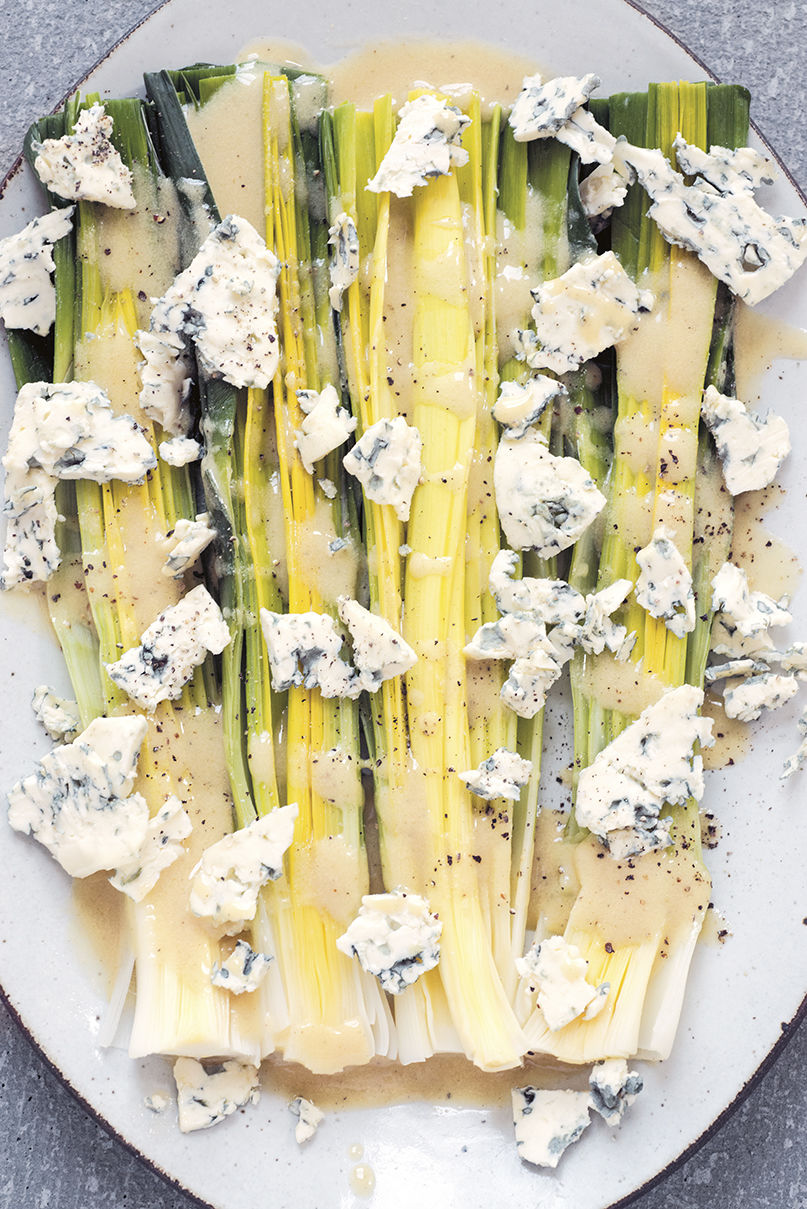 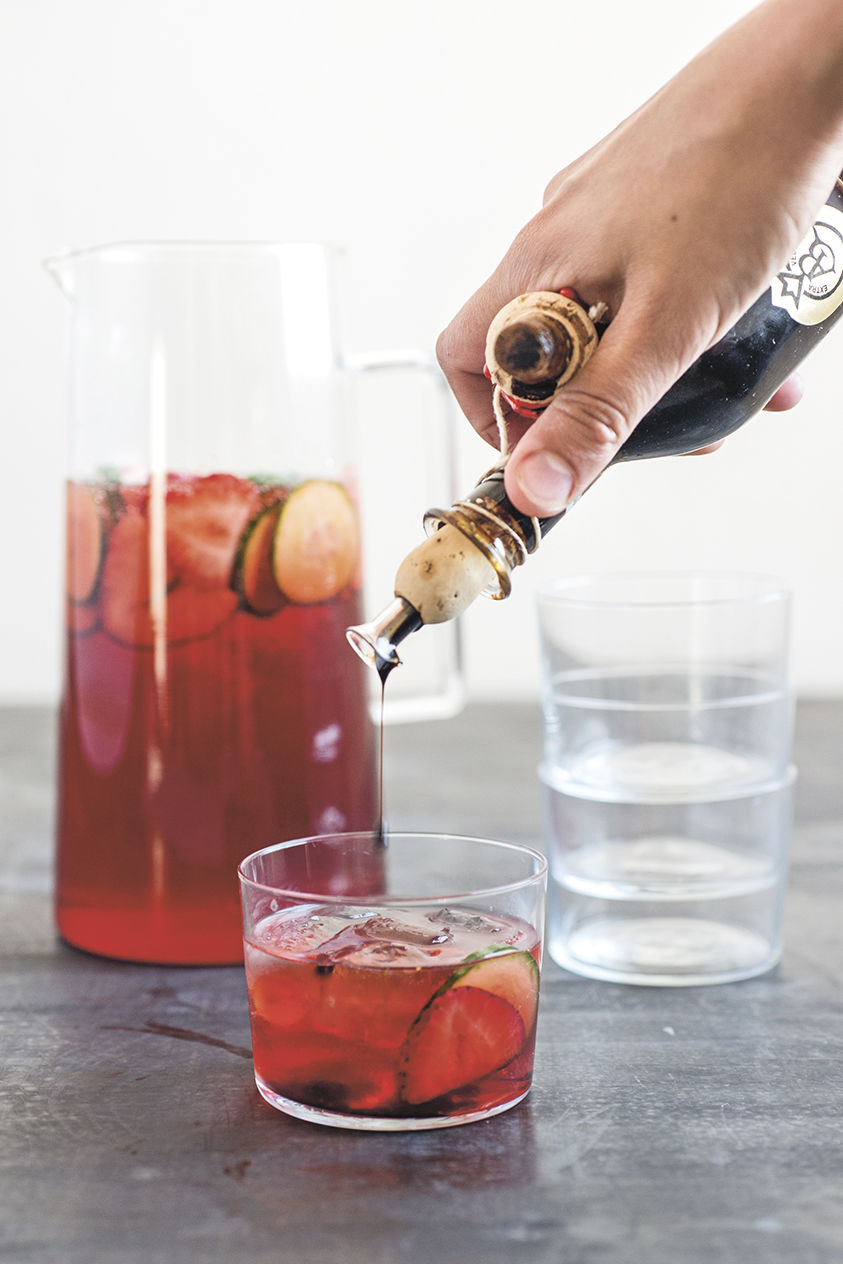 Massimo Bottura, the most famous chef in Modena, Italy, is one of the many artisanal vinegar makers described in Acid Trip; courtesy Abrams Books

A traditional aged Italian-style organic aceto balsamico is made in Monticello, CQNew Mexico, by Jane and Steve Darland. For more information, or to order online, go to organicbalsamic .com. Email jane@organicbalsamic.com if you have questions.

Acid Trip: Travels in the World of Vinegar with Recipes from Leading Chefs, Insights from Top Producers, and Step-by-Step Instructions on How to Make Your Own by Michael Harlan Turkell (Abrams, 2017), 319 pages, $29.99

Internationally renowned chef/restaurateur Daniel Boulud, in the foreword to Acid Trip: Travels in the World of Vinegar, writes, “Many people might wonder what could compel someone to become obsessed with vinegar.” His answer is simple: “For a chef, acidity is central to the concept of balance of flavor, and the world of vinegar, as Michael (Harlan Turkell) illustrates in this book, is vast and complex, more than many people, even chefs, realize.”

For Turkell, a food writer, photographer, International Association of Culinary Professionals cookbook winner, James Beard-award nominee, and podcaster who once cooked in restaurants, the obsession began when a bottle of red wine left too long on his kitchen counter spontaneously turned into a delicious vinegar. His attempts to recreate that event evolved into years of study, experimentation, travel, and his most recent book. (Turkell’s past obsessions have included beer, bread, and offal, each of which has also resulted in a book.)

Vinegar appears in the cuisine of almost every culture and is a key ingredient not only in pickling, but also in the creation of ketchup, mustard, mayonnaise, hot sauces, chutneys, vinaigrettes, and butter- and egg-yolk-based mother sauces (like beurre blanc and béarnaise). Baked goods, braises, drinking vinegars, and even cocktails also benefit from its acidic kiss, Turkell writes. But “this sour wine (from the French vin aigre) remains underappreciated and little understood.” To remedy this condition, he details years of home experiments and takes to the road to visit, taste, and document as many vinegar variations and artisanal producers as he can in France, Italy, Austria, Japan, and North America.

“This is a story about a journey,” he writes, “an ‘acid trip’ as it were, that has led me to a new appreciation for acidity and the power of fresh ingredients.” Mass-produced vinegars not only lose the unique characteristics of the wines they are made from, he says, but are also often adulterated. The largest commercial vinegar producers in this country, for example, are allowed to use synthetic ethanol (derived from wood and petroleum) in place of the double fermentation favored by small artisanal producers.

After a brief history of vinegar that ranges from its origins as a rare and valuable condiment in ancient Mesopotamia to a remedy for the bubonic plague — and an everyday drink of the poor in the Middle Ages — he takes us to Paris, where he breakfasts on a butter-fried egg topped with a reduced white wine vinegar. From Paris, he sets off for Orléans, where the “sour wine” trade can be traced back to the 14th century. Once home to more than 300 vinegar makers, only one is still actively producing vinegar in the traditional style.

This recipe, which Turkell credits to Damon Boelte of Grand Army bar and restaurant in Brooklyn, New York, riffs on two northern Italian classics: the Negroni cocktail and a dessert of ripe, aromatic strawberries doused with aged balsamico. An inexpensive, off-the-grocery-store-shelf balsamic will not deliver good results.

A simple recipe for leeks vinaigrette from the Troisgros family (whose eponymous restaurant has held three Michelin stars since 1968) that makes use of white wine vinegar is included in this section — one of more than 100 recipes from both well-known and little-known chefs, including Turkell himself. Acid Trip is, then, as much a cookbook as a travelogue and exploration of artisanal vinegar production techniques.

Recipes range from dressings and sauces to preparations for meat, poultry, and seafood to vegetables, salads, soups, snacks, drinks, and desserts. (There’s even one for a copper pot cleaner.) Some of the dishes are simple, others so complex you might wish for a brigade of cooks to help with prep. But there is something to learn about the alchemy vinegar brings to the kitchen in all of them.

From France, Turkell moves onto Italy, where he explores balsamic vinegars that have been made in Modena since 1605 and bemoans the industrial production that began in 1967. “Today,” he writes, “the Balsamico Tradizionale, which is protected by its DOP (Denominazione di Origine Protetta) status, accounts for less than 0.01 percent of the balsamic vinegar produced annually.” The stop includes a brief visit with Modena’s most famous chef, Massimo Bottura, who also produces a balsamic DOP and teaches the author to dress his salads with vinegar before adding any oils so the acidity will permeate the greens.

Turkell does not include a basic vinaigrette in his book — perhaps because recipes for the olive-oil-and-vinegar-based salad dressing abound in cookbooks and fill the internet. The classic ratio for a well-balanced vinaigrette is three parts oil to one part vinegar. But many things can affect the flavor and acidity of the final product. Is your olive oil fruity, peppery, or mild? Do you want to use a different, more neutral oil, like grapeseed? How acidic is your choice of vinegar? Has it been infused with fruits or herbs? Are you including shallots and salt in the mix? What are you using to emulsify the dressing: mustard, an egg yolk, some anchovies? Finally, how acidic do you like your dressings? My husband is hypersensitive to vinegars, so we up the ratio to 5:1, and always include shallots and mustard. Smell your vinaigrette as you whisk it together, taste it, then adjust the ratio until you find the balance that tastes best to you.

The chapter on Japan is the longest and the most focused, beginning with Turkell’s arrival in Tokyo at the beginning of Sakura Matsuri season (during which a cherry-blossom vinegar is produced “which blooms in your mouth like a spring awakening”). This section largely avoids the attention-hopping that interjects chefs, restaurants, bars, and breweries from one location to another, which marks most of the writing about other regions. The influential chef Barbara Lynch, for example, appears in Austria, as well as in Boston, home to her seven restaurants. An index would have helped track the people and places that are scattered throughout the book, but there may have been no space (and perhaps no budget) for that.

Should you get caught up in Turkell’s obsession, he concludes the book with a 12-page guide to making your own vinegar. It covers such essentials as fermentation, equipment (glass jars are best), accessories (cheesecloth, an airlock), ingredients, ideal environment, testing, clarifying, and storing. Under “Missteps,” he introduces us to vinegar eels (“these thread-thin, half-inch-long nematodes … are worms that feed off the yeast cultures that form on the surface of fermenting vinegar. To see if you have any, bring your vinegar into a dark room and shine a flashlight into it … they’ll move toward the light.”

Turkell concludes the eels are “harmless if a bit unsightly.” But I think I’d rather spend my time hunting down some of the artisanal vinegars he writes about than straining eels out of a homemade brew. ◀