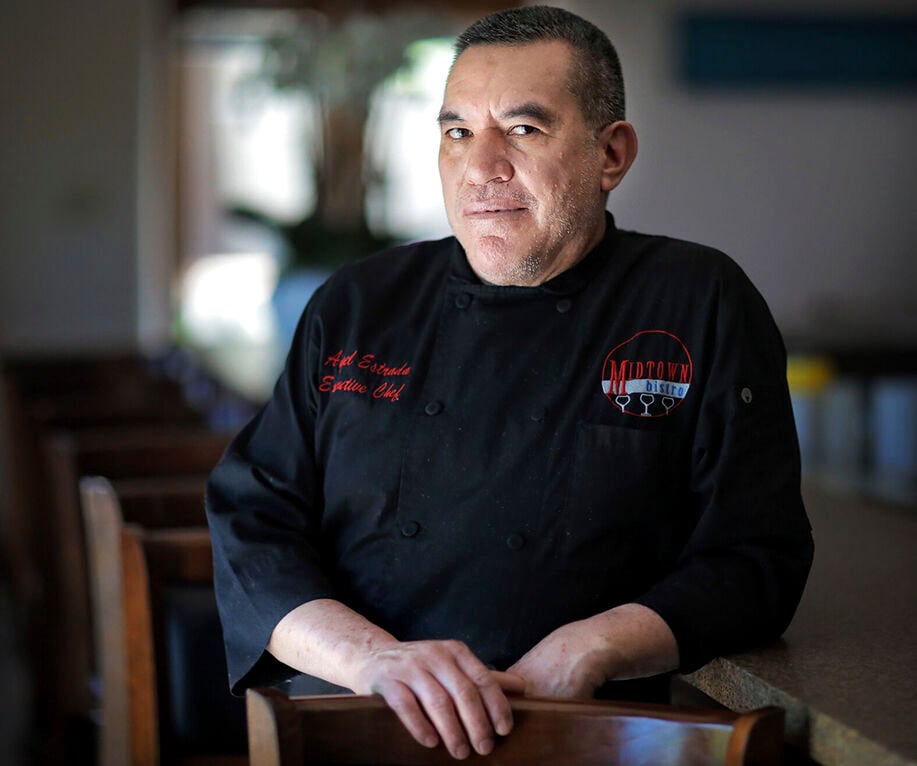 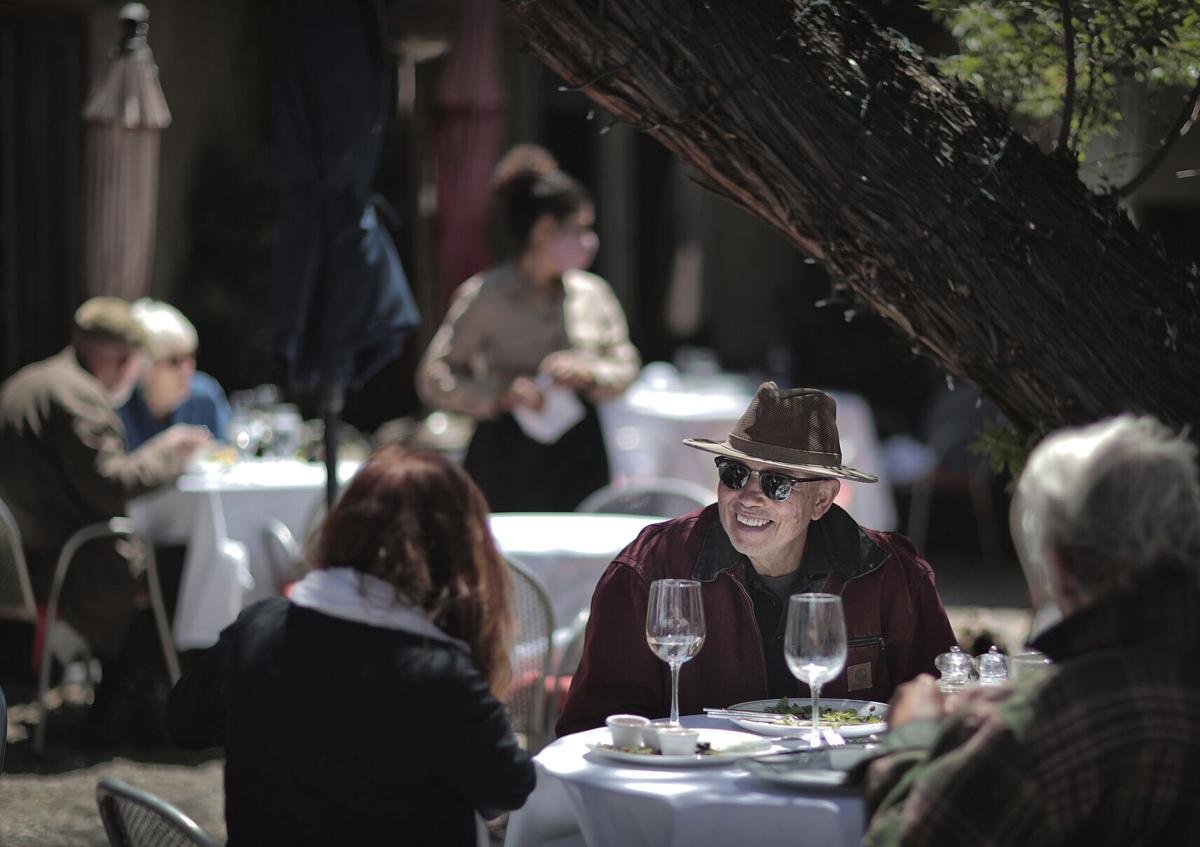 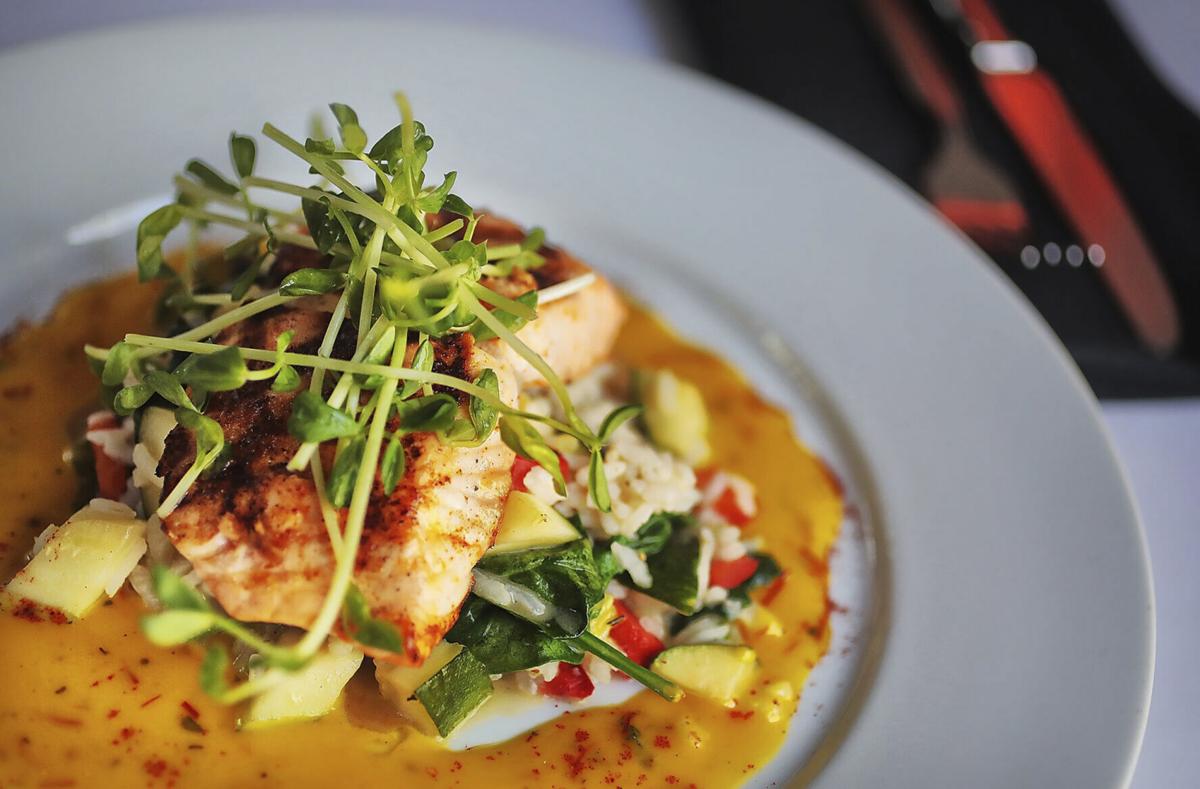 Midtown Bistro is almost hidden behind a sprawling rock garden, where Second Street turns into San Mateo Road. Located at the edge of what is sometimes called the Triangle District, the upscale restaurant is the only fine dining available in this artsy, working-class neighborhood that has been slowly gentrifying for decades. They focus on steaks, chops, and seafood with some Mexican and New Mexican influences.

Inside, the restaurant is bigger than you might expect, with seating for about 100 when they’re serving at full capacity. The décor is at once cheerful and austere. White tablecloths and red chairs are complemented by mirrored walls, which recall the location’s days as a gym. “The kitchen was the massage room,” says Executive Chef Angel Estrada, 53. After significant renovations, he and General Manager Edmund Catanach, 62, opened Midtown Bistro in December 2012. “We built the bar a few years later, after the marijuana dispensary that was there closed.”

The twinkling lights of Midtown’s large patio are far enough from downtown that the restaurant doesn’t attract too many tourists. At lunch, seats are filled by office workers from surrounding businesses, doctors and staff from CHRISTUS St. Vincent Regional Medical Center, and the retired class. They also serve Sunday brunch, but it’s at dinner when the food and service really shine, when people aren’t rushing back to work and can take time to relax, Estrada says.

“At the end of the night, I come around and talk to some of the customers. Everyone leaves happy.”

Pasatiempo talked to Estrada about his rise through the local restaurant world and Santa Fe’s changing palate.

Pasatiempo: What is your background?

Angel Estrada: I was born and raised in Chihuahua, Mexico. I come from a big family. I’m the oldest of eight. I used to help my mother [with the cooking] after I was done helping my father on the farm. He grew vegetables — garlic, onions, potato, zucchini. I came to the States when I was 16, and I’ve been living in Santa Fe all these years.

Pasa: How did you get started in the restaurant business?

A.E.: I started as a dishwasher at JB’s Restaurant, the one on St. Francis Drive, in 1984. I went from being a dishwasher to being a prep cook. After I was done with my work, I used to drop in the kitchen to help the guys. I was working for free to learn how to cook on the line. Then I moved to Celebrations on Canyon Road. I wasn’t called a chef, but I was in charge of the kitchen.

Pasa: Those are some classic haunts. Many Santa Fe foodies know you from another restaurant with plenty of local history, Santacafé.

A.E.: After about six years at Celebrations, I moved to Santacafé as a line cook. I moved up to executive sous chef and did that for about 11 years, and then became the chef. I was there for 20 years in total. Then we decided to open this place. My business partner was the GM at Santacafé. We didn’t leave to start this restaurant, but we both needed a change after being there so long, and this is how it worked out. We knew we wanted to open around here, not downtown. We have been very lucky since the very beginning. We have been building business with the locals. Right before the pandemic, we were so busy. Business is building up again since we reopened in February. People are responding.

Pasa: How do you describe your menu?

A.E.: American with a Southwestern flair. Being born and raised in Mexico, I always try to work with a little spice, chile. But not too spicy. Not everyone eats very spicy food. I try to play with that. I make all the sauces and dressings from scratch. We sell a lot of crab cakes. Almost every table orders calamari. And, right now, I’m making halibut because it’s in season. I think seafood is the most popular thing that people are eating these days.

Pasa: Why do you think that is?

A.E.: Maybe because people were recently observing Lent? But a lot of people are just eating very different these days. There are a lot of vegan people, a lot of gluten-free people, a lot of vegetarians, people who don’t eat dairy. My kids are vegetarian. Probably, to open a restaurant with just vegetarian or vegan, it might not be enough clientele for that, but I have been changing my menu, trying to accommodate for our clientele. Sometimes they show us a little card that has all their allergies on it. It’s getting hard to keep up, but we try to accommodate.

Pasa: How often do you change the menu?

A.E.: I just changed it from winter to spring, to start using whatever is available. I usually get a lot of stuff from people I know in La Cienega, Chimayó, Velarde. From the Farmers’ Market I get tomatoes, beets, potatoes, zucchini, squash blossoms. On Saturday mornings, I buy a little bit of everything, and that night, I’ll run a special with it. We get our seafood from Above Sea Level, a small company here in town. They get their stuff fresh every day. If you need five pounds of tuna, they deliver right away. I only buy what I need daily.

Pasa: Can we talk about wine pairings?

A.E.: I leave that up to the bar manager, Carmalee McGinnis. She knows everything we have.

Pasa: In that case, Carmalee, can you tell me which wine pairs best with the steak and enchiladas?

Carmalee McGinnis: One of my favorite wines is the [Ferrari-Carano] Siena. It’s a blend, a nice red, but not everybody wants red. If they want a fruitier wine, we might go with a Reisling, which go really well with spicy foods.

Pasa: What can you tell me about the Noisy Water Green Chile wine from Ruidoso? Is it spicy?

C.M.: It’s not spicy, but you can taste roasted green chile. People either like it or hate it. It pairs well with some of our appetizers. Angel does a really wonderful shrimp appetizer that has a little spice in the sauce. I would [drink] that with the enchilada as well.

Pasa: Angel, do you have any signature herbs or flavor combinations?

Pasa: Do you have a vision for food? Do you consider yourself an artist?

A.E.: I don’t consider myself a star or anything like that, because I am a chef who always liked to be in the kitchen. You will see me always in the line. I set up my own station; I work my own station. I like to play with the sauces for my meats. I have a romesco sauce that I make for seafood that’s all made from vegetables and herbs. I make my own demi-glace. You go to a steak house, and they serve you a fillet mignon with, like, sauteed mushrooms with bourbon thrown on. It doesn’t have all the flavors. When you make demi-glace, it takes a whole day to roast the bones, another two or three days to reduce it until it turns into a gelatin. You can eat a piece of ribeye — and it’s the best meat in the world — but if you add a nice sauce to it, it’s even way better. ◀