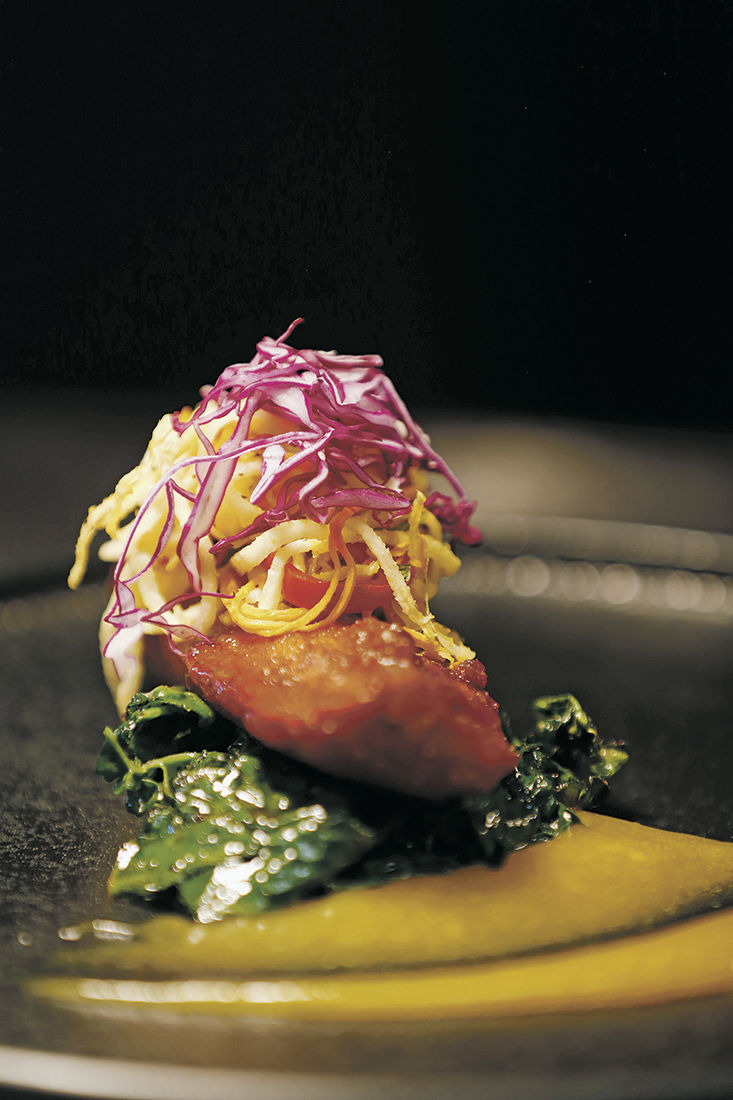 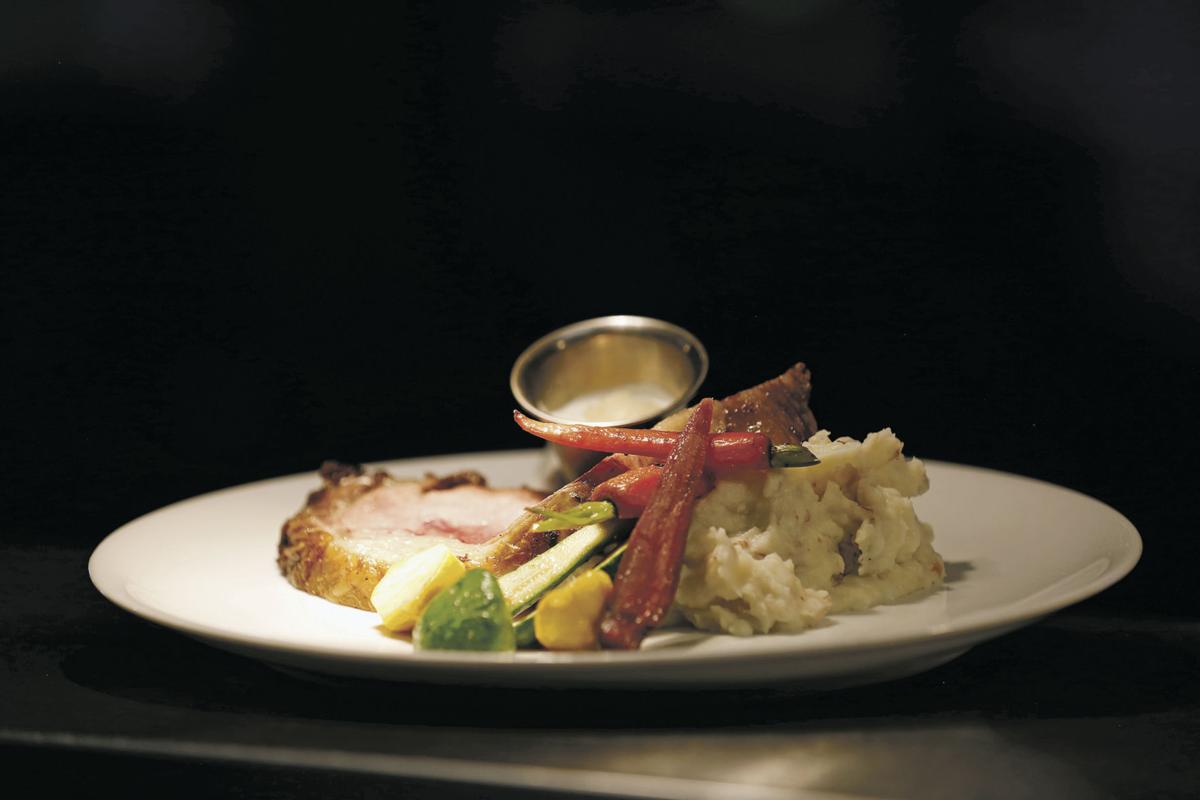 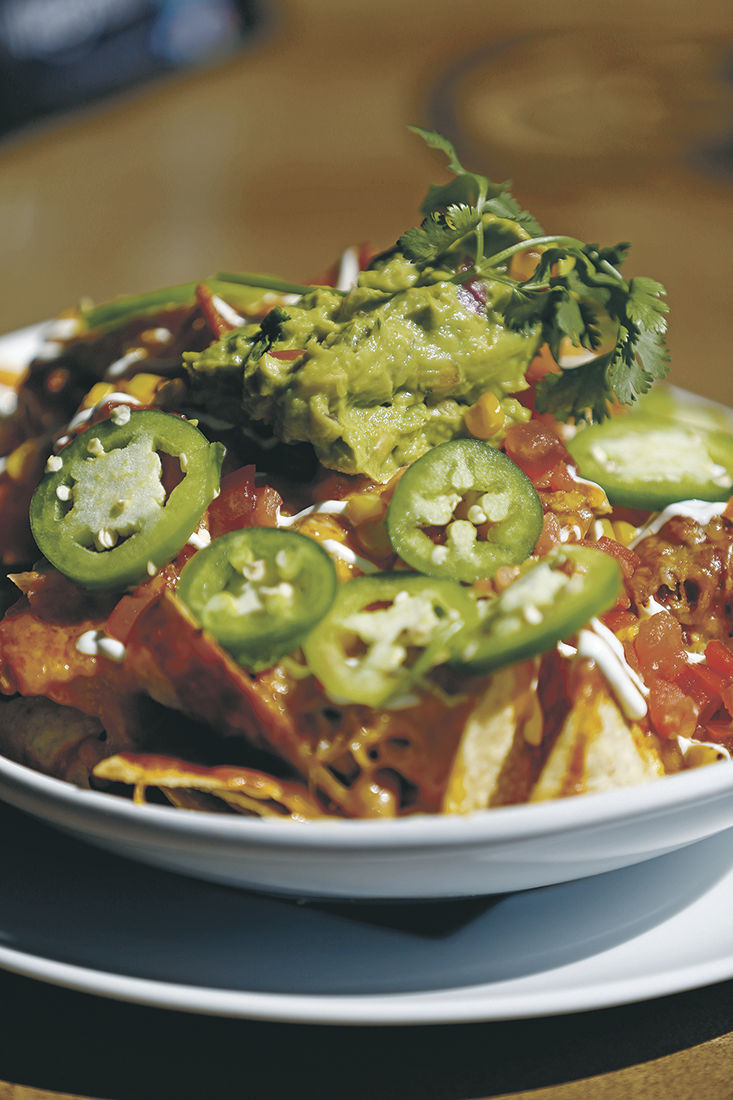 Many summers ago, I tagged along on a weekend trip to Las Vegas, Nevada, with some friends who were serious habitual gamblers. We stayed at the Stardust Resort and Casino, which had not yet been imploded and razed, and while I clearly recall a friend winning $25,000 during one very long night of baccarat, I have utterly forgotten any specifics about the food we ate.

The primary aim of many casino restaurants is to put food in your belly while keeping gambling money in your pocket. At the Stardust, they were designed in keeping with most casinos as a whole — cavernous interior spaces illuminated only in a lurid artificial way, with a near-complete lack of windows, allowing you to blissfully lose track of time. Does 3 on the clock represent a.m. or p.m.?

You’d be forgiven for expecting something similar at the new Tesuque Casino, but to some extent, you’d be wrong. The vast, mostly open gambling floor has impressively lofty ceilings with dramatic treatments, and one end of the building is composed of a wall of glass, offering a seriously stunning outlook on the Sangre de Cristos. Actually, the building as a whole features a number of windows, so unless you’re really captivated by your Quackpot slot machine, you’ll be aware of when the sun has sunk below the horizon.

You might also predict forgettable food at the casino’s restaurant, Cottonwood Kitchen, but yet again, you’d be mistaken. The prime similarity Cottonwood bears to other casino restaurants is its discounts and specials. The killer Lounge Social Hour (aka happy hour) — held daily from 4 to 6 p.m. and from 11 p.m. to close on Thursdays, Fridays, and Saturdays — translates to half-price drinks, appetizers, and burgers. Wines by the bottle are half price on Wednesdays. And in the ballroom on Friday from 5 to 9 p.m., the casino hosts an all-you-can-eat seafood buffet ($24.95) that features the likes of crab legs and freshly fried shrimp. Sign up for the casino’s Player’s Club and visit one of the strategically placed computer kiosks to check for other dining specials and rewards. My blackjack-loving dining companion (before he headed off to a table) availed himself of the $16 prime rib, an oversized slab of tender, savory beef plated with timeless mashed-potato-and-veg accompaniments. Note that the goal of keeping you within the casino walls remains paramount: per the menu, “Cottonwood Kitchen does not package its food for takeout.”

The guac and salsa platter ($13) is a sizeable snack, and its presentation is prettier than many of its basket-y cousins elsewhere, with pico de gallo, tomatillo-corn salsa, and guac, each given a distinct section of a ceramic dish, and chips provided almost in excess. Nachos ($14) here fall into the “too much stuff, not enough chips” camp, with a heavy, belly-filling sea of beans, red chile sauce, cheese, guac, corn kernels, diced tomato, jalapeño, crema, and pulled chicken that practically drowns them. That’s not necessarily a bad thing, as more chips can always be had (particularly if someone else at your table has ordered guac and salsa), and you definitely get your money’s worth, especially during happy hour. The appetizer discount also makes the shrimp cocktail more appealing. Although they are indeed jumbo, $16 still seems a bit spendy for three chilled crustaceans ringing a dish of disappointingly demure cocktail sauce (though you can ask for extra horseradish to zhush it up).

Aptly named, the Meat Candy ($12) is a beautiful, colorful plating of spiced honey-glazed pork belly, a mildly fruity roasted-peach puree, and refreshingly crisp jicama slaw for gently bracing acidic contrast. The zingy Buffalo chicken tenders ($15) are boneless versions of the traditional bar wings; the crust is impressively crisp despite a generous dousing of spicy sauce. Dotted with chopped scallions and crumbled blue cheese, the tenders are served with a clever pseudo-tamale of jalapeño grits that’s garnished with toasted-corn relish.

The Caesar salad ($9) breaks even, complete with standard-issue dressing, waxy Parmesan ribbons, and red-chile-dusted croutons that looked more exciting than they tasted. The kitchen does toss in some kale leaves to up the ante on greenery and nutrition. Presumably, the Adult Mac and Cheese ($11) receives the “adult” moniker due to the inclusion of cheeses like fontina and Gouda. Though the cavatappi was ideally cooked and the dish unquestionably rich, I found it bland overall (notwithstanding the addition of green chile for a $2 upcharge), with a thin and milky sauce that collected in the bottom of the cast-iron au gratin dish. More compelling were the perfectly golden fries I kept stealing from my companion’s plate, where they were languishing after he’d downed the wildly satisfying French dip ($15): Thin, tender slices of prime rib and a blessedly modest dose of Swiss cheese  sandwiched in a baguette, with a generous side of savory jus for dunking.

Some dishes are kind of a bust. Creatively served as though they’re tumbling out of a small fry basket, the calamari ($13) are crispy indeed but bland and a bit rubbery — though the addition of fried cherry peppers to the mix was a zesty delight. The artichoke dip ($14) was rich but, in spite of its walnut-olive tapenade component, otherwise nondescript and skippable.

The staff, though, are cheerful and friendly, and they know the menu well. Otherwise, they’re mostly invisible, and I mean that in the best way — not chatty, not pushy, just professional.

The restaurant’s bar adjoins the floor in an open flow: There’s only a low metal-and-glass wall between the two, presumably to indicate the strict demarcation between places where alcohol is allowed and where it’s not. It has a modern feel of a hotel resort bar, with metallic-accented wallpaper and an eye-catching light fixture that resembles tube-like stalactites glowing in rotating hues. The lounge has a lower light and darker tones that bring to mind late-night snifters of cognac and cigars. On some evenings, as a warmup to a more raucous act, a solo musician might deliver covers ranging from Cat Stevens and Sam Cooke to Third Eye Blind. On the other side of a wall of banquette seating, the main dining room has a generic, vaguely cafeteria-like ambiance, unless you choose one of the booths accented by wallpaper in a striking malachite pattern. The room’s western wall is composed almost entirely of glass, flooding the space with light during the day and offering views of the Jemez Mountains, the badlands, and sunsets. An expansive open patio is just outside the door, and while seating wasn’t available there on either of our two recent visits, it has what must be one of the most spectacular views in town. I’m not typically the gambling kind, but that I’d be willing to bet on. ◀