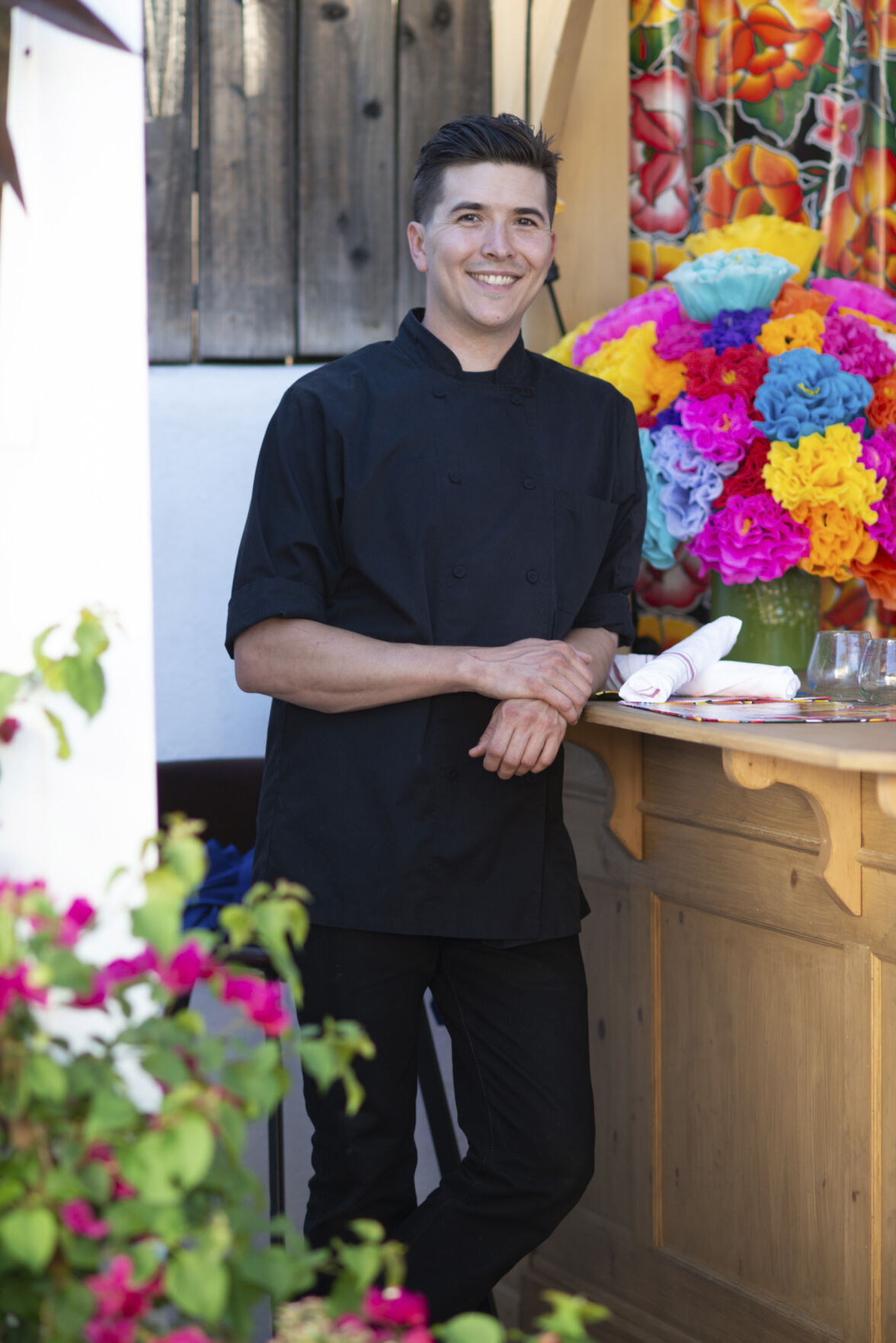 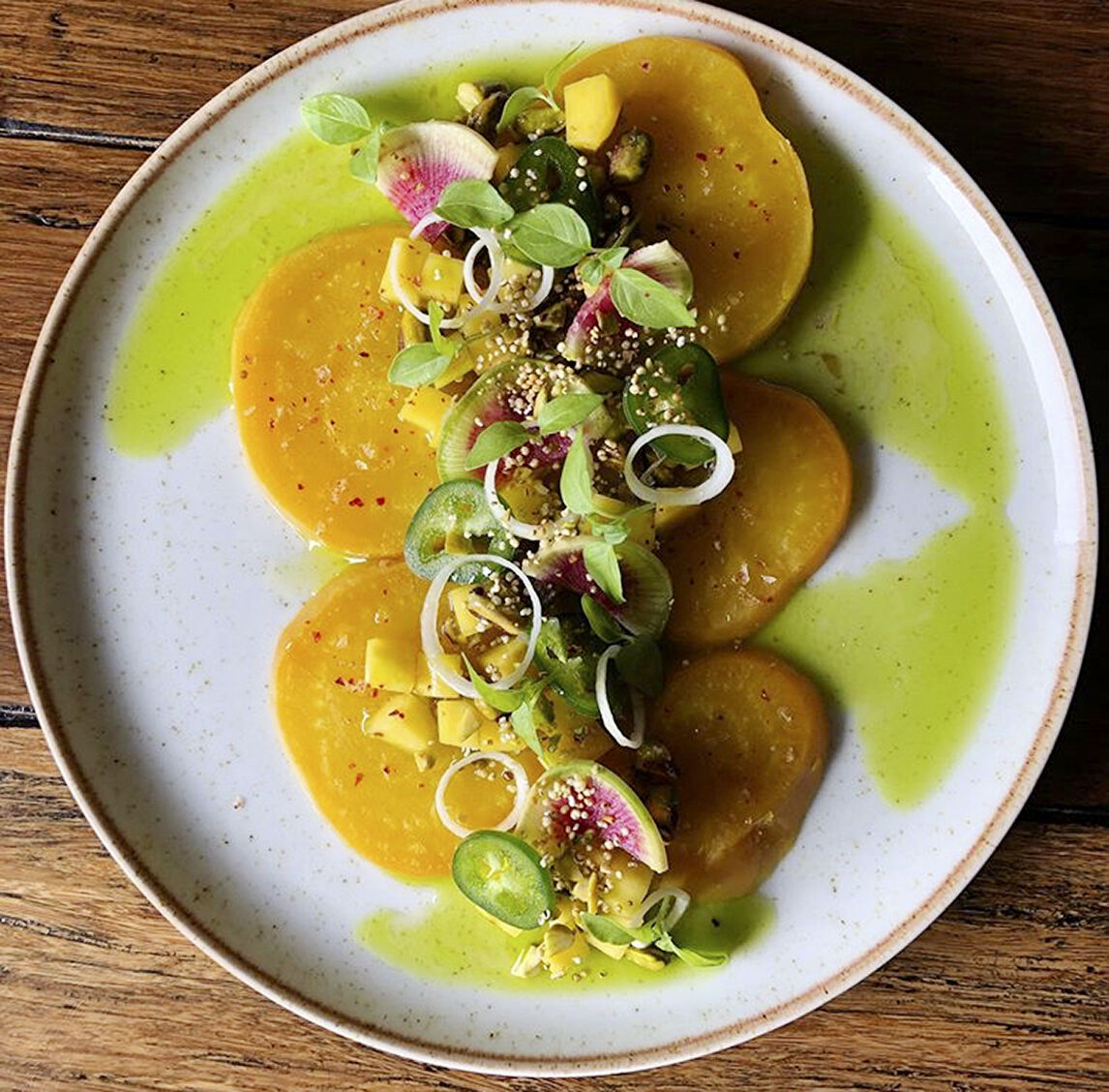 The beet mango at Paloma

The beet mango at Paloma

As far as Nathan Mayes knows, Paloma is the only restaurant in Santa Fe that serves fresh, blue corn tortillas made in-house with heirloom corn grown in New Mexico. He soaks dried corn overnight in calcium hydroxide — “essentially, ground limestone” — before grinding it into masa. Corn is foundational to the menu, says Mayes, chef and partner of Paloma, which opened in 2017 on Guadalupe Street. His cuisine is anchored in traditional Mexican cooking and elevated by fresh, local ingredients and unusual flavor combinations, like cauliflower tacos with golden raisins, Spanish olives, and sweet pepper-almond salsa.

Mayes, 33, spoke to Pasatiempo about what makes Paloma different than other Mexican restaurants, pushing the culinary envelope, and the important of corn to the menu. Right now they’re offering a seasonal menu that includes specials made with local melon and house-pickled peppers, as well as popular Paloma staples like fajitas and squash blossom enchiladas. Whether you order a familiar favorite or something more daring, “fresh,” he says, is the watchword.

“Summer fits our food really well here,” he says. “Summertime is when we shine.”

Pasatiempo: At Paloma, you can stuff yourself with chicken with mole and all the fixings or create your own array — say, bone broth soup and a bowl of potatoes, or a cocktail and a single sea bass taco. Are people confused by this? How do people typically deal with the menu?

Nathan Mayes: I kind of have strange food preferences. At brunch, I order a bunch of sides. I want a little bit of toast, a little bit of fruit, a little bit of bacon. I think it’s more fun to eat that way. I also like sharing food and passing it around between people. I want Paloma to be a place you could come a few nights a week if you want to and not have to spend on a full entrée to have a good time. We try to keep the price point to where you can do that. You could have a few sides and a cocktail and be out the door for $20.

Pasa: How do you categorize Paloma? It’s more upscale than a gastropub, but it’s not exactly fine dining. It’s healthy, but it’s not health food. It also has a lot of traditional Mexican and New Mexican influences.

Mayes: It’s hard to categorize. When we first opened, we told people we were going to be a Mexican restaurant and people said there were already plenty of Mexican restaurants here. Marja [Martin, the owner] and I had a vision of what we wanted to do, which was fresh food [made] in a creative but unpretentious way. We don’t get too far away from being a place where you know there are familiar things you can get there. Our location near the Farmers’ Market, and our relationships with farmers, lets us play and be creative. We still have some safer options for people.

Pasa: What do you mean by safer?

Mayes: Like our fajitas. A lot of the people in the kitchen call it a curse, but I can’t take them off the menu because we sell so much of it. All the cooks get tired of cooking the same stuff. I have a very hungry staff that enjoys cooking and pushing and playing. We try to find a balance of both of those things.

Pasa: What sorts of dishes push the envelope?

Mayes: We’ve done some bison tartar. We’ve done some fermented foods. We have a beet and mango salad that we bring back every spring. Certain things that might not be traditionally Mexican but play well with the environment, with the ingredients.

Pasa: Where else on the menu does corn appear, other than in your tortillas?

Mayes: We always have the New Mexican dried corn that we use for our tortillas. In the winter, you can buy [fresh] corncobs at the store — but they’re not good. Not only are they not good, but they’re expensive and really starchy. They go bad fast. We wind up having to take sweet corn off the menu for a few months of the year. We might keep a limited amount for a garnish. But during the summer, we work it into our dishes, our salads.

Pasa: Where do you source your meat and produce?

Mayes: We want to use as much local product as possible. In terms of meat, we use a lot of different local purveyors — Lotus Farms’ chicken, in Tijeras. Native beef from Northwestern New Mexico, Arizona, and Colorado — pasture-raised, smaller farms, humanely sourced. We work with La Montañita Co-op’s distribution center for a lot of our product. Our lamb comes from a few different farms, including Talus Wind Ranch up in Galisteo. There are some other farms around the state that the co-op puts us into contact with, and there are a few I work with directly. We work with Freshies out of Velarde. They sell peaches and mushrooms, amongst other things. They called me in the middle of the quarantine and said they had mushrooms, and I hadn’t even realized it was spring.

Pasa: Paloma’s bar features a large assortment of tequilas, and your specialty cocktail selection veers toward the spicy side. Why did you go in that direction?

Mayes: Agave is really kind of central to Mexican cuisine, and it just fits with the food profile, fits being in the desert in the Southwest. And I think [Marja and I] just both really like to drink it. Not every [cocktail] we put out is a hit. We try stuff with food and with beverage. We both just really enjoy what we do and have cultivated a team that enjoys it as well. When we’re here, obviously professionalism is number one, but we like to play and have fun. And we just like food and drink. ◀