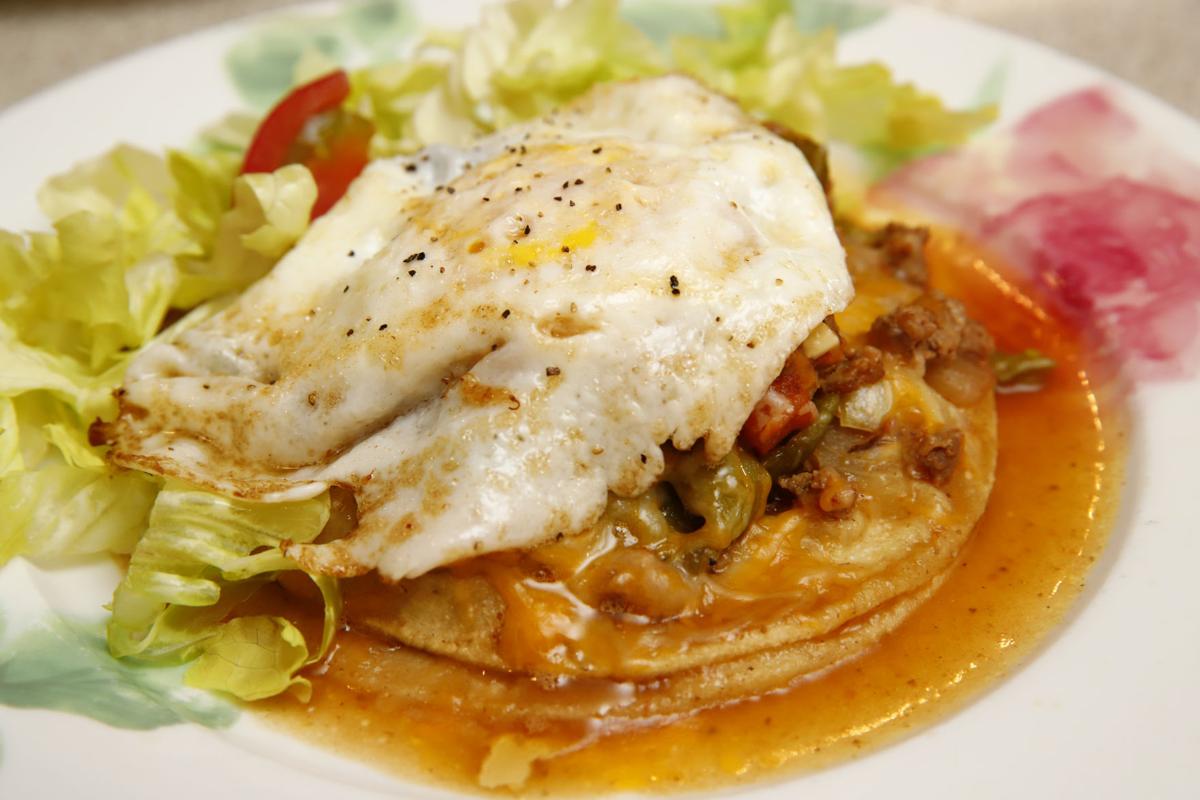 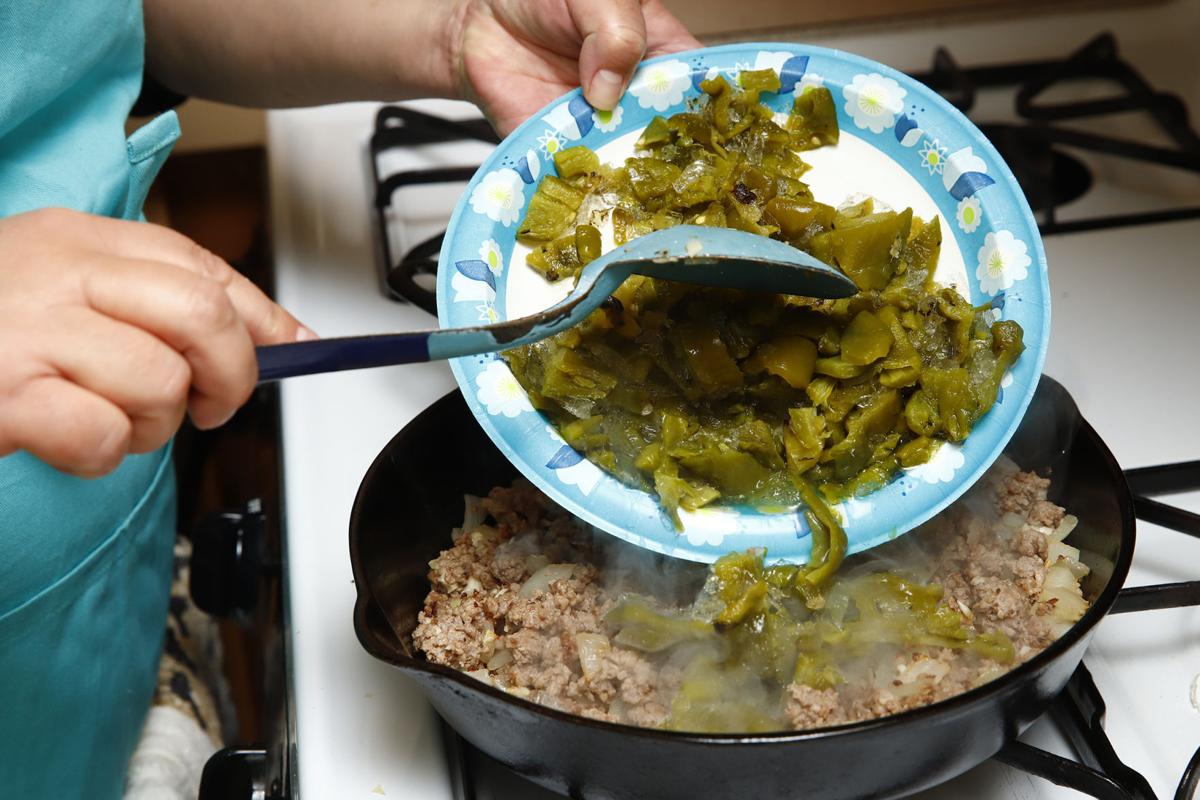 Food is a powerful kind of transporter, writes cookbook author and food writer Liddie Martinez in the introduction to her new book, The Chile Line: Historic Northern New Mexican Recipes (published by Pajarito Press). “Its preparation, aromas, distinctive sounds, and the sharing of a creative talent in a nourishing medium will also imprint our brains so much that, for instance, when I smell bacon, I am immediately in my grandmother’s kitchen,” she says of the smokey allure of her grandmother’s preparation of bacon, eggs, and green chile for her grandfather. “These aromas and sound of my early life created the atmosphere that became my lifestyle goal, the standard by which my life has been structured.”

Martinez started writing in 2018 as a monthly food columnist at the Los Alamos Daily Post. Publisher and editor Carol A. Clark offered her the job after seeing the recipes (and the following) that Martinez had posted on Facebook for her son, who was in faraway Oklahoma. The book grew out of that.

Liddie Martinez wants you to know everything about where she lives and The Chile Line cookbook, named for the Chile Line (or Santa Fe Line), the north-south narrow gauge railroad that ran beside her farm north of Española. (Running from the mid-1880s to 1941, the Santa Fe Branch line transported a lot of things, including livestock, wool, beans, and chile. Still, the line got its nickname from the view “afforded its engineers and passengers of the beautiful chile ristras hanging from rooftops and resting on the adobe walls of our houses as they dried in the hot sun.”) Packed into its 208 spiral-bound pages are simple recipes for food that grandmothers have been cooking for their families since long before the arrival of the Spanish in the 1500s; dishes they made in times of deprivation and bounty in Northern New Mexico. Martinez recounts her connection to her family, which has roots in Northern New Mexico since the 1500s, and the land through her recipes — from the simplest cornmeal mush to the treasured recipes that traveled north hundreds of years ago with colonists. Through working with the Camino Real de la Tierra Adentro project in both Mexico and Spain, Martinez — who is of Native American, Sephardic, Mexican, and Spanish lineage — grew to understand the historical details of a diverse culture that came together to create a cuisine as distinct as any in the world. At the same time, she feels a deep personal connection to her farm near the river, where the Native crops of chiles, corn, tomatoes, and squash grow. There she cooks from the memories of the past and impulses of her heart. At a time when we’re inundated with the latest cooking trends and young star chefs, The Chile Line stands in stark contrast, with simple stories of home, family, and the food that has sustained them.

“Liddie and her family ran the family farm and kept vibrant traditions and culture alive, setting an example for future generations through daily practice,” writes Gov. Michelle Lujan Grisham in the book. “This ancient tradition is alive and indeed still thriving — as it will be, I am sure, thanks to the efforts of people like Liddie, for centuries more into the future.”

Martinez’s passionate voice fills her cookbook, which is full of what she calls Insights, as well as recipes. In her preamble to her bizcochito recipe, for instance, she writes about the history of the cookie and, more personally, of the ease of baking them with her grandmother.

“We had a rhythm that I never recognized until my own son left for college and returned home one day to find me baking, and did exactly what I just described: stepped in my system and, without a word or thought, assumed the role of sous chef — a role I had played most of my life for my grandmother.”

And she implores you to make bizcochitos with traditional ingredients. In fact, she says, “If you aren’t going to use lard, don’t make them. Trust me.” If you enter Liddie’s world, you will begin to trust her authority, for when it comes to Northern New Mexican cooking, she is an expert.

While the cookbook features typical fare like enchiladas and tacos, there are also recipes that will be unfamiliar to people who didn’t grow up in the Española Valley. I didn’t know about calabacitas con carne y maiz (summer squash with ground beef and yellow corn kernels), which, Martinez says, is eaten all over Española. Another dish rare outside the Pueblo-Hispano home kitchen is chaquewe, a cornmeal mush of Native American origin that may be seasoned with juniper ash. This dish most certainly dates to long before the Conquistadors’ presence here, a time when dried corn was ground with a mano and metate and then cooked over an open fire. Martinez remembers her mother eating it with a side of red chile, and recalls it being served regularly during Semana Santa (Holy Week) when people weren’t eating meat. At that time, it was paired with vegetarian red chile or sprinkled with sugar or honey for children.

A food that harks back to hunter-gatherers and that every Española family knows is quelites with red chile seeds. Traditionally, an uncultivated edible green that grows freely along roadsides and in wastelands (as well as thriving better than planted crops in gardens), it is harvested throughout the summer, lightly cooked, and sprinkled with dried chile seeds or served with beans. Martinez’s recipe uses baby spinach, which is a perfect replacement for the wild greens our ancestors used to gather.

Martinez’s own inventions use a combination of familiar ingredients, straightforward technique, and her intuition. She created a green adovada with some coarse dried green chile caribe she found in the back of her pantry. And when Martinez made a YouTube video to promote her book, she used canned tomatoes and a box of broth to make her green chile stew.

The reality of Northern New Mexico is that the weather allows us to enjoy fresh ripe tomatoes only a few months a year. When they are not in season, everyone uses canned or resorts to hard green tasteless ones from the grocery. We sometimes make a station of the cross over how our predecessors did things in the good old days when everything was natural, but they did with what they had, and they didn’t have tomatoes in the winter unless they were dried, home canned, or tinned. An outstanding feature of Martinez’s book is that the recipes are practical; they’re made for convenience and real-world cooks.

Martinez says that when she wrote the book, she tried to use ingredients that are common to all families in the Española Valley, “things we always have on hand, regardless of income level. The book was meant to be used by everyone.” ◀

Cut pork into large cubes and place in enameled Dutch oven. Season with salt and pepper and sprinkle half the green chile Caribe, covering pork on all sides. Set aside.

In a cast iron skillet, place tomatoes, garlic, and onions, drizzled with olive oil, season with salt and pepper and roast for 25 minutes. While the aromatics are roasting, pour two cups of chicken stock into blender, and add the partially thawed green chiles to it and puree. Add the aromatics to the mixture in the blender when they are finished roasting and puree until smooth. Gently pour over the pork, sprinkle remaining chile Caribe over the top, cover tightly with lid and refrigerate for at least 24 hours.

Allow pot to come to room temperature (about an hour) before cooking. Preheat oven to 325 degrees Fahrenheit. Gently add the two remaining cups of chicken stock to the pot (don’t stir or disturb contents). Cover and braise in oven for about 3 hours or until pork pulls apart with a fork. Stir, and serve with warm tortillas.

Liddie Martinez cooks and presents her book for sale, $22.00 plus tax.