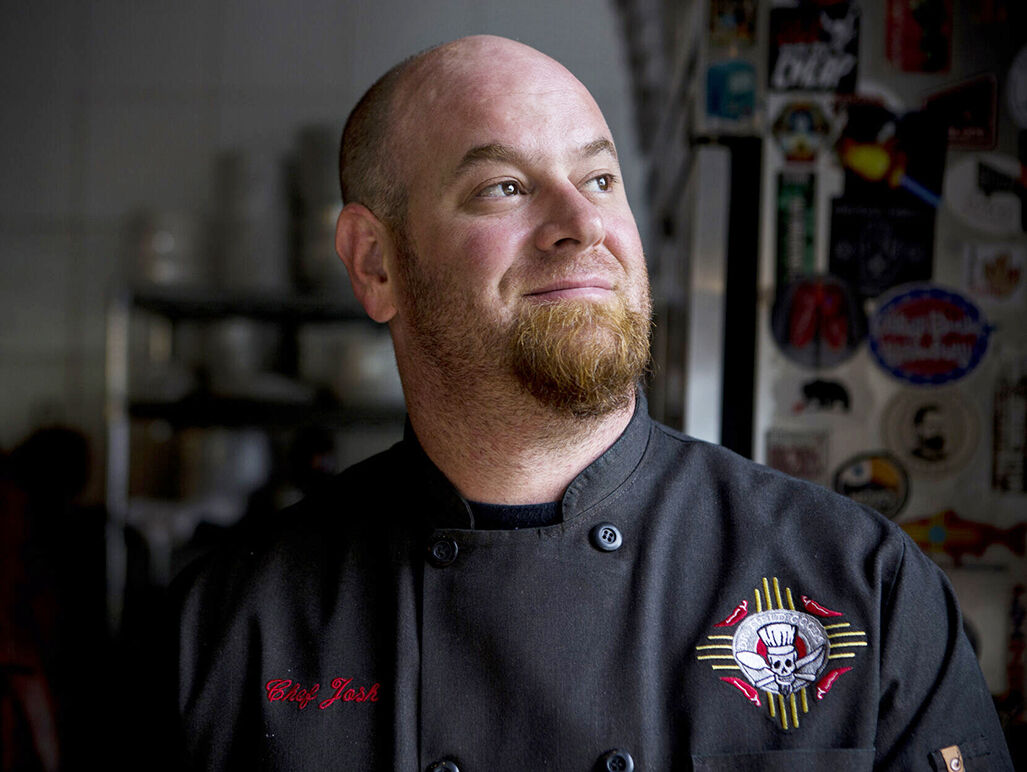 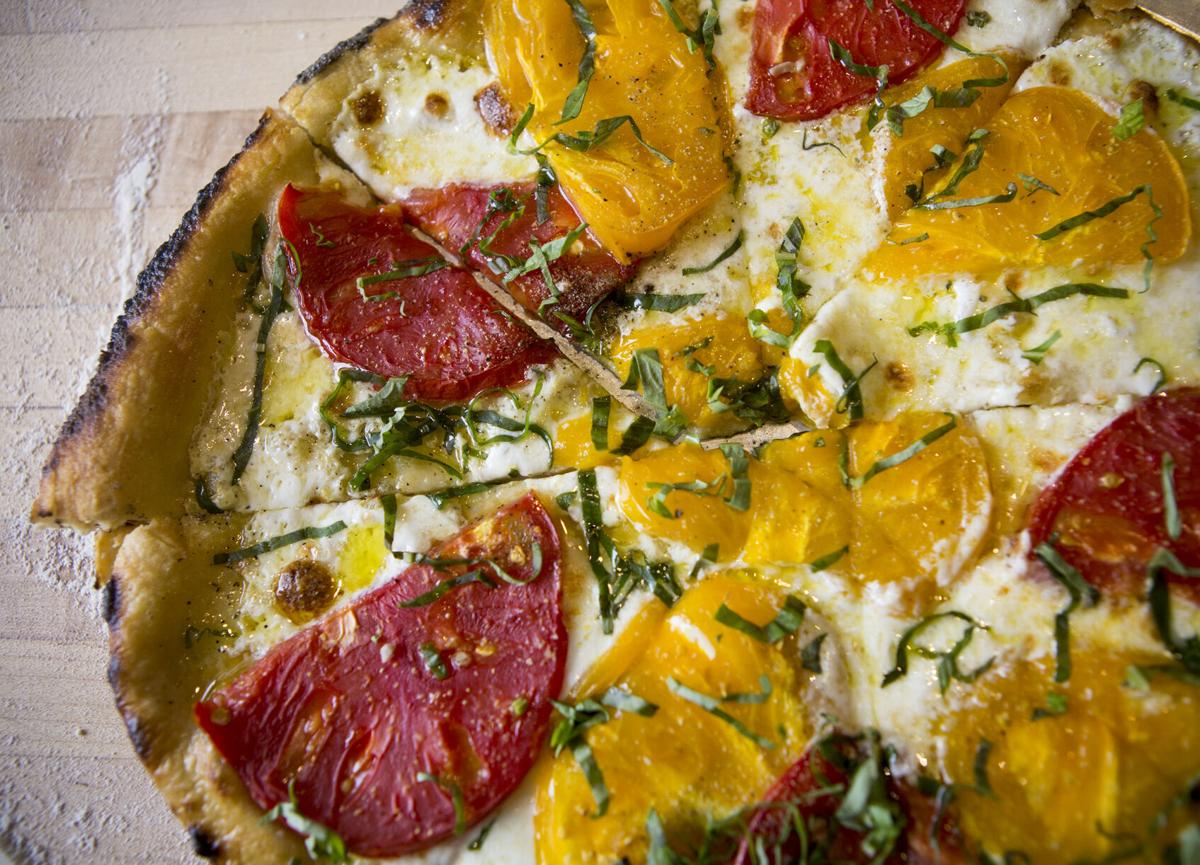 New Mexican gremolata hits your nose as soon as you enter Dr. Field Goods Kitchen. The Italian garnish is traditionally made with parsley, lemon zest, and poached garlic. For a local twist, Chef and Owner Josh Gerwin swaps the parsley for cilantro and the lemon zest for lime. The garlic, of course, is plentiful and unchanged.

“I say it’s a garnish, but it’s much more than a garnish,” Gerwin says. “It goes in the patatas bravas. It goes on the Pizza de Gallo, and in the fresh herb mix I keep.”

Gerwin, 41, is a classically French-trained chef and Santa Fe High School grad who opened Dr. Field Goods Kitchen in a Cerrillos Road strip mall in 2013, followed in 2015 by Dr. Field Goods Butcher Shop and Bakery just a few doors down, after running a food truck for several years. Former classmates — and others who remember Gerwin from his Demon football days — regularly show up in his unassuming dining room, ready to indulge in Gerwin’s flavor-forward, farm-to-table cooking. But this hometown boy has a national reputation: The Food Network’s Guy Fieri, host of Diners, Drive-ins and Dives, stopped by in 2019 to taste the indelicately named Bad Ass BLT — a nine-ounce ground bacon patty served with locally grown heirloom tomatoes on freshly baked bread.

Pasatiempo chatted with Gerwin about some of his best-selling dishes and why he thinks New Mexican comfort food pairs so well with other world cuisines.

Pasatiempo: Your menu features some unlikely fusions, such as New Mexican and Asian flavors in one dish. How did you come up with this twist?

Josh Gerwin: I don’t want to say that Asian food and New Mexican food are the same, but in New Mexican food, you have chile and amazing flavors and spice, and Asian food is chilies and spice and cilantro and lime. The flavors meld well. My carne adovada egg rolls and peanut dipping sauce, for example. I was thinking about pork pad Thai when I made that.

Gerwin: I mix the carne adovada with cabbage before I roll it in the egg roll, which helps lighten it up a bit. When people first hear me say it, they think I’m crazy. But you take that rich red chile carne adovada and dip it into the spicy, salty peanuts? They love each other.

Pasa: You make pizzas in a wood-fired oven. For those whose idea of pizza is a drippy slice eaten while walking down a city street, what makes yours different?

Gerwin: Hand-tossed dough, hand-pulled mozzarella, all fresh ingredients. I get local heirloom tomatoes from Growing Opportunities [in Alcalde]. Homemade marinara, homemade sausages. The dough has a nice chew to it, and it’s crispy with that wood-fired smokiness. One thing that sets my dough apart is fresh yeast. Dry active yeast is just there to be yeast, whereas fresh, live yeast offers that flavor as well as the rise.

Pasa: What are some of your other big sellers?

Gerwin: People love the El Cubano and the home-style enchiladas. Shrimp tacos are a huge hit. My New Mexican pulled pork sandwich — that’s my twist on barbecue. And my Bad-Ass BLT. It was featured on Diners, Drive-Ins and Dives, actually.

Pasa: What was it like to have Guy Fieri and the Food Network crew in your restaurant?

Gerwin: I only spent time with Guy on-camera. I was closed for three days, which is one of their requirements. One of the days, I was in the restaurant alone with the film crew doing still shots and going through everything very slowly. All the close-ups are done without Guy Fieri. The day that Guy was there, we had to move, move, move. It was interesting to see that side of how the show is filmed. It’s about 60 hours of filming for the 8-minute spot. My wife and daughter were here during filming, and they were hanging out with Guy in-between shots. They said he was really nice.

Pasa: You operate a butcher shop near the restaurant. What led you to expand?

Gerwin: We’d started building a commissary kitchen that originally wasn’t going to be open to the public. But one night, I was sitting in my office thinking that if I take 10 feet out of this kitchen, I can have a counter and sales. During the shutdown [for the pandemic], a lot of people found it who didn’t know about it before. My business almost doubled for a while. When you couldn’t get meat at the grocery store, we had locally sourced meat. I never ran out of flour or yeast.

Pasa: Where does your meat come from?

Gerwin: All the meat is procured through Kaiser Farms. All the hogs, beef, goat, and lamb go a slaughterhouse in Moriarty, and I pick them up from the slaughterhouse.

Pasa: Everything at Dr. Field Goods Kitchen is homemade, down to the sodas. How did that come about?

Gerwin: I didn’t want to carry Coke or Pepsi products, so I decided to make my own. You put orange juice with some simple syrup and soda water, and you’ve got an orange soda. If you add a little bit of cream, you have an orange creamsicle. We do a cucumber mint water, a fresh ginger ale. You can have a cherry limeade, a cherry creamsicle. We also have a great beer and wine list.

Pasa: Do you gravitate to comfort food or the specific styles of food you cook?

Gerwin: Some of the items on the menu wouldn’t be my first choice, and some would be my go-tos. But creating a menu isn’t really about what I like. It’s about what my customers want.

Pasa: You’re thriving in spite of the shutdown, which speaks to a loyal customer base. What’s your secret to survival in Santa Fe?

Gerwin: My goal was always to make amazing food. Like my homemade curry mussels that I steam in the wood-fired oven, then put the gremolata on top of them and bring it to the table. And you can smell the curry and the gremolata [as you’re] walking through the restaurant, and then you put it in front of them and you see their face when they take that breath, and they get that smile. That’s what it’s about. ◀

All the food from Dr feel good has been amazing,our Conavirus discovery,Just keep on Trucking. You are a winner John Morris