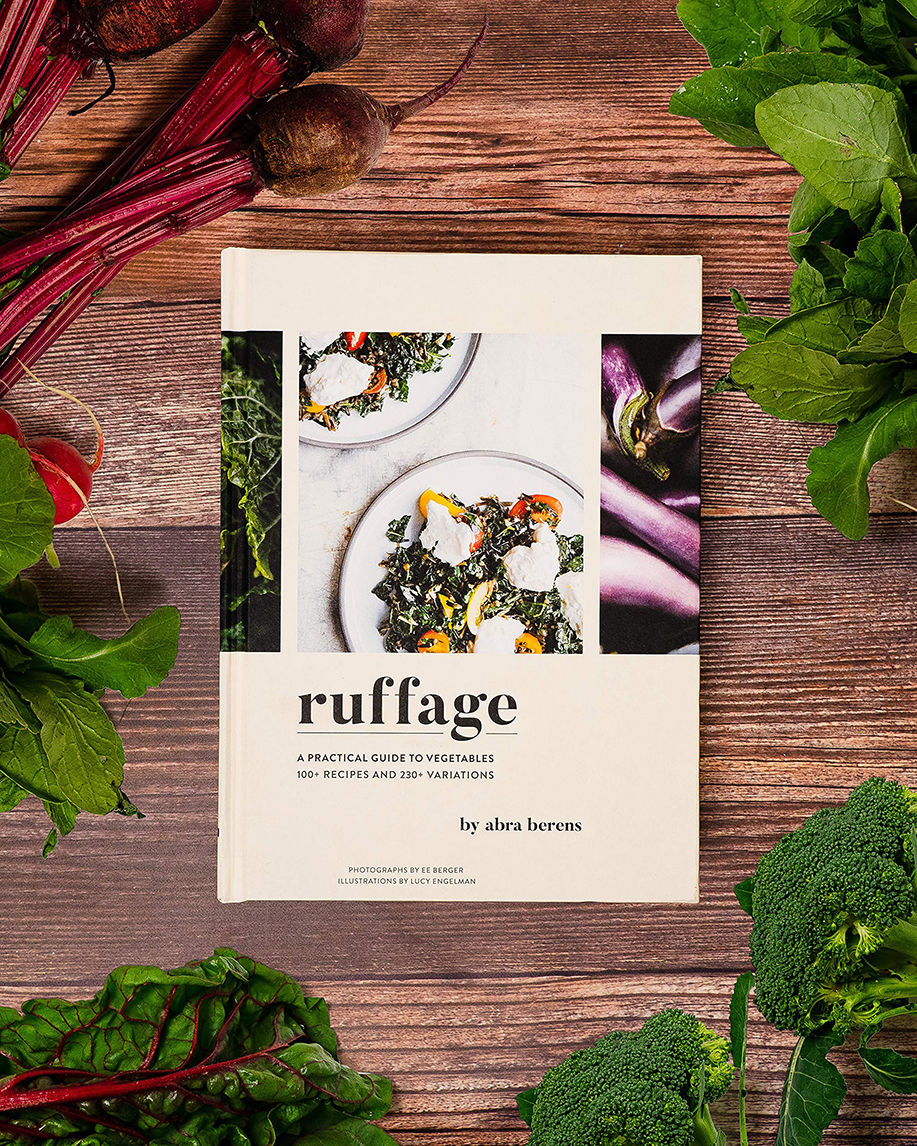 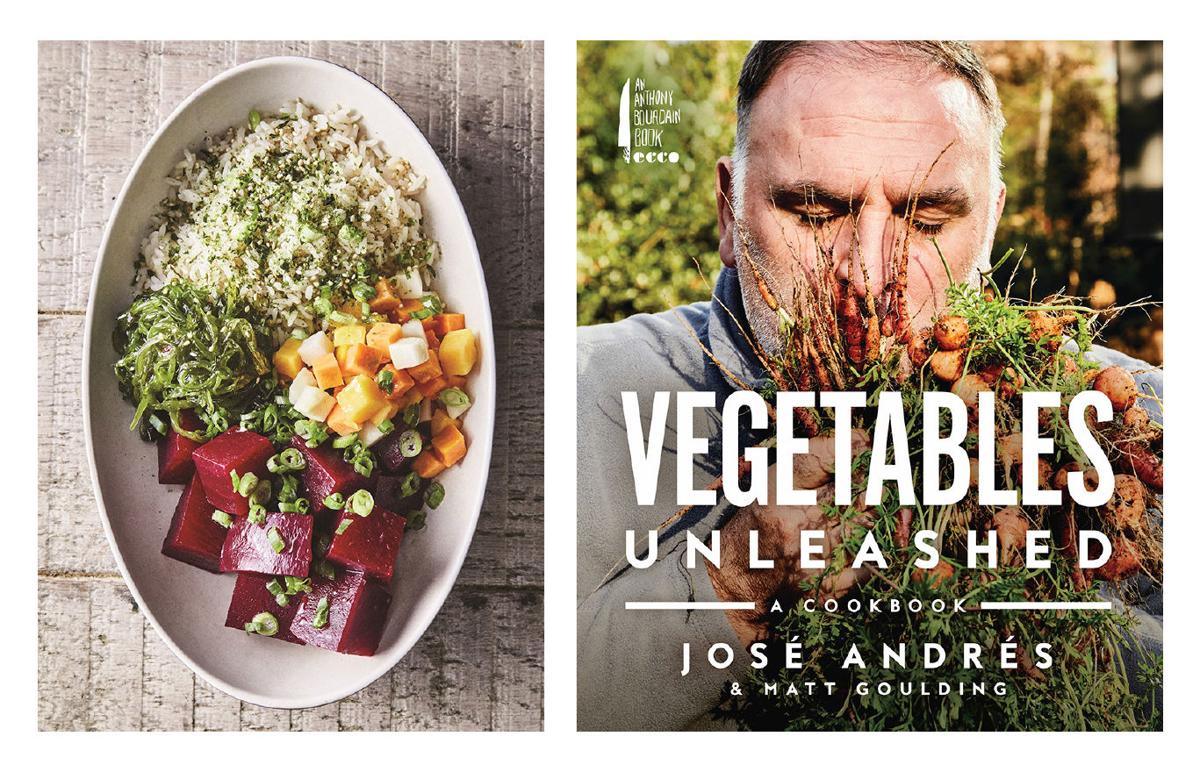 You may understand that a meat-based diet has a bigger carbon footprint than a plant-based diet. You may have read the research showing that both vegetarians and “flexitarians” (vegetarians who stray on occasion) are healthier and live longer than people who stick to a meat-heavy diet. Perhaps you’re concerned about the welfare of animals, or maybe you just love vegetables. Whether your reasons are ethical, environmental, or nutritional, there has never been a better time to eat more veggies. These three new books — from a former farmer, a chef who’s been in the spotlight lately, and a family of cooks with a recognizable name — are here to help.

If you want just one new book to help you delve into the wide, wide world of vegetables, turn to the tome-like Ruffage: A Practical Guide to Vegetables by Abra Berens (Chronicle Books, 464 pages, $35). Basically Homer’s Odyssey of vegetables, it offers nearly 500 pages packed to the hilt with the clear, familiar, and unintimidating insights, advice, and methods used by Berens, a Midwest-based chef and founder of a Michigan farm. The photos by EE Berger (who incidentally is the talent behind the hypnotic images of the American Spoon catalog and website) are inspiringly artful. This will likely go down in the annals of cookbook-ery as one of those everyone-should-have volumes.

The Midwest’s four dramatically distinct seasons mean that veggies are only in their prime for a short while, and perhaps that’s what motivated Berens to compile this collection of more than 300 ways to make the most of them — not to mention 30-plus recipes for pantry staples, which she equates to “a quiver of arrows, at your back and at the ready,” to elevate almost any vegetable or dish. As expected, she also provides a handy glossary, which includes classic terms and techniques but also a hilariously specific definition of glug, a holdover, she says, from her grandmother’s recipes.

Berens’ ode to vegetables is organized alphabetically so you can easily find recipes for the produce you have on hand or have just nabbed at the grocery store or farmers’ market. Each chapter begins with an essay inspired by the veggie in question, wherein Berens shares a bit about her life and philosophy of eating, followed by tips on how to buy and store that vegetable. Chapters are then divided according to preparation technique (including serving raw, braising, roasting, grilling, and even making confit), and with each of these she offers two to four variations.

While Berens is unabashedly well versed in, dedicated to, and maybe even a little in love with vegetables, she is not a vegetarian, and this is not a vegetarian cookbook. You’ll find recipes here for shaved cauliflower salad with smoked whitefish mayo, lemon, radicchio, and herbs; a chicken thigh to top your celery root puree; a pork chop dressed with garlicky kale relish; and a salad of marinated peas with “yesterday’s roast chicken.” She omits the newly trendy Brussels sprouts but does include perhaps the most hipster vegetable ever, the ramp (or wild leek). And thankfully there’s squash, for which everyone needs more and new recipes this time of year.

José Andrés is not a vegetarian either — “not even close,” writes Barcelona-based journalist Matt Goulding. But in Vegetables Unleashed: A Cookbook (Anthony Bourdain/Ecco/HarperCollins, 368 pages, $39.99), the chef and philanthropist known for his boundless gusto and imagination attempts to turn you on to the deep allure of vegetables — how to eat more of them and in diverse, satisfying ways. “I want to show how to stuff a squash with quiche, how to turn tomatoes into tartare, how to make ceviche from mushrooms and sweet potatoes,” Andrés declares.

Vegetables Unleashed, co-authored by Goulding, offers practical ways to deal with familiar foods, along with new takes on typically meat-centric recipes, like a “poke” bowl with beets standing in for tuna; a fishless bouillabaisse of fennel, potatoes, tomatoes, and a rouille; and a beefsteak-tomato sandwich so luscious you might be willing to forgo actual beef. (In winter, it becomes the vivid Beetsteak Burger.) The book’s vibe is adoring and dedicated but not snobby or rarified: It includes two pages on how to boil water, as well as recipes for cacio e pepe and corn on the cob made in a microwave.

Naturally, Andrés includes some of his mother’s recipes, including an ode to the Spanish tortilla and variations on Spanish classics, like trinxat, the Catalan cabbage-potato dish, and gazpacho (so versatile that he suggests it should be a verb rather than a noun: “Will it gazpacho?”). He addresses cocktails, too, including an heirloom-tomato Bloody Mary, a salt air margarita (agave is a cactus, and a cactus is a vegetable, right?), a vegan pisco sour, and, of course, sangria.

Andrés is known for his activism, so it’s not surprising to find suggestions on how to reduce food waste — namely, cooking with vegetable scraps — as well as profiles of several farmers. He wants you to know that plants can change the world, but you’ll find no recipes for mung-bean egg substitute or tempeh bacon here. He does offer a mini-essay on Impossible protein, which he mentions not to appeal to vegetarians but because “we need to find a sustainable solution to one of the largest challenges of human history: how to feed a rapidly expanding world without destroying this beautiful planet we inhabit.”

Peter Frank Edwards’ photos include those of some of the profiled farmers and gardeners, other chefs, and Andrés himself — sporting his familiar “Immigrants feed America” and “We are all dreamers” T-shirts while cooking, teaching classes, and dining with his family. In a few adorably goofy shots, he’s shown reclining in a giant bin of greens and surrounded by earth-laden veggies just plucked from the garden. Edwards’ up-close food shots are deliciously vivid.

“Eat food. Not too much. Mostly plants.” Remember that haiku-like directive from Michael Pollan, circa 2007? Mostly Plants: 101 Delicious Flexitarian Recipes from the Pollan Family (Harper Wave/HarperCollins, 287 pages, $29.99) takes its title from that now-famous advice, and the book’s authors should feel free to crib from Michael, since they are his mother (Corky) and three sisters (Dana, Lori, and Emmy Award-nominated Tracy, of Family Ties fame).

Mostly Plants appeals to cooks of all skill levels. For the true beginner, the Pollans offer a list of suggested basic pantry items and recipes for starter dishes like quesadillas, bowls, nachos, and panini. They include many more-complex undertakings, of course, like veggie versions of normally meaty items — such as burgers, meatballs, and cutlets — as well as ingredient- and labor-intensive dishes I’ve added to my own to-do list, like Thai curry, mapo tofu (adapted to omit the traditional pork), and Three Greens Spanakopita Casserole. Some of their “Sage Advice and Thyme-Tested Shortcuts” seem designed for cooks new to the kitchen, but even the most seasoned among us can pick up a helpful nugget by perusing these kinds of lists (like coating your grater with nonstick spray to ease the process and cleanup).

As expected, the Pollans dedicate an entire chapter to salads, and frankly, I can’t wait till the short, dark days of January to make the White Winter Salad, which uses almonds, cauliflower, shaved fennel, and pear to help you get your veggies after summer’s glorious bounty is a distant memory. They devote one chapter to seafood and yes, even “meat mains” (in all of which vegetables play a pretty hefty supporting role). They cover side dishes (including instructions for making your own chips and salsa) and lovely desserts, many of which are not simple cobblers or shortcakes but pies and cakes incorporating fruits and vegetables. As soon as I can bear to turn my oven to 400 degrees, I’ll be making their rustic apple galette with apricot glaze.

This is no finger-wagging tome intended to shame you into eliminating meat from your diet: In Michael’s words, Mostly Plants is “not dourly anti-meat” but “ecstatically pro-plant.” The Pollans know that for many people, giving up meat entirely is not only undesirable but impractical, but they do point to the eye-opening statistics about how vegetarian and vegetarian-adjacent diets reduce greenhouse gases and save water.

With modest goals in mind, they’re here to assure you that adding more vegetables to your life can actually satisfy your culinary desires and your appetite. If you’re still having trouble imagining a dinner sans critter, Nicole Franzen’s colorful, perfectly lit photos will surely provide the appropriate motivation to stock up on veggies and get cookin’. ◀