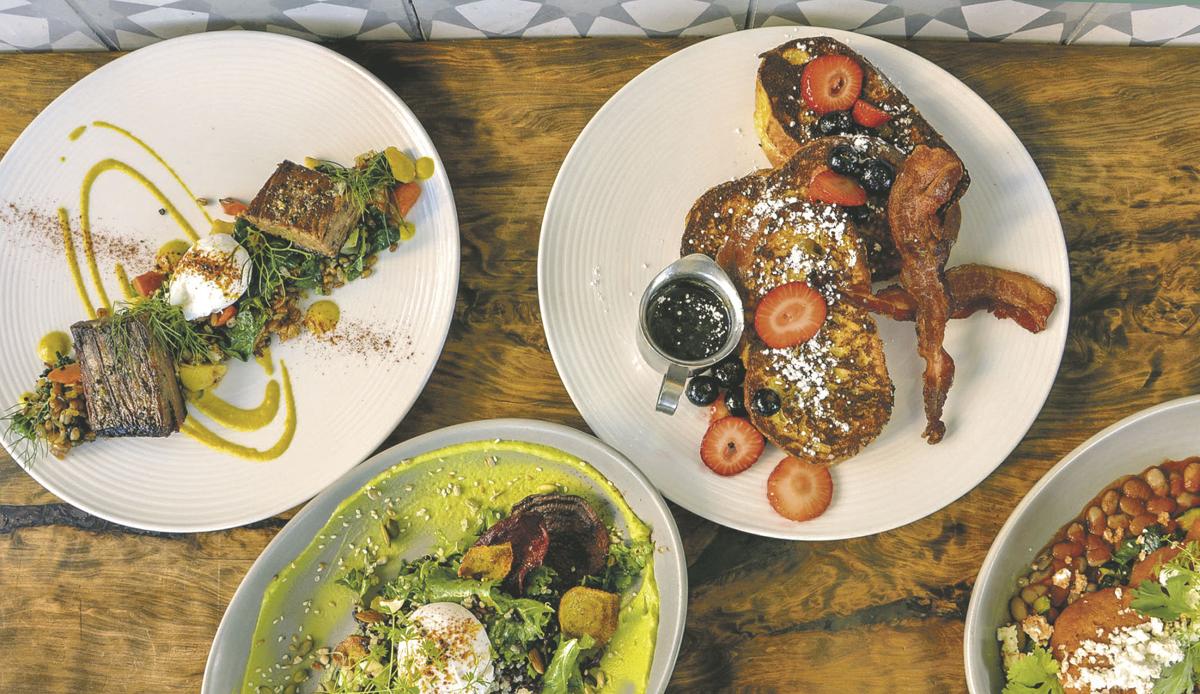 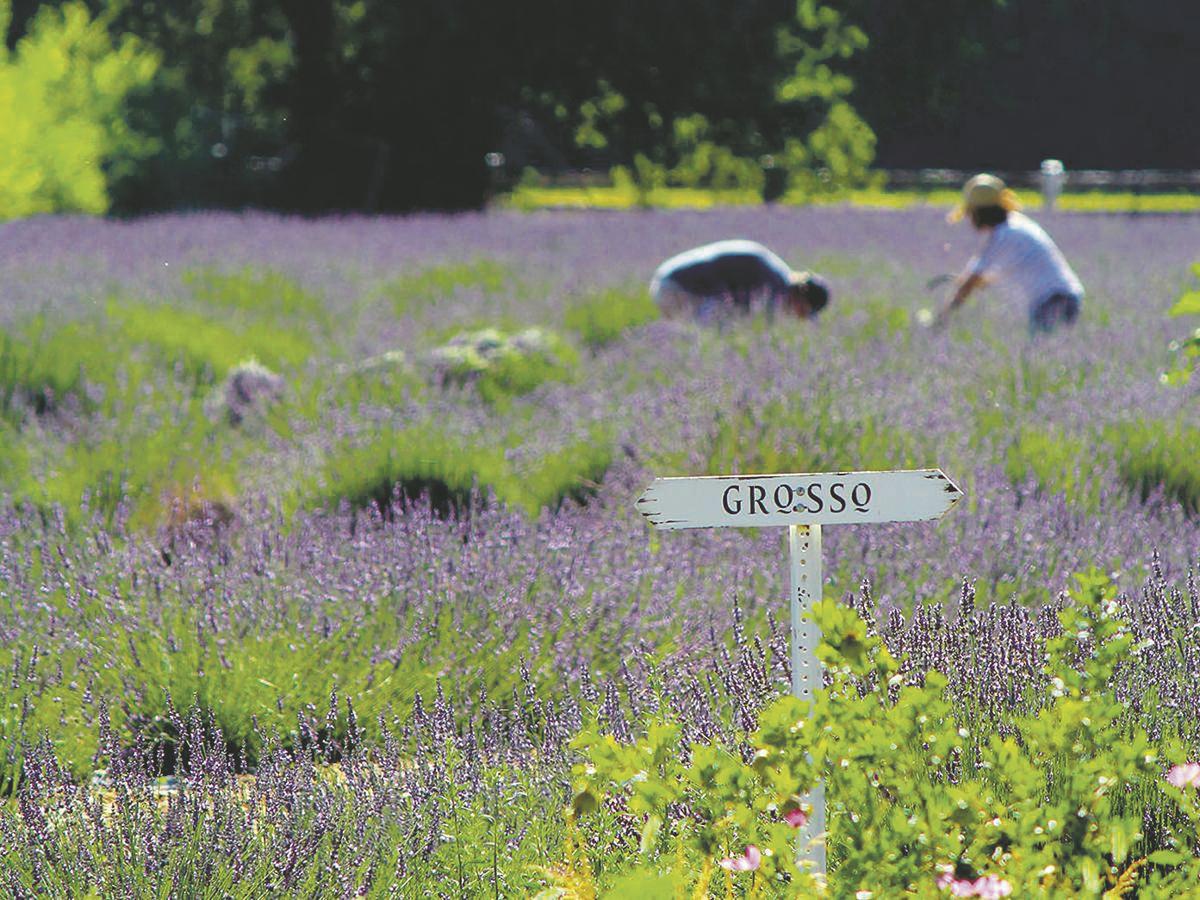 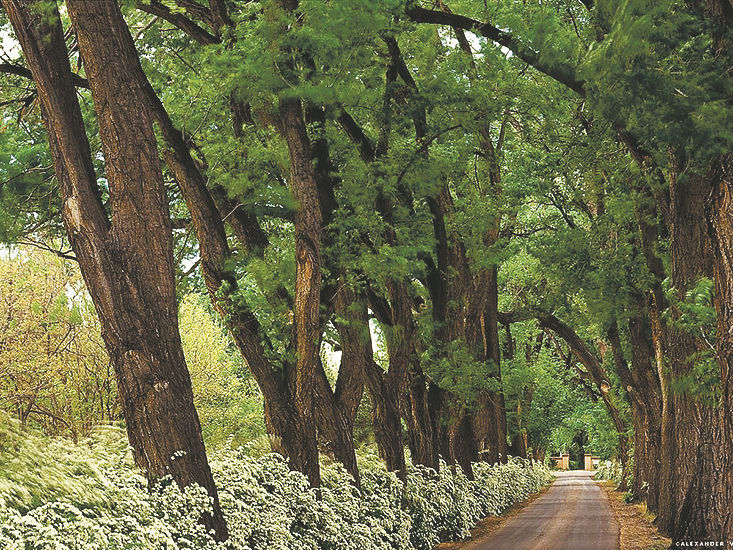 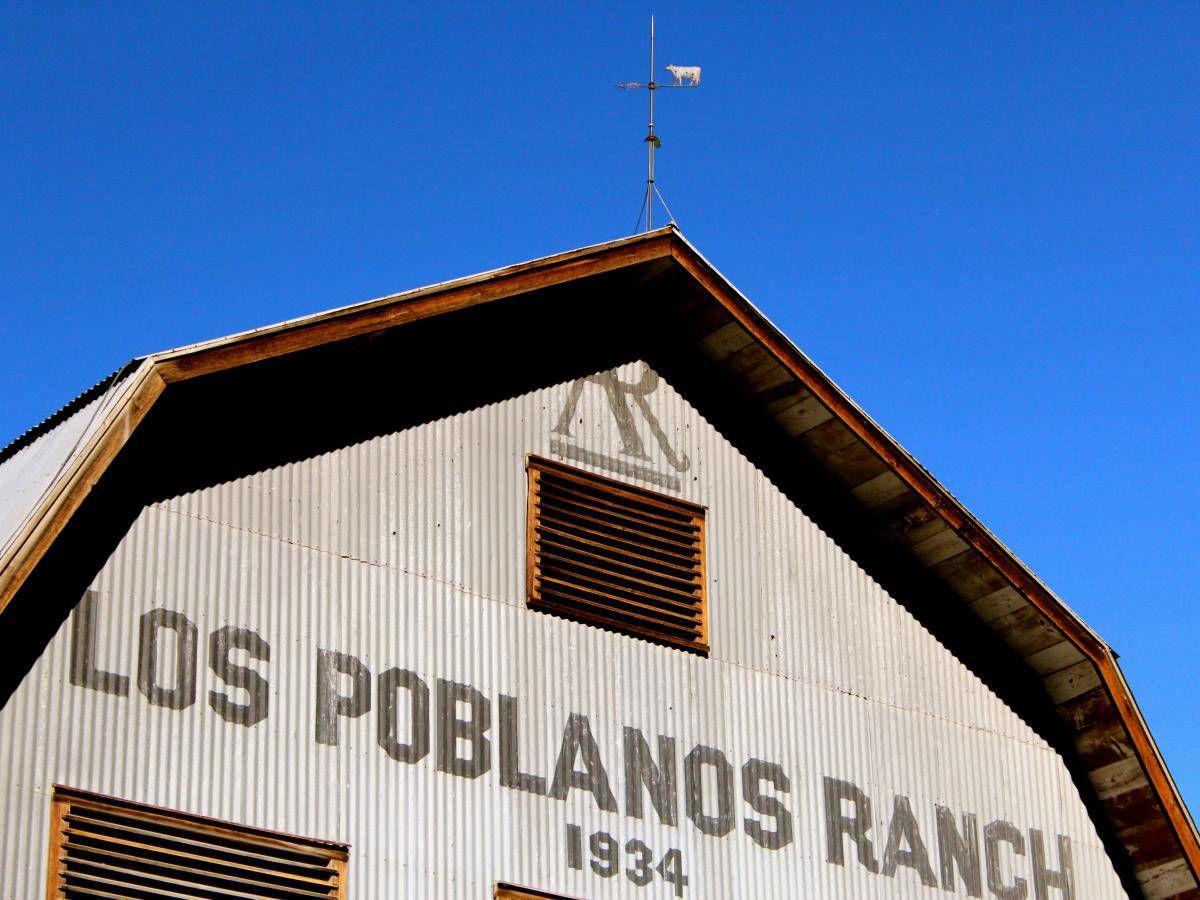 Through the picture window, the Sandia Mountains are blushing hot pink. We’re sitting under the corrugated arch of an old dairy barn, the rack of lamb on the plate is still ruddy in the center, and we’re talking about how we can taste life — or its glamorous juices — in every bite.

That conversation began with the chilled beet soup ($10), the way its earthy maroon bloom and zippy garlic-scape crema plunked the farm onto the table. We’re speaking more than metaphorically: At Campo, the extraordinary restaurant situated amid 25 acres of lavender fields, cottonwood trees, and fertile bosque land along the Río Grande at Los Poblanos, the farm is on everyone’s lips.

You’ll see hooped greenhouses and planted fields while driving into the allée of giant cottonwoods at Los Poblanos Historic Inn and Organic Farm, along with alpacas, peacocks, guinea hens, chickens, and a cat named Mouse. Two silos stand sentinel at the entrance to the grounds, abutting the Farm Shop, where you can buy Los Poblanos-branded lavender beard oil, lotion, and green-chile jam. Across from the store is Campo, the bar and restaurant helmed by executive chef Jonathan Perno, a five-time James Beard award semifinalist for Best Chef in the Southwest. Here, the ethos is closer than farm to table. It’s what they call “field to fork,” with everything as organic and locally sourced as possible.

Although the restaurant is not yet two years old, Perno, a native New Mexican, is an old hand at Los Poblanos, having spent 12 years cooking at the inn. At Campo, he’s still turning over new soil. The inventive seasonal menus and herbaceous cocktail list pay tribute to the idea of querencia, or the people’s love for the land, combining regional culinary traditions with the freshest possible ways to eat — and a fair amount of lavender. At the time of our visit, the new spring menu was two weeks old.

Back to the beet soup: We traded spoonfuls back and forth until it was gone. In the intervals, we dove into a spicy halibut ceviche with blue corn chips and pickled green chile ($16), sipping on well-balanced, sweet-tart Campo Margaritas with blanco tequila and lavender salt ($12).

The grilled rack of lamb ($40), from Shepherd’s Lamb in Los Ojos, is served with tender parsnips, fennel, and carrots and covered with a mild mole rojo sauce. The mole is cacao-free and nuttier than most, featuring roasted pepitas. It’s sided with a rustic, crumbly lamb-neck tamale that’s less masa, more meat and chile. The elemental entrée might be seen as a tribute to the Ancestral Puebloans who first settled the land at Los Poblanos, and who perhaps ate the same sorts of meals.

A side of grilled asparagus ($8) came covered in a sheet of melty lonzino, an air-cured pork loin that resembled a more elegant prosciutto in flavor and appearance. A basket of fritto misto veggies ($9) dusted with pecorino starred tender cardoons (a thistle-like cousin of the artichoke), as well as artichokes, onions, and fried wheels of preserved lemon, though it seemed to lack the advertised black garlic aioli altogether.

On the Sunday evening we visited, Campo was out of two menu entrées we had anticipated: cochinita ravioli ($26) made with pork that is slow-roasted in an underground pit on the premises, and a seared halibut ($38) with asparagus, potato, preserved lemon, and alliums, a dish that seemed designed to celebrate the season. But we contented ourselves with a succulent milk-braised pork loin ($33) from Kyzer Farms, just down the road from Los Poblanos in the South Valley. It came with roasted vinegary cabbage and seared potatoes, crisp on the outside and yielding to velvet centers. For dessert, we shared the multilayered honey cake ($11), a homespun tower of spiced cake, tangerine crème anglaise, and honey brittle.

Breakfast, which is served daily, offers a more inexpensive way to sample the farm’s output — but get there early, because they don’t take breakfast reservations. At 10 a.m. on a Sunday, the place teemed with hopeful brunchers. But the half-hour wait for a table was worthwhile in Campo’s airy atrium, where you can sit at the long wooden bar, sipping a latte blended with lavender syrup and sprinkled with the purple blossoms ($5) and admiring the retablos honoring Los Poblanos’ patron saint, San Ysidro. (That Spanish farmworker, whose feast day is celebrated May 15, is a lofty mascot for the place: It is said that more than once, angels miraculously plowed his fields for him.)

Campo’s breakfast menu is divided into three sections: “From the farm,” “From the field,” and “Farm classics.” We chose one dish from each, beginning with the field: a Caprese salad ($13) of house-made mozzarella with golden beets, cucumber ribbons, dried red chile, arugula pesto, and balsamic, with two large slices of garlicky toasted focaccia. The salad was thoughtfully composed, each element exactly the right size and flavor.

From the farm came two hunks of smoked brisket over mixed grains (brown rice and wheat and spelt berries), spinach, fennel, parsnips, chard stems, and leeks ($15). This mound was topped with a quivering poached egg; a rooty parsnip-goldenmilk sauce laced the edges of the grains. It was a satisfying breakfast, wholesome yet substantial without being a gut-buster.

For that sort of decadence, we turned to a classic French toast on cinnamon challah bread ($14), which was sprinkled with blackberries, blueberries, and sliced strawberries. The toast was a measured kind of sweet, served with an orange marmalade-spiked maple syrup and a tangle of substantial stiff bacon. Topping off the celebratory aspect of the meal, we opted for the Los Poblanos champagne cocktail ($12), a flute of bubbly with a cube of — what else? — lavender sugar. Speaking of, we’ll be back for the violet-hued Lavender ’99 ($14), a take on a French 75 with Domaine Saint-Vincent brut, Santa Fe Spirits’ Wheeler’s gin, lemon, and lavender.

The light is different at Los Poblanos: It’s clearer and brighter down in the Río Grande Valley. The grounds invited a post-brunch investigation. There’s the greenhouse, in a state of rehabilitation after storm damage, the lush pond lined with weeping willows and benches for contemplation, the John Gaw Meem-designed cultural center and remodeled ranch house, and the acequia-fed formal rose garden, planned by the groundbreaking landscape architect Rose Greely in 1932. An enchanting saltwater pool for inn guests is partially hidden by fragrant climbing wisteria.

It’s tough to pry yourself away from this verdant wonderfarm, emerging from the valley to the world of strip malls and freeway on-ramps. But we might content ourselves with the reminder that Los Poblanos has been there for generations and is there to stay, ever-awaiting our next visit. We’ll keep coming back, especially as long as Jonathan Perno is devising menus there. ◀

Parking: Two lots on the premises, packed most weekends