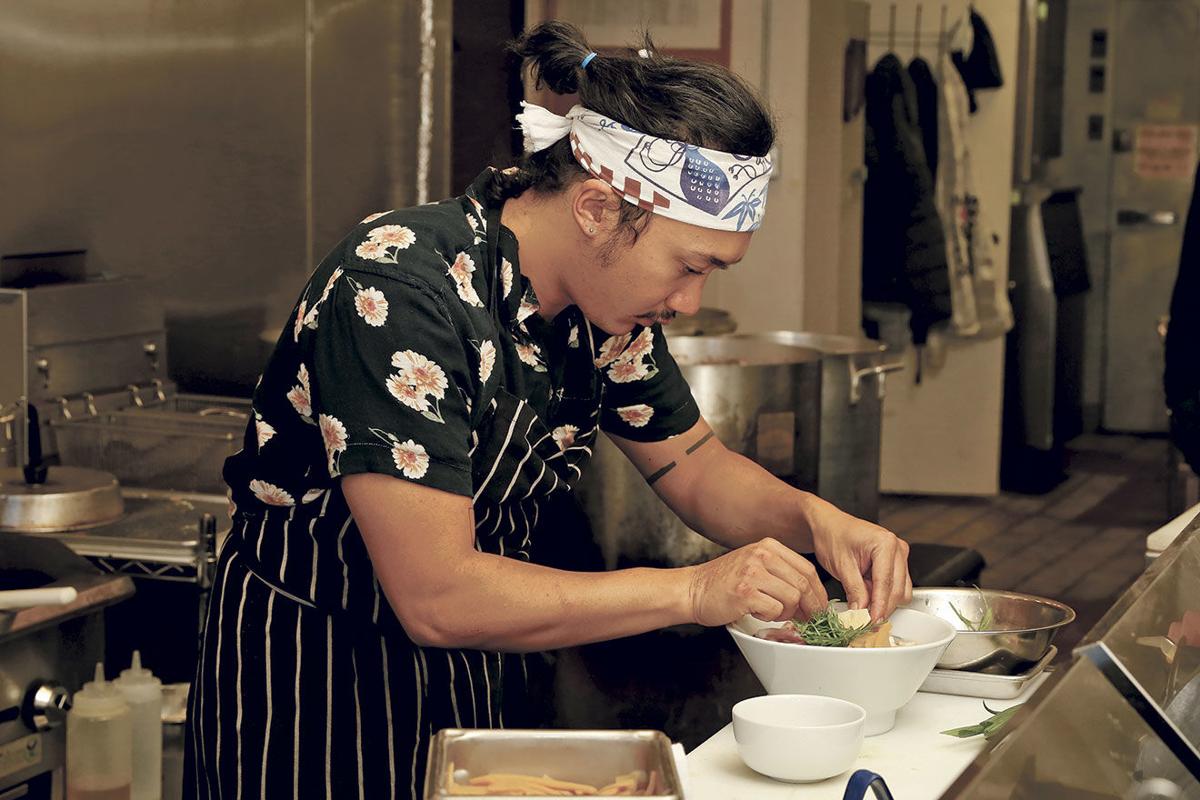 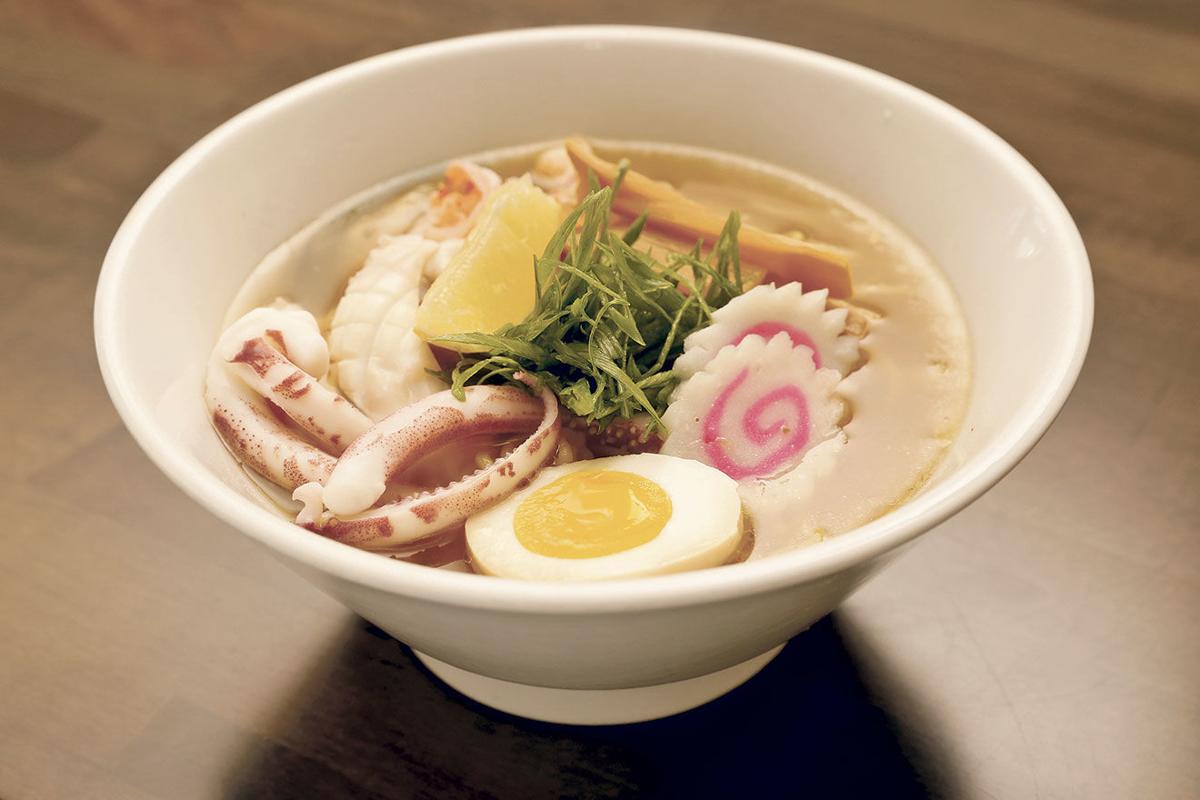 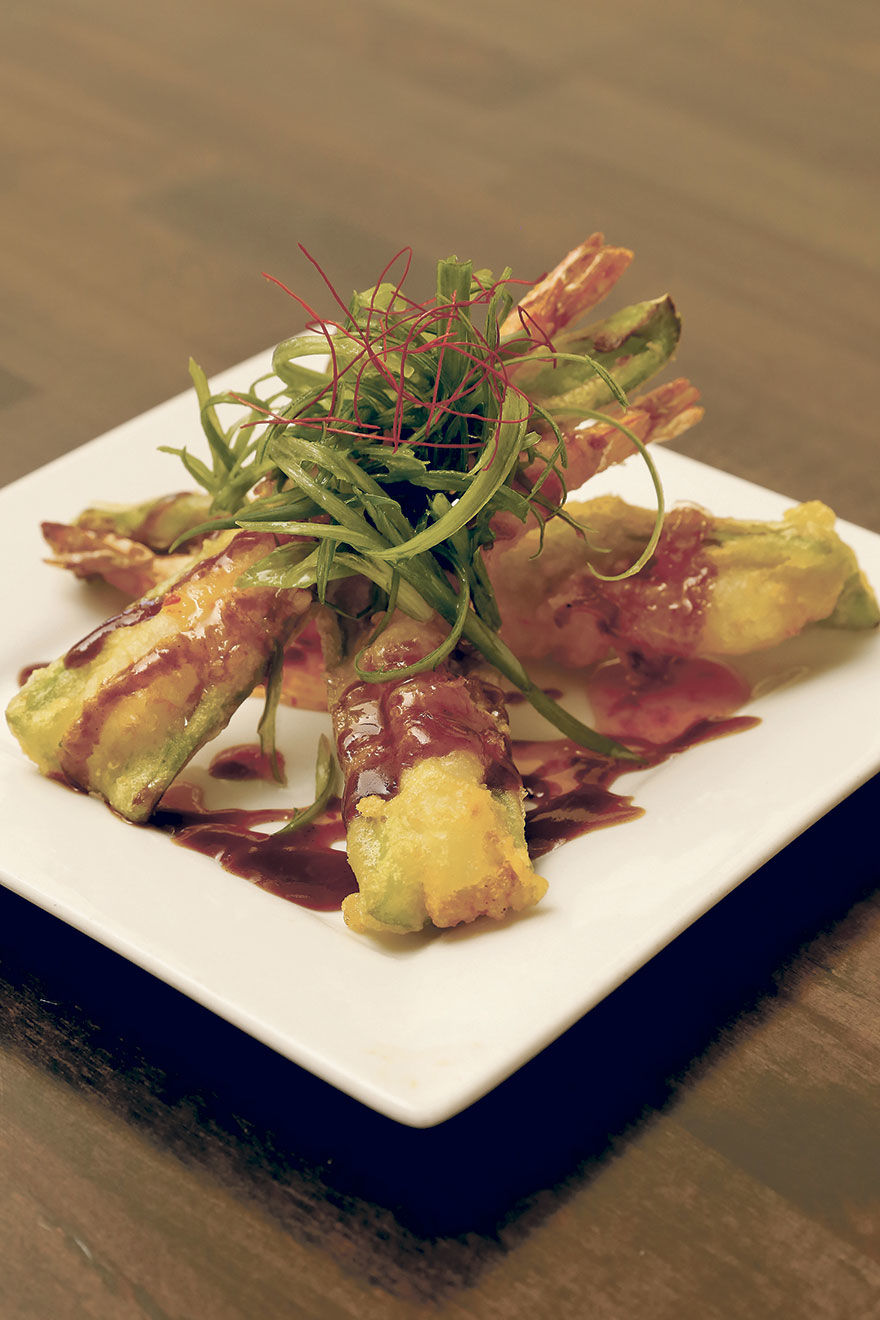 Noise level: bustling but not loud

“Eye the pork affectionately,” I said with a wink to my dining companion. We’d stepped in from the cold night and settled at a small table in the bright, bustling dining room of Mampuku Ramen. Now that the steam from an oversized bowl in front of him was fogging his glasses, I felt compelled to cite a silly scene from Tampopo, the quirky 1985 Japanese “noodle Western” comedy, in which an elderly man schools a younger fellow in the proper way to eat ramen.

Joking or not, I needn’t have offered any direction, because he’d been regarding his bowl eagerly from the get-go, chopsticks in one hand and spoon in the other, ready to start slurping. Diners across the crowded room seemed to be relishing their bowls with equal appreciation, while knots of hungry patrons waited eagerly outside, in the golden glow cast by the oversized window. This busy new noodle joint, which occupies an inauspicious spot beside a wireless-carrier outpost and a Jiffy Lube, opened to much fanfare earlier this fall. These days, if you arrive at a reasonable dinner hour like 7 p.m., you might wait 40 minutes or more for a table.

Mampuku is a small space, and manager Ayame Fukuda (daughter of Shohko and Hiro Fukuda, of Shohko Café fame) makes no-nonsense use of it. The décor is minimal and perfunctory, with generic black tables and chairs and only a few elements of Japanese flair mounted on white walls. Square footage is maximized: You’ll be close enough to neighboring diners to overhear everything that’s not whispered and to surreptitiously scrutinize their social media scrolling. Mampuku would do well to extend the check-in counter to include a bar where hurried solo diners can bop in for a quick lunch without taking up a table that can accommodate two (which might also help shorten the wait list).

Service is friendly and efficient, though during busy hours, things veer toward the frantic. The view through the wall of south-facing glass is hardly what anyone would call picturesque. But it does serve as something like a living billboard — with chopsticks transporting pinched dumplings from plate to palate and bowed heads momentarily tethered to bowls by noodles — that makes you want to pull a U-ey.

On its two sides, the single-sheet menu manages to cover quite a lot of ground, with broths ranging from light and subtle to heavy and powerful — a tangle of ropy noodles lurking beneath the surface of each one. Most receive standard trimmings of green onion, half a hard-cooked egg (often gloriously gold and gelatinous), bamboo shoots, and whimsically pink-whorled Naruto fish cake (named after the Japanese strait famous for its swirling tidal whirlpools). Mampuku even has your back if you simply can’t imagine a meal without a New Mexican influence, offering a creative red chile ramen with spicy ground chicken (and the option to add grated sharp cheddar for a few extra bucks).

Simple but satisfying is the vegetable ramen ($10.95), which features bell pepper, cabbage, and tofu in a beige miso broth (our choice over the shoyu, thanks to recommendations from the staff). Add some extra green goodness via pickled mustard greens ($2.25) or some funky zing with a dish of exemplary traditional kimchi ($2). The fried tofu is battered, which is not normally a drawback, but when these cubes plunge into their sultry bath, their coating begins to dissolve into an unattractive, mealy paste.

In the soothing, easygoing, mostly translucent broth of the seafood ramen ($12.95), I spied a few small plump shrimp, a mussel who’s the sole passenger in a shell-boat, a few nuggets of scored squid, and a spiral fish cake. A squeeze of lemon from the wedges floating in the broth provided a lovely brightness. Still, I felt compelled to turn to the tabletop condiments, with soy sauce and chili oil giving this soup a welcome oomph. Seasonings like sriracha, standard elsewhere, are only available for an upcharge, which seems a bit miserly to me. The salty, crunchy, strawberry pink spears of gari (pickled ginger) make a magnificent palate cleanser.

Mampuku offers distinctly pork-rich tonkatsu — king of the ramen realm — in two levels, each featuring slabs of chashu pork. The “black” version ($11.95) is deeply rich, cloudy, and fortified with roasted garlic oil and shimmering sheets of forest-green nori, whose sea-vegetable flavor manages to hold its own in the presence of the pork.

Also on the rich end of the spectrum is the curry ramen ($11.95): noodles, red bell pepper, disks of manageably hot jalapeño, and shockingly tender brisket in a heady, raucously flavorful sauce resembling a brick-red Louisiana roux. It’s a solid curry, but if you’re in a true ramen state of mind — eager to slurp hot liquid between bites of chewy noodles without feeling stuffed when it’s all said and done — you’d best make a different choice. The medium here is more akin to gravy than soup.

The list of izakaya (or small plates) includes gyoza ($7.50) plump with a sweet and fatty chicken-shrimp blend. Their wrappers are tender and surrender willingly — just the right thickness to be noticeable without turning gummy or overpowering the goodness they swaddle. One day’s special izakaya was a trio of house-made pickles ($6): hot and wildly garlicky daikon kimchi, semi-traditional cucumbers, and delightfully chewy and sweet pieces of tsukudani kombu and shiitake. The pretty cucumber-avocado salad ($6), dressed in just the right amount of a creamy sesame elixir, is a celebration of textures, with snappy radish, pickle-crunchy cukes, and a buttery dice of avocado.

Green chile stuffed with shrimp ($6.50) — coated in a crisp tempura batter and topped with a bright green-onion tendrils and saffron-like red pepper threads — make for quite a dramatic plate. The pepper is acidic and crunchy but not at all spicy, the seafood delicately chewy and sweet. But the chile sauce was overapplied, tilting the overall effect toward the sticky and sweet. Sprinkled with sesame seeds and curlicues of green onion, the Nagoya-style fried chicken wings ($7) offered a shocking fall-off-the-bone tenderness, an airy-crisp crust, and a drizzle of spicy-sweet sauce. If Nagoya-style wings have a fan club, consider me its newest member.

Mampuku does not serve beer or wine — at least not yet — but to be frank, I’m sort of glad. The mere aroma of miso broth or frying tempura makes me inclined to order a glass of sake or a Japanese beer, but booze just takes up stomach space. Sure, Mampuku reportedly translates as “full belly,” but in this place, I want to save as much room as possible for food. ◀

My daughter has been making this type of noodles for years at home. I am able to keep my money and enjoy a good glass of wine at home.