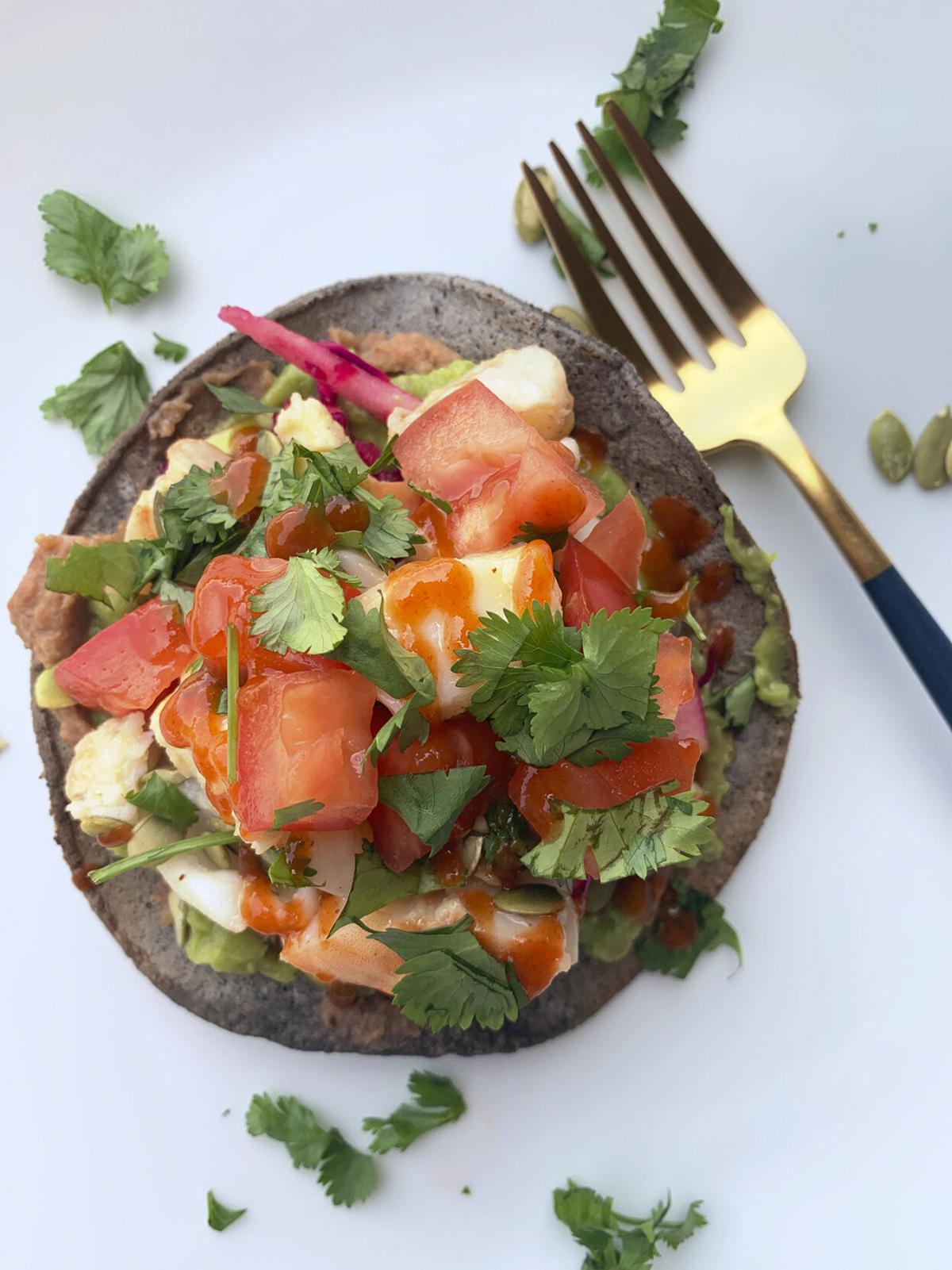 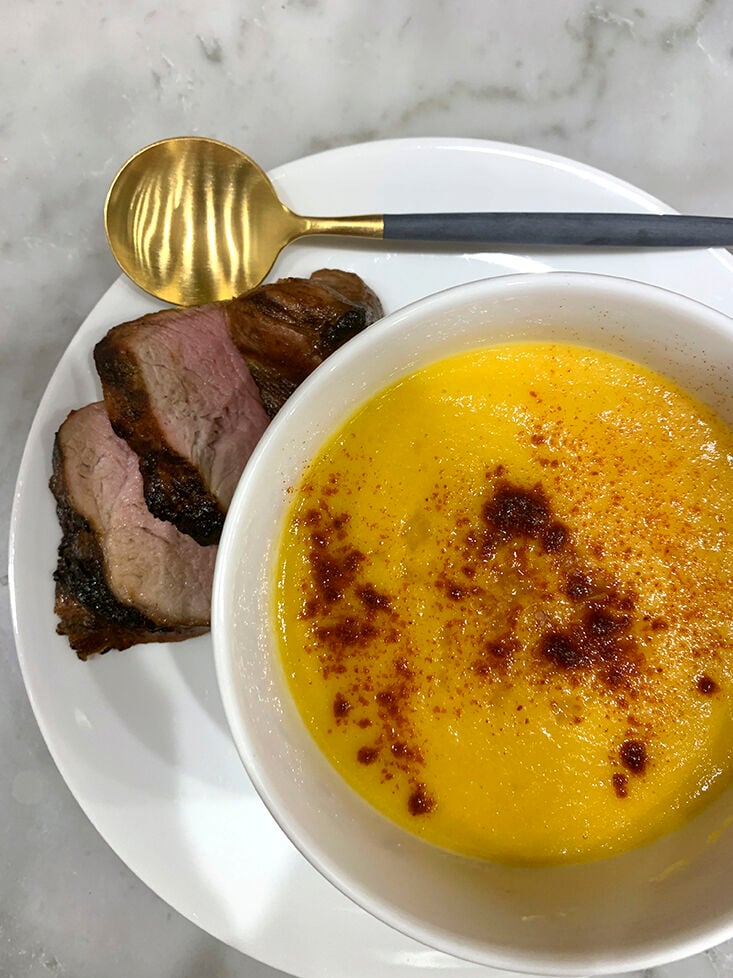 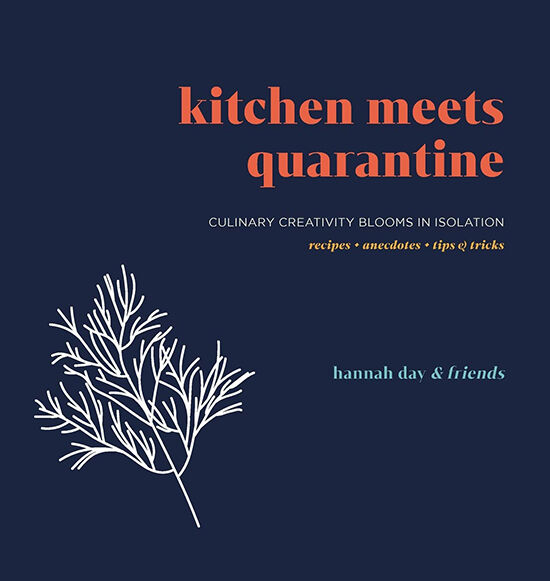 During our year inside, I’ve gotten more than a little tired of my go-to flavors and formerly favorite recipes. Roast chicken with onions and paprika? Red curry peanut stir-fry? I’m looking at you.

But I recently reinvigorated dinner with recipes from Kitchen Meets Quarantine: Culinary Creativity Blooms in Isolation, edited by Santa Fe resident Hannah Day (Dove & Rock Press, 2020, 187 pages, $40). I tested my mettle with dishes that were new to me, and I found fresh life for some of my standards with unfamiliar sauces and preparations. Some of the recipes are a snap, and others are more challenging. It was worth it. I ate like royalty.

Day isn’t a professional chef, nor does she typically write or edit cookbooks. (She’s an art director for a California cosmetics company.) The idea came to her late last spring, as the pandemic raged across the world, and people took to the streets to protest police killings of Black Americans. “I realized that so many people were forming these new relationships with their kitchens and putting energy into their meals. And, in parallel, we found out that we aren’t where some of us thought we were with racial justice,” she says. “I felt like I needed to do something.”

Day collected 60 recipes for starters, salads, soups, main dishes, breakfasts, desserts, and cocktails from her family and friends, who also helped with illustrations, editing, and proofreading. Some dishes come from accomplished home cooks, and a few are courtesy of professionals. All proceeds from Kitchen Meets Quarantine (available at kitchenmeetsquarantine.com) benefit Know Your Rights Camp, a nonprofit organization founded by Colin Kaepernick. It holds social justice educational events for young people of color. So far, the cookbook has raised about $1,200.

But Kitchen Meets Quarantine is more than a cookbook. It’s a time capsule of the pandemic era that contains anecdotes about cooking, work, fighting COVID-19, and life inside.

“Most of the people in this book are having a more privileged experience than other segments of the population,” Day says. “But we’re all still experiencing something heavy. I said the anecdotes could be funny, dark, sad, hopeful. I just wanted it to be authentic. My brother-in-law is a physician and an infectious disease specialist. He’s knee-deep in this, but his passages are so funny.”

The first dish I made was fancy lobster and chorizo tostadas, but I made them with shrimp. (Almost every recipe in the book has suggested substitutions, and I had half a bag of shrimp in the freezer.) The recipe comes from Rachel Fanning, an Albuquerque dentist who writes that she created it “during a week of quarantine where I wanted to run down the street screaming in frustration with my 4-year-old daughter. … I needed something to look forward to and chicken tostadas weren’t going to cut it.”

Each layer of the tostada requires lots of chopping and mixing. The result is a rich, creamy, yet pleasingly acidic dish full of different textures. I got to quick-pickle some radishes and onions, which I’d never done before. And it probably goes without saying that tender shrimp mixed with lightly crisped pork chorizo, spooned on top of spicy Siracha mayo, is a combination conceived by angels. But the most palate-surprising layer was the Napa cabbage slaw with Granny Smith apples, cilantro, kosher salt, and lime. So simple, so fresh — and I used the leftovers as the basis for a salad the next day.

I make salmon about once a week. I usually top it with garlic and lemon, maybe some herbs. The Swedish salmon with dill sauce in Kitchen Meets Quarantine is similarly simple but oh-so-indulgent. Santa Fe real estate appraiser Anika Gusterman gives us her family’s recipe for salmon steamed with lemon, topped with a sauce that is made mostly of sour cream and mayonnaise, pungent with fresh dill and raw onion. Although this dish comes from Sweden, it reminded me of long-ago holiday meals with my older relatives, immigrants from Eastern Europe.

Day grew up in Louisiana. “To be honest, there wasn’t a ton of cooking in my house. We were a McDonald’s, frozen potpie, fish stick family. Maybe my habits are in reaction to that,” she says as she reflects on her penchant for creating new flavors out of what she has on hand, like lavender sugar, which she puts in baked goods. She insists that making it is simpler than it might sound. “We have lavender in our backyard. You cut the flowers, dry them, then put the florets in the food processor with sugar. That’s it. Then you can do a million things with that.” She used to have a vegetable garden, but she removed it during quarantine in order to install a trampoline for her two kids.

“My husband has a really green thumb. He grows herbs. I’m always borrowing from the rosemary and the sage,” she says.

Day contributed several Asian-inspired recipes to the cookbook, including cold peanut and sesame soba noodles, soy-glazed chicken thighs, and red curry chicken soup, because she loves the flavor profiles of ginger and lemongrass. (I made the soup. It’s easy, tasty, and even better the next day.) But when asked about her favorite recipe from a contributor, she said, hands down, it’s the pasta Bolognese from Travis Rea, of Alameda, California.

“I’m not a big meat eater, but Travis is a professional chef — and holy moly. It is heaven on Earth. It made me rethink my stance on eating beef,” Day says.

I had to try it. My pasta sauces tend to be rather bitter, which cooking shows tell me is because I don’t cook them long enough to get rid of the tinny taste that metal cans lend to tomatoes. Rea’s recipe calls for 28 ounces of canned tomato purée to simmer in a Dutch oven for three to four hours, which would certainly satisfy the judges that populate the Food Network. Prep includes sautéing onion and garlic with bacon and four tablespoons of butter. But at the last minute, I realized I only had three tablespoons of margarine. I went with it. I also substituted goat’s milk for cow’s milk. I’d never even used my Dutch oven before — an ancient cast-iron monstrosity, with an ill-fitting lid, ordered from eBay. My final recipe blunder was using crushed tomatoes instead of tomato puree, a substitution we’ll chalk up to being distracted at the grocery store.

After about two hours, I could smell the sauce starting to burn. I hadn’t used enough liquid, and my stove’s flame stays rather high, even on its lowest setting. I thought I’d ruined dinner, but I’m not sure it’s possible to wreck this recipe. Even with numerous substitutions and novice mistakes, this was the finest pasta sauce I have ever made, and better than almost any I’ve eaten in a restaurant. It’s creamy and rich, with a slight sweetness that’s simultaneously enhanced by bacon fat and cut by dry white wine. It clung perfectly to the boxed penne I’d prepared, but this sauce is so good that I’m considering learning how to make my own pasta in order to honor it properly.

“I used to constantly default to making nachos and tacos. I needed to change that up,” Day says. “What I appreciated most about this project is that you don’t have to be a trained chef to participate in sharing recipes and to be creative. It was a really nice experience of bringing people together.” ◀

1½ to 2 cups diced vegetables of choice,

such as carrots and celery

Juice of one fresh lime

It is a good idea to have all your ingredients ready to go, as there is not a lot of time between steps. To prepare the lemongrass, roll stalk(s) with a rolling pin, then slice into 1” pieces. Set aside. Rub the chicken breasts with 1 tbsp. miso paste and seat in large pot with the coconut oil. Brown both sides (no need to cook through), remove and set aside. Don’t clean pan. Add more coconut oil if needed, then add the onion, ginger, garlic, and the remaining 1 tbsp. of miso paste. Sauté for a few minutes until onions are translucent and all is very aromatic. Separate any miso clumps. Now add your mushrooms and vegetables and sauté 3-5 more minutes. In a small bowl, whisk together the curry paste, fish sauce, and honey and add to pot. Shred or cube the chicken and add back to pot. Stir and let simmer for a few minutes. Now, add the chicken broth, crushed tomatoes, and lemongrass pieces. Stir. Next, incorporate the coconut milk. Simmer until all is tender and the chicken is cooked through. Taste and add any more of the curry/honey/fish sauce combo, or salt as needed. Cover and simmer on low for 10-20 minutes so lemongrass flavor permeates. Finally, right before serving, add the fresh lime juice and chopped cilantro. You may need to advise your kids not to eat the lemongrass — or have fun watching them try. — Kitchen Meets Quarantine: Culinary Creativity Blooms in Isolation by Hannah Day