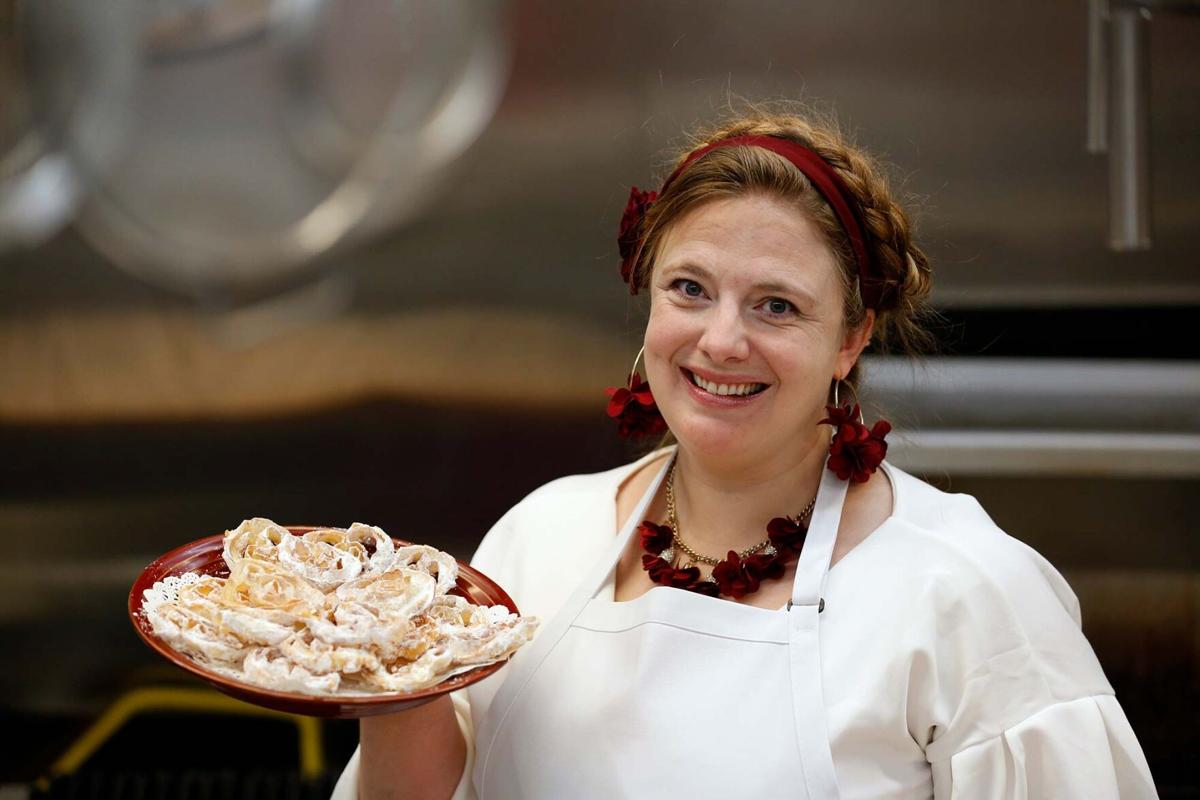 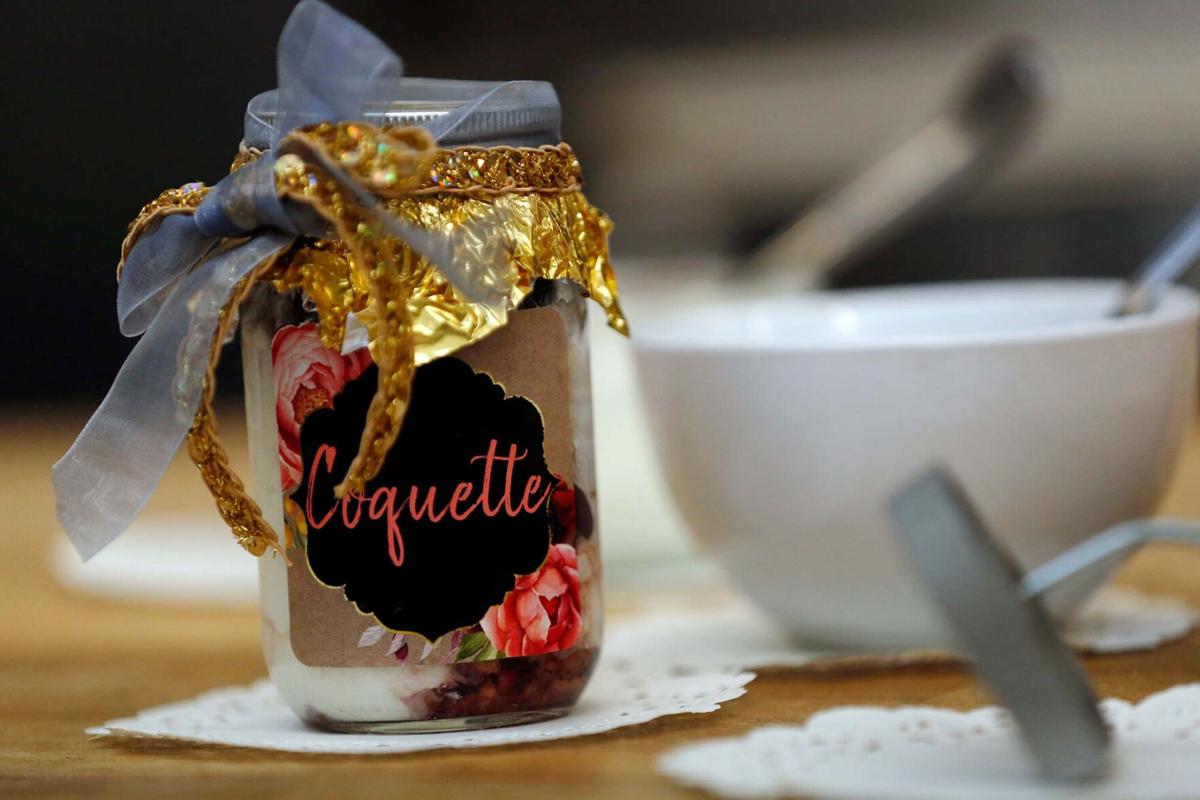 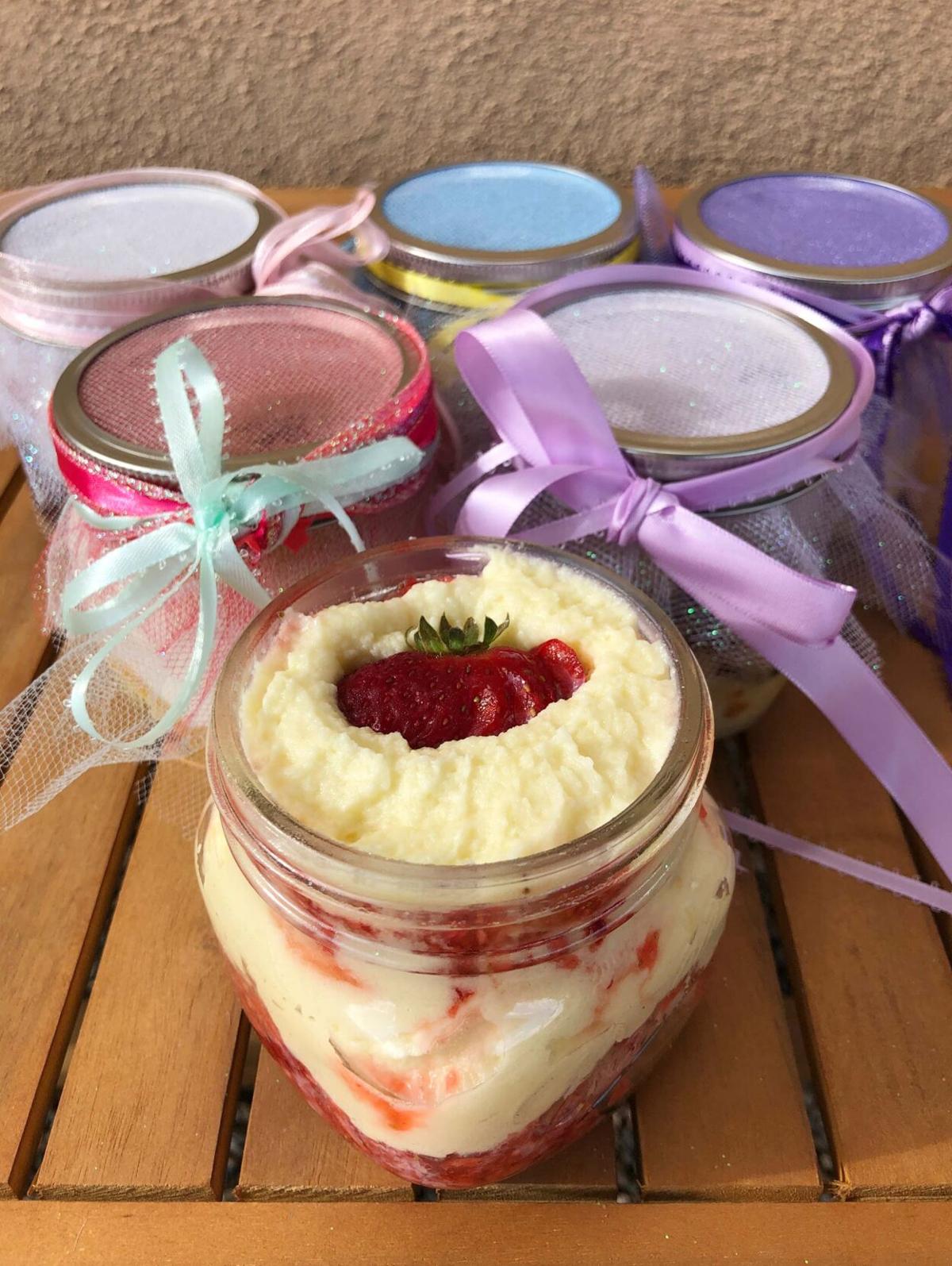 Caitlin Olsen started with strawberry shortcake and an interesting notion. The founder of Coquette, a boutique bakery in Santa Fe, commenced selling the summer confections in tall mason jars from her vintage tricycle in Montauk. She reasoned that there was no need for a plate. Beachcombers could just eat it right from the jar.

Baking was in her blood, but making it her profession came only after years of searching for her niche.

When she first visited the tourist destination at the eastern end of New York’s Long Island, it was on a whim. Olsen had been living in Brooklyn for about a month. It never felt like the right fit, says the Wisconsin native. She’d visited relatives in Manhassett and one day, she hopped on the Long Island Rail Road and took it all the way to the end.

It was the spring of 2019. She only had one contact in Montauk and no plans at the time to start a business, let alone eventually introduce a line of artisanal cakes to the Santa Fe market. She didn’t know what she was going to do. So Olsen, then 36, decided to work on a fishing boat.

“I ended up going out on a commercial fishing boat and working for four days,” she says. “I just felt like it was the necessary thing to do. It’s very, very hard work, and I got very sick. My job was mostly to get the dogfish sharks out of the fish piles. I had to pick at them with a piece of wood with a claw or hook on it. But it was faster to just grab them by the tails and throw them overboard. We were getting a lot of fish so we just stayed out for four days.”

Her time among the fishermen was sort of kismet. “Once I got to know some of the fishermen, they connected me to other people in town and helped me find a place to live. Montauk is a lovely little place, and I could walk along the beach every day.”

It was on these beach excursions that her quirky idea started taking shape.

There, she opened Coquette. The name, she says, reflected the playful, flirty aspect of a product being offered by a friendly, outgoing woman on a vintage bike. “ ‘Coquette’ means ‘the flirtatious woman,’ ” she says. “The meaning is a little more severe if you go into the history. There’s a character named Coquette, and she’s basically a homewrecker, which is not what I intended, and I didn’t even realize the connotation when I named it that. There’s also a café in Milwaukee called Coquette Café. It was a special place that’s no longer in business. So it’s also an homage to that place as well.”

Her grandmother, Varian, taught her to bake when Olsen was a child. One of the first things she learned how to make was Danish pancakes, which, she says, are similar to crêpes but with an additional egg used in the batter. She got hooked on all the scrumptious delicacies that Varian introduced her to, but her dream was to become an actress. “I can remember my aunt Denise really noting that I loved to cook and bake. And she would say to me, ‘Are you sure this isn’t what you should pursue? You love to do this.’ But I always saw it more as something I could do at home.”

Olsen studied acting, journalism, and nonprofit management in college. After graduating, she married, and her husband (whom she later divorced) took a teaching position in Germany. They spent a year in the small, rural town of Meinerzhagen. But Olsen didn’t speak any German. “It was intimidating. I knew I needed to learn the language.” She decided that a project of her own would force her to interact with the locals, and baking was something she was good at. She started by selling American baked goods at the local farmers’ market, and they were a hit. Through her business, which she called Backerei Auf Dem Huegel (Bakery on the Hill), she introduced the locals to popular American pastries such as cream puffs, brownies, muffins, and pies.

When she relocated to Santa Fe at the end of February, Olsen thought that Coquette would be more of a side business. She had a series of interviews at local nonprofit arts organizations lined up. “Then the pandemic hit, and everyone ceased hiring. So I decided that Coquette had to be my primary focus.”

Olsen knew the town. She lived in Santa Fe before her nine-month jaunt in Montauk. “I definitely have the boomerang effect when it comes to Santa Fe,” she says. “I’ve left several times and I always come back. It was about six months before I left New York when I would just close my eyes and think about what place really felt like home to me. It was always Santa Fe.”

Olsen has no brick-and-mortar location of her own. She bakes her mason jar cakes at Canyon Vista Cooking, a community kitchen on Rufina Circle, and sells them through her website (coquettecakes.com). Olsen expanded her menu beyond just strawberry shortcake: other offerings include a New York-style cherry cheesecake, coconut cake with lemon curd filling and coconut frosting, a devil’s food chocolate cake with buttercream frosting and fresh raspberries, and a mouthwatering apple crisp baked with Honeycrisp apples, oats, cinnamon, and brown sugar, and layered with homemade whipped cream. It’s a gooey treat, served warm, and the whipped cream melts into the filling, giving the taster that perfect balance of warm and cool, tangy and sweet.

Most of the ingredients are locally and regionally sourced: Navajo Pride Flour; strawberries and raspberries come from Heidi’s Raspberry Farm; and De Smet Dairy at Bosque Farms supplies her with eggs and other dairy products.

“The rewarding part of this, apart from the enthusiasm of the customers, is local partnerships. I use as many local ingredients as I can.”

Four of the cakes she makes are from her grandmother’s recipes, including what she calls a sunshine cake, which is an angel food cake with lemon glaze and raspberry Bavarian cream.

“It’s a lot of work because it’s not just the baking. It’s the taking of orders and all the marketing and promotion,” she says. “But it’s a labor of love. I enjoy baking. It’s quite solitary. It’s almost meditative for me. The other side of what I do are custom wedding cakes and cakes for special events. That market’s taken a huge hit because of the pandemic. Next summer, that might pick up a little bit.”

Soon, she’ll be selling her products at La Montañita Co-op Food Market (913 W. Alameda St., 505-984-2852, lamontanita.coop) and Chomp (505 Cerrillos Road, Suite B101, 505-660-5146). She’s in talks with the regional director of Whole Foods about stocking her cakes in its two Albuquerque stores, the Santa Fe store, and at a location in El Paso. “Whole Foods has an incentive to carry local food items because they have to meet a certain quota” of local purveyors, she says. The cakes are available for delivery through Grubhub (grubhub.com) within a 25-mile radius of Santa Fe.

“What, I’d really like to do is a food truck,” she says. “There’s a guy in Salt Lake City who takes double-decker buses and converts them. It’s kind of perfect because you have a whole second level that can just be upper seating. How fun would it be to pull into the Plaza in a double-decker bus?” ◀