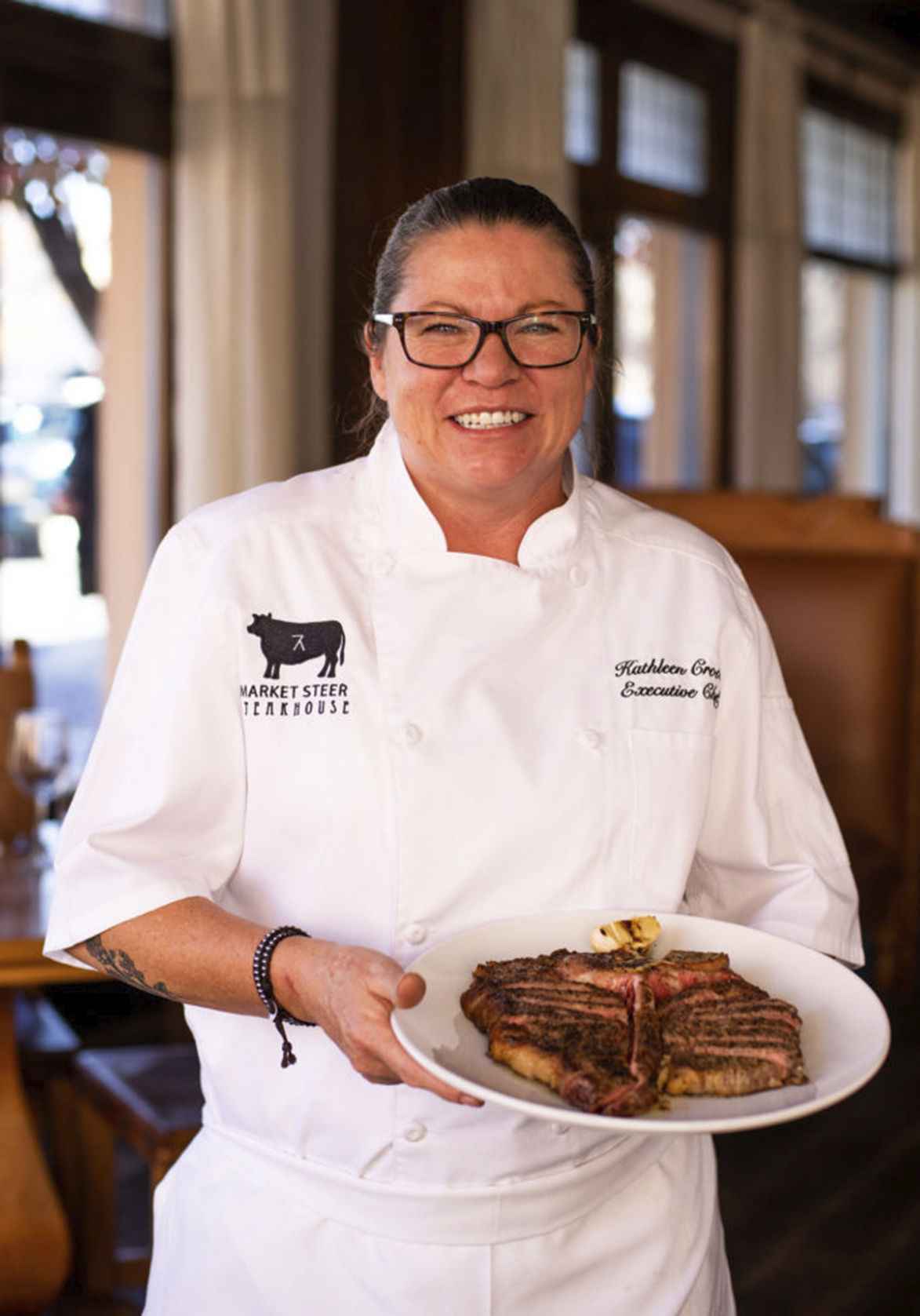 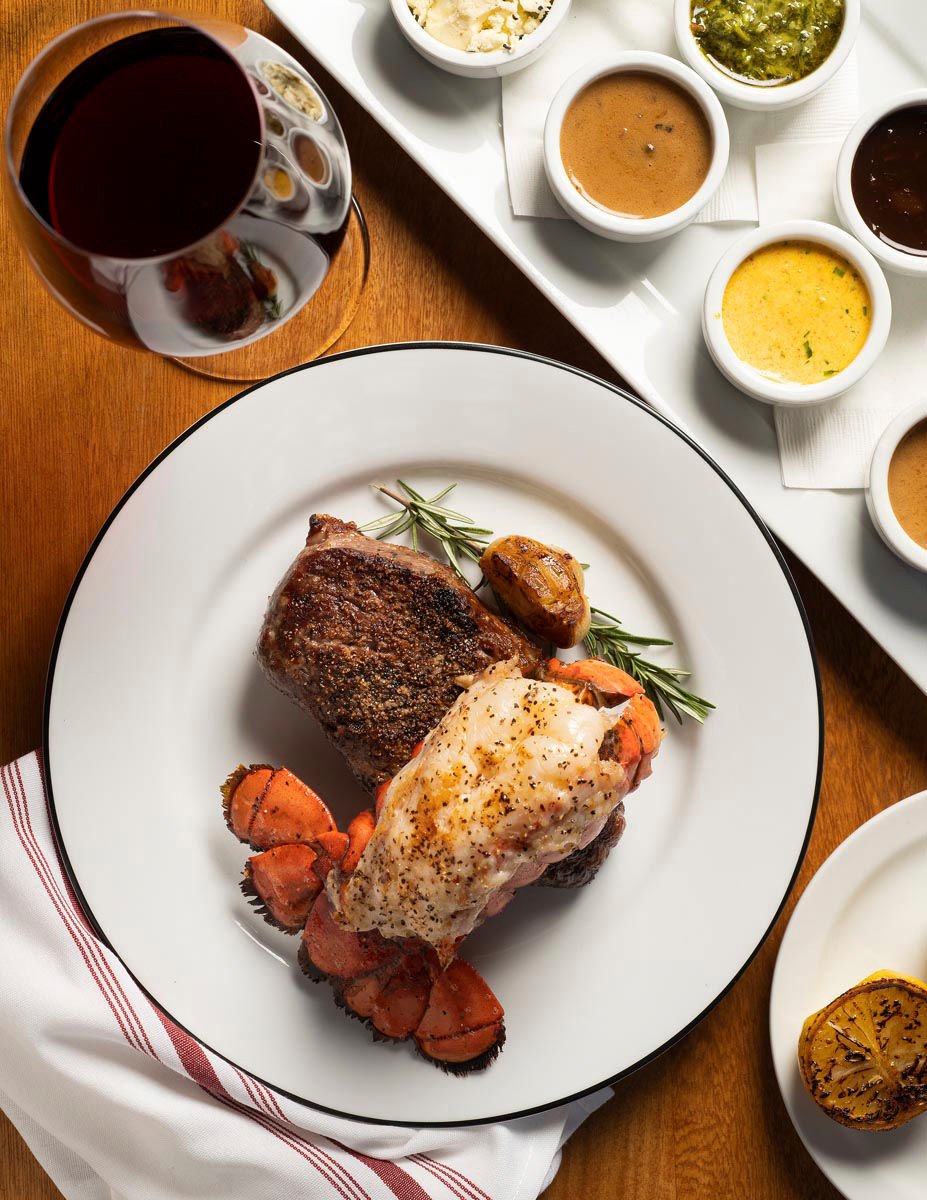 The Prime New York Strip with lobster tail and a sauce flight in the background, photo Douglas Merriam 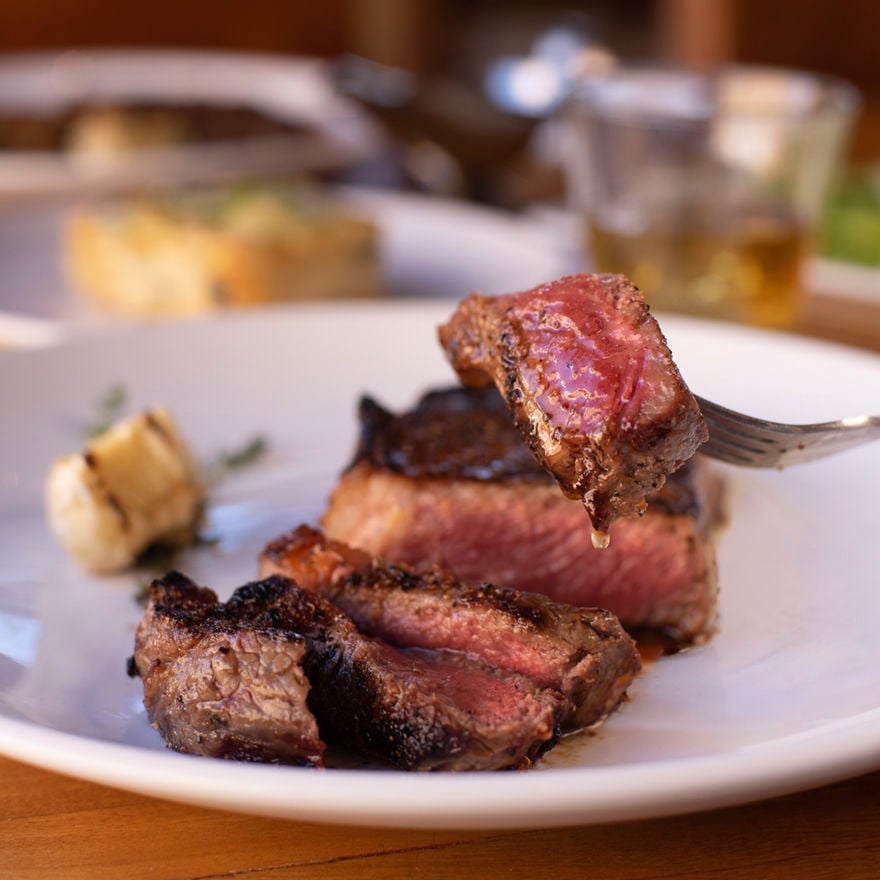 The Prime New York Strip with lobster tail and a sauce flight in the background, photo Douglas Merriam

Take the onion rings, which come stacked on a branding iron. They have to be perfectly golden and crispy, or she won’t serve them.

“They’re a labor of love,” she says of her preparation of the often lowly side dish. “It takes three people, very focused, to make them. There’s a process. [The onion slice] goes through an egg wash, flour, an egg wash, flour, and finally into the panko. If you put your wet gloves in the dry [flour], it gets clumpy, and then your onion rings get soggy. Sometimes I have to throw away two trays of onion rings and start over.”

Located downtown in the historic Hotel St. Francis, a Heritage Hotel and Resort, Market Steer is a classic American steakhouse in the fine-dining tradition, but a little more modern and less stuffy, Crook says. The menu features important staples like a wedge salad (with bacon and blue cheese), Boursin creamed spinach, and lobster tail, as well as nods to New Mexico, like green chile risotto, and other hints of heat hidden here and there, which Crook says are an inescapable influence of her New Mexico roots. And, of course, there are steaks. Among the options are a 14-ounce New York strip, a 20-ounce rib eye, and a 24-ounce porterhouse.

They opened in August 2018, with Market Steer manning the kitchen and the hotel in charge of the bar. Crook and her partner, general manager Kristina Goode, spent the year before operating a rustic American food truck in Artesia, New Mexico, where Crook grew up. For the first seven weeks of the shutdown, that experience gave Crook and Goode the tools for implementing curbside delivery from Market Steer.

“It was hard for us because we let go all [23] of our employees, and it was just me and Kristina,” Crook says. “We went from [making] about 125 meals a night to 10, but it was just the two of us setting up the kitchen, cleaning, doing all the dishes, all the trash, all the ordering. I gotta nod to my food truck and people who can do that every day. We learned so much of what we could and couldn’t do, and I think it made us very successful.”

For curbside service, Crook limited the Market Steer menu and focused on dishes that travel well. For instance, she nixed the green chile mac and cheese, since so many people were making pasta at home, and added a cheesy baked potato because it holds heat well and its pleasures are not diminished if it gets a little soggy in a to-go container. She knows it’s impossible to perfectly replicate the experience of eating in a restaurant when you take the food home, but she wanted to get as close as she could. After almost two months, however, Crook and Goode started getting a little burnt out from running the entire show by themselves. In May, a few weeks before the governor announced that restaurant patios could reopen with limited-capacity seating, they decided to take a break.

“We decided to take a step back, go home, and take care of us. When the governor says ‘go,’ I want to make sure that I’m educated on all the new things that are coming up and that my staff is ready.”

Given the current sensitivity about animal-based diets, a steakhouse might seem a little old-fashioned, but Crook says beef remains a staple of the American diet. “Some of that mentality from the olden days still holds true.” She makes sure, however, that vegetarians always have something interesting to eat at Market Steer. “I don’t ever want a vegetarian to come out and say they were served a boring plate of sautéed vegetables. Before the shutdown, we were doing a whole head of cauliflower with curry and some different spices.”

Crook, 43, was raised on a working farm and ranch. There was always red meat on the table at breakfast, lunch, and dinner. “We grew everything from the beef and the pork and the chicken that we ate to the vegetables that we had,” she says.

“I went to college on a rodeo scholarship at Tarleton State in Stephenville, Texas. I had a great time training horses, and then I was home working on my mom’s ranch. March came, and so did the winds,” she says. For reasons she doesn’t fully explain, it was returning to Artesia in 1997 and remembering just how windy it gets in Southeastern New Mexico that led her to change her life.

“I forgot how much you could actually see the dirt blowing through the house. That night, I was up late, stewing around, and I decided to go to culinary school. I told my mom in the morning, and she was like, ‘What?’ ”

Despite never having shown much interest in cooking, Crook was attending classes at Le Cordon Bleu College of Culinary Arts the following month. By 2003, she was working in restaurants in Dallas, which is where she met Goode. Crook worked her way up by impressing head chefs in kitchens throughout the city. “You can throw a rock at any corner in Dallas and hit a restaurant with a great chef,” she says. She laughs off the question about what it was like to rise through the ranks in a famously male-dominated profession.

“You stand your own. I had line cooks when I first started that were just terrible. They would talk so much trash. And that’s a kitchen thing; it’s going to happen. I had some male chefs that were awful as well. You learn to look them in the eye and basically tell them you’re not going to take their [expletive]. Sorry to be blunt like that, but I think that’s what you have to do. It’s a hardworking career. You get in there and you sweat and you work as hard as any man, and you’ll earn their respect.”

Crook and Goode moved to Aspen, Colorado, in 2010, to run Steakhouse No. 316. There, Crook attracted national recognition from bestchefsamerica.com and was featured on Cooking Channel’s Chuck’s Eat the Street. Another short stint in Dallas was followed by a year with a food truck, which afforded them the flexibility to travel in search of the ideal location for their own restaurant.

“We knew we wanted to be in New Mexico. Santa Fe kept coming up. We’d come up on the weekends, eat at different restaurants,” Crook says. “Kristina thinks I’m nuts, but I would talk to all the tourists on the street and ask them where they were going to dinner and why they picked that place. If there was one thing that they thought Santa Fe was missing, what was it? A good steakhouse kept coming up. Texans and people from back East, they can’t handle the chile like we can.”

In preparation for reopening, they removed half the tables from the dining room and revised table-setting and sanitation procedures. They were able to bring back about 95 percent of the staff, says Goode, 38, who has worked in hospitality for 27 years. Social distancing is still in place, but Crook and Goode want a steak dinner to feel celebratory. The festive atmosphere of special-occasion dining is why they opened their own restaurant in the first place.

Serving in two outdoor spaces and at half-capacity inside, Goode says they should make it through the summer. If they aren’t allowed to fill the dining room after patio season ends, they might have to reassess. As much as is possible, they aren’t thinking that far ahead.

“But we’re hopeful,” Goode says optimistically. “As everyone is. As we have to be." ◀

My wife and I ate here once prior to the pandemic and the meal was outstanding. This is a very talented chef, I highly recommend the restaurant. The steak was outstanding, we also had the mussels which were off the charts.

Market Steer Steakhouse is a great place for steak. I intend to NEVER so-called meat from plants. I intent to ALWAYS eat meat from animals!!!!