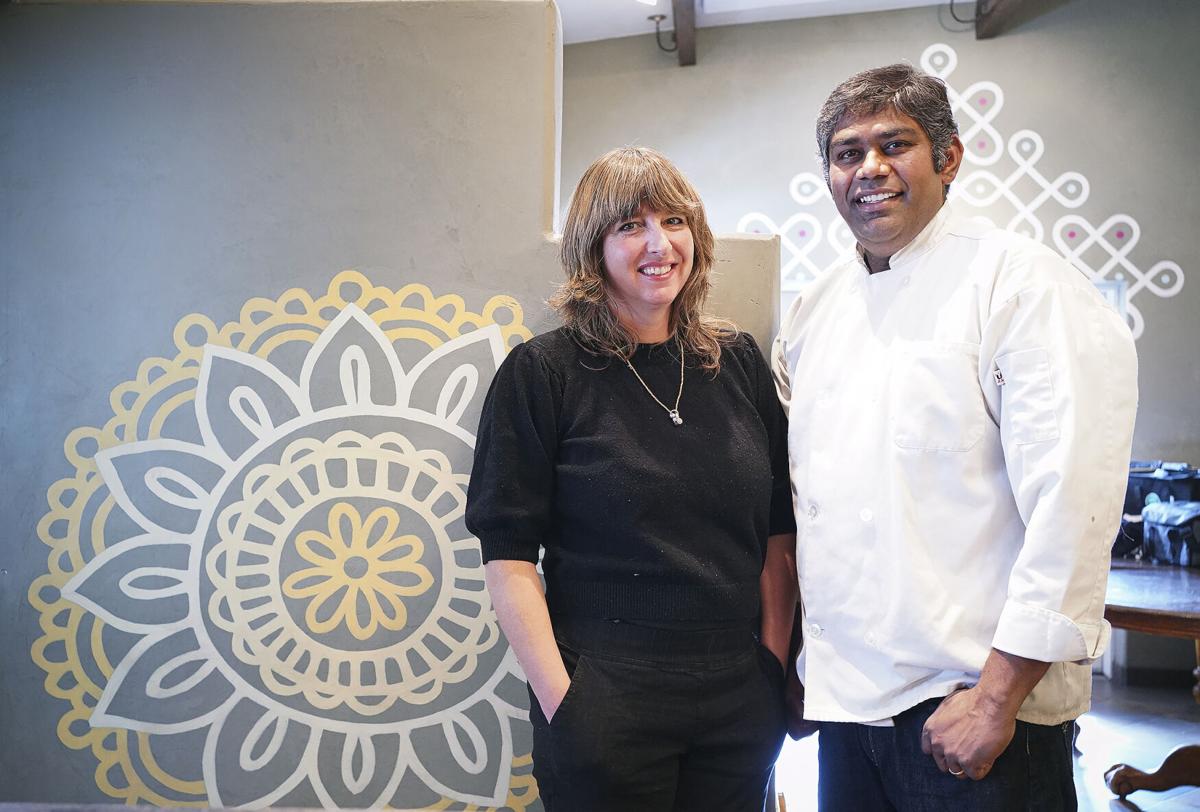 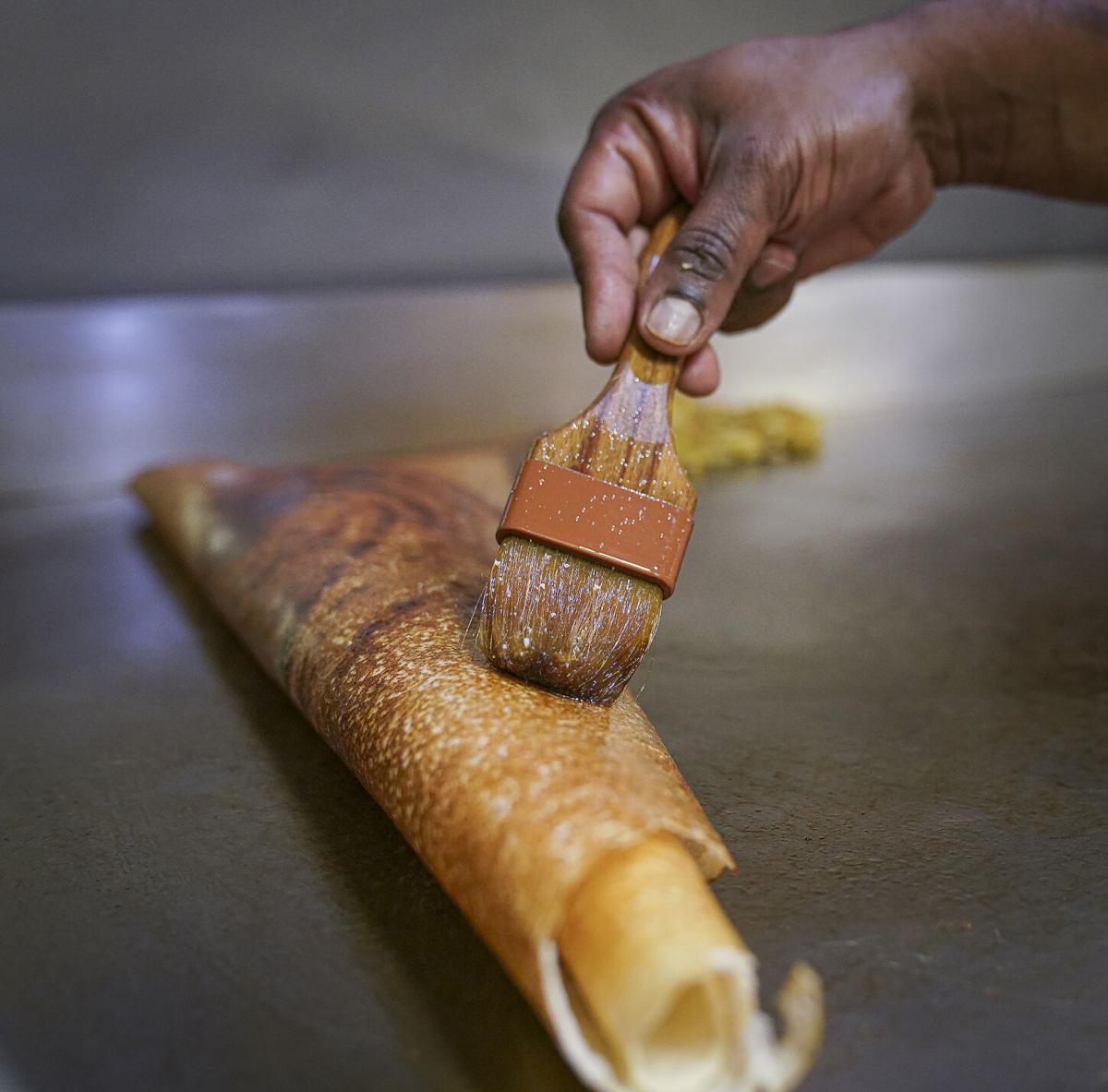 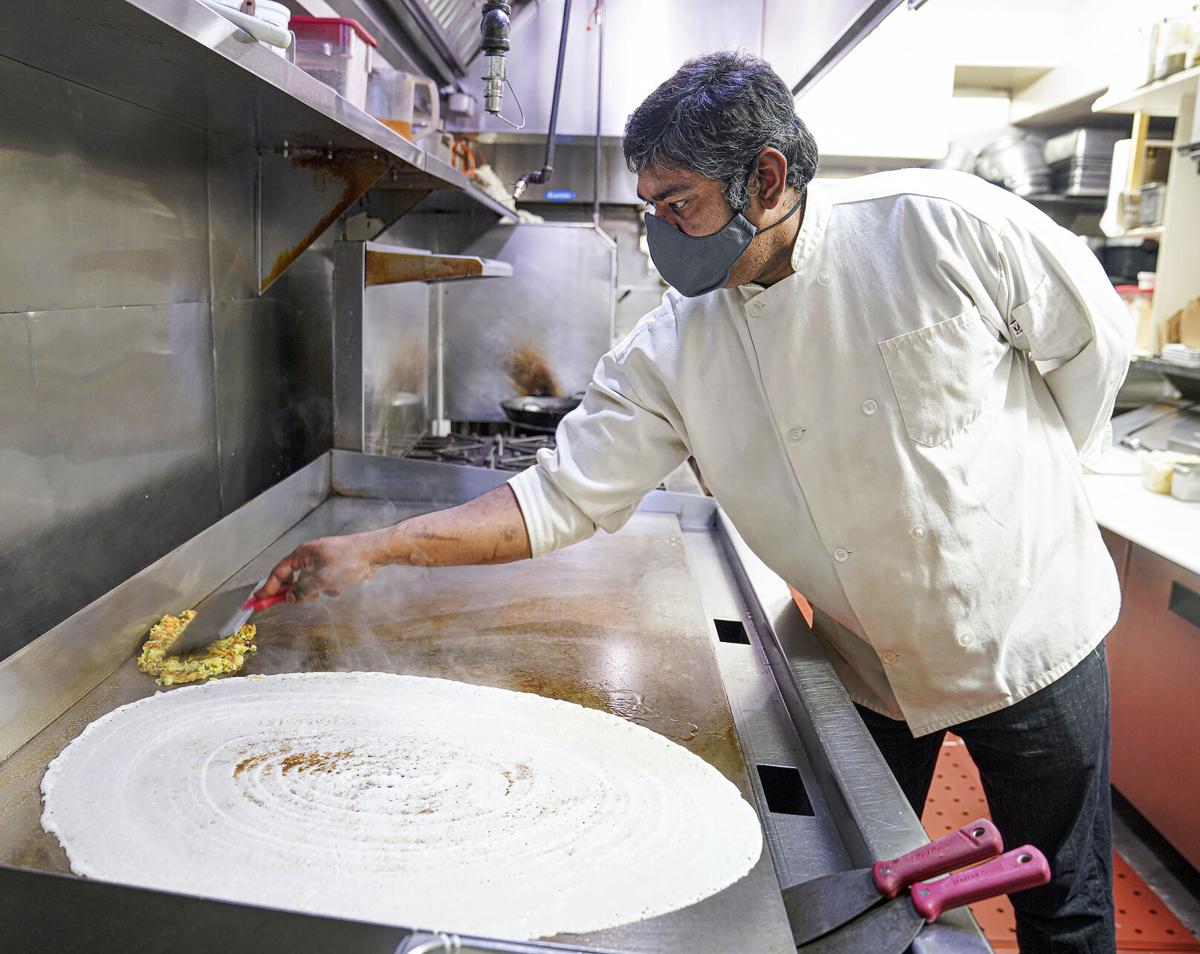 Chef Karuppasamy makes a paper dosa with masala on the side at Paper Dosa, photo Gabriela Campos/The New Mexican

Chef Karuppasamy makes a paper dosa with masala on the side at Paper Dosa, photo Gabriela Campos/The New Mexican

The dosa is to South Indian cuisine what the crêpe is to French food or the tortilla to Mexican fare. It’s flat, fast, and completely versatile for wraps and as an alternative to bread. The dosa also happens to be the namesake of Santa Fe’s Paper Dosa.

The restaurant, now in its sixth year, began offering take-home dosa kits in September as a way to offer customers something different and to diversify revenue when the future of dine-in eating is in question. The kits include ready-to-cook batter for 6 to 8 dosas, each of which takes just minutes to make. The restaurant also sells add-ons such as chutneys and curry sauces. Like crêpes, the dosas are infinitely variable. They can be used for burritos, quesadillas, pancakes, or with masala.

“We cook dosa all the time at home, and we make a lot of really good things with it,” says Nellie Tischler, co-owner of Paper Dosa alongside her husband, chef Paulraj Karuppasamy. “If people can start getting more confident about making dosas at home, I think it could really take off, especially because it’s gluten-free.” (There are plenty of instructional videos online, including a few on Paper Dosa’s website. Alternatively, the vice president-elect, Kamala Harris, and actor Mindy Kaling (The Office) went viral last year with a dosa cooking video.)

Dosas were also the starring dish in the San Francisco restaurant where Karuppasamy, 42, reconnected with his roots in South India. He moved to San Francisco after culinary school and working as a chef on a cruise liner, and worked as a sous chef before a friend recruited him to work at Dosa as executive chef. The restaurant, with locations in trendy parts of City by the Bay, first opened in 2006. It was something of a phenomenon and elevated the dosa in the American palate.

San Francisco’s Dosa also raised awareness of South Indian food, which is distinct from the northern Indian food to which Americans are most accustomed. “Our ingredients are different. We work with more nut milks and fresh produce and rice and lentils,” Tischler says. “Northern is more cream- and wheat-based.”

Although Karuppasamy grew up with South Indian food, he was trained in Continental cuisine. “I never cooked South Indian food before. I have done some dishes in my culinary school, but the school was mostly about housekeeping and food production,” Karuppasamy says. He picked up a lot from his work at Dosa and then called his family for the rest. “Some dishes, like rasam, I check with my mom, and she has a recipe. Every household has their own kind of rasam.” The spicy broth is an appetizer at Paper Dosa and just one example of their homestyle influence. They also serve pakora, pappadums, and a lentil fritter called dahi vada.

Karuppasamy makes a point of continuously educating himself and the restaurant’s staff. After a hiccup in the supply chain, Paper Dosa had to revise its plans for obtaining yogurt. Karuppasamy taught himself to make it in-house. “We are making the yogurt now. It’s not a big deal,” Karuppasamy says. He says he finds the time to further hone his cooking skills almost every night.

It’s not a coincidence that Paper Dosa specializes in street food and homestyle cooking. The restaurant began as a pop-up concept, and Karuppasamy had doubts that they would be able to open a brick-and-mortar establishment. “It was kind of impossible to me,” he says. Support from the community and their popularity suggested that it wasn’t.

Tischler and Karuppasamy met and fell in love in San Francisco and then moved to India for a year. Tischler was forced to head back to Santa Fe, where she was raised, and Karuppasamy followed sometime later. “To be honest, I didn’t know anything about Santa Fe,” Karuppasamy says. He was also hesitant to move away from San Francisco.

The pop-up, though, did well enough to merit its location on Cordova Road. Tischler and Karuppasamy took the cues from their menu both from Karuppasamy’s family and their success at Dosa in San Francisco, but there were some challenges to setting up the restaurant in the Southwest.

“When we first opened Paper Dosa, we based the menu on what Paul cooked in San Francisco. It was a whole different story getting produce there,” Tischler says. “Because we’re a South Indian restaurant, we have to source from so many vendors. It’s a huge challenge to serve a tropical cuisine in the desert.” They source a lot of their ingredients from Bombay Spice in Albuquerque. They also rely on the farmers’ market for their salads and curries, and on Romero’s Farm for a lot of their produce.

South Indian food is all about the spice, and for that, Tischler and Karuppasamy have to go a little farther than Albuquerque. “All of our spices we get in India. We have family in India who send us most of the spices that we need,” Tischler says.

They source their rice flour from California: It’s the basis for their dosa batter. Making the batter is a delicate, time-consuming process and one of the keys to a great dosa. That’s the real value in Paper Dosa’s take-home kit.

Paper Dosa also offers its entire menu to go, save the calamari and the Bombay sliders. They also offer delivery service. Their to-go businesses have allowed the restaurant to keep much of its staff, but running a restaurant is always a difficult endeavor. “When you open up a restaurant, you can’t just stop. It’s like having a kid. You have to be on top of everything,” Tischler says. “The only way you’re going to succeed is if you take every day as a new day and approach it with lots of humility.” ◀

One of our favorite restaurants in Santa Fe. The food is always delicious and consistently so. I really appreciate how involved they are in the community here (participating in the Souper Bowl, buying their produce locally).

This is one of the best restaurants in Santa Fe. The food (even take-out) is always consistent, on time (take-out) and hot in temperature. The sauces are divine and taste like I remember in India. It began a bit "hotter", but I guess they had to go with the tastes of the Southwest. I am a big fan!! Barbara Arlen

Glad to hear they aren't so "hot" now -- as all the dosa I've ever had, from South India and Singapore to Alberta and San Antonio, had one reliable mild chutney, coconut. The Paper Dosa's actual dosa are superb, but the chutney was inedible so I've never gone back. Still wish they had an actual mild variant like those I always had in India, but I'll give it another try.