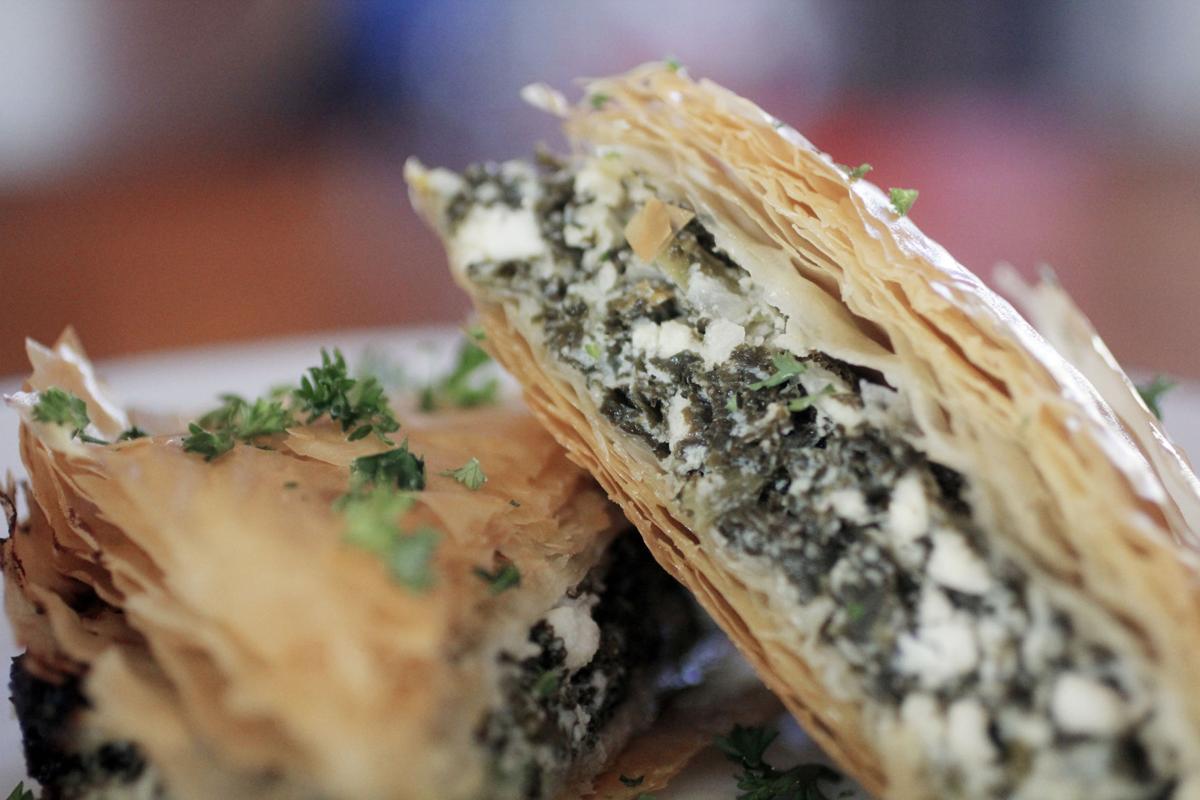 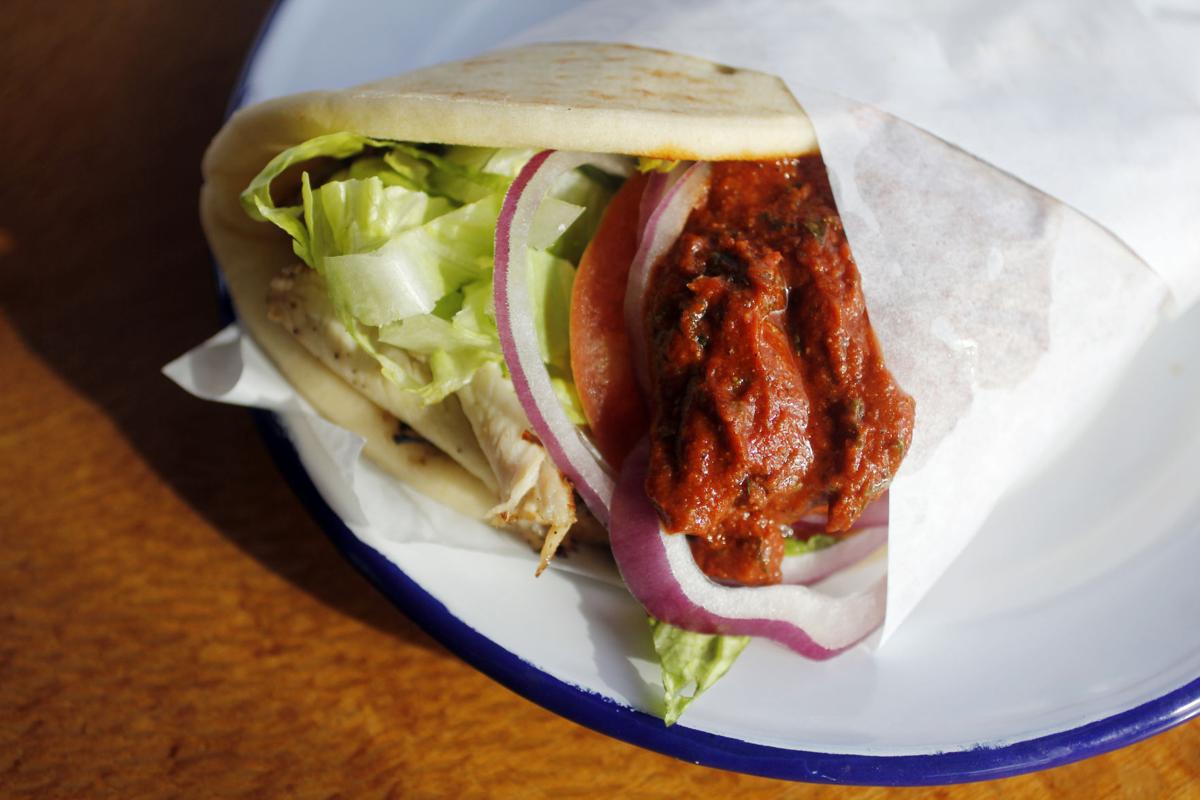 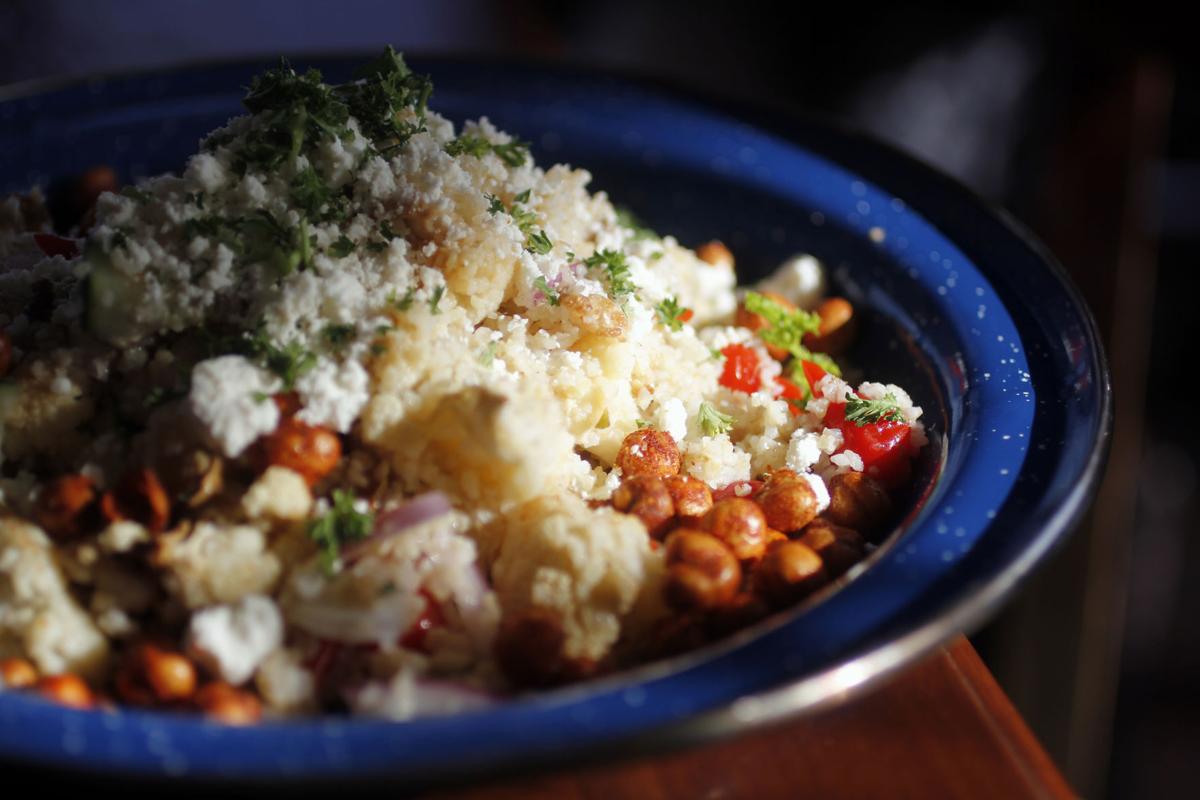 Noise level: bustling during the day, quiet at night

Falafel, hummus, spanakopita: When it comes to food, I certainly agree with Gus, the Windex-wielding father of the 2002 rom-com My Big Fat Greek Wedding: “There are two kinds of people: Greeks … and everybody else who wish they was Greek.”

Once you’ve had a meal or two at Yamas — the new Greek rotisserie tucked between the Lamplighter Inn and India House on Cerrillos Road — it’s easy to imagine an uncle or grandmother behind the scenes in the kitchen — the kind who’d insist on making you something to eat even though you’ve just declared that you’re not hungry. That assumption of family involvement isn’t so far-fetched, since Yamas is the latest in the empire of the Razatos family, who helm the beloved historic Plaza Café, its Southside sister, and the relative newcomer in the Railyard, Café Sonder. At Yamas, the family lets its Greek flag fly, so to speak, allowing its culinary heritage to occupy an entire menu rather than showing up here and there, as stray dishes do on the menus elsewhere.

Daytime can be bustling, the charmingly decorated space — a no-frills window-ringed box — delightfully sunny. Dinnertimes seem more sparsely populated, particularly given the still-short days and recent sub-freezing temperatures. There’s nothing frosty about the service, however: Everyone seems cheerful and enthusiastic. During the deep blue of a winter’s night, the brightly lit room does take on a fishbowl effect, and you might feel like you’re dining on display.

Employees are also poised to patiently answer your questions about unfamiliar items on the menu, which is short on definitions and descriptions. You might wonder, for example, about the “savory cheese pie” ($6), which turns out to be a kale-based cousin of spanakopita (the famous spinach, phyllo, and feta pie); it seems to differ only in that the greens are stewier, more deeply flavored, and darker in hue. In triangles of both this and the house spanakopita ($6), the phyllo is parchment-thin and toasty golden, the cheese tangy and wonderfully salty. Why the menu includes two very similar dishes is unclear, but you won’t hear me complain. I’ll gladly eat both.

You might also wonder about taramasalata ($5), typically a roe-based pureed meze, which here leans heavily on its starchy element — potatoes — and is made with fish oil. Served in a glistening pinkish-mauve scoop as a side and part of the sampler plate, it has a slick consistency and a slight tang; it vaguely resembled another spud-heavy dish, skordalia (not offered at Yamas), and made me wonder about a possible hybrid of the two.

There’s also avgolemono ($5) — a traditional Mediterranean soup made with chicken, rice, lemon, and egg that brings to mind words more often associated with fashion than food, like “silken” and “velvety.” This is basically the souped-up chicken-and-rice soup of your dreams — deeply warming, with chicken’s savory qualities, traces of citrus tang, and a comforting custard-like consistency.

The menu would do well to briefly describe the mysteriously named “juicy potatoes” ($5), which are cooked in the fat of the roasting chickens. (The meat-averse should be informed, lest some shy vegetarian order them unwittingly.) What arrived on our plate wasn’t what I’d call juicy — no real liquid in sight — but they are dreamy, ideally browned, with tender centers and crisp edges.

Were I not to describe them here, you’d likely wonder about the difference between the zucchini fritters ($7) — darkly fried yet somehow mushy and undercooked in the center — and the fried zucchinis ($6), which are lightly battered and impeccably fried batons of their namesake veg. These are best eaten hot and don’t stand up to time spent languishing on the plate, but honestly, there’s not much chance of that.

If you have decision-making difficulties — due to hunger pangs, say, and the light-headed fog of plummeting blood sugar — point to the sampler plate ($15) and let the kitchen do the rest. This is an excellent introduction to the food at Yamas, with a sprightly Greek salad, two lightly briny dolmas tucked amid the leaves, a generous dollop of quite-garlicky yogurt, the aforementioned taramasalata, scoops of two kinds of hummus, and triangles of pita — here it’s the pillowy, not the pockety, kind.

Those puffy pitas are used for sandwiches, swaddling gyro meat ($7.50), chicken, lamb, pork, beef, or slightly dry but delightfully seasoned disks of falafel ($7) with impressively ripe tomato, mild raw onion, and crisp shredded lettuce. The savory sauce tzatziki, of course, is de rigueur, and Yamas goes the extra mile by offering three varieties (two of which are yogurt-based, per convention). Choices include plain, spicy (roasted jalapeño is part of the mix), and an iconoclastic zingy red made with tomato, cumin, paprika, cayenne pepper, garlic, cilantro, parsley, and olive oil. It’s my new favorite condiment in town.

Larger plates include moussaka ($12.50) — a casserole of sorts wherein aromatic eggplant and ground meat (here beef and lamb, heady with winter spices) are topped with a significant stratum of bronzed bechamel. The restaurant’s namesake rotisserie chicken, offered in halves and quarters ($13.50 and $9.50), is fall-off-the-bone tender and juicy, particularly if you request dark meat. Choosing any of the larger plates allows you to select two sides from the restaurant’s rather lengthy list.

Frankly, you could easily compose a nutritious meal out of sides alone, and Yamas is the sort of restaurant where, if you choose wisely, you can leave feeling simultaneously stuffed and saintlike. That seems fitting, since its friendly name means “to your health” — the Greek equivalent of the Irish sláinte, the German prost, the Spanish salud, or our somewhat more generic “cheers.”

The menu offers a handful of salads, including trendy kale ($7.50 and $12.90) — mixed with its similarly hip cousin quinoa, as well as olives, almonds, red pepper, and feta. The dish includes a compelling heap of perfectly al dente orzo ($7.50 and $12.50) that’s given a tabouleh-like treatment, tossed with cucumber, tomato, red onion, olives, capers, and feta in a sprightly red-wine-vinegar-based dressing. The bulgur-cauliflower salad ($7.50 and $12.90) sounds spartan, but it’s an enjoyably wholesome delight accented with sweet peppers, red onion, walnuts, feta, parsley, cucumber, and crunchy fried garbanzo beans — another uncommon element that’ll keep me coming back for more.

With so much going on in that sampler plate, it was hard to tell whether the house Greek salad was bare or remarkably lightly dressed — and I mean that as a compliment. The menu mentions a red-wine vinaigrette, but tumbled with uber-salty capers, feta, red onion, and olives, the fresh crunchy greens, tomato, and cucumber hardly need embellishment.

The scoops of the unique green hummus (actually less green and more flecked with parsley) and the redundant-sounding “bean hummus” are homey, rough, and less blended than you’ll find elsewhere. Depending on how opinionated your dining companions are, these dishes may spark debates. Are they unlike the hummus made in another restaurant’s kitchen? A traditional family version? Or even food someone actually ate in Greece?

Vats of ink — actual and virtual — have been spilled addressing the topic of authenticity, but the paterfamilias of the Razatos family came to the United States from the island of Kefalonia in the 1920s, and the family has been feeding Santa Feans ever since, so it’s hard to argue about this food’s provenance. Some of the dishes may not resemble the renderings you’ve had before or might not be what you expected, but you’ll have a hard time convincing anyone that most of them aren’t delicious. ◀