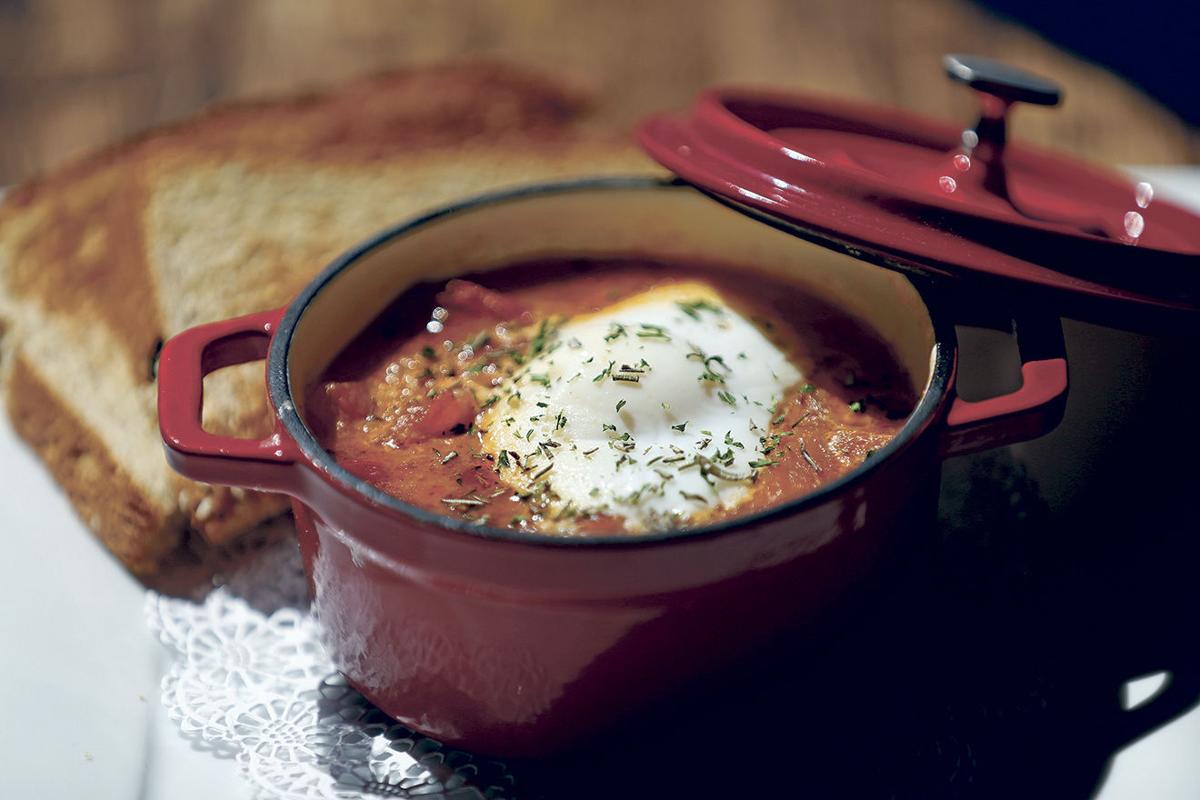 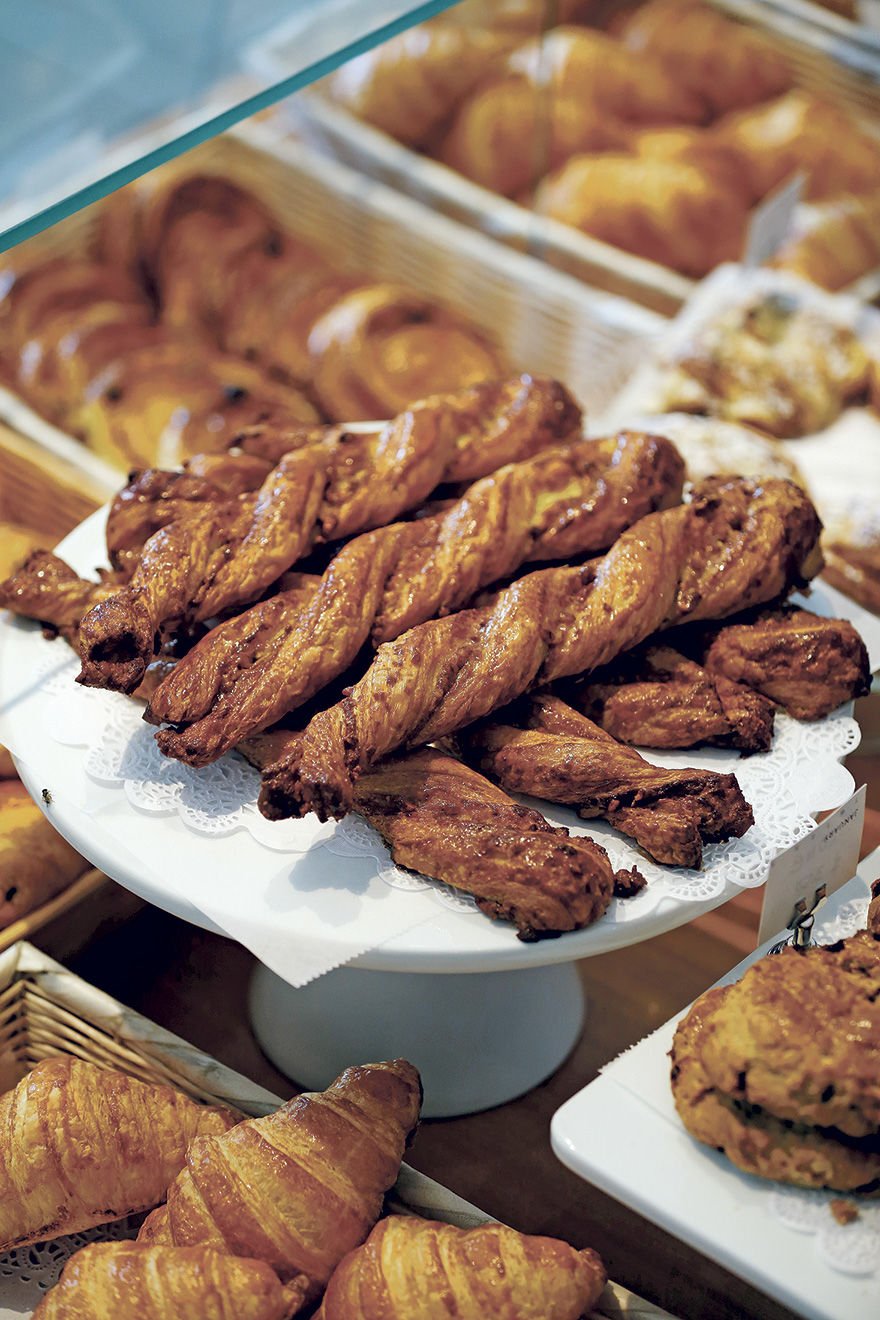 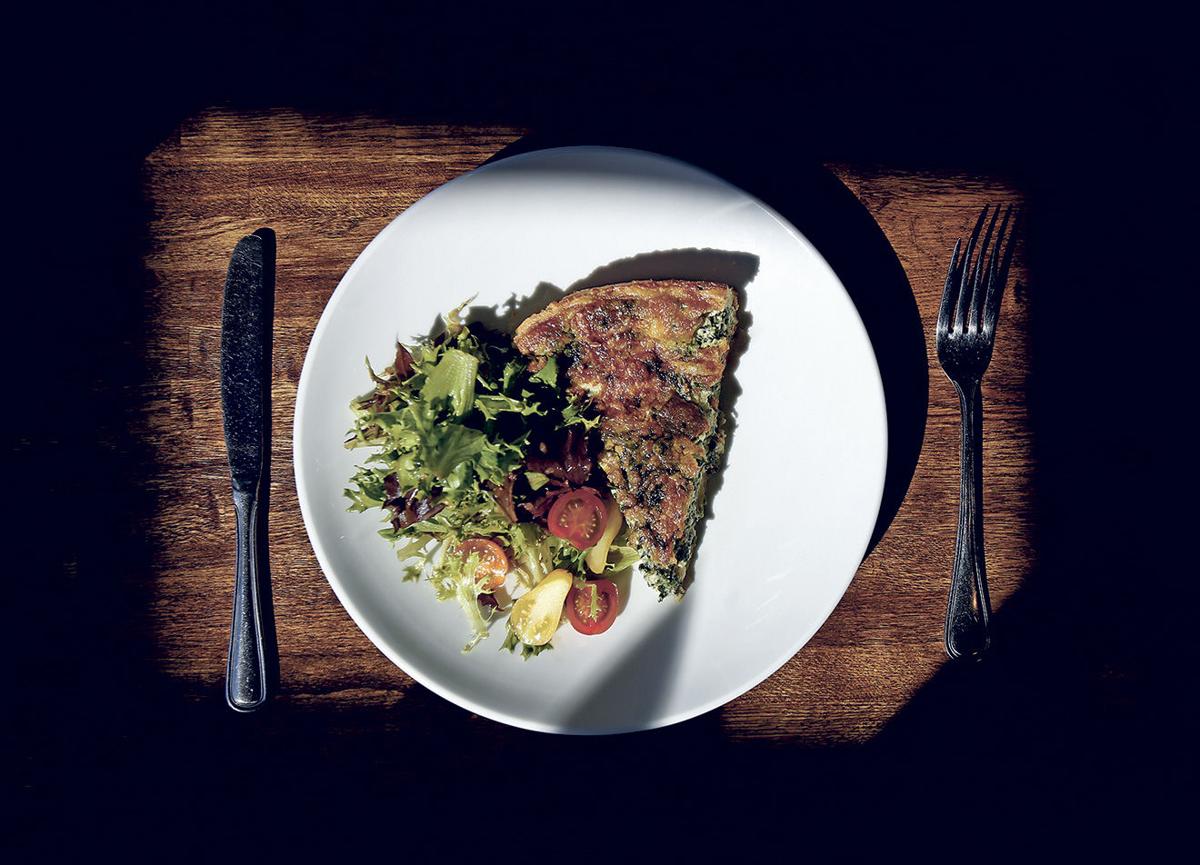 If you’re on Cerrillos Road, or especially one of its many little western side streets, you’re probably there for tacos, ice cream, an oil change, or to pick up some new business cards — not French food or pastries. Chef Eric De Margerie, a native Parisian who arrived in Santa Fe by way of Los Angeles, wants to change that with Madame Matisse, a petite café in a small, boxy space where Revolution Bakery and the recently departed Bodega Prime got their start.

If you visit Madame Matisse early enough in the day, you’ll quickly be captivated by the pastry counter, where an array of goodies, from croissants to Danishes, sits behind glass like glistening oversized jewels. Later in the day, as the pastry population dwindles, your eye might turn to the colorful art on the walls and the hand-painted murals, which mimic the recognizable style of Madame Matisse’s famous mari, the artist Henri.

These murals — not to mention the signage out front, which replicates the painter’s handwriting — might set off a lively debate at your table about copyright, the idea that imitation is the sincerest form of flattery, and whether a renowned early-20th-century artist’s name, writing, and works are in the public domain. If you happen to be enjoying a large cup of strong black coffee and tapping your feet to the jazzy Django Reinhardt-esque soundtrack, you might feel a little like you’re in an Americanized light-industrial version of an old-time Parisian café. All that’s missing are the Gauloises.

Everything we sampled from the pastry case was practically perfect — from the intensely buttery and flaky croissant ($2.50) to a honey-sweet and nut-studded cinnamon twist ($3.50) and a soft, tender Danish ($3.50) with an apricot-stuffed center. Even little bags of butter cookies proved rich enough to merit what initially seemed a steep price tag ($7 for 10 cookies). We took home a bag of the chocolate ones — bracingly bittersweet, not cloying — to dunk in an afternoon café au lait — and we discovered the vanilla versions are mildly sweet and buttery enough to add to a cheese plate when wine o’clock rolls around.

The menu at Madame Matisse does not include wine or any other alcohol, but there’s certainly coffee ($2.75), a rich and dark brew reportedly from my beloved Aroma Coffee that’s also offered in the form of cappuccinos, macchiatos, and mochas. Over lunch you might prefer timeless iced tea or perhaps something more whimsical, like the sweet, floral, and highly Instagrammable purple potion made with uber-trendy butterfly pea flower and lemongrass ($4.25).

Naturally, the menu includes French classics like quiche Lorraine and Croque Madame. There are omelets — including the Florentine ($10.50), generously flecked with chopped spinach and filled with mushrooms and just the right amount of Swiss cheese — and even nods to New Mexico, like huevos rancheros and a “morning wrap” that anywhere else would surely be called a breakfast burrito. Kids, Francophiles, and folks with a sweet tooth might opt to start the day with a Nutella crêpe ($8.50). Early on a Saturday morn, it brought smiles to our faces with the addition of whipped-cream florets and a chocolate-syrup drizzle, although the crêpe itself was a bit tough and a touch too sweet (it’s hard to imagine it with a savory filling, although Madame Matisse does not currently offer these). A side of salty, evenly cooked bacon ($3) is an excellent savory palate balancer for the Nutella, and while the dainty square of gratin potatoes alongside your omelet might appear meager, it’s a labor- and flavor-intensive dish heady with herbed cream. Though you may not be able to eat it all, you will almost certainly want to.

For lunch, the menu suggests several sandwiches, both American and French, as well as salads and quiches. Salads vary in degree of complexity: there’s a small collection of mixed greens with a gloriously light dressing that can accompany a sandwich or quiche; a few plates loaded with the likes of smoked salmon or goat cheese; a nod to the Land of Enchantment, with avocado, corn, jicama, and chipotle dressing; and an “Oriental” chicken salad, whose odd retro name sounds like something your great-grandfather might’ve given it. The jaw-defying double-decker club sandwich ($11.95) is made with oddly pedestrian white bread, and the sometimes-slippery components slide off on the way from the plate to your mouth. We enjoyed a generous slice of still-warm spinach-mushroom quiche ($10.50), impressively laden with veggies, pleasantly nutmeggy, and with a nearly flawless crust — buttery, flaky, tender, and not too thick or thin. The onion soup ($6.50) arrives roof-of-mouth-scaldingly hot, with a perfectly salty sea of soft russet caramelized onions beneath a mantel of thoroughly melted cheese and broth-soaked baguette.

In case you still subscribe to the paranoid 1980s notion that real men don’t eat quiche, perhaps you’ll be lucky enough to lunch on a day when the list of specials includes steak frites ($16.50), a platter of tender meat that’s generously sauced with bordelaise and more akin to a hearty stew than anything served in steakhouses on this side of the Seine. The frites are a thicker species, more closely related to chunky Belgian fries than the trim McDonald’s-esque specimens some Yanks may have come to expect.

You won’t see many tourists in this off-the-beaten-path space (for that try the satellite location at 105 E. Marcy St.), and the locals who frequent Madame Matisse probably prefer it that way. Management is clearly well attuned to the music’s volume, which could easily reverberate and escalate in a setting with its fair share of hard surfaces. Service is friendly, quick, attentive, and professional without being obsequious — if everyone weren’t so genuinely cheerful, you’d suspect them of currying favor. Early on a weekend morning, you might spot some sleepy-looking employees, but by midday, there’s a young woman looking rather glamorous, in a chic black-and-white ensemble and a classic red lipstick, and everyone’s generally hustling and bustling. In this spare space, ambience is lacking — this is a far cry from one of those stereotypical expensive, low-lit, romantic French places — but that’s OK. Breakfast, lunch, and weekend brunch don’t need to be Meow Wolf-level full-immersion experiences. And pastry tastes better without secondhand Gauloises smoke anyway. ◀