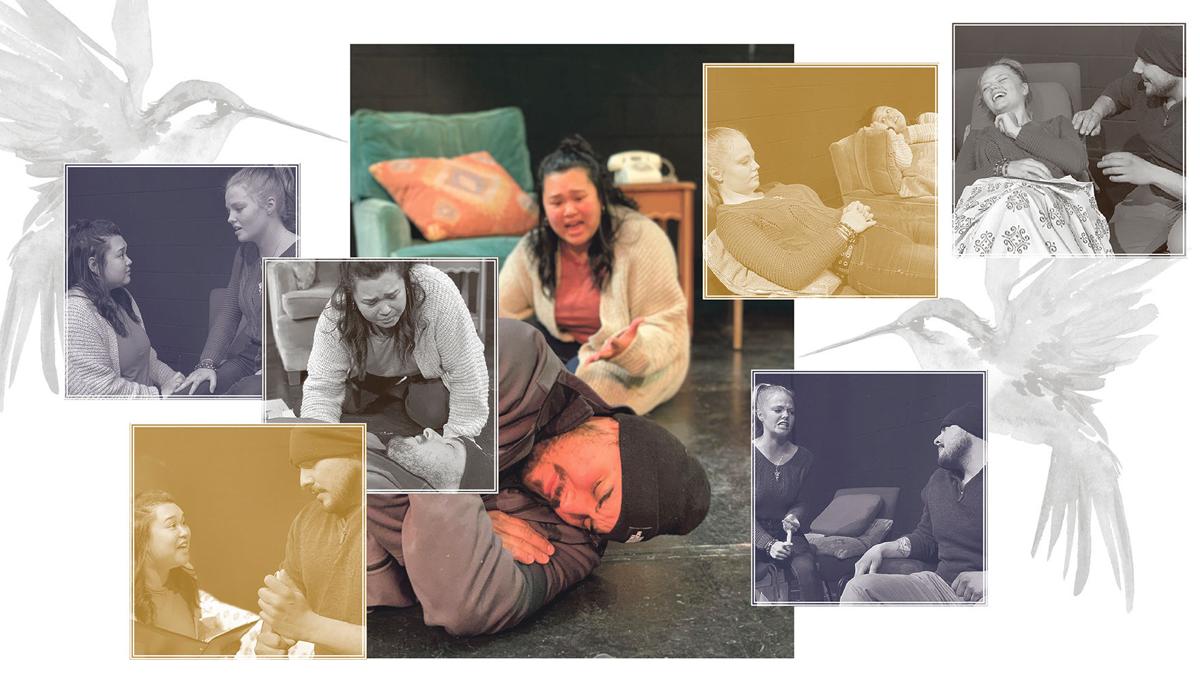 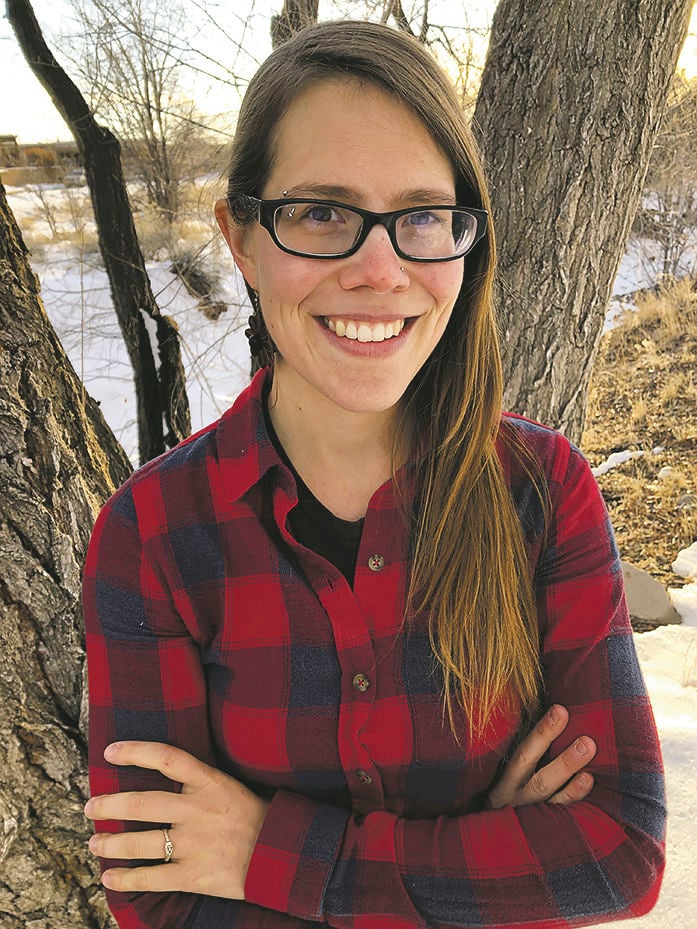 It’s after 6 p.m. on a Monday evening, and the cast of Hummingbird is stumbling through Scene 7 onstage at Teatro Paraguas. There is no set yet for the new play, which doesn’t open for several weeks, so the two actors sit on opposite sides of a bench that is standing in for a bed, reading from scripts. They play Sam, the older brother, and Miriam, the best friend of a young woman named Nadia, who has fallen into a catatonic state. In the scene, they receive bad news about the fate of the siblings’ parents.

Director Malcom Morgan guides them through blocking and line delivery while the playwright, Alix Hudson, sits in the first row. Her knees are pulled to her chin and she has a finger hooked in her mouth as she watches her dialogue come alive. Hudson doesn’t interrupt. But when a simple moment — the uncomfortable uttering of the word cool by the best friend — gets a satisfied laugh from Morgan, she grins.

Hudson, 30, has already put in a full day as the librarian at Kearny Elementary School, where she teaches literacy and research skills in English and Spanish and oversees the bilingual book collection. The Indiana native learned to speak Spanish in high school and participated in an immersive language program in Spain during the summer before her senior year. Her conversational fluency has improved greatly in the six years she’s been living in Santa Fe, teaching children and volunteering at Teatro Paraguas, which takes as its mission the production of bilingual plays and works by Latino writers. Hummingbird is Hudson’s third full-length play to be produced at Paraguas. She has also written numerous short plays for the theater, including the last five children’s shows for the annual Musical Piñata for Christmas.

“She fell in with us about five years ago. She’s very dynamic and creative,” says Argos MacCallum, executive director of Teatro Paraguas. He lists several contributions she’s made, including serving as secretary of the board of directors and compiling and directing Atravesada: Poetry of the Border in 2019, which included pieces by a dozen Chicana writers. She also directed Elliot: A Soldier’s Fugue by Quiara Alegría Hudes at Paraguas in 2019, which was presented as part of the Elliot trilogy collaboration with the Santa Fe Playhouse and Ironweed Productions. “

Alix’s input has become very important to us,” MacCallum says.

As an actor, writer, director, and sometimes ukulele player, Hudson is a dedicated member of the Santa Fe theater community, as well as an enthusiastic educator of the city’s young people. When she can, she uses multiple skill sets at once, as when she voices a lion puppet named Léo for her younger students while they sit in a circle on a colorful rug. In Hudson’s rather masterful, low-key embodiment, Léo speaks with a British accent in both Spanish and English.

“They really love him, so I should probably have others,” she says when asked if Léo is the only puppet she uses at school. “I have a sea dragon and a raven at home. I could definitely expand.”

Unlike Hudson’s previous plays (Our Lady of Mariposas in 2015 and Revolution in 2016), Hummingbird is written entirely in English. It takes place in an unspecified country and features actors from Saipan, the Netherlands, and the border region of Texas in a story about immigration, family, friendship, national identity, and hope. There are environmental themes and a queer love story, as well as an exploration of poetics. But at its core, Hummingbird is a story about three young adults who are trying desperately to continue life as usual while their safety nets are being ripped away. It opens on Thursday, Feb. 6, at Teatro Paraguas.

Hummingbird was inspired by a New Yorker article Hudson read a couple of years ago about immigrant children in Sweden who fall into trauma-induced lethargy that is referred to as resignation syndrome or “giving-up” syndrome. The children and adolescents fall into a sleep-like state and don’t participate in waking life until the trouble in their family is remedied. In the play, Hudson refers to the condition as apathy syndrome. “I was haunted by the images of the children and the idea of them sleeping. It was incredibly rich. I was thinking about it and worrying about it. I wanted to make it a commentary on our border and our situation,” she says. But most documented cases of the syndrome come from Sweden, so applying it more broadly to other countries became complicated. She also didn’t want her potential audience to assume the characters were from South or Central America, nor did she want to specifically attribute their struggles to American policies, given that immigration is an international issue.

“My friend Jonathan Harrell suggested making the countries intentionally nonspecific,” Hudson said. “I said that was it, that’s what I wanted to do — third world to first world. Then the big challenge in writing it was to not make any allusions to a native language or even the drinking age. I’m so glad I did that because I think it makes the play richer.”

Harrell is also a member of Teatro Paraguas’ board of directors and has acted in several productions at the theater. He and another friend and board member, Roxanne Tapia, often help Hudson with revisions to her writing. Sometimes the process involves reading drafts of her plays aloud together.

“Alix has a great ear for the poetry and nuance of language, which makes the dialogue she writes especially compelling,” Harrell says. “It’s a joy to discuss ideas with her. She challenges herself each time she creates something, and she gets things done, which is important. It’s one thing to have a great idea, but Alix sees her ideas through to a finished product.”

Hudson writes in the mornings before work, usually in bed with a mug of herbal tea. (“I have plenty of energy. I don’t need caffeine,” she says.) She lives near Teatro Paraguas, with her fiancée and their four cats, and considers herself a homebody. Although she is often quite physical when she speaks, using her hands and sometimes her whole body for emphasis, she says it’s not so much for dramatic effect as it is nervous affectation. She has her comfort zones, such as Paraguas and the south side of Santa Fe. She gets nervous at the idea of having to drive downtown and find parking. And yet Hudson doesn’t shy away from new challenges, such as in 2017, when she and Tapia decided to learn circus arts.

They signed up for BUST! — Wise Fool New Mexico’s annual introduction to the medium for women and gender-nonconforming people. Together they learned how to perform aerial dance, stilt-walking, and other tricks, and they partnered for an acrobatics performance inspired by a scene from Hudes’ Water by the Spoonful (another installment of the Elliot trilogy).

That year, during a trip to Puerto Vallarta, Tapia was present for the seeds of what became a key scene in Hummingbird. “We went to the Botanical Gardens, which is beautiful,” Tapia recalls. “After hiking, we had drinks at their balcony restaurant. They gave us tiny handheld hummingbird feeders. We stood at the railing and fed the hummingbirds, just like [Hudson] describes Nadia and Miriam doing in the play. There was one hummingbird who would attack the others to keep them away from the feeders, just like in the story.”

At rehearsal, the energy picks up as the actors come to a deeper understanding of each moment in the scene. The older brother, Sam (Devin Zamora), is concerned about Nadia and their parents, and even though he’s short with Miriam (Christine Armenion), Nadia’s best friend, he’s not angry with her. She is a naturally sunny person who wants to be helpful to Sam while remaining at the bedside of the girl she loves.

Sam hands Miriam a letter from the government several times, until Morgan is satisfied that the action seems angry, resigned, and natural. Miriam reads the letter silently to herself.

“This is the moment where you understand what he’s feeling,” the director says.

“I just smothered her with super-shiny Strawberry Sensation lip gloss,” Miriam tells Sam. “I can’t even do the laundry right. Nadia sucks at it even worse. Remember when she dyed your sheets pink by accident last fall? We aren’t adults. Not really. … Not for something like this.” Hudson shifts in her seat and settles her feet on the floor for a moment before again pulling her knees to her chin. As the actors continue to say their lines, she hangs on each syllable, nodding along. ◀

“Alix has a great ear for the poetry and nuance of language, which makes the dialogue she writes especially compelling. It’s a joy to discuss ideas with her." — Jonathan Harrell