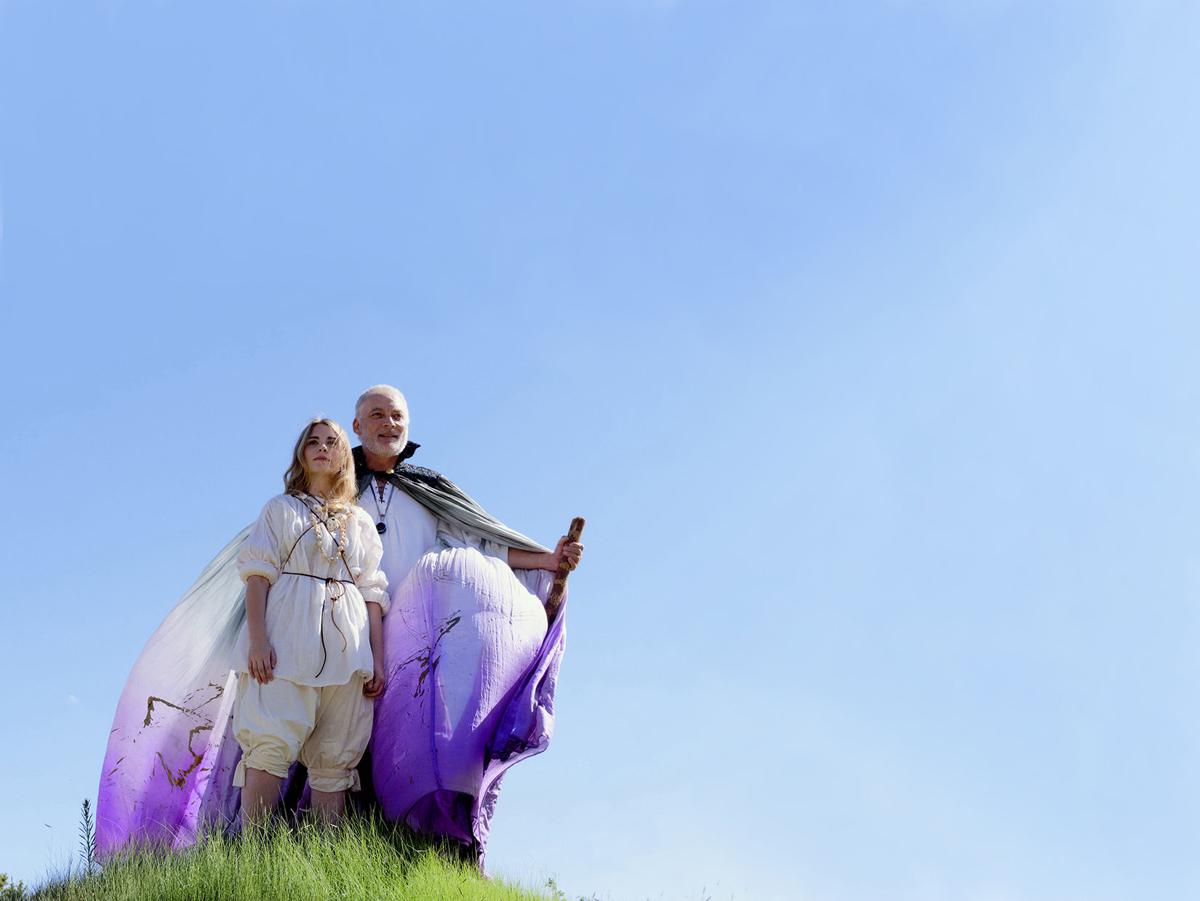 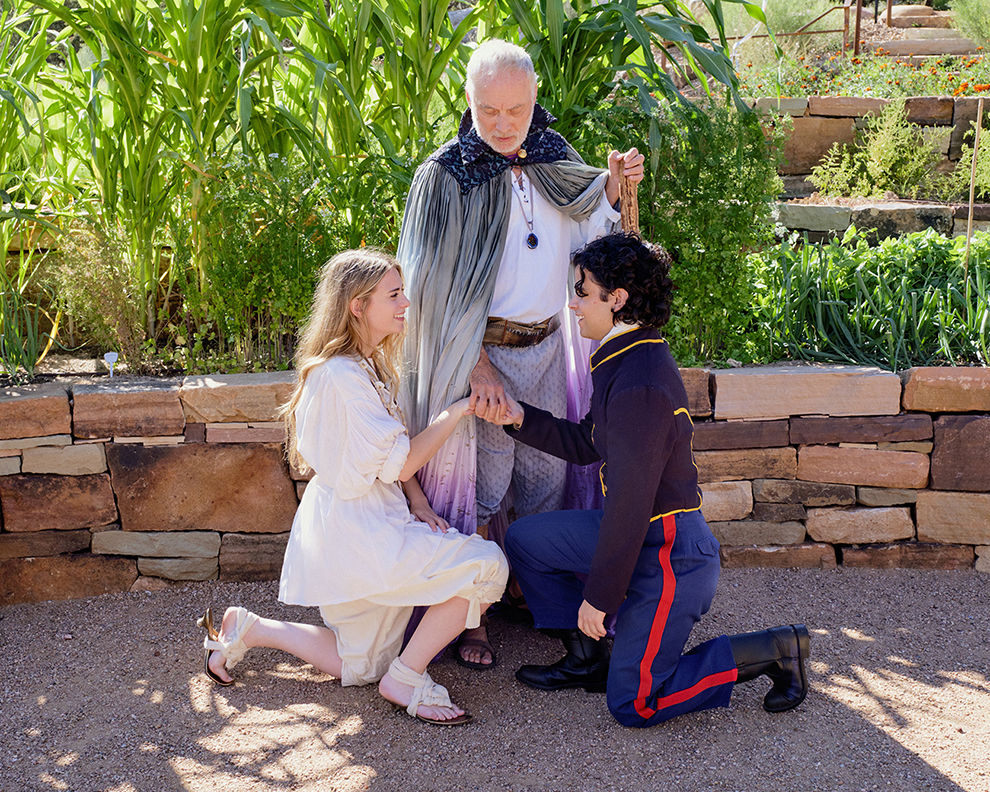 A great storm strands a sailing ship on a remote island inhabited by Prospero, a deposed ruler, his wild-child daughter, Miranda, and Caliban and Ariel, the native creatures he has enslaved. The passengers on the ship are the very noblemen who conspired to usurp Prospero’s position as the duke of Milan, a dozen years earlier. And Prospero — who has learned a great deal about magic during his exile — has caused the storm that washed them ashore.

The well-read but vengeful Prospero is the protagonist of The Tempest, one of Shakespeare’s late plays. It was written around 1610 and first performed a year later — around the same time Spanish conquistadors founded the city of Santa Fe in a region of existing Pueblo communities. “The Tempest seems initially inspired by a shipwreck that took place in 1609, and that, too, is closely connected to the American story because the ship was carrying a new governor who was going to relieve the founding governor of Jamestown, in the Virginia Colony,” said John F. Andrews, president of the Shakespeare Guild.

The Shakespeare Guild holds most of its activities in New York, but this summer Andrews — a Santa Fe resident — is collaborating with Shakespeare in Santa Fe and its artistic director, Rachel Kelly, to bring a production of The Tempest to the Santa Fe Botanical Garden’s Ojos y Manos Garden amphitheater, opening on Wednesday, Aug. 23. With director Nagle Jackson at the helm, Shakespeare in the Garden looks very much like a return to the days when Shakespeare in Santa Fe was held on the campus of St. John’s College. Jackson directed numerous productions for Shakespeare in Santa Fe between 1992 and 2002, and during that time his name became nearly synonymous with the annual event. Jackson, who is also a playwright and an experienced Shakespearean director, has overseen such companies as the Milwaukee Repertory Theatre and Princeton’s McCarter Theatre near his home in New Jersey.

Though Jackson does not connect his version of The Tempest directly to the history of European conquest in New Mexico, Andrews considers the chronological similarities between the play and the founding of the City Different to be important. Shakespeare plays are often reimagined into different historical time periods, sometimes with their characters transformed into recognizable political figures, as was done in the Public Theater’s presentation of Julius Caesar in New York City in June — when the assassination of a Trump-like Caesar inspired boycotts and disruption during the performances. It is not difficult to see Prospero as a metaphorically marooned Donald Trump, alone with his magic, his oddly sheltered daughter, and a few indentured servants — nor is it a reach to view the squabbling, duplicitous noblemen from the boat as Trump’s closest advisors. But Jackson is not taking that potentially provocative route.

“One of the interesting things about The Tempest is that the entire play takes place outdoors, which makes it perfect for the Botanical Garden,” Jackson said. “The Tempest can be done as a huge spectacle with lots of music and dance, or it can be done simply, as a kind of domestic comedy. It has become, in my mind, a political comedy as well, in that there is an attempt at an assassination and the whole thing is triggered by Prospero having been usurped and thrown out. But at this time of wished-for impeachment of the president — I don’t know. People will see that it isn’t as easy as it looks, and the ramifications can be difficult. We’re focusing on the comedic aspects of the plot, and a few magical surprises.”

“There are magical fairies and sprites,” Kelly said. “And there is a very strong connection to nature in the play — the spirit of Ariel, and Caliban’s connection to the island, how he describes every inch of it, the berries and the roots. I feel personally, in this day and age — politically — that it’s important to do something that honors the natural world and shows how when our connection to it is powerful, then great healing can happen.”

Actors were cast through auditions in New York and Santa Fe. Victor Talmadge plays Prospero. Talmadge has appeared on Broadway, at the Public Theater, Soho Rep, and the Pasadena Playhouse, among other venues, and in film and on television. He taught at the College of Santa Fe and Santa Fe University of Art and Design before becoming a professor of theater studies at Mills College in California. Jackson said that Prospero, more interested in books than in governing, was not a particularly effective ruler in Milan before his position was usurped by his brother, Antonio (Hamilton Turner, a mainstay of the Santa Fe theater scene), and Alonso, the King of Naples (Adam Miranda, who performs with the Oxford University’s Experimental Theatre Club and the Oxford’s University College Players). Talmadge is much younger than the typical Prospero, who is often played as if he is a wizened wizard or warlock. But Jackson objects to the traditional casting. “It makes absolutely no sense. Playing him as old is dead wrong. His daughter is fifteen.”

He also objects to the way the free-spirited Miranda (Miranda Lichtman, a student at New York University’s Tisch School of the Arts) is often played as excruciatingly sweet and naive. “She’s grown up with no human beings around other than her father, so she’s a complete innocent. She’s also been educated by her father. She’s very bright and well-spoken. Her perceptions are innately adolescent, but I don’t see sweetness in the lines at all. She runs around in her bare feet — she’s not prim and proper. If she wants something, she takes it.” For example, within moments of meeting the shipwreck-stranded Ferdinand (Daniel Cabrera, an Albuquerque native and recent NYU graduate), she proposes to him. The emotionally reserved heir apparent promptly confirms Miranda’s virginity so that their courtship can proceed apace.

“Ferdinand has all sorts of rules, and he knows he won’t be able to have a relationship with her if she’s not a virgin,” Jackson said. “So, you have these two totally different kinds of people — one very formal and civilized, and this other one full of raw energy.”

Attendees of Shakespeare in the Garden are welcome and encouraged to picnic at the Orchard Garden prior to the performances, while Mary Outten leads an ensemble of musicians and singers in Renaissance music. Gates open for picnicking at 6 p.m. for all performances except for opening night, when a reception will be held at that time. Andrews emphasized that Shakespeare in the Garden is a family and community event, a great opportunity to introduce children to the Bard or bring a date to an outdoor theater experience. “We really want this to be something that appeals to young people as well as to the codgers, like me, who have been reading Shakespeare all our lives.”

There are magical fairies and sprites. And there is a very strong connection to nature in the play.