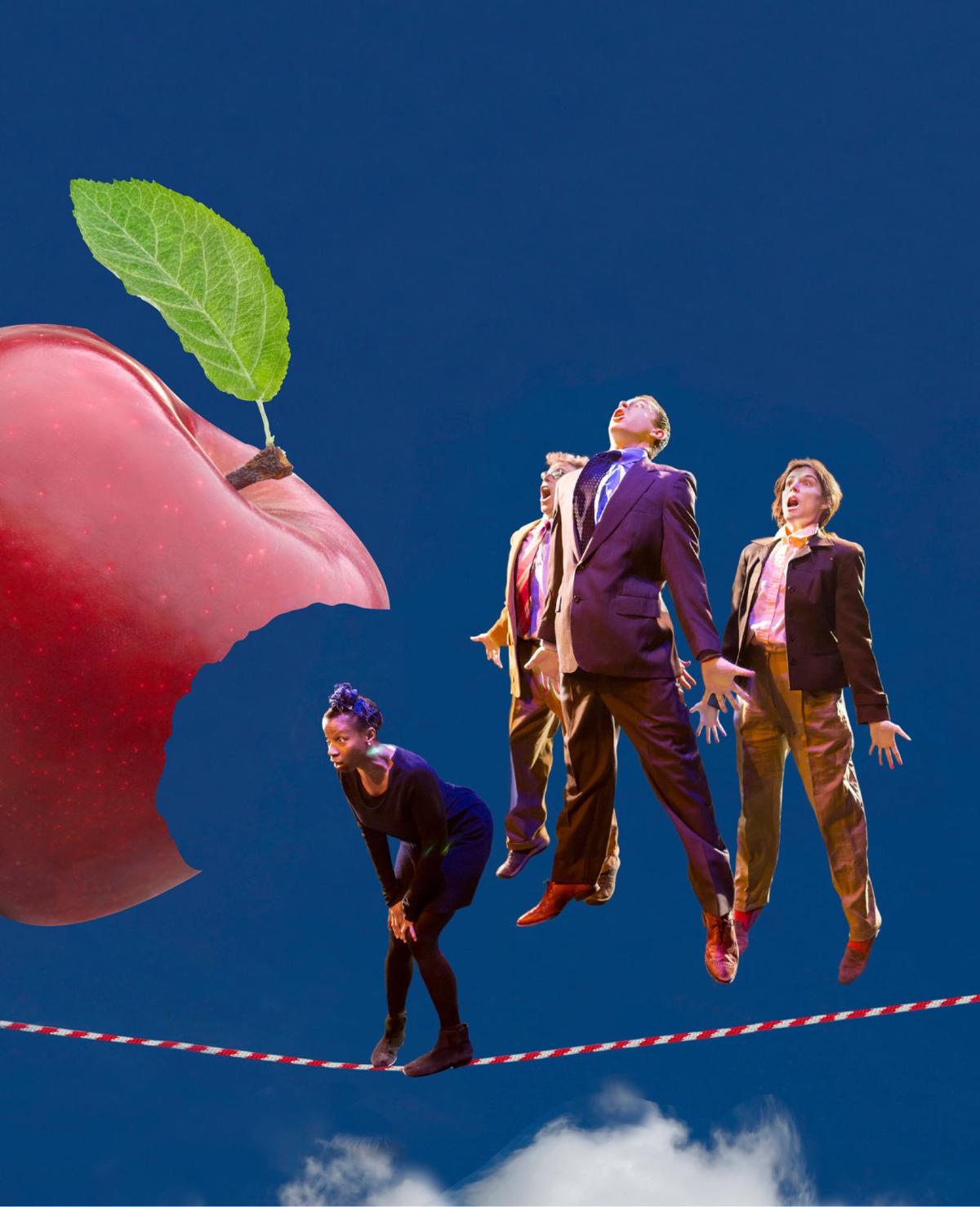 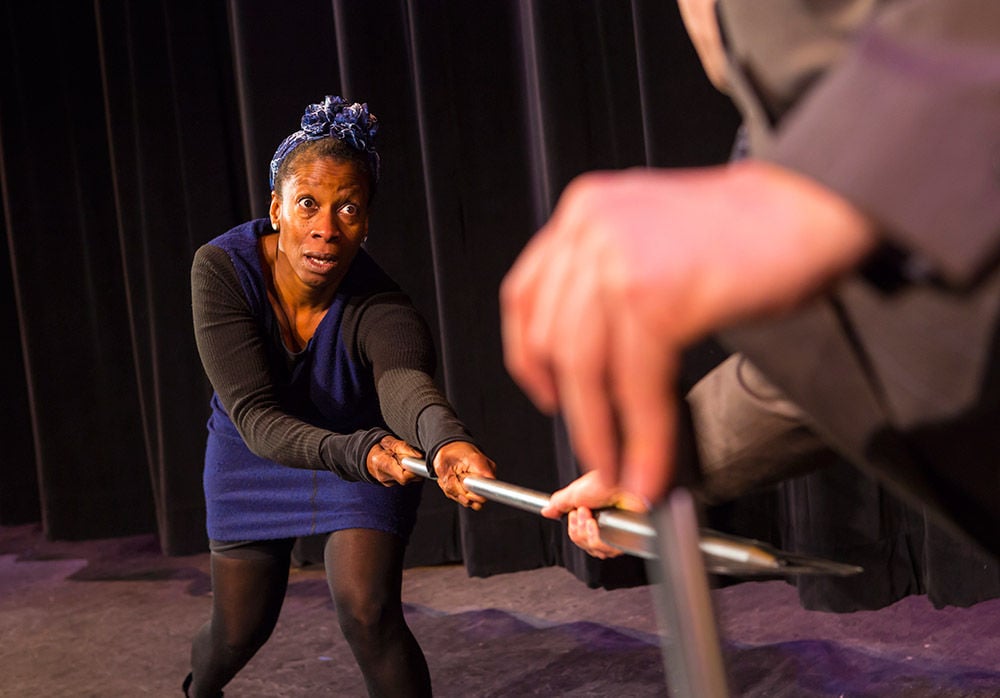 Theater Grottesco writes all of its plays as a collective. The members of the permanent company might spend more than a year thinking and talking about ideas before getting on their feet to shape the story and begin rehearsals. They rely on the art of clowning — as well as dance, movement, and gestural communication — more than on a scripted narrative. The experience of watching the end result can be disconcerting, even rigorous, as nothing about what they present is typical of traditional American theater — like, say, a play by Arthur Miller. It’s closer in spirit to Shakespearean comedy but far more experimental — playful, even childlike at times — strongly anchored in the history and tradition of European theatrical performance. Sometimes, what an audience takes away from Theater Grottesco is not exactly what the actors intended. They don’t mind. They want to hear what you saw and incorporate it into their creative process.

Grottesco was originally founded in Paris and has been in Santa Fe since 1996, led by John Flax, who, with three other company members, appears in the troupe’s latest endeavor, Pie, playing at the Adobe Rose Theatre from Friday, April 14. Pie was inspired by the following quotation from astronomer Carl Sagan: “If you want to make an apple pie from scratch, you must first invent the universe.”

“And, here we are,” said Danielle Louise Reddick, who appeared in Grottesco’s The Moment of YES! in 2015, along with the rest of the Pie cast.

Pasatiempo interviewed the cast at the Grottesco rehearsal space, a rented storefront at the Santa Fe Fashion Outlets on Cerrillos Road. The windows are covered in brown paper, for privacy, but a sign on the door and a stand outside with a stack of rack-cards for Pie announce their presence. When writing about Theater Grottesco, the first challenge is to get a handle on what the current show is about — a slippery prospect. The second is the group’s insistence that most of the plot points they reveal remain off the record. The third is that Flax can be a bit of a trickster.

“Well, there is this old couple, and they’re married, and they’ve had a really rough life,” he said when the interview began. “No, that’s not it.”

“That’s not what it’s about,” the other cast members chimed in, laughing and talking over one another, sounding for all the world like a congress of clowns or some kind of Greek chorus.

“Pie is about so many things. It’s about everything and nothing,” Apollo Garcia Orellana said. “But it’s not about nothing, so we cut that out.”

All Pasatiempo can say about the beginning of the play is that the characters — who are clowns — have been called to a place where their expertise is needed, but when no one tells them what to do, they crack. And then they turn from clowns into bouffons.

“They are almost gods,” Orellana said.

“It’s crazy. It’s stupid. It’s about a giant baby who eats space and time, and pukes out the universe,” said Kent Kirkpatrick, in a moment that was not specified as off the record. Kirkpatrick appeared in the recent Adobe Rose production of Bus Stop.

“Bouffon” is a French word, which has its roots in the Latin verb buffare, meaning to puff up or fill one’s cheeks with air for comic effect, and the Italian buffone. In the 16th century, it denoted a professional jester. Though “buffoon,” in its modern usage, usually means a crass joker who does not perceive his own ignorance, according to Flax, the art of bouffon predates that of clown and is a much harsher style of comedic performance. Flax trained at L’École Internationale de Théâtre Jacques Lecoq in Paris, an institution dedicated to playwriting through improvisation, new works, and creating playful physical performance languages. Lecoq is known to have re-coined the term “bouffon” for theater in the early 1960s as a performance style that relies heavily on mockery. Khozein and Orellana, who both grew up in Santa Fe, also trained at Lecoq.

“Bouffon is satire,” Khozein said. “But John is better at telling this story.”

“It comes out of the Middle Ages, when anyone who was different was excluded from society,” Flax said. “Society was afraid of them, so they were thrust out and they found each other in forests and on ships of fools. They created their own strange societies with their own hierarchies. Once a year they were invited back into the villages to scare off evil spirits, while the people hid in their homes after eating an elaborate feast. The bouffons would feast and make wild mockery — and that’s where Mardi Gras comes from. All clown and commedia dell’arte comes from that, but it’s been kind of sanded down and made sweeter. Bouffons are more dangerous. They have nothing to lose. If you pick up a shovel to kill one of them, he’ll probably do rat-face at you before he dies.” Flax demonstrated by screwing up his face and hissing, quite like a rat might if faced with imminent danger.

Flax’s elaborate history lesson was followed by a string of highly conceptual off-the-record information about Pie’s plot, involving geology, economics, and spirituality, capped by a game show. What we can say for certain is that bouffons destroy everything and then reset the universe.

“The characters are thrown into a situation where they have to relearn what it is to be free or how to function,” Orellana said.

“Any commentary regarding the current state of things is incidental, unplanned,” Reddick said. “Things come out in rehearsal, but we only see it in retrospect. We are really mirroring and expressing humanity right now.”

Many questions remained, but the most pressing was obviously, “Will there be pie?”

Pie was inspired by the following quotation from astronomer Carl Sagan: "If you want to make an apple pie from scratch, you must first invent the universe."