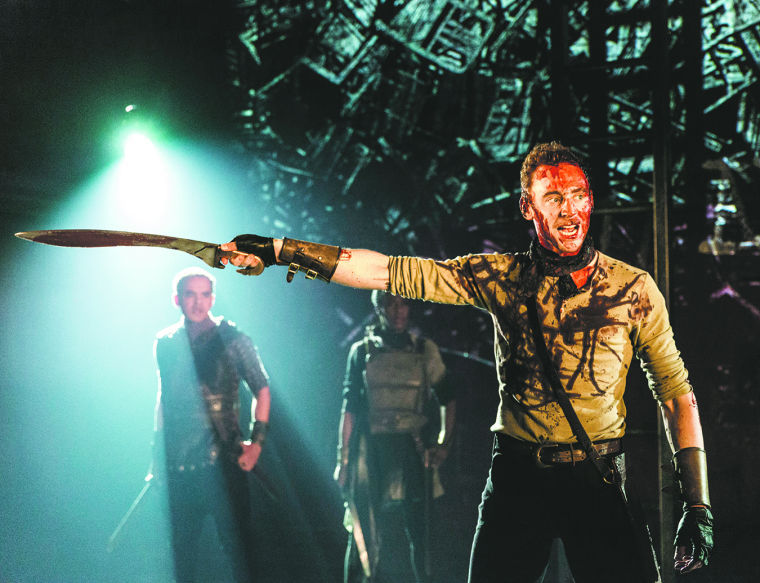 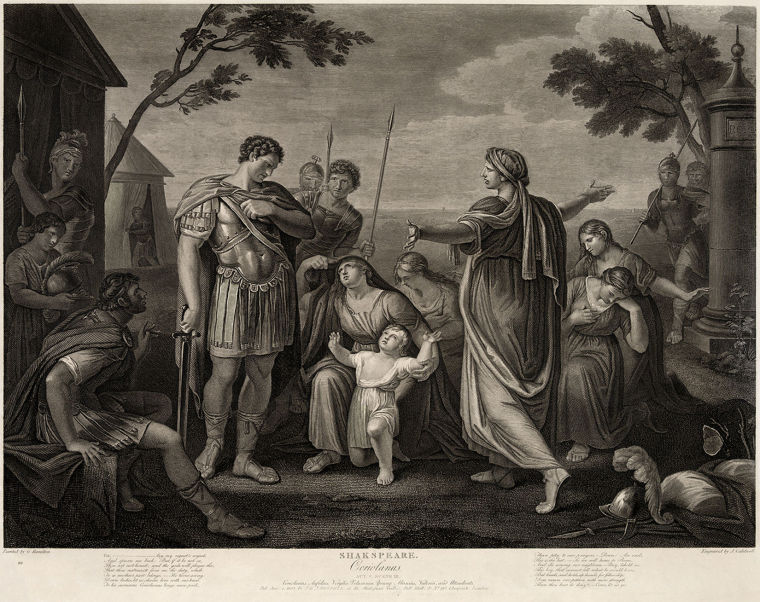 From an 18th-century painting by Gavin Hamilton

From an 18th-century painting by Gavin Hamilton

Shakespeare wrote his tragedy Coriolanus sometime in the period between 1605 and 1610, with 1608 being the year cited by a number of scholars grasping at scant information. In any case, it was a work of his full maturity, arriving just a few years after the tragic trio of Othello, King Lear, and Macbeth, but audiences have never granted it the popularity they have bestowed on those works. It nonetheless soldiers on, securing, if not affection, at least profound respect from its aficionados. A production currently running at the intimate Donmar Warehouse in London will be beamed internationally — including to the Lensic Performing Arts Center on Friday, Jan. 31 — as part of the National Theatre Live in HD incentive.

Coriolanus traces the rise and fall of an arrogant patrician of ancient Rome, Caius Marcius, who appends the name Coriolanus after defeating the neighboring Volscians at the town of Corioli. On the basis of his military triumph he is made a candidate for the consulship, but his contempt for common citizens — the plebeians — renders him temperamentally unsuited for such a position. They so resent his disdainful bearing that he leaves town and enters into an opportunistic political alliance with Volscian general Tullus Aufidius; if he cannot gain the admiration of the Roman citizens, at least he can conquer them with force. The Roman people are outraged by his turncoat tactics, and at the last minute he is dissuaded from his plan by his family, particularly by his domineering mother, Volumnia. He prepares to draw up a peace treaty with the Romans, but he is by now too far enmeshed in his scheme. Aufidius, who has privately resented Coriolanus all along, denounces him to the Volscian authorities, and Coriolanus is slain in the ensuing mêlée.

We thought we might benefit from some help in penetrating the play’s tough exterior, and we knew just the man for the job: John Andrews, OBE, who in 2008 moved to Santa Fe from Washington, D.C., where he spent a decade as director of academic programs at the Folger Shakespeare Library and four further years as deputy director of education programs for the National Endowment for the Humanities. He now devotes much of his time to overseeing The Shakespeare Guild, a philanthropic organization that supports Shakespearean enterprises internationally. His overflowing résumé includes the fact that The Literary Guild (a unit of Doubleday) engaged him to edit The Guild Shakespeare, its 19-volume annotated edition of the Bard’s works. This grew into a still more detailed collection published by Everyman’s Library, in which his edition of Coriolanus displays a rigorously scholarly text on the right-hand pages and his detailed, line-by-line commentary on the left — that is, when the commentary doesn’t spill over onto the right-hand pages as well.

Pasatiempo: How do your Guild and Everyman editions differ from other Shakespeare editions?

John Andrews: Originally, I thought I would focus on the commentary, since all modern editions were pretty much the same when it came to the text itself. There is a strong editorial tradition that goes back to the 18th century, the time of Alexander Pope and Lewis Theobald. Theobald especially made a lot of emendations, and it’s amazing that so many survive, since so often they were unnecessary and not nearly so good as what was there already in the publications from during or near Shakespeare’s lifetime. In the 18th century, language got formalized and standardized. But I went back to the original published texts — the quartos and the Folio of 1623 — and started looking at them in a way I thought no one had done when preparing editions for general readers, very often incorporating unusual early spellings. For example, in the early editions the word “human” is almost always spelled with a terminal “e”: “humane.” So when Lady Macbeth complains that her husband is “too full of the milk of human kindness,” as actors will pronounce it today, she was saying more than we would likely pick up today; it is both “human” and “humane.” In my editions I ended up keeping the original spelling and the original punctuation wherever I felt it would make a difference, and in almost every case I decided it would be presumptuous of me to assume it would not make a difference. In the commentary, I found myself often pointing out possibilities of ambiguity, making cross-references to other instances of the same kinds of unusual spelling elsewhere in other plays.

Pasa: Does Coriolanus offer examples of such ambiguities?

Andrews: Oh, yes. For example, in Act 4, Scene 7, there are two uses of the word “cluster.” Coriolanus’ friend Menenius refers to the plebeians as clusters, and in every edition I checked this is said to mean “mobs.” That is in fact what they are, but it occurred to me that I had encountered that word before in Othello. When Iago watches Cassio kiss Desdemona’s fingers out of respect while they’re waiting for Othello’s ship to arrive, he refers to them as “clyster-pipes” in the early quarto edition, which becomes “cluster-pipes” in the folio. The word derives from the Greek “klyster,” which reached Middle English as “clyster,” meaning an enema. What Menenius is saying there, or Shakespeare is saying with his “small Latin and less Greek,” is that the mobs served as a kind of instrument for the evacuation of the city politic, that they drove Coriolanus out of the city, in effect giving the body politic an enema.

That’s the kind of payoff you get when you consider these early sources. Understanding this enriches the meaning. It ties in with the imagery of the play, which is really about physical aspects of digestion; a famous passage is the “parable of the belly,” and there are places where Shakespeare plays with a pun on the words “faces” and “feces.” And the title character’s name, as the scholars Stanley Cavell and Kenneth Burke have pointed out, is a play on the word “anus.” In a literal sense, this play is about “the body politic” — how it needs to function properly in all its parts, that you can’t have members in rebellion.

Pasa: Politics being out of balance seems relevant to our own time, doesn’t it? Your editor’s introduction to Coriolanus begins by pointing out that, in the play’s opening scene, “Shakespeare invites us to explore a perennial problem: the equitable distribution of a society’s goods and resources.” That sounds like income inequality.

Andrews: That’s one reason the play is appearing more often these days. It really relates to what is going on in society, and not just American society. Ralph Fiennes’ movie of Coriolanus, from 2011, sets it in Serbia, in a dark, Eastern European, post-Soviet society. The opening scene of the play is unquestionably about the 1 percent versus the 99 percent, the belly consuming all of society’s resources and distributing nothing to the other parts of the political body. It is not the first time Shakespeare dealt with this question; it also makes up a key scene in King Lear.

Pasa: Are there other important themes we might watch for in this play?

Andrews: The theme of sacrifice. Coriolanus is sacrificed at the end of the play. I keep seeing in this play references to Isaiah, chapters 52 and 53, passages about the suffering servant, which are often seen as prophetic of the Crucifixion. These are very familiar to us as they figure in the libretto for Handel’s Messiah: “He was despised and rejected of men,” for example, or “He was cut off out of the land of the living.” Shakespeare suggested ways in which Coriolanus becomes a man of sorrow, is despised, is cut off, and we knew him not. Shakespeare looks at Roman history as depicting a pre-Christian society that couldn’t be a really healthy society because it couldn’t develop into something harmonious. We find something similar in Julius Caesar, where Brutus says, “Let us be sacrificers but not butchers.” These things would not be understood by the characters in the plays, but Shakespeare was writing for an audience that would pick up on these analogies.

Pasa: How does this fit into the trajectory of Shakespeare’s several plays set in ancient Rome?

Andrews: It’s his fourth and final play about Rome. His early play Titus Andronicus is about the end of the Roman Empire. Julius Caesar is about the transition from the Roman Republic to the empire. Antony and Cleopatra involves the establishment of the republic. And Coriolanus goes back to the beginning, shortly after Lucius Junius Brutus in effect founded the republic by banishing the Tarquins, in 509 or 510 B.C. So Coriolanus is about how the Republic of Rome becomes formed in its early stages. It’s in a state of arrested development, struggling to realize its potential.

Pasa: Do you rate Coriolanus highly with Shakespeare’s oeuvre?

Andrews: It is certainly true that a lot of the characters, and Coriolanus in particular, are unsympathetic characters. But personally, I find it a powerful play. T.S. Eliot called it, along with Antony and Cleopatra, “Shakespeare’s most assured artistic success” and ranked it higher than Hamlet. I suspect he may have been alert to a lot of the wonderful ambiguities we find in Coriolanus. ◀