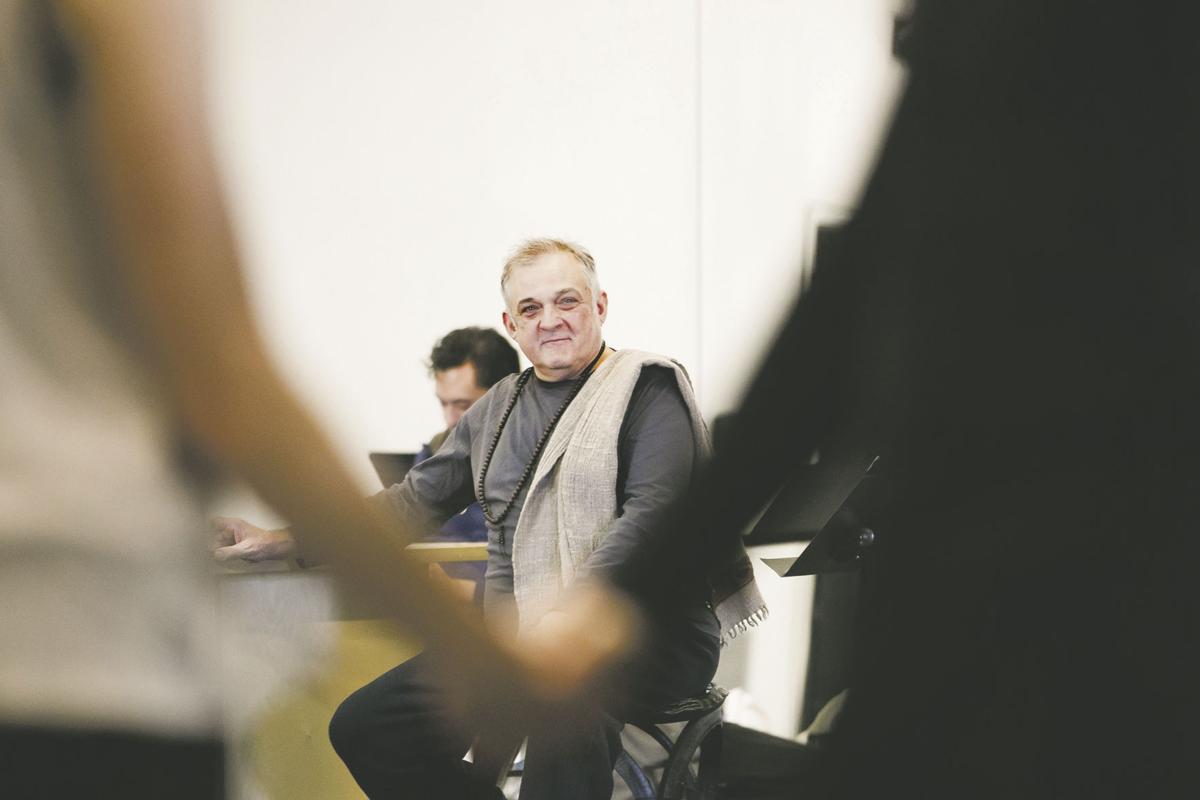 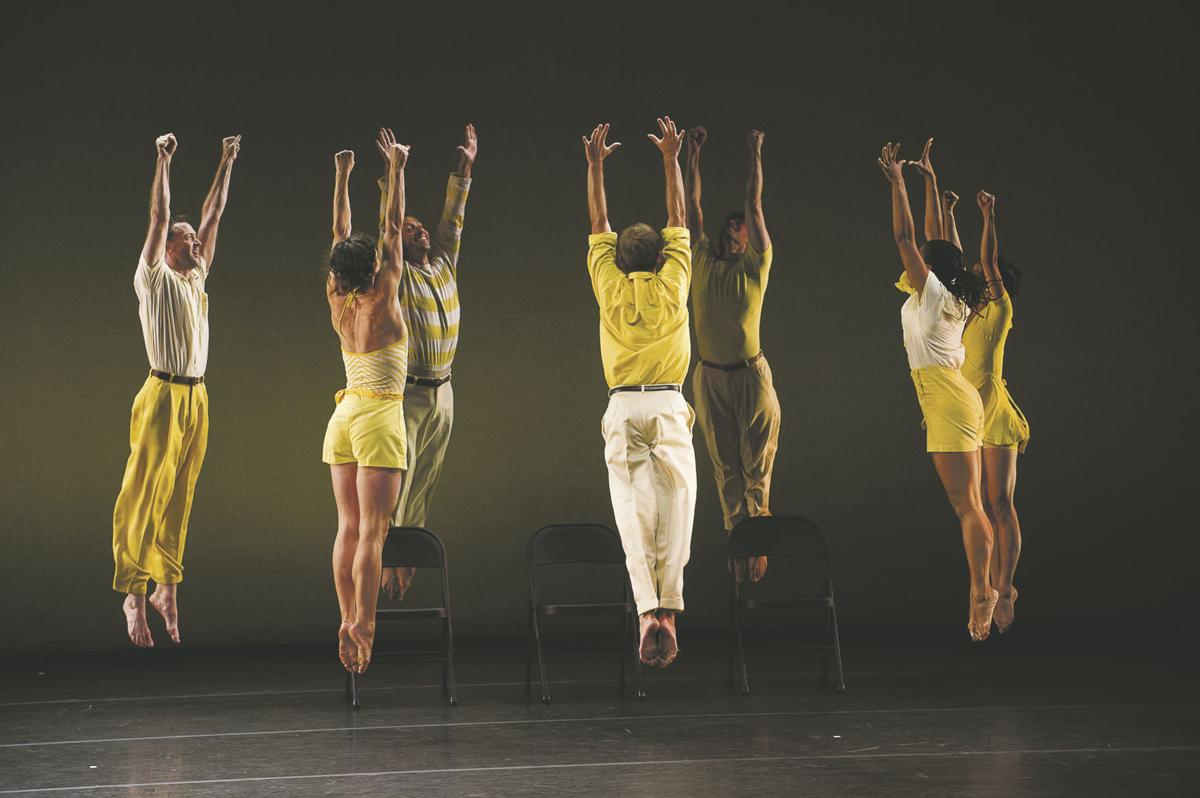 A visit from the Mark Morris Dance Group always promises to boost the spirits. The group appears Friday, Nov. 30, at the Lensic Performing Arts Center, courtesy of Performance Santa Fe, in a program of four works that cover a range of musical and emotional territory. Musical territory is of central concern with this company. Ever since founding the Mark Morris Dance Group (MMDG) in 1980, Morris has made no secret about his preference that a dance company be backed up by live musicians rather than recordings. In 1996, he formalized the MMDG Music Ensemble, a group of top-notch instrumentalists who join the dancers in real-time interpretations of the eclectic repertoire Morris employs, and since then, they have been an integral part of his troupe.

The opening number in the Santa Fe event, Dancing Honeymoon, celebrates popular songs of the 1920s and early ’30s as transcribed and arranged from historical recordings made by Gertrude Lawrence and Jack Buchanan, leading singers of that era in the United Kingdom. It’s a fast-moving sequence of 15 songs in 18 minutes, taken from medleys in which the two singers slip seamlessly through little snippets of the songs. Some of the songs may be at least somewhat familiar, like the Gershwins’ “Do Do Do” (1926), Cole Porter’s “Experiment” (1933), or “You Were Meant for Me” (its melody written in 1929 by Herb Nacio Brown, a native of Deming, New Mexico). Others, especially those by British songsmiths, may be new discoveries for many listeners.

“I’ve never been super-fascinated by most contemporary popular music,” Morris said in a phone interview. “Of course I hear it, and I keep track, because how can you not? But I grew up in a family that sang all the time. When I was a kid, I loathed the music my parents favored, which was big-band music, but I also knew the songs from my grandparents’ time. I grew up watching old movie musicals, so these songs were around. Maybe I’m always 50 or 60 years behind. And then I discovered how much I love the English point of view of this stuff. It’s tight but also kind of naughty and sexy and funny and sad. Pre-Hays Code. Some people would accuse it of not swinging, but I love it.”

The arrangement Morris uses is for piano, violin, drums — and singing. But doesn’t it go counter to the MMDG ethic to superimpose the pre-recorded voices of Lawrence and Buchanan? Morris offered clarification and disclosed a surprise: “We’ve never done it with their recorded voices. Someone has always sung it as part of the musical ensemble — not always me, but I’ve been singing it myself for the last several gigs of this piece, and it goes well enough that I continue. It puts me in the show, which is a nice thing because I don’t perform dancing very much any more.”

In any case, we wondered if dancing to vocal music created a particular challenge, with the lyrics perhaps forcing audience members to divide their focus among the parallel choreography, music, and words. “My terrible admission,” he responded, “is that it’s sometimes easier when you have a text and by implication some kind of a narrative.” Another piece on the program, Words, uses a selection of Mendelssohn’s solo-piano pieces titled Songs without Words. “The thing about the Songs without Words,” he said, “is that it’s very easy to come up with words [for them]. That’s why I call the dance piece Words. The dance supplies a suggestion of the words that might be there. I always refer to it in some way, whether I’m doing very obvious mimetic translation of the text to the eye, or ignoring it and just dealing with rhythm or tune. For me, it’s interesting and fun, and I do it all the time. It’s a way to come up with ideas and accept or reject them.”

Words is a relatively recent entry in the MMDG repertoire, having been created in 2014. In contrast, the remaining two pieces are classics: He introduced the solo dance Three Preludes (to Gershwin’s Three Piano Preludes) in 1992, and Grand Duo, to a Lou Harrison score, in 1993. Once Morris has created a work of choreography, it tends to remain basically a fixed quantity — for these pieces, even through a quarter of a century. “Just about always the text of the dance remains, and dancers move through it,” he said. “Occasionally, I’ll fix something that was a glaring mistake in the choreography — glaring to me. I don’t update it. But every person dances in a different way — hooray! That shows even more when one’s doing something in a very tight unison. In a solo, you have more leeway than you would in a group dance, where you have other people to match. I used to perform Three Preludes myself — I made it up for me and Mr. Baryshnikov simultaneously — and it’s been done by a number of dancers over the years. It comes and goes from the active repertory so we don’t get sick of it. Right now, Laurel Lynch is the one who does that solo, and it’s really hard. The dance is quite virtuosic and brief, but it’s a very challenging and thrilling dance.”

With the evening’s closing work, audiences will be transported to a piece using music by one of Morris’ frequent collaborators, the late Harrison. Morris became a good friend of Harrison and Harrison’s spouse, Bill Colvig, who lived in uncensored freedom at their home in Aptos, California, in the hills above Santa Cruz. Already in the 1980s Morris was on their visitors’ list, and his voice takes on a particular gleam when he reminisces about their time together, dancing, making music, and talking. The last time MMDG appeared at the Lensic, it presented Pacific, which used Harrison’s Piano Trio.

This time, the Harrison score is Grand Duo, which Harrison composed in 1988 for violin and piano. In concert, the composition runs well beyond a half-hour. Morris allows that Harrison was not pleased at his decision to excise one of its five movements — a Largo that Morris describes as “a gorgeous piece,” but one that just ran too long for choreographic purposes. Morris choreographed Grand Duo backward, you might say, beginning with Harrison’s finale, a polka that might remind a listener of the strangely sardonic merriment of Shostakovich. He initially choreographed it as a standalone piece. “For a few months,” he said, “we would perform just the polka movement as a four-minute closing piece for whatever concert we were doing. It can be done with any even number of dancers; it’s symmetrical, so it’s adjustable in that way.”

At one point, the dancers are all lying on the stage in a wide circle, moving their legs about in unison. Was this, we asked, Mark Morris’ Busby Berkeley moment? “Those moments happen all the time,” he replied, “There’s always a crane shot in my work. It’s a finale.” Some months later, he went back and choreographed three of the preceding movements to lead up to the polka, something he said he had never done before or has since. Those earlier movements display more of the Asian influences that made a great impact on Harrison, who was an especially devoted student of Korean music — a nice counterpart to Morris, who has drawn ample inspiration from Indian and Indonesian dance traditions.

One anticipates an evening that, notwithstanding its variety, will exude many moments of goodwill. That seems indelibly part of the character of MMDG and its founder-director. Morris said, “I don’t want every piece that I show to be a mirror of the horrible day you just had leading up to the hard time you had finding a parking place to go the theater. I’m a little bit optimistic. Of course I have tragedy and sorrow and grief in my work; there can’t be the light without the heavy. What seems sort of breezy and fun is still about how everybody feels all the time about each other.” ◀

The website of the Mark Morris Dance Group offers a dizzying array of drop-down options, a necessary reflection of the many things the organization does apart from performing dance concerts. One of the most urgently important of these is Dance for PD, an incentive the group co-founded in 2001 with the Brooklyn Parkinson Group and has since subsumed under its sole aegis.