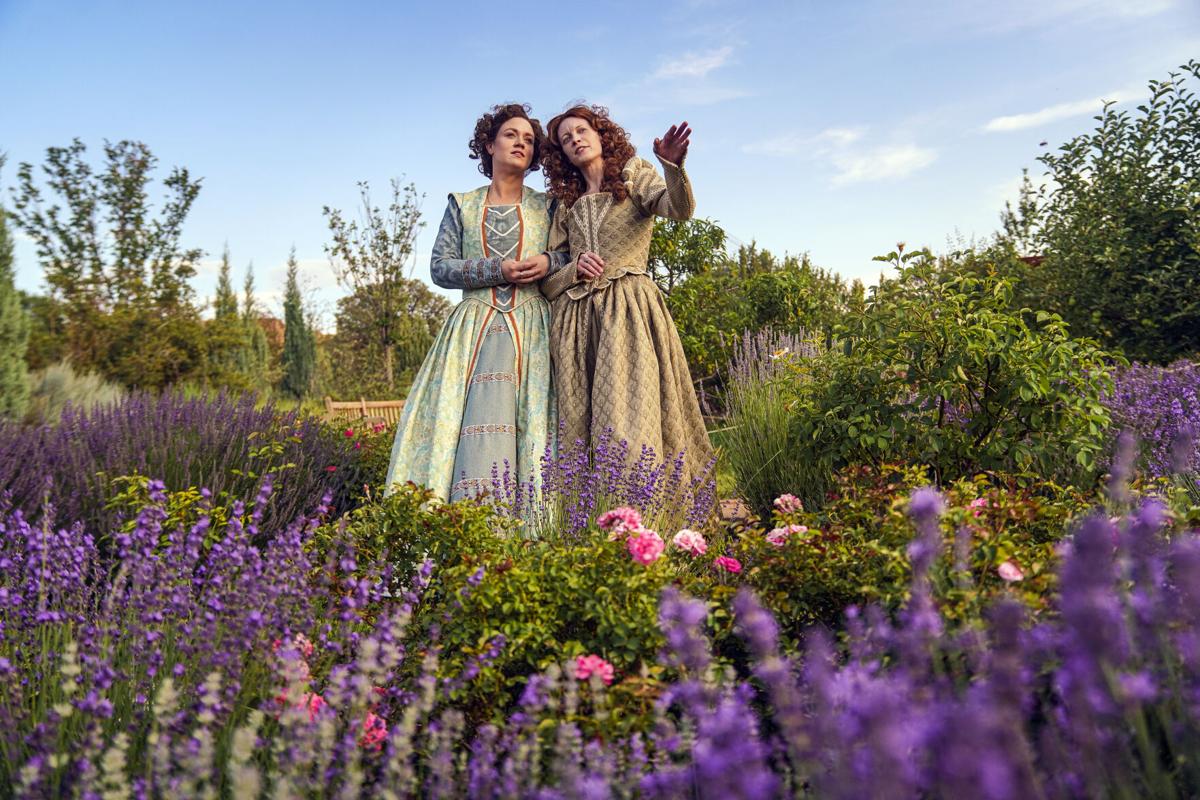 Emily Rankin as Rosalind (right), and Joey Beth Gilbert as Celia, rehearse a scene for As You Like It amongst the lavender at the Santa Fe Botanical Garden; photo Gabriela Campos/The New Mexican 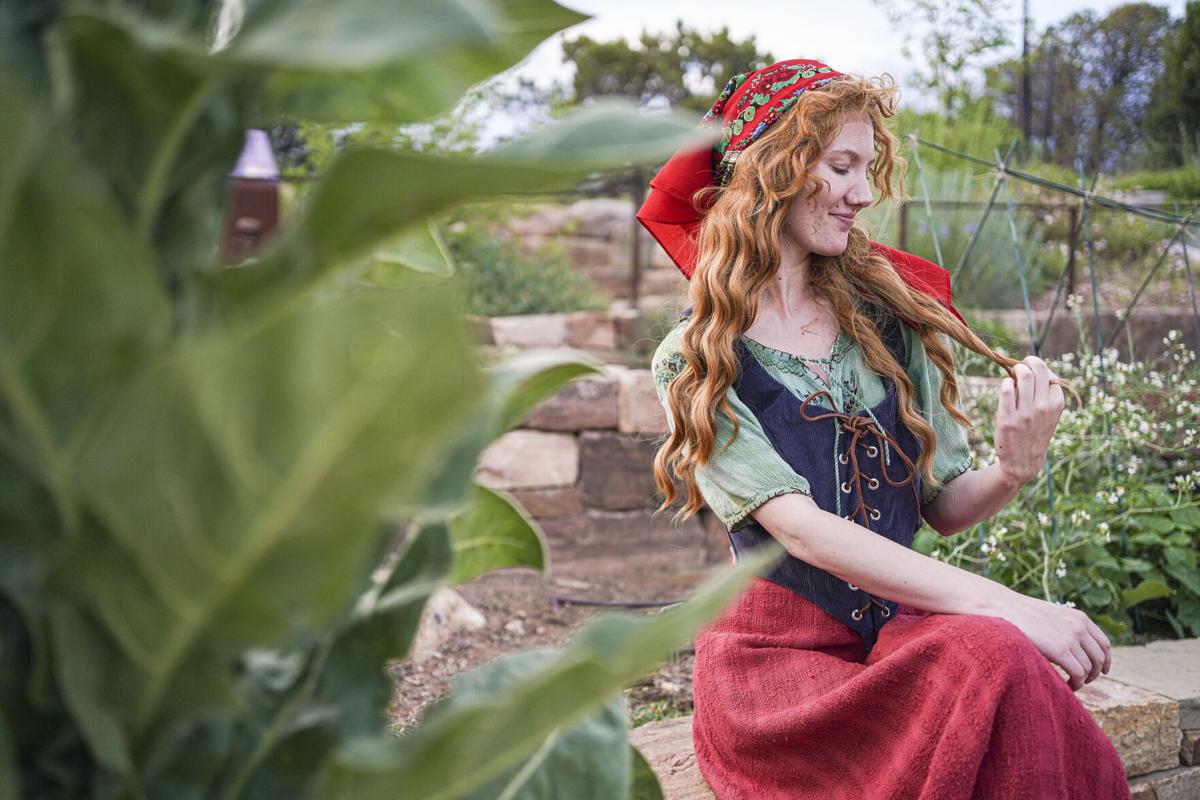 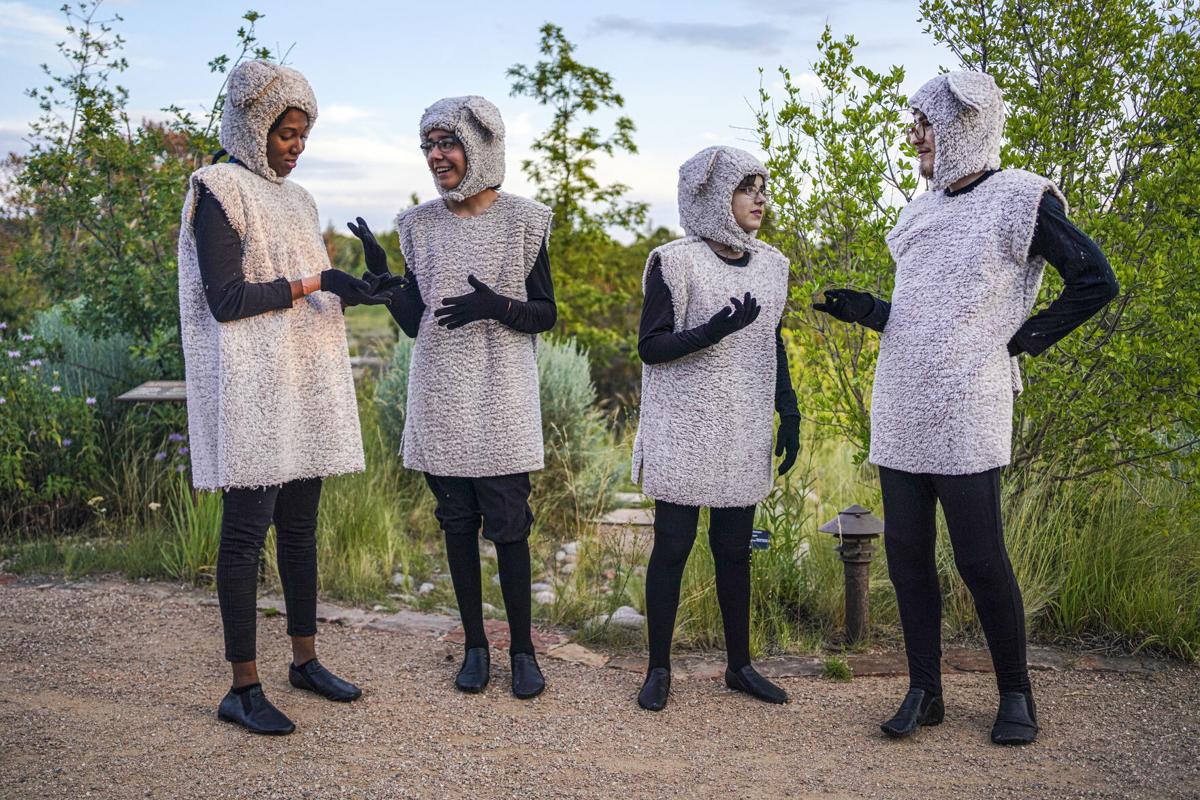 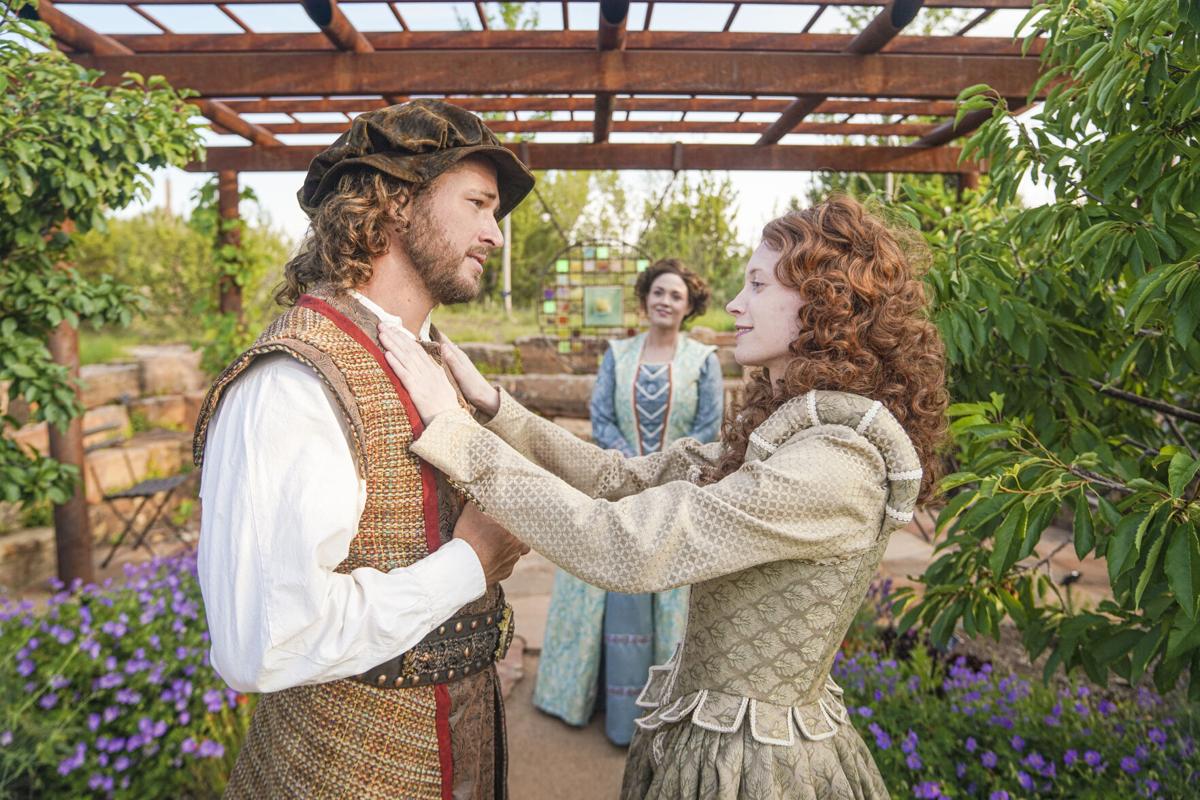 Hania Stocker (Orlando) and Emily Rankin (Rosalind) rehearse a scene at the Santa Fe Botanical Garden for the Santa Fe Classic Theater performance of As You Like It; photo Gabriela Campos/The New Mexican 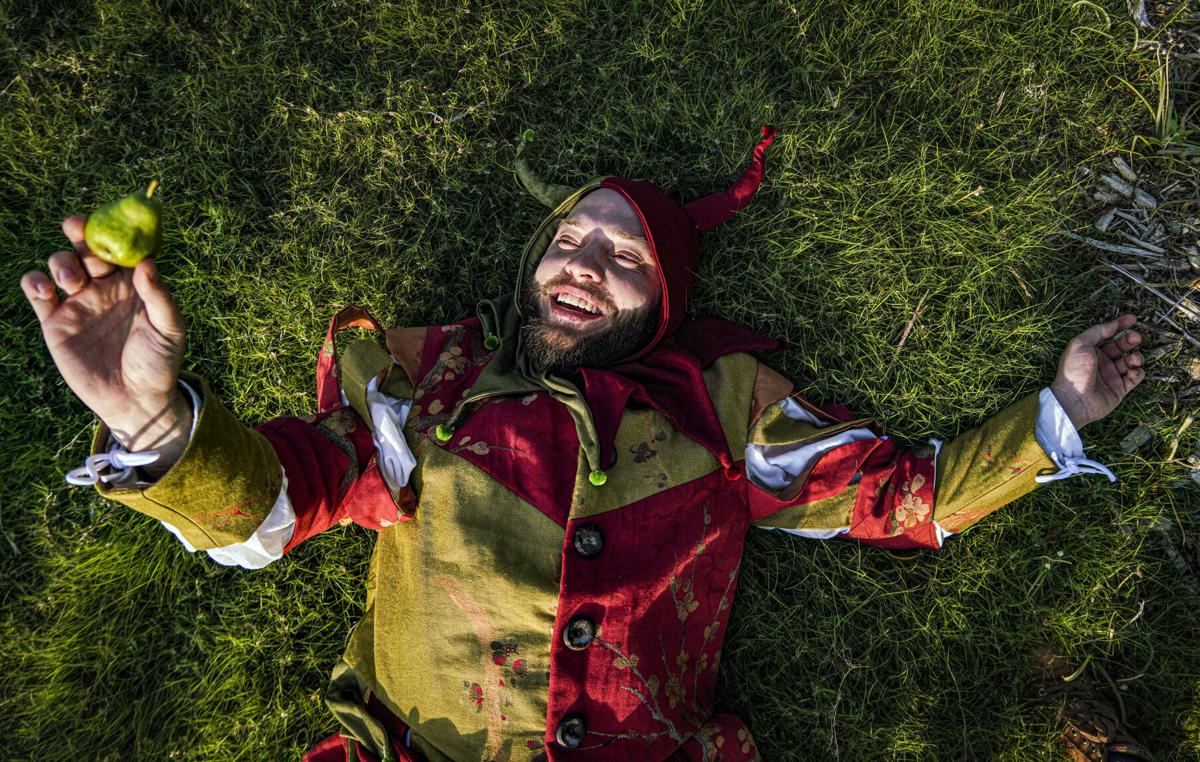 Emily Rankin as Rosalind (right), and Joey Beth Gilbert as Celia, rehearse a scene for As You Like It amongst the lavender at the Santa Fe Botanical Garden; photo Gabriela Campos/The New Mexican

Hania Stocker (Orlando) and Emily Rankin (Rosalind) rehearse a scene at the Santa Fe Botanical Garden for the Santa Fe Classic Theater performance of As You Like It; photo Gabriela Campos/The New Mexican

William Shakespeare created some of literature’s most complex women, including Portia, Desdemona, Kate. Often these wily, intelligent characters rebel against powerful men in the name of love, romantic, or otherwise. In the process, they come to understand their own worth and — at least in the comedies — marry the men they desire. But such growth is generally reserved for the ruling class. Shakespeare’s working-class women seem to get saddled with men who pursue them, regardless of their feelings.

Not so in Santa Fe Classic Theater’s production of As You Like It, opening at Santa Fe Botanical Garden on Thursday, July 29. Although many characters fall in love at first sight in the play, not every relationship is treated as equal. Co-directors Patrick Briggs and Kelly Kiernan wanted to give some of the female characters more agency, so they looked carefully at the text to find what they needed. They say that one of the reasons for Shakespeare’s timeless appeal is that there’s always something new to find in his densely poetic language.

The married couple trained with the Stratford Shakespeare Festival in Kiernan’s hometown of Stratford, Connecticut, and have been acting in and directing outdoor summer Shakespeare for about 30 years. They focus on making the language understandable and enjoyable for audiences. “We’re not dumbing it down, but there’s a way to play the text so the audience knows what’s being said,” Kiernan says. “So often, an actor is giving a Shakespearean speech, and you have no idea what they’re saying. It’s about an emotional connection, and that’s what we try to fuel our approach with — a visceral and immediate energy.”

The main plot of As You Like It concerns Rosalind and Celia, who are cousins and best friends. Rosalind’s uncle, Duke Frederick, banishes her from the royal court to the Forest of Arden because he fears the public adores her more than his daughter. But Celia loves Rosalind so much that she abandons her authoritarian father to stick with her cousin. The directors set the play in the 1590s, which is when it was written, but have located the court and the Forest of Arden in Spain. Costume designer Cheryl Odom dressed the women in the court in corsets and dark colors. While in the forest, garments are looser and lighter. There, the play features live music and several song and dance numbers.

For safety, as well as out of a sense of adventure, Rosalind disguises herself as a young man, Ganymede. Celia transforms into a farm girl, Aliena. Rosalind’s genderplay causes confusion among the forest residents, as well as for her true love, Orlando. But the pair shares an intellectual connection that grows during the play, even while Orlando thinks he’s getting to know a man. Their connection results in a believable love story, despite Shakespeare’s shenanigans.

“When we first see Rosalind, she’s very intelligent, but she’s in court, so she’s having to behave in a certain way and follow the unspoken rules of behavior at court,” says Emily Rankin, who plays Rosalind. “I love that we get to see her go to the forest, dressed in men’s apparel, and have this moment of realization that she can kind of say anything and do anything.”

Briggs and Kiernan wanted to make it similarly believable for an uneducated shepherdess, Audrey (Hannah Machado Parker), to want to wed Touchstone (Hamilton Turner), an often-crude court jester who lusts after her. Though many productions simply marry Audrey off to this random man at the end without much commentary, Kiernan and Briggs believe Audrey chooses Touchstone because he offers her a better life in the court. She will also have more presence in the play than most productions afford her, remaining on stage throughout to tend her flock — churro sheep played by Ortiz Middle School students.

And in this interpretation, Phoebe (Zoe Burke), another shepherdess, doesn’t merely settle for the desperate Silvius (Noah Segard), who is hopelessly in love with her. “Phoebe is a firecracker who knows her worth. She’s not going to settle, so it’s less about her being forced to marry this derpy guy that she has no interest in, and more a process of realizing something that she hadn’t valued before. It’s a unique interpretation, and really interesting to play,” Burke says.

But how do actors convey these subtle nuances to an audience, when Shakespeare’s words remain the same? Body language plays a big role, as do breath work and gaze, says Burke, who is also the production’s intimacy director. She has specialized training in directing romantic scenes, in much the same way a fight director specializes in choreographing sword fights or hand-to-hand combat for the stage.

“Unlike fight direction, there is skin-to-skin contact,” Burke says. “So, we’re making sure we’re negotiating boundaries for our actors, making sure if an actor says they don’t want to be touched here or don’t want to perform this interaction in this way, then we can negotiate with the actors and directors to find a solution that makes everyone happy and comfortable, and still tells the story.”

As theaters reopen from the pandemic shutdown, health rules continue to change. When Kiernan and Briggs were first planning the production, they anticipated having actors in masks, standing at least six feet from one another. In this case, intimacy concerns weren’t about contact but about a lack of it. How do you telegraph love at first sight when the characters can’t even touch each other? “A big dramatic sigh, falling back against a tree, and sharing that moment with the audience,” says Burke, who adds that performing in a large space like the Botanical Garden’s amphitheater will always mean having plenty of room between the actors, even now that restrictions have been lifted. “If you have too many actors too close together for too long, it just looks muddled. So, we do a lot of exercises to help the actors build the appearance of chemistry.”

Briggs and Kiernan decided to work with an intimacy director because they both came of age in theater when actors were expected to develop their own chemistry, which could be awkward or even painfully uncomfortable. A director’s advice sometimes boiled down to telling a pair of actors to “go make out,” Kiernan says.

“By bringing Zoe in, it’s heightened my awareness, as a director, of the emotional needs of actors,” Briggs says. “I can be a little straightforward. Like with Romeo and Juliet [which Santa Fe Classic Theater produced at the Botanical Garden in 2019], they have the kiss at the beginning, when they fall in love. I was not very sensitive to those actors. I’m sorry for that, but now I’m much more aware of it.”

Outside of its love stories, As You Like It contains many topical themes, including political insurrections, estranged royal brothers, and men who wield power with spite and jealousy. At least in the comedies, Shakespeare doesn’t usually provide much justification for all this hatred and violence. We don’t know why Duke Frederick hates his brother, Duke Senior (both played by John Shannon), other than that he grew up in his shadow, Briggs says. Nor do we know why Oliver (Miles Blitch) hates his brother, Orlando (Hania Stocker), to whom Oliver has inexplicably denied an education and his rightful inheritance. Sometimes the characters find forgiveness or redemption, and sometimes they don’t. Sometimes, like Duke Frederick, they suddenly find religion.

“It doesn’t matter when you set it, Shakespeare was writing about complex characters that ring true, no matter what point in time you are,” Kiernan says.

Another one of Shakespeare’s oft-returned-to themes is escape from the everyday into a world where standard roles and decorum don’t apply. Rosalind going from the court to the forest, changing from courtly dresses to rustic dungarees is reminiscent of women shifting from officewear to loungewear during the pandemic, as white-collar work shifted home. Although Briggs and Kiernan selected As You Like It well before the pandemic, Kiernan says they couldn’t have made a better choice, “because of the celebration of love, and love overcoming oppression. And I think a lot of people found, in the pandemic, that when they were released from the structures of the workaday world, they had time to step back and realize what was important.”