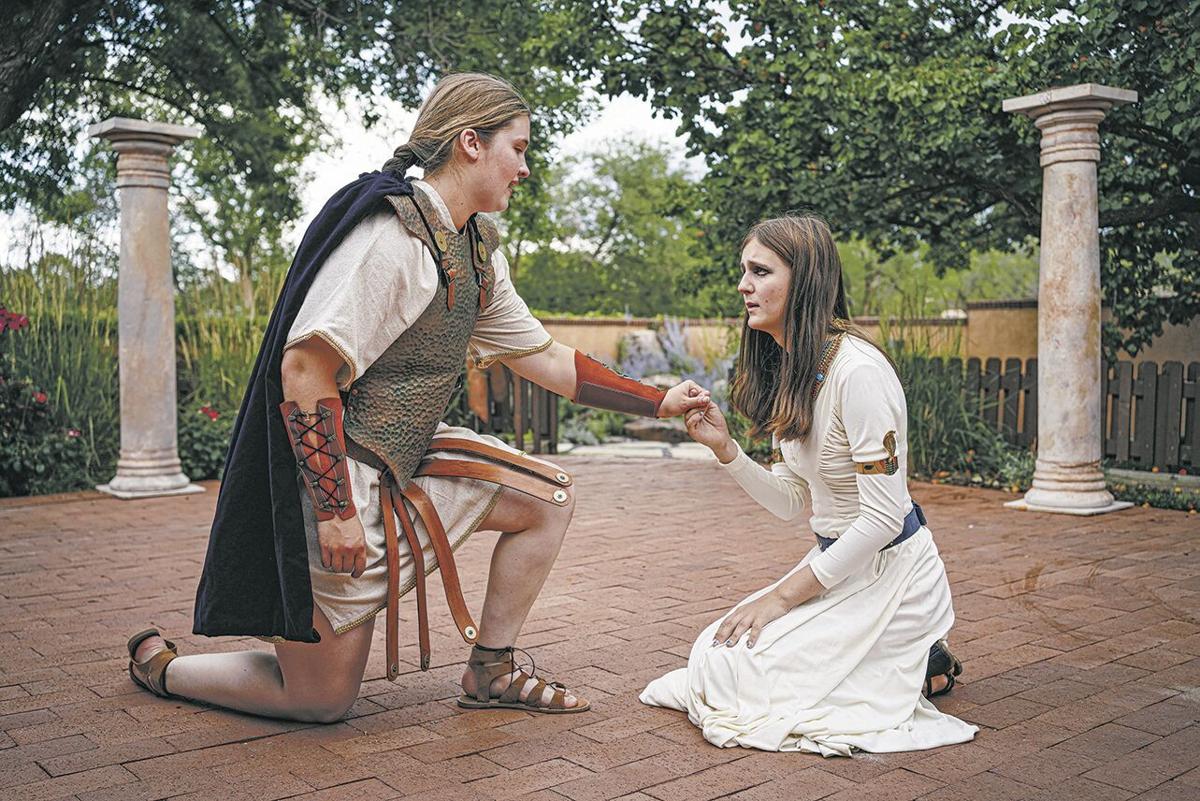 Zoe Marriner, in the role of Mark Antony, and Ashlinn Barber-Woeltjen, as Cleopatra 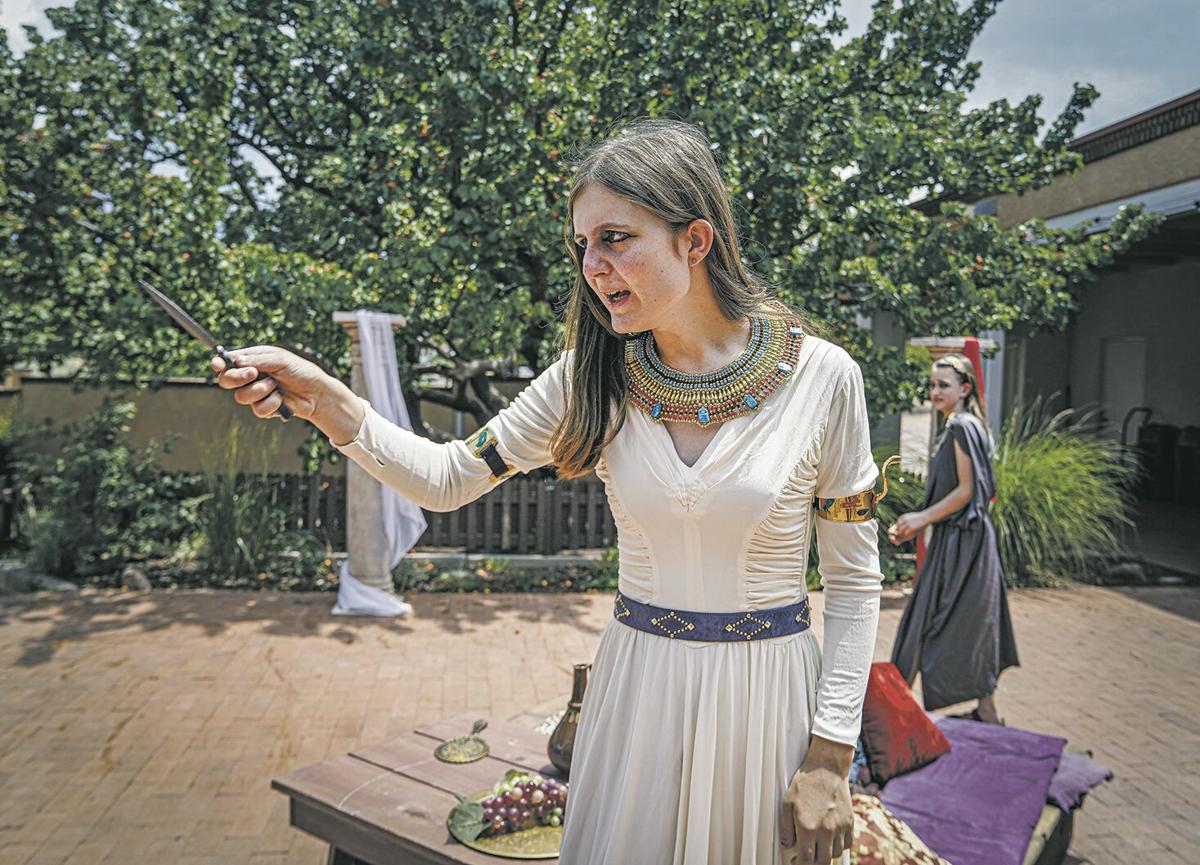 Zoe Marriner, in the role of Mark Antony, and Ashlinn Barber-Woeltjen, as Cleopatra

The Upstart Crows have their lines memorized through Act I, scene 8 of Antony and Cleopatra. It’s late June, still more than a month until opening night, and they’re shivering through a chilly afternoon’s rehearsal in a church courtyard.

“I have said?” Rosen’s voice goes up at the end, as if the line is a question. But Farkas needs something else.

“Say, ‘I’m done,’” she says. “Like, ‘I’m finished. I’ve already said this.’” Rosen nods, and says the more modern phrase successfully. But when they return to the scene, her voice lifts again. The other members of the cast laugh, as does Rosen.

For the Upstart Crows, Shakespeare is all about process. The youth theater group is non-hierarchical, say its members, and they’re there to learn. That means everyone who signs up gets a part, the older kids help out the younger ones, and the spirit of competition is conspicuously absent. But it’s a serious commitment. During the summer, they rehearse five days a week and even the smallest parts mean memorizing at least 60 lines of dialogue.

“I guess we’re all pretty geeky,” says Ashlinn Barber-Woeltjen, 17, who is playing Cleopatra and serving as assistant director. This is her 17th production with the Crows. She joined when she was 11, taking on a number of roles in Julius Ceasar.

“I was interested in learning more about Shakespeare,” she says, “and I really wanted to stab someone.”

Antony and Cleopatra is the story of Mark Antony, co-ruler of the Roman Empire, his paramour, Cleopatra, Queen of Egypt, and Octavius Caesar, the future Emperor of Rome. The adaptation the Crows are staging distills 42 characters into seven, some of whom are composites, and (spoiler alert) about half of whom die at the end. It’s a difficult play even for adults to grasp, so before rehearsals ever begin, the Crows start with a close read of the text. This one took place from the beginning of February through the end of April on Zoom, where they gathered regularly during the pandemic. They did online performances and theater activities for more than a year, but everyone was relieved when they could hold in-person rehearsals once more.

The goal of the close read is to make sure the cast understands the story and the characters. Now that they have a chunk of their lines memorized, Farkas has them run through each scene, listening closely to hear who might be omitting words or struggling with syntax and cadence. If read strictly for meter, Shakespeare can sound like bouncy nonsense, so it’s important that the actors have a sense of what the lines mean.

They move from scene 8 to the unmemorized wilds of scene 9 — a conversation about drunken exploits between a soldier, Enobarbus (played by Ashlinn’s younger sister, Juniper Barber-Woeltjen, 15) and Thidias, a member of Caesar’s party (played by Ziv’s brother, Faith Rosen, 10). Casting is gender blind; roles are given to whoever is right for the part.

“She made Caesar’s father lay his Sword to bed / He ploughed her and she cropp’d,” Rosen says. He makes a face and shrugs, unsure of his delivery.

“Do you know what your character is saying?” Farkas asks.

Rosen shakes his head. Farkas carefully explains that he’s talking about Julius Caesar having had sex with Cleopatra, and he’s not being very kind to the queen. She uses age-appropriate euphemisms that don’t make anyone blush or laugh. Given how ribald Shakespeare can get, it’s a skill Farkas has had to develop during her 20 years working with children.

“I come at it by starting with the character’s motivation,” she says later. “With Faith, [I told him] Thidias was being dismissive and derisive, using coarse language to disrespect Cleopatra, to put her down and reduce her to a sexual object. We’re not getting graphic. We’re not getting into mechanics. We’re talking about intention.”

The older actors convey a firm grasp of the material, playing up the drama and humor in their lines. Ian Gonzales, 15, is especially confident as Caesar, swaggering into the courtyard with all the authority of a real emperor. During a 15-minute popsicle break, Ashlinn Barber-Woeltjen joins Gonzales and Zoe Marriner, 18, under a portal to talk about their characters. Cleopatra is volatile and manipulative, and she puts on different facades for different people, Barber-Woeltjen says. With a great deal of hesitation, she confirms that Cleopatra loves Antony.

“But it’s not a healthy relationship,” Marriner finishes for her. She’s playing Antony, who she describes as “not as clever as Cleopatra and fairly abusive to his servants.” She calls him a “party boy.” Marriner has been acting with the Crows since she was 11. Her twin brother joined first, and though initially she had no interest, she changed her mind after helping him run lines for Julius Caesar.

“I realized that I also knew the lines, and that I liked memorizing lines, so I signed up,” she says. “I stuck with it because of the community. Everyone is really kind and helpful.”

This is Gonzales’s second full production with the Crows. The veteran of local youth theater considers the Crows community a “gem,” full of people he’s grateful to have gotten to know. He says that Caesar is pompous and sure of himself. “Every word that comes out of his mouth is specially crafted where he knows it’s going into history books, because it is. He’s the most powerful man on Earth, and he knows it. He has the power to do whatever he needs to do. He’ll got to war with Antony if he has to, which he does.”

The three leads explain that usually the plays are double- or even triple-cast, but this summer, many families made travel plans as soon as COVID restrictions were lifted. While they appreciate the smallness of the cast and the extra personal attention they’re getting from Farkas, they miss the bustle of the big group. Having two or three people play the same role on alternating nights is also creatively stimulating, because you get to see other people’s ideas.

“You build your own character, but you can steal from other people if you see something good,” Marriner says.

None of them are intimidated by the difficulty of the material. In fact, delving, learning, and attempting to conquer it enough to perform it are the only goals. Mastery is just a hazy dot on the horizon. “You get better over time,” Barber-Woeltjen says. “I enjoyed acting a lot, at first, but I didn’t get super deep into the text. But the past experience from other plays is definitely a huge thing. I’ve been in Julius Caesar twice, and since this play is pretty much a direct sequel to Julius Caesar, I feel like my experience from there has helped a lot with the way I understand this play and the characters.”

“We just do our best, whatever our best is at that point,” Marriner says. “It changes, the more plays you do, and as you get older. So, when you first start, your best is definitely not quite there yet. [Farkas] is really good at giving us roles that help us develop our acting skills but aren’t too hard to portray in a way the audience will understand. You try your best and try not to compare yourself to other people.”

A few weeks later, Ziv Rosen is still struggling with the line “I have said.” Her voice still interprets it as a question. But then, she accidentally substitutes with “I’m done.” Her emphasis is perfect and the cast cheers. It’s not Shakespeare’s English, however, and Farkas has her do it over.

▼ Androcles and the Lion