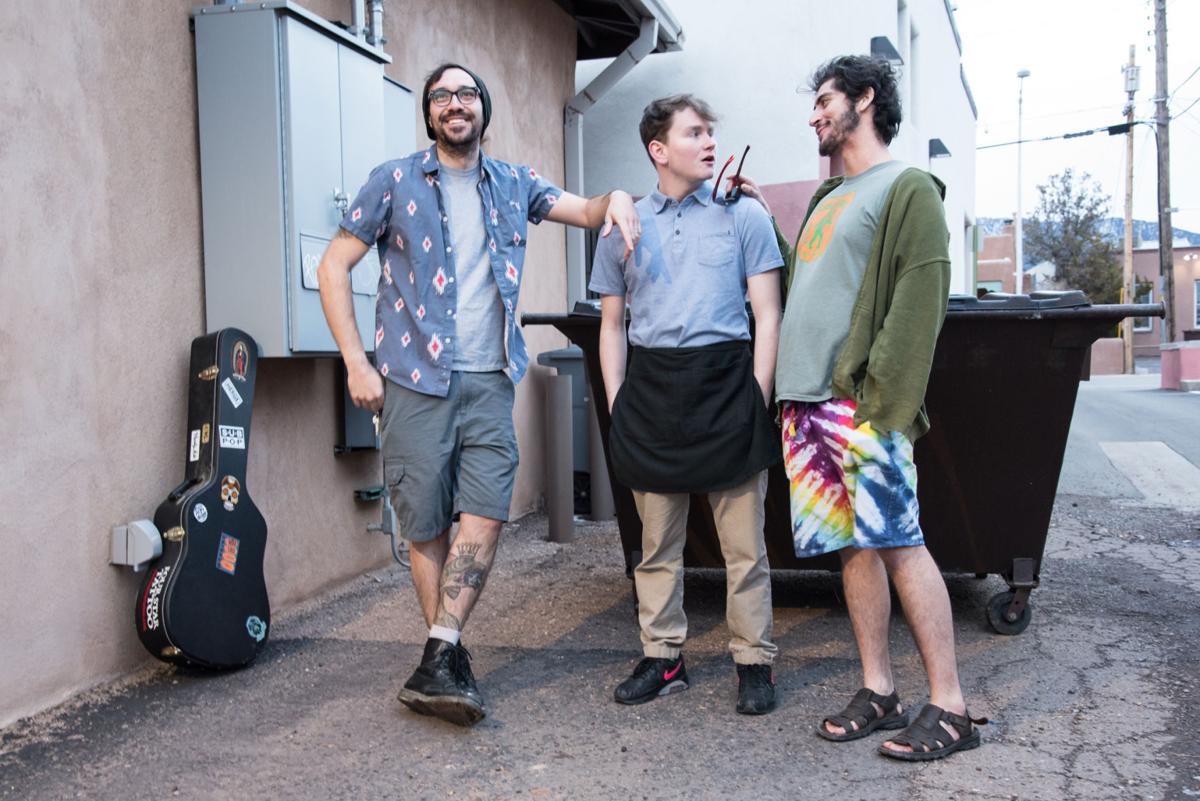 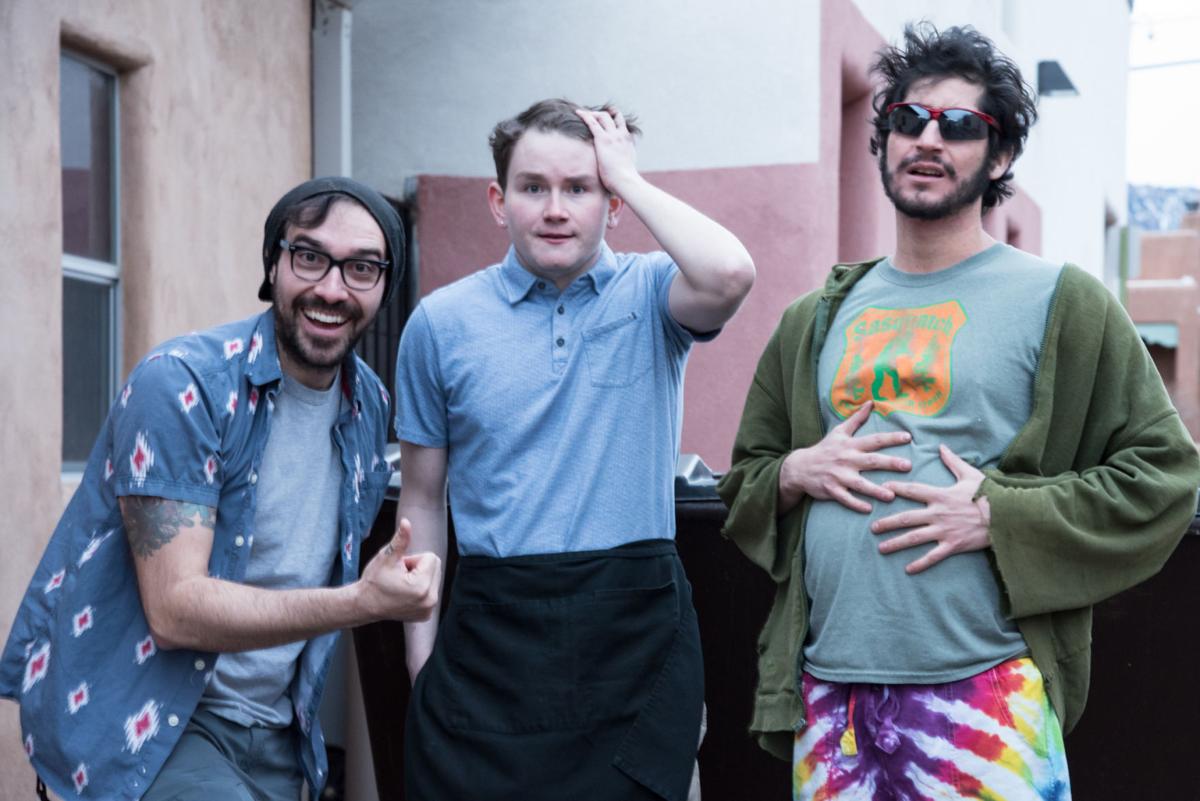 KJ and Jasper have slid into their 30s without much to show for it. In Annie Baker’s play, The Aliens, the two men lounge for hours on picnic tables behind a Vermont café, writing and playing music together, and talking about the mysteries of life, love, and the universe. Management doesn’t want them back there, but KJ and Jasper don’t heed such petty rules. They’re not dangerous (at least not to others). They’re just sort of drifting.

The Aliens, which opened March 5, is the first play in Ironweed Productions’ 2020 season. It runs through March 22 at Teatro Paraguas Second Space.

This is Ironweed’s 15th season — a tremendous achievement for a theater company that operates without a permanent performance space to call its own. Over the years, Ironweed has put on plays at Santa Fe Playhouse, El Museo Cultural de Santa Fe, Teatro Paraguas, and, once, at Second Street Brewery at the Railyard. Ironweed’s past productions include Sam Shepard’s Fool for Love in 2005, David Mamet’s American Buffalo in 2011, Sam Shepard’s Buried Child in 2013, and Arthur Miller’s Crucible in 2017.

Harrison is the son of a military man, and his family moved around a lot. Often uprooted, young Scott perpetually wondered when he would land in a place that he could truly call home — and what that even meant. He found diverse depictions of home and family in the works of playwrights like Shepard. When he started Ironweed Productions in Santa Fe in 2005, he didn’t intend to helm a long-running theater company. He just really wanted to do Shepard’s Fool for Love, and maybe a few other shows. But audiences responded with praise for the quality of the productions, so Harrison kept going.

“Once we started to do one play a year, we focused on American plays,” Harrison says. “And then, around 2015, people started saying, ‘You’re Ironweed; you do classic American plays.’ ”

He groans at the word classic and names some contemporary works that he’s produced, including Doubt: A Parable by John Patrick Shanley, in 2008, and Good People by David Lindsay-Abaire, in 2014. Despite knowing that this public perception of Ironweed’s offerings was accurate, he balked at the idea that he exclusively produced classics. He’d never meant for that to happen. What’s more, some people pointed out that he only selected plays written by white men — a narrow slice of the American experience, classic or otherwise.

In 2018, Harrison put together a new artistic team to help him steer Ironweed. With Santa Fe theater community regulars Lynn Goodwin, Kate Kita, Dan Piburn, and Matt Sanford on board, he started sharpening the mission. “If we’re going to do the American experience, then let’s dig in and look at the diversity of the American experience. There are a ton of voices out there,” he says.

This new track led Ironweed to produce Water by the Spoonful as part of 2019’s Elliot Trilogy, in which three Santa Fe theater groups collaborated to present a trio of award-winning plays by Puerto Rican playwright Quiara Alegría Hudes. Women wrote both plays selected for Ironweed’s 2020 season: The Aliens, and a dark comedy about pregnant women, Cry It Out, by Molly Smith Metzler, which opens in the fall.

The Aliens, which premiered off-Broadway in 2010, is one of Obie Award-winner Baker’s Vermont Plays, a collection of four stories set in a fictional small town called Shirley. It’s a strongly character-driven piece with a plot that hinges on an unanticipated tragedy. (Saying much more would be a spoiler.) The play takes its title from a poem by Beat writer Charles Bukowski (1920-1994), in which he describes people who go through life with very little strife or trouble — and says he will never be one of them.

Though Bukowski’s reputation for misogyny in his work and in his personal life remains robust, his transgressions never seem to eclipse his literary legacy. Generation after generation of young men read him and his peers, many of whom are referenced in the play. While KJ and Jasper are definitely fans of the Beat era, Baker reveals in small but pointed moments that these modern men have somewhat more nuanced feelings about their mothers and girlfriends. What lingers from the days of Jack Kerouac, however, is the looming threat that life is ultimately nothing but suffering in quiet desperation — the very thing the Beats were rebelling against.

Matt Sanford would say that, like his character, Jasper, Bukowski’s flaws were not the depth and breadth of who he was as a human being. He says that, like the Beats were, Jasper is wrestling “with the duality of isolation and acceptance. Where do you fit in? And where do you not fit in? How much of that is a societal perception of who you are as an individual?”

As for KJ, he’s trying to perfect a circle of friendship between himself, Jasper, and a 17-year-old café employee named Evan (Mickey Dolan), says Niko’a Salas, who plays KJ. “He’s trying to create a family. He’s kind of forcing the situation, but in a beautiful way. He sees beauty in everything.”

Director Lynn Goodwin says that unlike the Beats they look up to — men who took to the open road, lived hard, and grabbed life by the throat — “KJ and Jasper don’t leave this fenced-in area behind the café. They don’t know what to do or where to take themselves. They don’t go on adventures, but neither did most men [in the 1950s and ’60s]. Not everyone gets to have the adventures they want to have.”

Until you spend time with people, Harrison says, you don’t always know what gifts they have. You don’t know their hearts, or what made them the way they are, or what kind of secret thoughts they have. “You could look at KJ and Jasper and define them as burnouts or outcasts — but then you learn about who they are, their relationships with each other, and their fears. And the talents and the creativity that they have. To me, it speaks to how important it is, with the place we are in the country, to look beyond the surface of the people that we’re with and find the connections between us.”

Goodwin underscores Harrison’s point with a quote by Baker from a 2014 interview she did about The Aliens in Vice magazine: “I do believe that everyone is a genius. Or you could say it the other way: No one is a genius. Every single person on this planet is a genius and an idiot. So maybe those characters are a way of trying to explore all the different ways any given person you walk by on the street could be brilliant and also deluded and insane.” ◀

The Aliens, presented by Ironweed Productions

Scott Harrison, artistic director of Ironweed Productions, looks back at a selection of plays from the company’s 15 years.