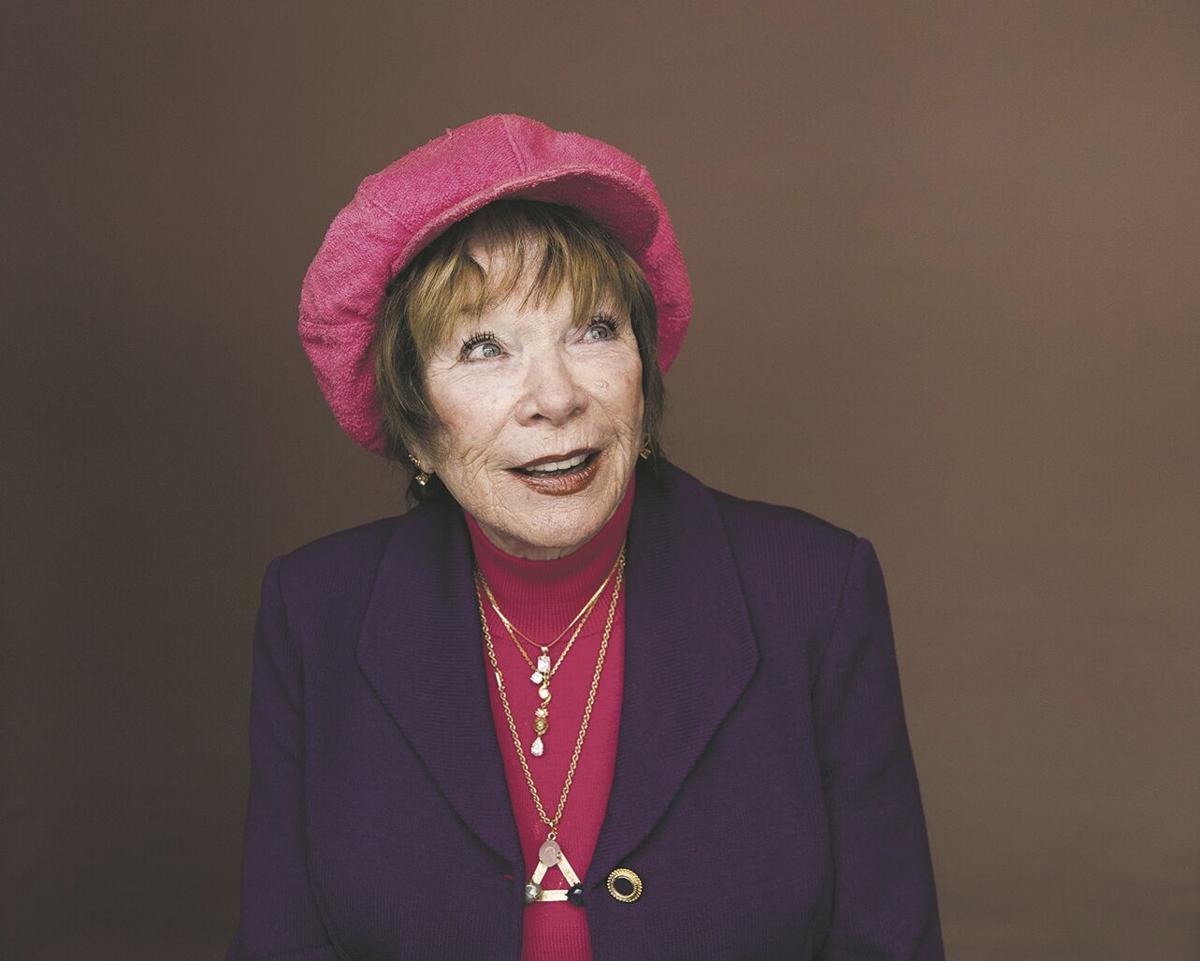 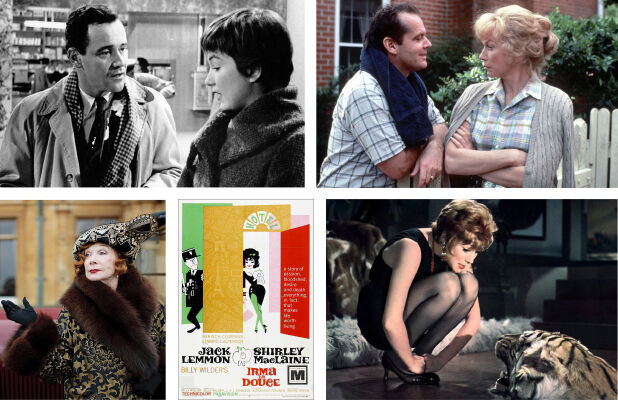 Clockwise from top left, Shirley MacLaine and Jack Lemmon in The Apartment (1960); MacLaine's Oscar-winning performance in Terms of Endearment (1983) alongside Jack Nicholson; MacLaine in Sweet Charity (1969); and MacLaine as Martha Levinson in Downton Abbey (2012-2013)

Clockwise from top left, Shirley MacLaine and Jack Lemmon in The Apartment (1960); MacLaine's Oscar-winning performance in Terms of Endearment (1983) alongside Jack Nicholson; MacLaine in Sweet Charity (1969); and MacLaine as Martha Levinson in Downton Abbey (2012-2013)

The presidential oath is done, the speeches made, and the band packed up. And Shirley MacLaine is looking to the future — and the past.

“I’m feeling hopeful but fundamentally realistic,” she tells Pasatiempo. “So, let’s just see how that all goes.”

On Feb. 11, MacLaine will appear in a virtual gala program for the Cancer Foundation of New Mexico’s 16th Annual Sweetheart Auction. It’s the culmination of a weeklong celebration that includes a raffle for a dream vacation and the auction of 425 lots with an estimated total value of nearly $500,000.

“God, I just thought that with the world as mixed up as it is and things going awry, I would get involved,” says this child of Richmond, Virginia, who has lived in Santa Fe since 1990.

To date, MacLaine has written 15 books (many relating to her New Age beliefs). She’s also appeared on TV, in stage productions, and in more than 60 films — six of which scored her Oscar nominations.

But it seems that she has always been in show business. MacLaine began ballet lessons at age 3, graduating to the chorus of Oklahoma! at 16, and then small dance roles on Broadway: first, in the ensemble of Me and Juliet in 1953 and then, in 1954, as an understudy for actress Carol Haney in The Pajama Game. In what MacLaine might call meant to be, producer Hal B. Wallis happened to see her the night she stepped in for Haney and signed the recent high school graduate to Paramount Pictures.

Here, MacLaine, who is “almost 87,” is everything you’d expect her to be. Thoughtful, irreverent, candid, contradictory, funny, and yes, surprising, as she talks about her career and life.

Pasatiempo: I understand that you’re shooting a film now.

Shirley MacLaine: No, I’m prepping something and then we will see what happens with the virus and the protocol. We don’t know. We’re in a state of uncertainly, to tell you the truth. ... I’ve got three or four pictures to do that got backed up. We’re determining locations and all that stuff.

Pasa: COVID has upended the whole world. How are you dealing with it?

MacLaine: I just got back to California, so I’ve been there in New Mexico for almost a year, basically isolated. But there, I’m absolutely surrounded by beauty and by loving friends and by a promise I keep making to myself that I get to know who I am and know who I’m not — better. ... And on this Inauguration Day, it’s a new start.

(She pauses.) And I’m finding myself getting more polite with people.

Pasa: Really? Why is that?

MacLaine: Isn’t that interesting? And I’m not so disciplinarian-istic, short-tempered.

Pasa: Because of COVID?

MacLaine: Damned if I know, but I think so. I think I’m just fundamentally ... I guess I’m practicing what I preach, you know? If I’m saying let’s all get along better, then I have to do the same thing.

Pasa: Your first film was The Trouble With Harry in 1955. What was it like working with Alfred Hitchcock right out of the gate?

MacLaine: Look, I’d barely heard of him. I was just a year and a half out of high school and in the chorus of a Broadway show. So, I had not been to many movies and had not even thought in terms of working in movies.

What Hitch became for me was an eating partner. You know, we shot in Vermont because it had a great restaurant there. And he wanted me to eat every meal with him because I ate more than he did. In fact, the president of Paramount called me and said, “Look, you’ve gained 35 pounds. We can’t match your shots. So, do you want to be a has-been before you even begin?” (She laughs.)

Pasa: He’s known for being tough on actors. I guess that wasn’t the case with you.

MacLaine: Well, I was not tall, thin, blonde, and ethereal either. But my attitude and stuff was, OK, let’s eat the food. (Laughs.) And that’s the way I approach scenes. I memorized everybody’s parts and was always on time and did all the stuff you expect.

Pasa: Now, you won a Golden Globe for Best Newcomer/Female for The Trouble With Harry and I’m wondering ...

Pasa: (Laughs.) You did. (Laughs again.) Well, I was going to ask you about the impact of the award, but I guess there wasn’t one.

MacLaine: No, it didn’t make any impact, really. My whole approach to life is do the work best I can and get on with it.

Pasa: Early in your career, you starred in quite a few films with important directors, including Billy Wilder, Vincente Minnelli, Robert Wise and, as a first-time director, choreographer Bob Fosse. Of those films, Wilder’s The Apartment was probably the most highly acclaimed at the time: It scored 10 Oscar nominations and five wins. How did Wilder deal with the sensitive subject of suicide?

MacLaine: He just said, “Action.” That’s all I remember. Look, we started the film with 29 pages of script. We had no rehearsal. We shot the end of the film first. You know, he was very (pauses) how should I put it? (pauses) He was extremely German. (Laughs.) Very good bold sarcastic jokery. “Let’s just get this job done” was his approach. I guess he was my big-time teacher. So I got the job done.

You know, I didn’t think that The Apartment would become as classic as it’s become, to tell you the truth.

Pasa: It was certainly a quirky film for the time.

MacLaine: I realized that it was comedy and drama, and we were excavating new entertainment territory there. I understood that. But I think something is left out in your comprehension about what you’re doing when you can’t seem to shoot in sequence. ... I didn’t know how it would end or what would happen. ... But it was fun, and I love Jack Lemmon. He was the best. And I tried to get Fred MacMurray to spend some money, but I picked up every check. (Pauses, then laughs.)

MacLaine: Oh, like your favorite auntie. Very, very, very nice. He was … I don’t know if he was unaware of his talent, but he was more involved in the process of being kind and generous and very understanding about things. I guess I took cues from Jack because he was older than me and so well-versed in comedy. You know, all comedy is based on some kind of tragedy. I didn’t ever really get into that with him, although he did drink. And we would spend hours after work— after shooting — talking just about life.

Pasa: He always struck me as an old soul.

Pasa: The rugged backdrop of Don Siegel’s Two Mules for Sister Sara [1970] was quite a departure for you. What got you into that film?

MacLaine: Probably the futuristic understanding that I would end up living in New Mexico. (Laughs.) ... That’s what everybody in town there remembers of me. Not The Apartment, but Two Mules.

Pasa: Oh, I didn’t realize it was filmed here.

MacLaine: No, it wasn’t. We filmed it in Mexico. But I’m in New Mexico, so I just forgave them. And they all loved Clint Eastwood.

Pasa: I would never have guessed that. I didn’t realize it was filmed here.

MacLaine: No, it wasn’t. We filmed it in Mexico. But I’m in New Mexico, so I just forgave them. And they all loved Clint Eastwood.

Pasa: You were nominated for Oscars so many times. Why did you think it wasn’t until Terms of Endearment in 1983 that you won?

MacLaine: (Pause.) Well, maybe I wasn’t good enough in the others to win.

Pasa: Was it joyful when you won?

MacLaine: Oh, fantastic, fantastic. One of the great moments of my life. I mean, as cliché as that sounds for me, yes. And then, you’re forever known as the Oscar winner.

Pasa: Many actors have spoken about the difficulty to find roles after a certain age. Has that been that true for you?

MacLaine: I think in my case … I think it’s about the same. What was harder was 40 to 60. After that, most everybody else had either quit or died or got married or something. (Laughs.) I mean, I’ve got these wonderful scripts to do. I’m really so very lucky. But somebody that’s a grandmother type has to do them, and it’s me.

Pasa: Did you ever picture yourself playing a grandmother?

MacLaine: Funny, I never pictured myself doing any of this. On the other hand, I knew it was all meant to be. It just all happened for me. And that’s an interesting thing to ponder. ... But I must say that being successful requires a certain amount to worry. I worry about is everybody else OK? Is the schedule ... I’m not holding it up? Are the others all right with me? I’m a worrier.

Pasa: That surprises me. Even with your spiritual outlook?

Pasa: You’ve received a lot of flack about your beliefs in reincarnation and other less-than-mainstream ideas. Did you have any concerns that Out on a Limb [1983], your first book on the subject, would derail your career?

MacLaine: (Laughs.) No, I’m a case in total lack of fear of humiliation. It never occurred to me. It never even occurred to me after people started making jokes. It was just what I believed and that

Pasa: That’s all I have, but was there anything you’d like to mention that I didn’t ask about?

MacLaine: Oh, hell, I don’t know. I’m just so blessed in living in New Mexico and that environment and that vibrational frequency and that beauty. I can’t tell you how lucky I feel. But then I don’t say anything is something I did. I say it’s luck. But I made the luck, didn’t I? ◀

To benefit the Cancer Foundation of New Mexico

For more details and registration, go to cffnm.org

The Apartment is my favorite Shirley MacLaine movie. She was great as was Jack Lemmon - another of my favorites from that era. She seems very resilient... and she's right. You do make your own luck, you just have to get on with it - whatever it is.

You can be both!