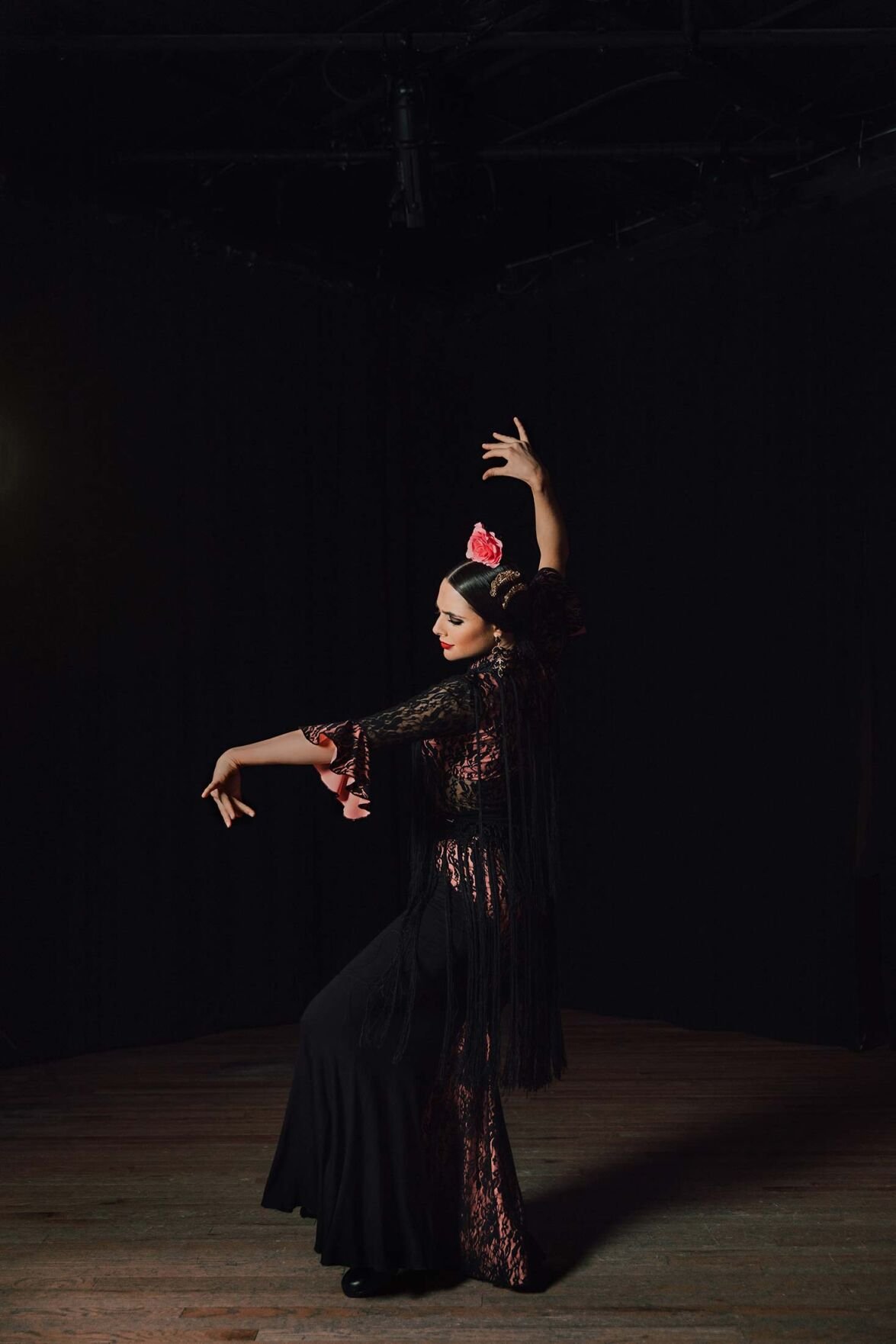 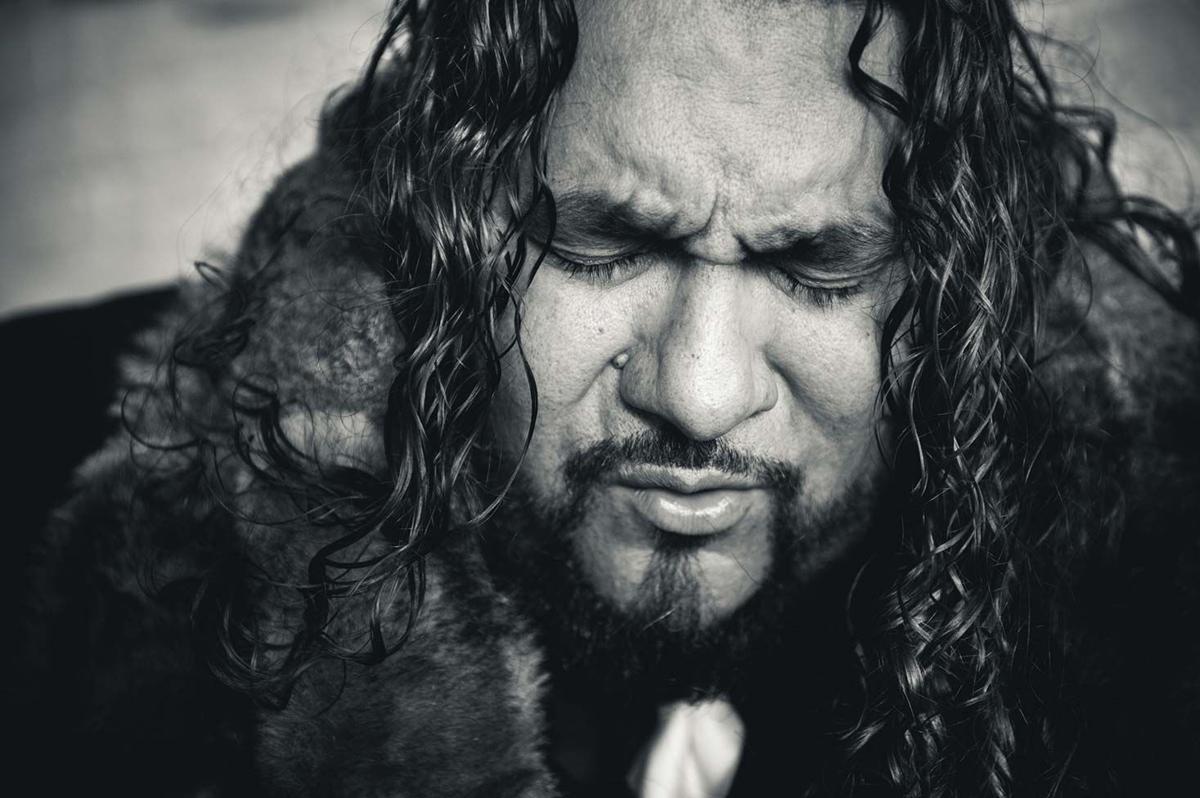 Emmy Grimm is now 30, but when she was 4, she began dancing with flamenco legend María Benítez and grew up in front of Santa Fe audiences. “Some of my first memories are dancing on the Plaza Bandstand during the Fiestas and Spanish Market,” says Grimm, known professionally as La Emi. She began performing with Benítez’ Next Generation youth company at 10, became a professional at 19, danced with every local flamenco group, and traveled to Spain during the winter for intensive studies and performing.This summer, she headlines at the Benítez Cabaret at the Lodge at Santa Fe through Sept. 5.

La Emi is not only the main attraction at the Benítez Cabaret; she’s the boss. She hired the company of dancers and musicians for the summer engagement, created the program, and sought choreographers to create several new dances. “I’m a product of the support of this community,” she says. “While many wonderful organizations closed their doors during the pandemic, we are still here. I’m doing what I love to do with people I love. What more can I ask for?”

Still, in a recent curtain speech for an invited preview audience at the Lodge, a member of the EmiArte Dance Academy board of directors made an appeal to the community. “She is doing 45 shows this summer in addition to teaching hundreds of flamenco classes. Our goal is to be able to afford to hire more teachers to help out. She needs a day off.”

Teaching was La Emi’s bread and butter before the pandemic, and during the lock-down, she was able to expand her reach through flamenco classes and lessons online. “It was important for my students — both adults and children — to keep dancing, for both physical and emotional health. A lot of families were suffering financially. We let everyone know that no one would be turned away for lack of funds. People were incredibly generous and sponsored others. There was an article about online dance classes on Google, and we were mentioned. Suddenly, there were students from around the country signing on.”

“On a typical week, we had 41 students in group classes and 15 taking privates,” La Emi says. “I invested in a sound upgrade, lighting, recorded music. It took a while to get to the point of professional video production, but eventually we got there.”

“I look at my little kids as aspiring professionals,” she says. “Even if they don’t become professional dancers, I want them to be unafraid to follow their dreams. I was blessed to have parents who told me, ‘Why do Plan B when you know what you love?’”

Performing with La Emi this summer is Vicente Griego, her godfather, and one of the most highly regarded flamenco singers in the country. “He has been touring the world as a flamenco singer for more than 20 years — longer than some of our corps dancers have been alive,” she says. Griego’s nickname is “El Cartucho,” which means cartridge in Spanish, as in a machine gun. He is a big man with a big voice, and he sings with unadulterated passion. Guitarist Gabriel Osuna, singer Olivia Rojas, and percussionist Javier Saumme will also perform. Solo dancers include Carlos Menchaca and Daniel Peregrino in addition to La Emi. The corps dancers (the “babies”) are Janira Cordova, Christina Salazar, and Cienna Chavez.

Today, La Emi is still years from her prime as a flamenco dancer, but she’s also no longer a child. Until now, she has wisely chosen solos that match her youth and vivacity, like the guajira, a feminine, flirty dance with Cuban roots. One needs to earn the right to perform some of the more intense dances by experiencing the darkness in life. Flamenco, after all, was promulgated by much-persecuted Gypsies. La Emi’s mentor, Benítez, was famous for her gut-wrenching rendition of the soleá, a flamenco form that Griego describes as “heavy … a cry, a testimony of life experience … the breath of life, or the last gasp of death.”

La Emi’s decision to take on the taranto this summer suggests that she has arrived at a more dimensioned womanhood. “In Spain, the tarantos were dances about miners who died underground. It’s about sorrow. It connects to my soul. I’m dedicating this taranto to my uncle Tom, who recently died of cancer.”

At the preview performance in July, La Emi not only showed her intensity but her sensuality. In the opening number, which uses a jazzy prerecorded piano score, the entire cast offers a Danza Española suite. The number was choreographed by Gala Vivancos, a Madrid-based dancer and teacher with whom La Emi traveled to study in 2020. “When I go to Spain, I choose a teacher instead of sampling all the different schools and teachers out there. I worked with Gala six days a week, six hours a day.” They continue to meet twice a week via Zoom.

Danza is a mix of folklórico, Spanish classical, and flamenco. “There is a lot of ballet technique, a lot of turns,” she says. Part of the Danza featured a duet with La Emi and Carlos Menchaca (the male soloists alternate this summer). Menchaca, who was a crowd-pleasing showman during his solos, came in close for this intimate duet, which featured minimal footwork, and was much more tactile than straight flamenco. Dressed in a pink dress with satin accents and a huge rose in her hair, La Emi was soft, sexy. The two dancers moved as an entwined unit. “There are lifts in the dance. I’ve never been lifted!” she says. At one point they stood face-to-face, seemingly moments away from a full-on, passionate kiss. “The goal is to show our versatility.”

La Emi refers to her journey in flamenco as “el camino,” the road. “You never stop studying. You never stop learning,” she says. “This is how I look at flamenco. It’s an art form from the streets, not royalty. It’s from real people. Flamenco is powerful because of the mysteriousness of the emotions being expressed on the stage. It’s the same with dancers, singers, guitarists. Every one of us is telling our entire life story every moment on stage. Flamenco is about the human experience.” ◀

▼ La Emi at the Benítez Cabaret