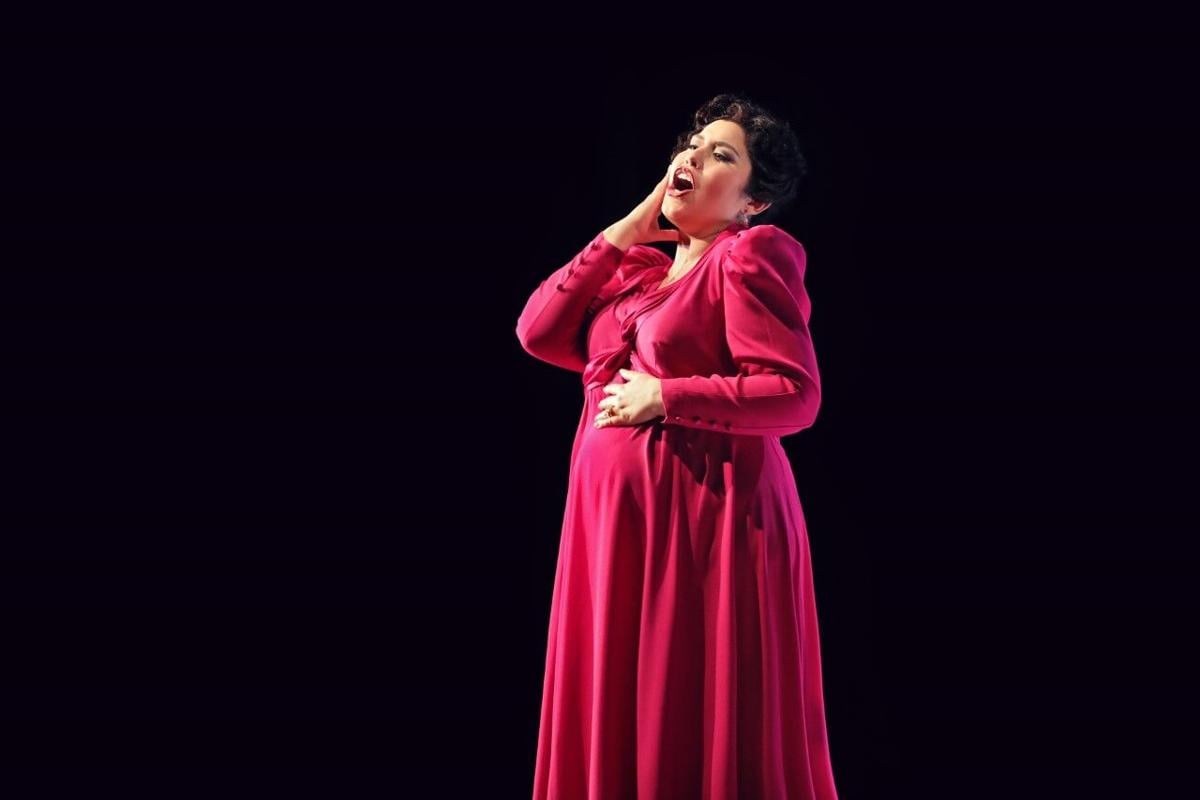 Vanessa Vasquez appears as Countess Almaviva in the Santa Fe Opera's production of The Marriage of Figaro. 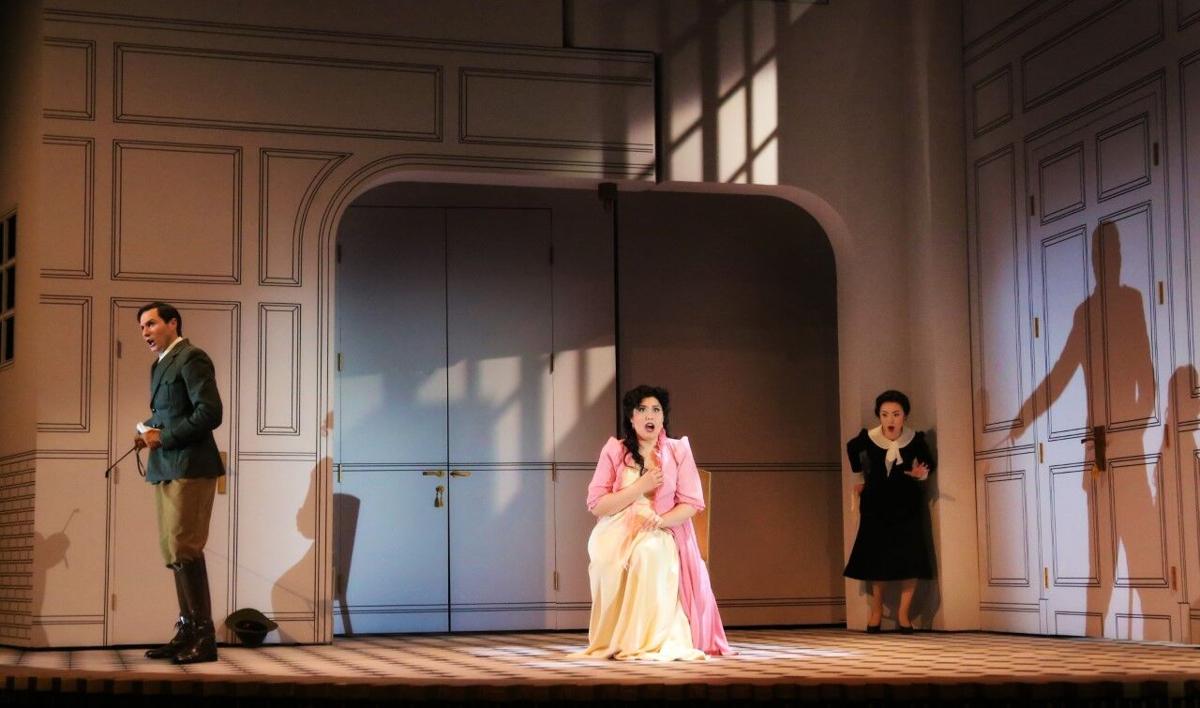 From left, Samuel Dale Johnson (as Count Almaviva), Vanessa Vasquez (as Countess Almaviva) and Ying Fang (as Susanna) appear in the Santa Fe Opera’s production of The Marriage of Figaro. 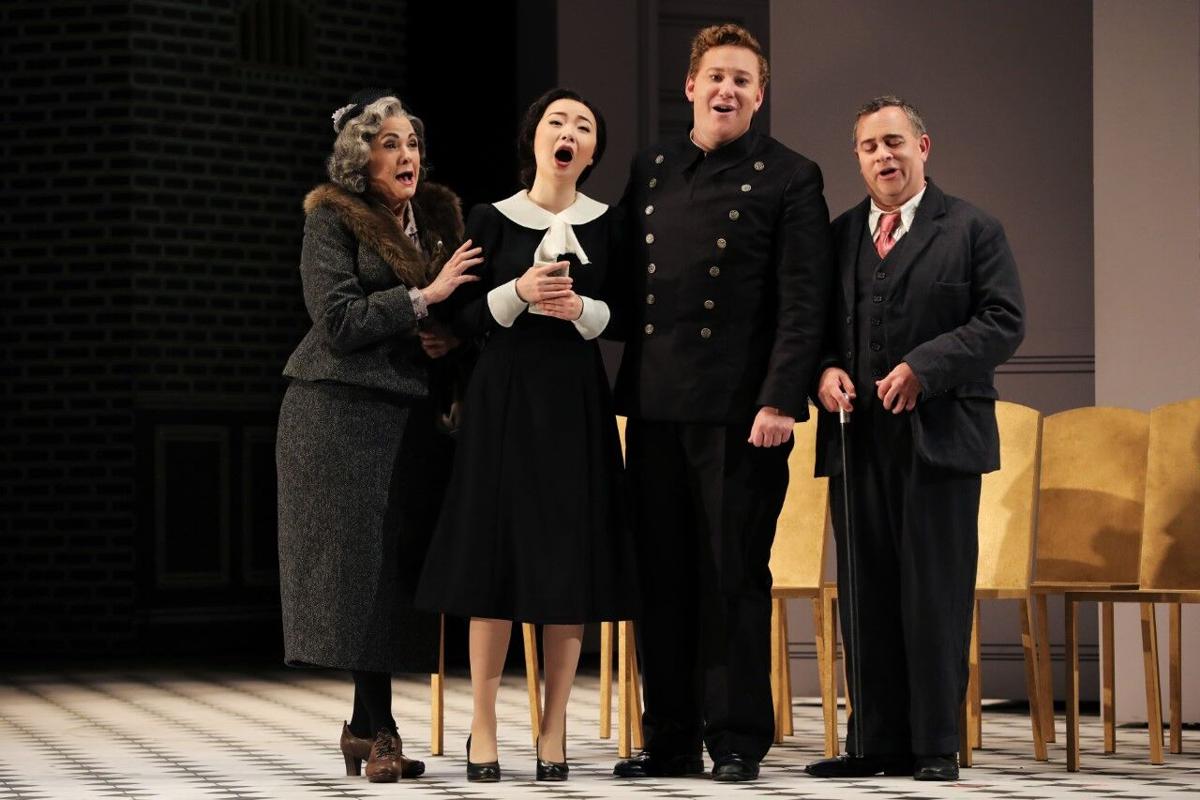 Susanne Mentzer (as Marcellina), Ying Fang (as Susanna), Nicholas Brownlee (as Figaro) and Patrick Carfizzi (as Don Bartolo) appear in the Santa Fe Opera's production of The Marriage of Figaro.

Vanessa Vasquez appears as Countess Almaviva in the Santa Fe Opera's production of The Marriage of Figaro.

From left, Samuel Dale Johnson (as Count Almaviva), Vanessa Vasquez (as Countess Almaviva) and Ying Fang (as Susanna) appear in the Santa Fe Opera’s production of The Marriage of Figaro.

Susanne Mentzer (as Marcellina), Ying Fang (as Susanna), Nicholas Brownlee (as Figaro) and Patrick Carfizzi (as Don Bartolo) appear in the Santa Fe Opera's production of The Marriage of Figaro.

After a nearly two-year absence, the sounds of music returned to the Tesuque hills on Saturday when the Santa Fe Opera opened its 2021 season with a new production of Mozart’s The Marriage of Figaro.

The curtain speech was drowned out by vociferous applause immediately after the words “Welcome to the Santa Fe Opera,” and the ovation that greeted the cast at the opera’s conclusion was as much a celebration of the company’s success in overcoming daunting coronavirus-related obstacles as it was a response to what they’d just seen and heard.

Considered one of the greatest operas by one of opera’s greatest composers, its deliciously complex plot centers on the impending marriage of two servants, Figaro and Susanna, and the several threats to its successful execution. Count Almaviva wants to have an adulterous rendezvous with Susanna on her wedding night, and an older servant named Marcellina wants to force Figaro into a marriage by means of a legal stratagem.

The production itself was a mixed bag. A fine young cast and impressive orchestra were badly served by a promising scenic concept gone astray. Designer Chantal Thomas’ set is dominated by a large turntable that looks like the face of a pocket watch; it rotates to reveal several different interior settings, powered by a set of large gears visible on stage left.

The concept is in part an homage to Pierre-Augustin Caron de Beaumarchais, author of the play the opera is based on, who started his career as a watchmaker. His play and the opera specify one set per act; more variety could certainly be introduced successfully, but this staging keeps the scenery twirling so frequently throughout Acts I, II and III that all the movement becomes a major distraction. It never conveys the crucial 24-hour time span of the opera, nor does it generate the “centrifugal forces” that sweep away the characters, as promised in SFO’s press materials.

There’s almost none of the standard acting shtick that festoons many a Figaro, which is all to the good, but the traditional approach is not replaced with a coherent and convincing alternative point of view. It’s clearly meant to be an exploration of the work’s many darker aspects, but the dramatic momentum droops too often for it to succeed — sometimes from conductor Harry Bicket’s often-expansive tempi, sometimes from the whirling set intruding too soon on the end of a scene, sometimes from a lack of incisive staging.

The transition to the fourth and final act is especially unfortunate, with what feels like several minutes of onstage silence elapsing as the stage crew removes or rearranges most of the scenery. Moments of genuine comic invention and energy, such as the repeated false exits by Figaro and the chorus near the end of Act III, are few and far between.

Director Laurie Feldman occupied an unenviable position: staging the premiere of someone else’s production. She was a last-minute replacement for Laurent Pelly. He and his design team were stuck in France, unable to secure the appropriate visas. Pelly is known for his highly personal, often quirky and usually stimulating directorial approaches, as Santa Fe audiences have seen in productions such as Platée in 2007 and Don Pasquale in 2014.

Feldman, who often assists Pelly on new productions, consulted with him from afar to get his reactions to video from rehearsals. Under the circumstances, it’s impossible to know how many of Pelly’s intended staging specifics she was able to execute. If the results were more serviceable than superlative, it was primarily due to the flawed concept.

Soprano Ying Fang, in her company debut, delivered the finest all-around performance as Susanna, Figaro’s fiancée. She’s an energetic presence onstage and her medium-sized voice is rich in timbre. Her Act IV aria, “Deh vieni non tardar,” featured beautifully shaped vocal lines and easily floated quiet notes. Another last-minute replacement, bass-baritone Nicholas Brownlee offered a brawny, big-voiced Figaro. To my taste, he could have contrasted the character’s anger, which comes naturally to him, with more guile, charm and irony; characteristics that are clearly within his interpretive range. In either case, his powerful portrayal makes clear from early on that his Figaro is going to emerge triumphant.

Vanessa Vasquez was a memorable Mimì in SFO’s 2019 La bohème. She’s young, which is right for Countess Almaviva, but she didn’t quite connect to her character’s inner turmoil or psychological richness. Her aria “Porgi, amor,” which begins Act II, was vocally tentative; her later “Dove sono” was much more successful, as was “Canzonetta sull’ aria,” the little Act III duet with Susanna during which they write the love note that will eventually unmask her husband’s philandering.

In a break from the familiar, Vasquez is noticeably pregnant, which adds a potentially fascinating complication to her strained relationship with the Count. Here it was acknowledged from a costume standpoint but otherwise not made use of. As the father-to-be, debutant Samuel Dale Johnson sang impressively, especially in Almaviva’s showpiece, the big Act III accompanied recitative and aria in which he realizes he’s being duped and vows revenge on Figaro.

Former apprentice Megan Marino offered the cast’s most fully integrated physical and vocal performance as Cherubino. Hers isn’t the most beautifully sung portrayal you’ll ever hear (her voice lacks bloom on top and doesn’t have much individuality yet). But she’s terrific in the variety of guises and disguises her character appears in over the course of the opera, finding specific ways to individualize each of them. As Marcellina and Bartolo, Susanne Mentzer and Patrick Carfizzi displayed superior acting skills, ever alert to the word or the moment.

All performances are simulcast to the opera’s lower parking lot. Prices are $100 to $125 per car, depending on proximity to the screen. For more information, visit santafeopera.org.

The biggest technological innovation at the opera since the introduction of seat-back translation screens occurred this summer with the company’s decision to simulcast performances to its lower parking lot.

The simulcasts use two LED screens, one facing east toward the Sangre de Cristos, the other north toward the opera house. English and Spanish translations of the text are displayed side by side at the bottom of the screens.

Viewed at a Marriage of Figaro dress rehearsal, the high-tech screens provided impressively crisp images of the action captured from a nice variety of camera positions and angles. The sound is broadcast on a low-range FM frequency, and its quality will vary based on how good your car’s sound system is.

On my good-but-not-great system it was acceptable. The screens aren’t huge — don’t think old-time drive-in or sports arena jumbotron; so if you’re going to a simulcast, spring for the extra $25 to get a closer spot. (Note: Smaller cars get parked closer to the front of each section.)

I was delighted to be there. I really enjoyed the performance but was mystified by the sets. I usually read up on the production before I attend, but I did not this year. I know the opera but even as many times as I have seen it, it never entered my mind what the staging and sets were supposed to represent. But let’s get real folks, everybody is rusty. We are so extraordinarily fortunate here in Santa Fe to have such a gem of performing arts. Bravo, SFO!!

They gave her part of a page in 2021 program. Skimpy, certainly not commensurate with her contributions to The Santa Fe Opera over many years. She deserves a permanent memorial on campus.

I have to agree.... The cast was magnificent!!!!!! But the stage scenery was a distracting failure.