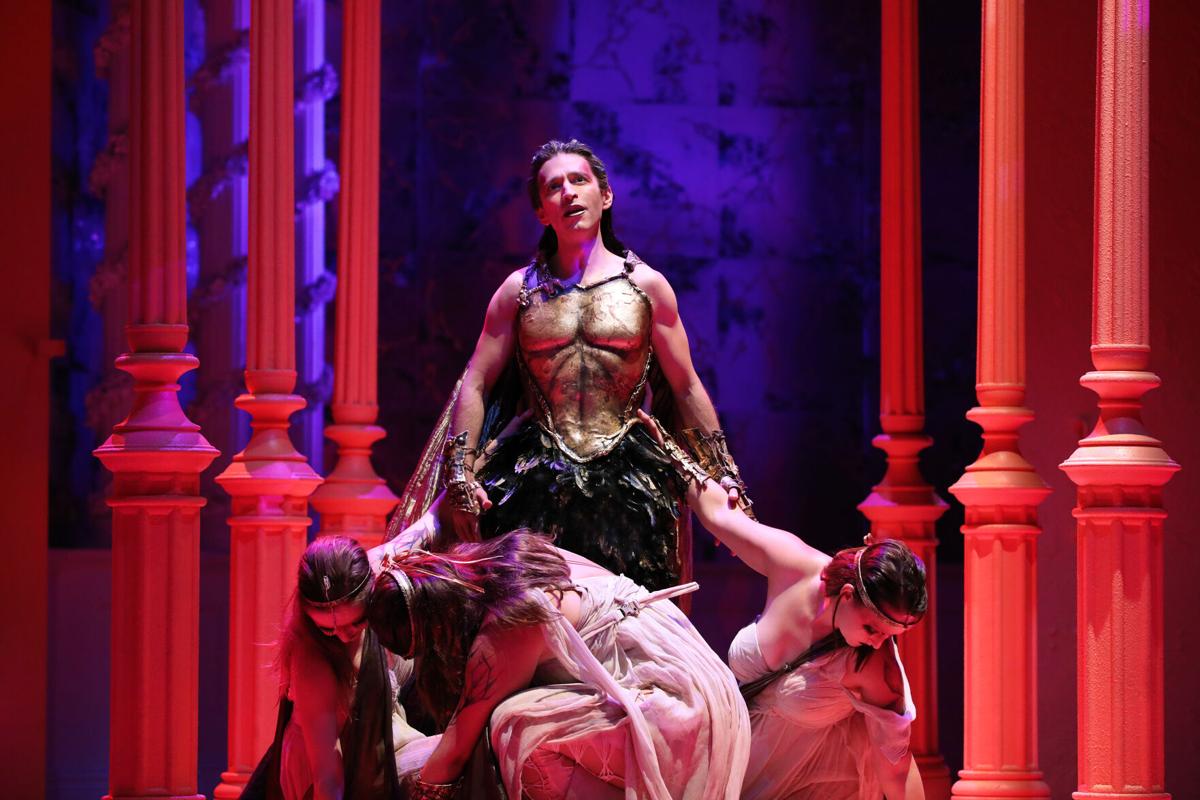 Anthony Roth Costanzo appears as Dionysus in the Santa Fe Opera’s premiere of The Lord of Cries. 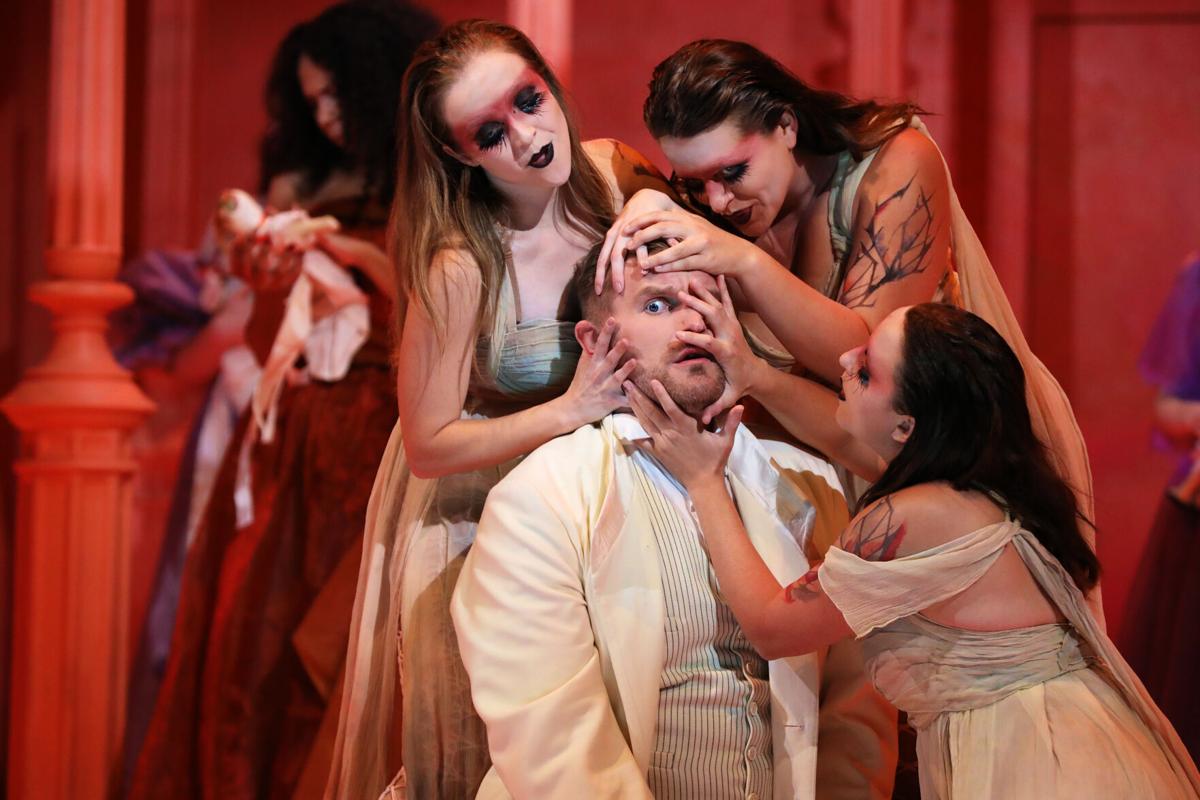 Jarrett Ott as John Seward with the Odd Sisters in the Santa Fe Opera's premiere of 'The Lord of Cries.' 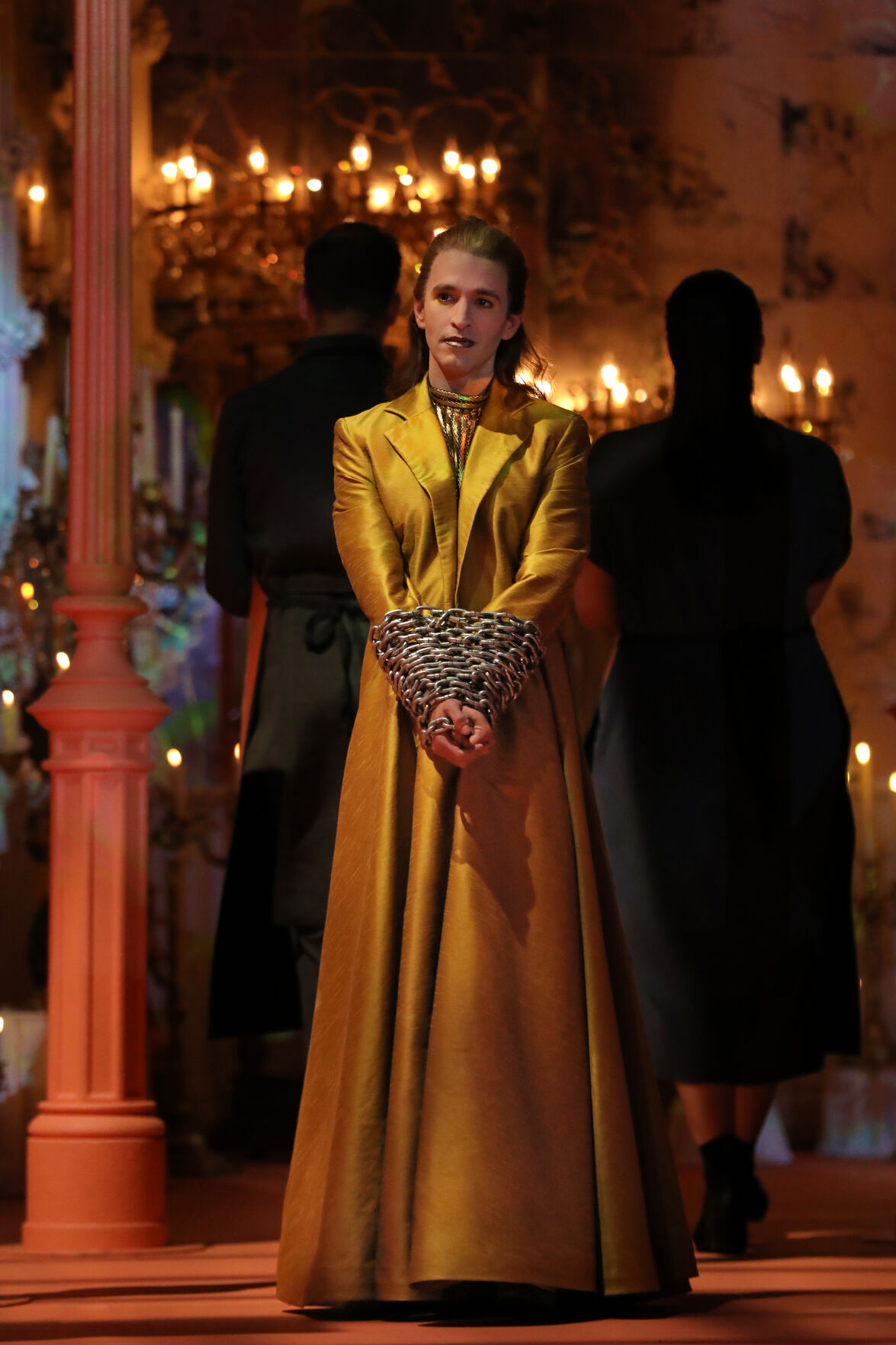 Anthony Roth Costanzo appears as Dionysus in the Santa Fe Opera's premiere of 'The Lord of Cries.'

Anthony Roth Costanzo appears as Dionysus in the Santa Fe Opera’s premiere of The Lord of Cries.

Jarrett Ott as John Seward with the Odd Sisters in the Santa Fe Opera's premiere of 'The Lord of Cries.'

Anthony Roth Costanzo appears as Dionysus in the Santa Fe Opera's premiere of 'The Lord of Cries.'

A Greek tragedy and a Gothic novel that were both considered so horrifying they should be read only by those with the strongest constitutions underlie the Santa Fe Opera’s 17th world premiere, The Lord of Cries which opened Saturday.

Composed by John Corigliano with a libretto by Mark Adamo, Cries dwells on the dangers that result from the repression of our darkest desires, told through a plot that combines elements of Bram Stoker’s Dracula with Euripides’ The Bacchae. It takes some time for the opera to find firm dramatic footing in Act I; the second act works much better. Ultimately, the piece is worth seeing and hearing.

Dracula is an important and influential Gothic epistolary novel that has spawned an enormous number of related films and works of literature. It’s no masterpiece, however, which the less-familiar Euripides is. An intrafamily revenge tragedy, The Bacchae has a single plot line that moves with brilliance and economy to its shattering conclusion.

In The Bacchae, Dionysus wreaks harsh vengeance on the city of Thebes for refusing to acknowledge his godhood. (His father was Zeus; his mother, Semele, was a human.) Here Dionysus comes to Victorian London for ostensibly similar reasons, focusing on John Seward, the ramrod-straight doctor who runs an insane asylum and his suppressed passion for Lucy Harker, the wife of his best friend Jonathan. Dionysus' modus operandi is to force characters to explore and act upon their unacknowledged urges, often with fatal conclusions.

Adamo was drawn to the works' many similarities and the conviction that telling the story of The Bacchae through the characters of Dracula would make Euripides’ themes more clear to a contemporary American audience. The idea worked in fits and starts in Act I, which includes a great deal of plot detail from Dracula. The first act is in considerable measure an epistolary opera, with characters reading extended excerpts from a ship captain’s log, from another character’s diary, and from news dispatches.

Other action was described rather than portrayed, such as the cataclysm following a bacchanal that should have ended Act I on spectacular note but it fizzled after that. Although Dionysus proclaimed, "Earthquake! Be here! Shake the world!" and the stage directions called for Seward's asylum to be destroyed by the crazed townswomen, nothing much happened. Act II had much less document reading and description of action, and by hewing closer to The Bacchae, had much stronger and more consistent dramatic impact.

Corigliano’s score is an object lesson in orchestration, bristling with vivid, memorable timbres. It’s tonally based with effective use made of spiky dissonances and the hugely varied contributions of five percussionists playing more than 30 different instruments. Corigliano is also not afraid to make use of identifiable arias for the main characters and major chord harmonies at dramatically effective moments. Among his score’s many striking moments was the musical transformation of the chorus, which is heard singing loudly in unison to a driving percussion accompaniment up until the opera’s end, when they shift to hushed, a cappella harmony to begin the final lamentation. It’s hard to imagine a more persuasive case for the opera’s musical merits than that made by Johannes Debus on the podium.

Baritone and former SFO apprentice Jarrett Ott took top vocal and dramatic honors for his portrayal of John Seward. Incisive vocally, with excellent diction, Ott offered a compelling visualization of the doubts and desires that underlie Seward’s soon-to-crumble veneer. He was closely followed in excellence by countertenor Anthony Roth Costanzo in his Santa Fe Opera debut as Dionysus, the gender-amorphous and personality-shifting god who urges the repressed Victorians to “ask for what you want.”

Understudy and first-year apprentice Kathryn Henry took over the major role of Lucy Harker just as dress rehearsals were about to begin. (Susanna Phillips was described by SFO management as leaving the production “for personal reasons.”) Henry sang very well, especially in the second half, when her upper register started to gleam, and her strong, warm lower register was showcased in several important scenes. She never embodied much of Lucy’s inner torment or sexual desire for Seward, however, and was overmatched in strength of stage personality by both Ott and David Portillo as her husband Jonathan.

Tenor Portillo did fine work with a character who is insane throughout the course of the opera, finding enough variety to keep audience interest high through most of his several extended scenes. Kevin Burdette brought his formidable acting chops to the nonsinging role of the newspaper correspondent who rattles off news updates throughout the first act. (Those of a certain age may be reminded of Walter Winchell’s “Good evening, Mr. and Mrs. America, and all the ships at sea!”) Burdette's seemingly one-dimensional character doesn't emerge unscathed, visibly deteriorating as London's travails mount up.

Bass Matt Boehler made as much as he could of Van Helsing. In the novel, he’s the world’s most loquacious and tiresome vampire hunter; here he functions as a more taciturn adviser and assistant to Seward. Apprentices Leah Brzyski, Rachel Blaustein and Megan Moore offered vivid portrayals of the three sisters, Dionysus’ acolytes, whose haunting, macabre appearance was perfectly matched by Corigliano’s eerie vocal writing for them, which ranged from tone clusters to interweaving melodic lines to pure harmonies.

Susanna Phillips did not leave ‘for personal reasons.’ That is a lie on behalf of Santa Fe management.

It was an incredible artistic experience and I'm still twisting thoughts around about the mythical implications. Such fun! While I do agree with the reviewer that I'd like to have seen a tad more drama around the "earthquake" section, that is the only very small weakness to be found in an incredible night at the opera. Costanzo was mesmerizing and I'll be following his career closely. This is an opera I'll try to see again! Bravo!!!