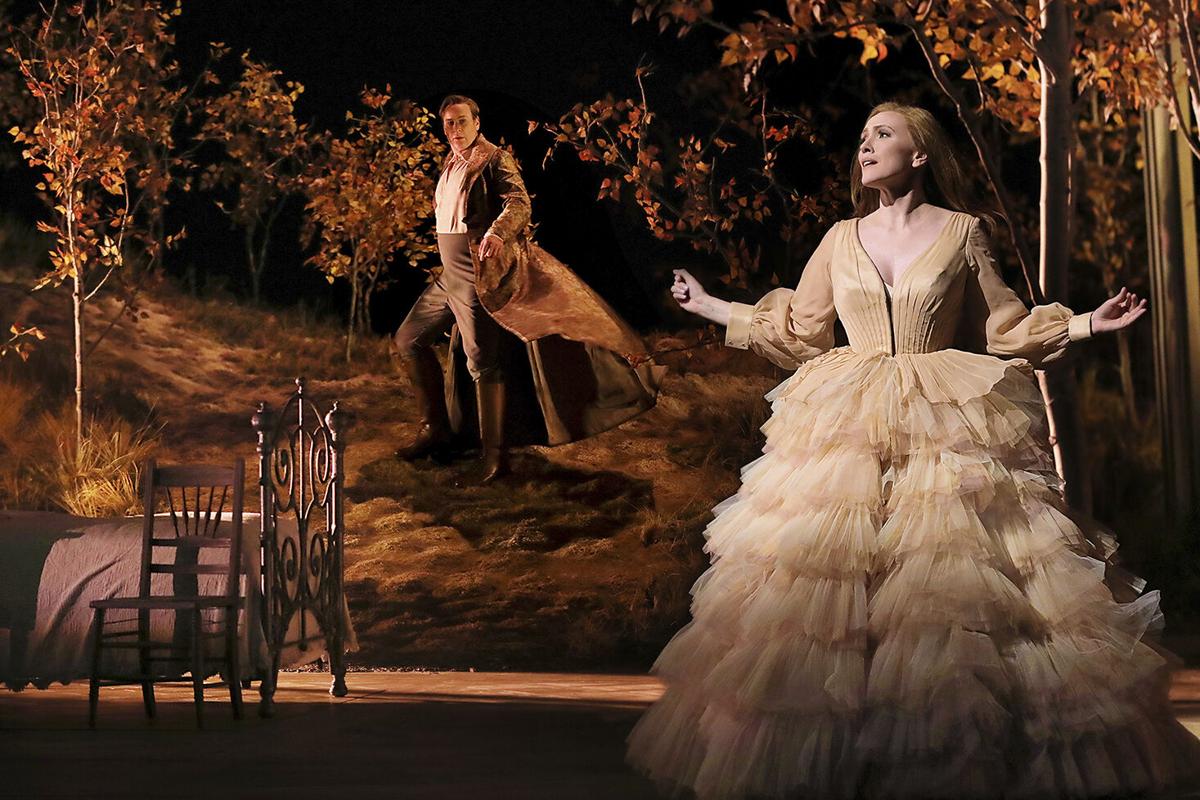 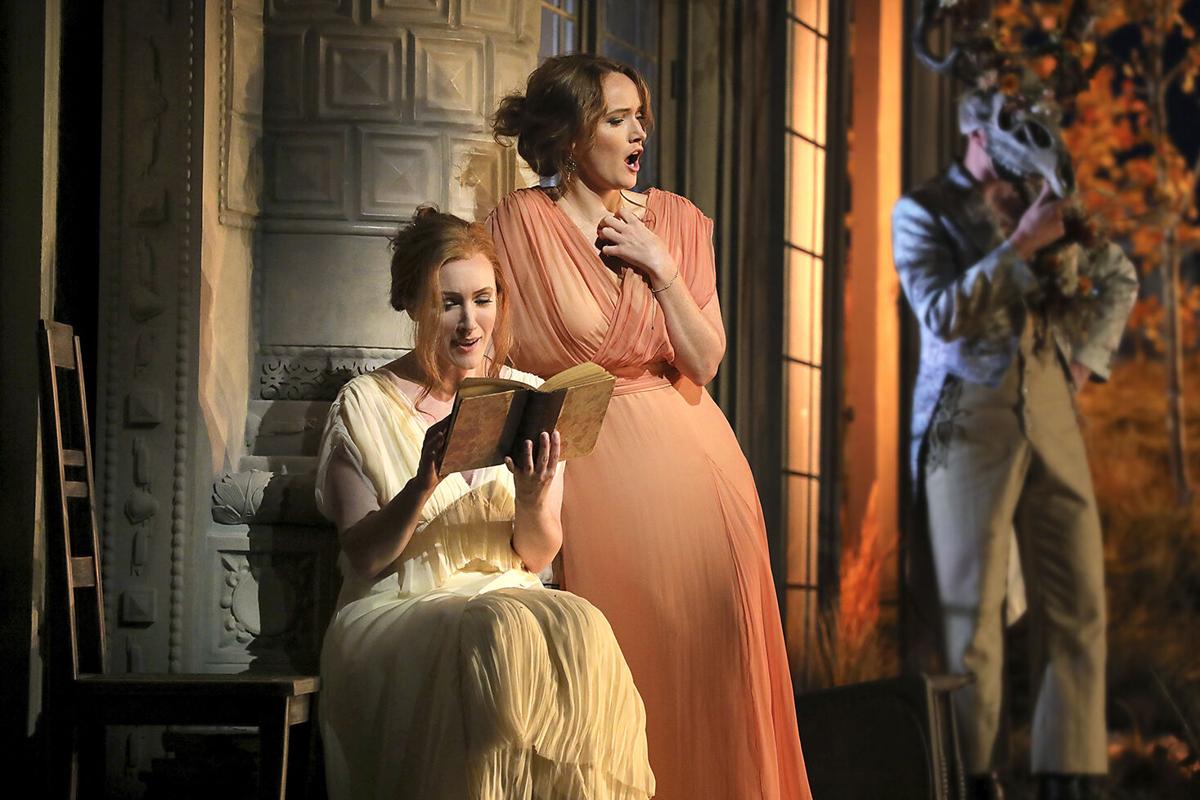 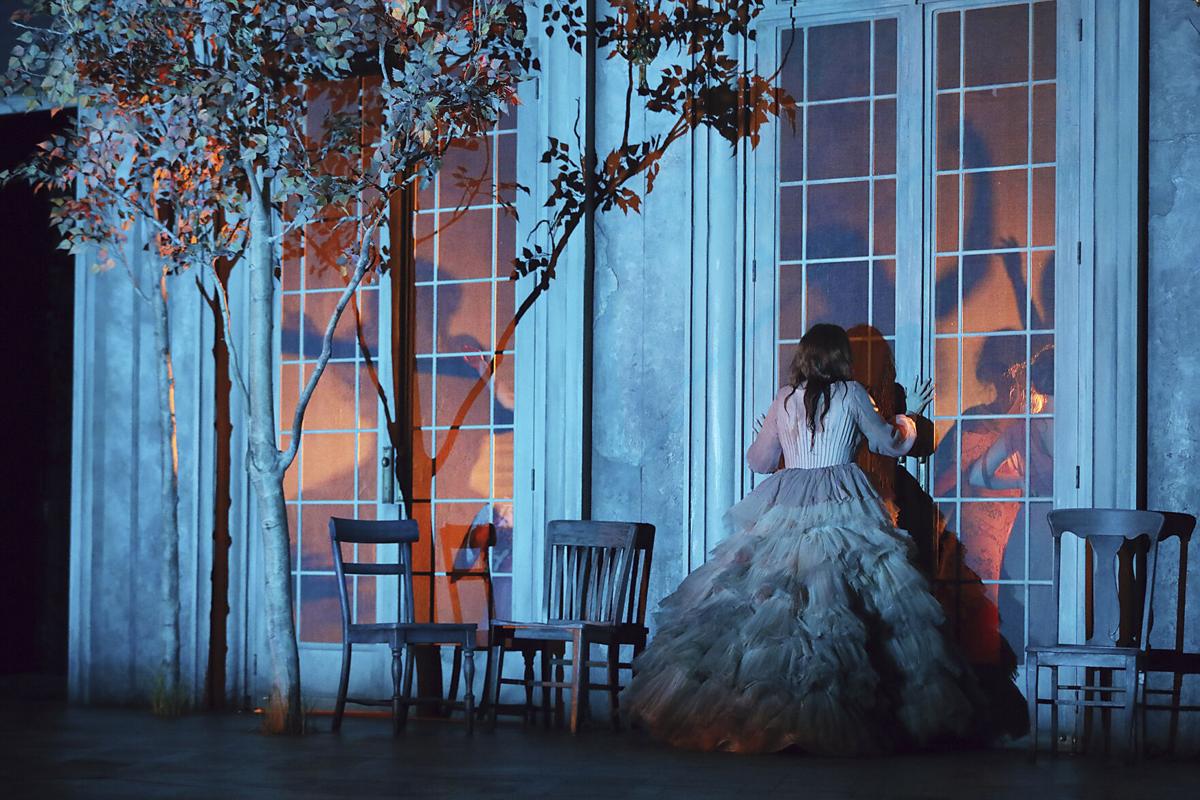 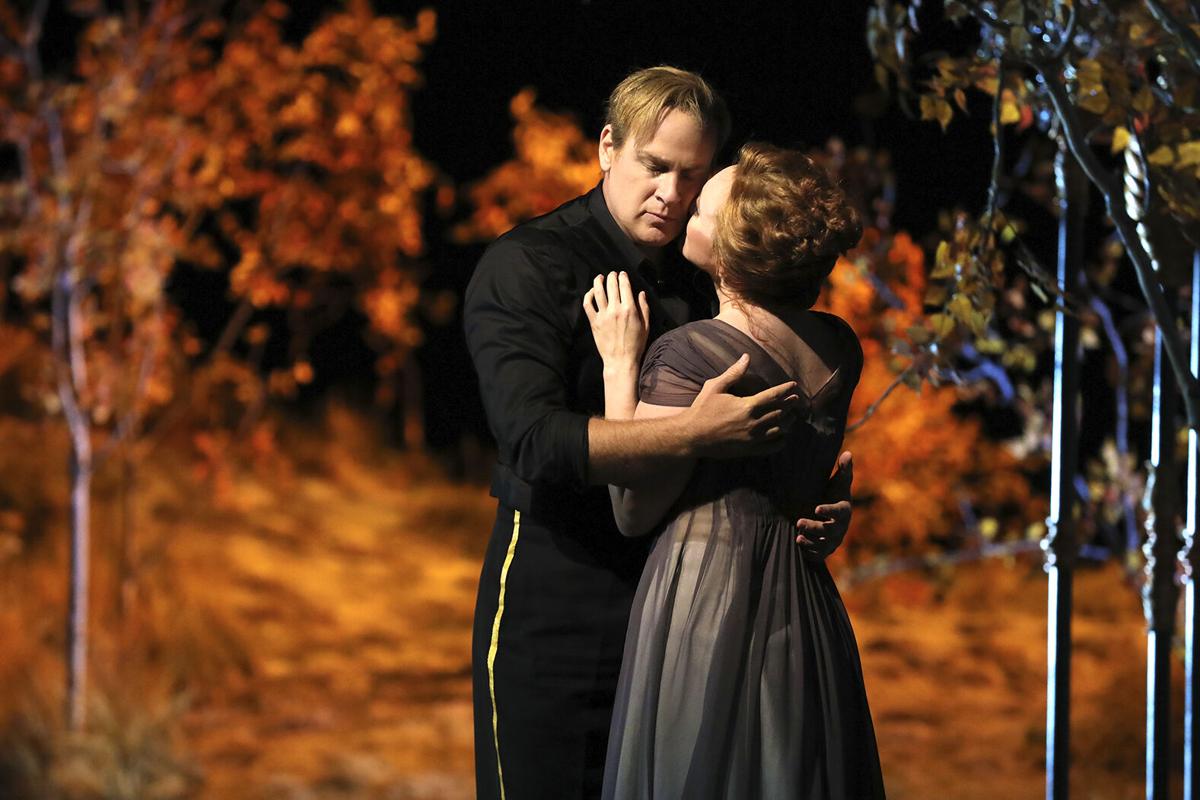 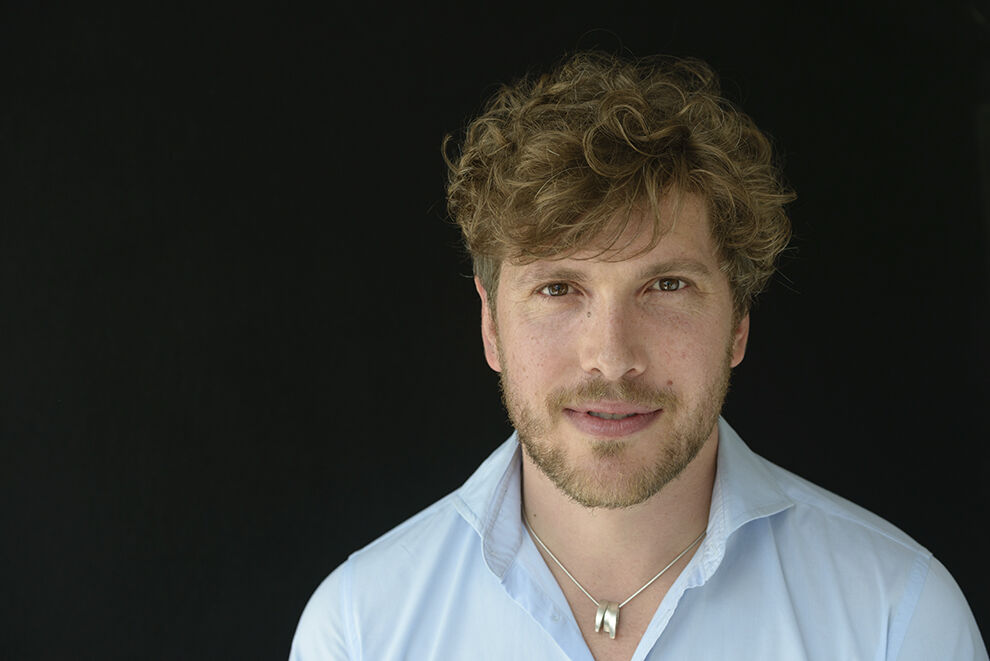 Libretto by Pyotr Ilyich Tchaikovsky and Konstantin Shilovsky, based on a novel by Alexander Pushkin

Premiered in 1879 at the Maly Theatre, Moscow

Operas by Russian composers haven’t been plentiful at the Santa Fe Opera over the past four decades. The tally is two by Igor Stravinsky (The Rake’s Progress in 1996 and The Nightingale in 2014), one by Dmitri Shostakovich (The Nose in 1987), one by Pyotr Ilyich Tchaikovsky (Eugene Onegin in 2002), and one by Nikolai Rimsky-Korsakov (The Golden Cockerel in 2017). But nothing by Modest Mussorgsky, Sergei Prokofiev, or anyone else. The pace seems to be quickening a bit, however, with a new production of Eugene Onegin about to open here just four years after The Golden Cockerel.

A profound sense of nostalgia is a recurring aspect of Russian culture. It was exemplified in the 1970s and 1980s by the “village prose” literary movement that lamented the loss of small-town traditions, and it’s back in full force today with a longing for the mid-20th-century Soviet era. Its 19th-century manifestation is a key element in stage director Alessandro Talevi’s concept for Eugene Onegin. “For me, the starting point was this strong sense of pining for a lost, idyllic childhood,” he says. “It’s a strongly Russian characteristic that Pushkin [author of the verse novel the opera is based on] felt, that Tchaikovsky felt.”

Acts I and II are depicted scenically from the viewpoint of Tatyana, the young woman who falls in love with the title character at first sight. “What the audience will see aren’t literally flashbacks, but there’s a suggestion of them as her memories of meeting Onegin,” Talevi explained. “The set is an interior and exterior both, and it has a rather dream-like quality, so you’re never quite sure whether it’s a present reality, or filtered through Tatyana’s imagination, or a memory. It’s based in reality, but the elements are blended into a dream-like expressionism.”

Act III, which takes place several years later in the house of Prince Gremin, a wealthy St. Petersburg nobleman, is seen from Onegin’s perspective. “It’s a fancy-dress costume ball, and it has a sharpness and a glamor and glitter,” Talevi says, “but it’s a dark glitter. Onegin is being whisked along in this dance even as he’s saying he can’t find any peace.” The Santa Fe Opera’s safety protocols don’t permit a big chorus singing in close quarters onstage, so they’ll perform from bleachers at the left of the auditorium while non-singing supernumeraries participate in the dance, an approach the director believes is working out quite well in rehearsals.

The South African director has staged multiple productions for Opera North (U.K.) and Maggio Musicale in Florence. His work has also been seen at the Korea National Opera, Teatro La Fenice in Venice, and Tokyo’s Nikikai Opera. Talevi’s upcoming productions include The Love for Three Oranges at the Teatro San Carlo in Naples, Italy, and La traviata for the Israeli Opera. “I’ve been stalking the Santa Fe Opera for several years now, first as a visitor coming down from Central City after directing productions there. When we started talking about my doing something here in 2021, it was originally going to be a grander-scale piece, but it fell victim to coronavirus restrictions, at least for the time being.”

The many recurring motifs in Eugene Onegin are also emphasized in Talevi’s approach to the piece. As it begins, Madame Larina, the mother of Tatyana and her sister Olga, is reminiscing about her youth and the fact that she married someone other than the man she truly loved. “At the end, Tatyana has become Madame Larina; she’s made the same bargain in her life by marrying Prince Gremin,” he says. “The cycle of life it depicts really interests me about this opera.” It’s a point that’s suggested visually at this production’s opening scene, in which Madame Larina and the servant are painting matryoshka dolls, also known as Russian nesting dolls, rather than making jam, suggesting generations that repeat over the decades.

Lucas Meachem has been called just about every pejorative adjective there is. Oh, he’s a nice enough fellow in real life (a real sweetheart, actually), but he’s also a 6’ 4” ex-basketball player with a commanding baritone voice. The adjectives above start flying his way when he plays such reprobates as Don Giovanni and, fortunately for the Santa Fe Opera, Eugene Onegin.

Meachem was at home with his family in Minneapolis when he got the official word on June 26 to head to New Mexico. The originally engaged singer couldn’t get here due to visa troubles, so Meachem flew to Santa Fe the next day and started rehearsing on Monday morning.

“I play a lot of these unseemly characters, and if you’re playing a baddie, you have to give them a heart,” Meachem says. “You have to give them positive reasons for doing what they do, something that comes from a personal need or that they get enjoyment from. When Onegin makes fun of his friend Lensky and flirts with Lensky’s fiancée Olga, he’s not just being generally mean. There’s a backstory there: Lensky says to me, let’s go to a party, it won’t be a big deal, we won’t stay long, and it turns out to be this full-blown ball, and everybody is jeering at me and gossiping about me. So it’s me getting even with Lensky for not being honest about what it was going to be like.”

When Meachem was first learning the role of Onegin, he went right for the highlights. They weren’t from a CD of famous vocal excerpts, though. They were on the rainbow-hued pages in Pushkin’s novel, which he had marked up with six highlighters in various colors. “It looked like a bunch of kids had gone at it,” he recalls. “I had one color for each of the four main characters, one for their relationships, and one for their character traits. I learned a great deal from some of the little details in the novel. For instance, when Onegin travels, he has a huge satchel that’s full of grooming equipment, and it’s all gold and ivory, very beautiful things. That says a lot about a man, to travel with that many beauty products.”

Santa Fe operagoers may recall his two prior appearances here, as Donald in the 2008 staging of Billy Budd and Don Giovanni in 2009. Meachem’s upcoming engagements include Escamillo in Carmen at the Bavarian State Opera and Marcello in La Bohème at the Teatro Real Madrid and the Metropolitan Opera. He came here almost immediately after shooting a film version of Pagliacci which uses Chicago’s Lyric Opera House as its setting.

For Avery Amereau, performing Olga in Eugene Onegin embodies the cyclicality that Talevi wants to emphasize in his production. “I’ve been here before, to sing with Santa Fe Pro Musica, but this is my debut with the opera,” she says. “Olga’s the first role I ever sang in an opera, as a student at Juilliard, and this is my first production after the pandemic.”

The contralto made her professional debut at the Metropolitan Opera in 2016 in Puccini’s Manon Lescaut, with the New York Times describing her performance as “captivating ... [Amereau] stood out for the unusually rich, saturated auburn timbre of her voice.” She has since sung at the Glyndebourne Festival, the Seattle Opera, the Grand Théâtre de Genève, the Salzburg Festival, the Opéra de Lille, and the Opéra de Lyon.

Amereau’s empathy for her character is apparent right from the start. “I like her! She’s a good time, she’s flirtatious, she follows whatever her instincts lead. She’s never been knocked down yet, so she has this invincible spirit.” Alessandro Talevi’s working style in rehearsals is a big plus for Amereau. “He physically embodies the energy he wants you to give as a performer when he directs. It’s so helpful to me because I can snatch that energy on the spot and use it.”

Tapping into the sibling rivalry between Olga and her older sister Tatyana (Sara Jakubiak) is part of the production’s point of view. “It’s like I’m the popular cheerleader with a boyfriend, and she’s the one with her nose always in a book and who has the high SAT scores,” Amereau says. “Underneath it all, Olga really loves her sister and wants her to be happy. Her suggestion for how to achieve it says a lot about Olga’s character, though. It’s that she should be more like me!”

Tatyana doesn’t just enjoy reading; her emotional life comes almost entirely from her identification with the fantasy worlds of romantic fiction. When Tatyana’s mother notices that her older daughter has turned pale while reading a book, Tatyana explains why: “The account of the torments suffered by these true lovers moves me. I’m so sorry for them, poor things! Oh, how they suffer, how they suffer.”

And when Amereau points out that Olga is a 14-year-old, she’s identified one of the most important keys to understanding not only her own character, but the others as well: They’re surprisingly young. Of the four leads, Onegin is the senior citizen at 26, while Lensky, Tatyana, and Olga are all in their teens.

Olga’s relationship with her fiancé Lensky, an idealistic poet, provides an equally strong contrast to the one she has with Tatyana. “In his first act aria, Lensky is all ‘I love you, I love you, I love you,’ and her response when it’s over is, ‘Yeah, we grew up together, and our parents arranged our marriage.’ He’s like this puppy that follows her everywhere.”

In Act II, Olga’s live-for-the-moment attitude leads her to flirt and dance with Onegin at a party, which angers Lensky so much that he ends up challenging Onegin to a duel. “She’s the catalyst for the first truly scary thing that’s happened in her life,” Amereau says, “and all these conflicting ideas go racing through her head. ‘I’m feeling guilty, and I don’t want Lensky to die, but on the other hand, I didn’t do anything. I just danced with Onegin, and I knew it made Lensky mad, but I should be able to do whatever I want.’ It just totally overwhelms her.” ◀

The plot, and juicy tidbits about the novelist, composer, and dueling in Russia.

“I have a lot in common with Eugene Onegin. He doesn’t feel like he belongs in the world he was placed in.”