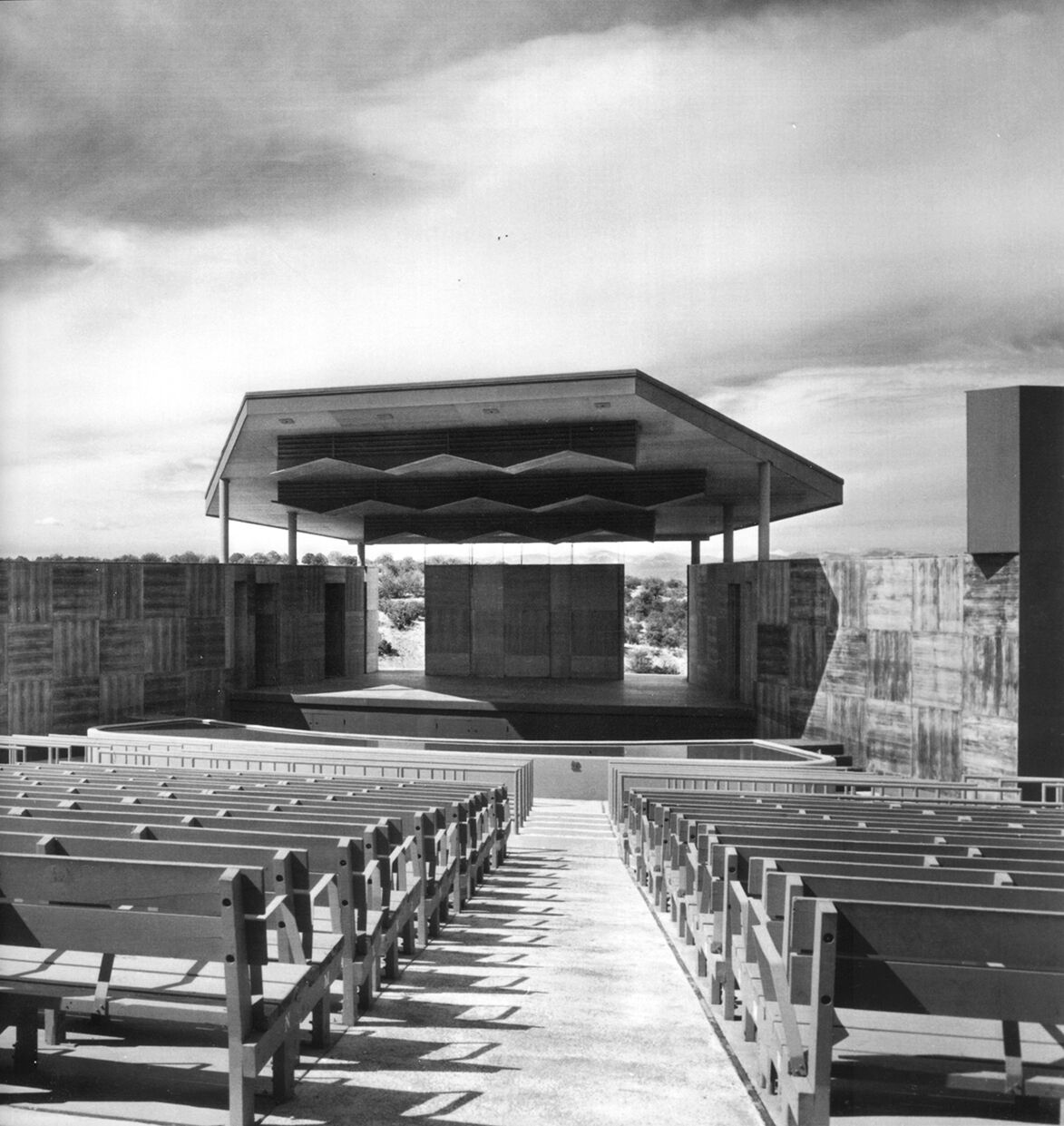 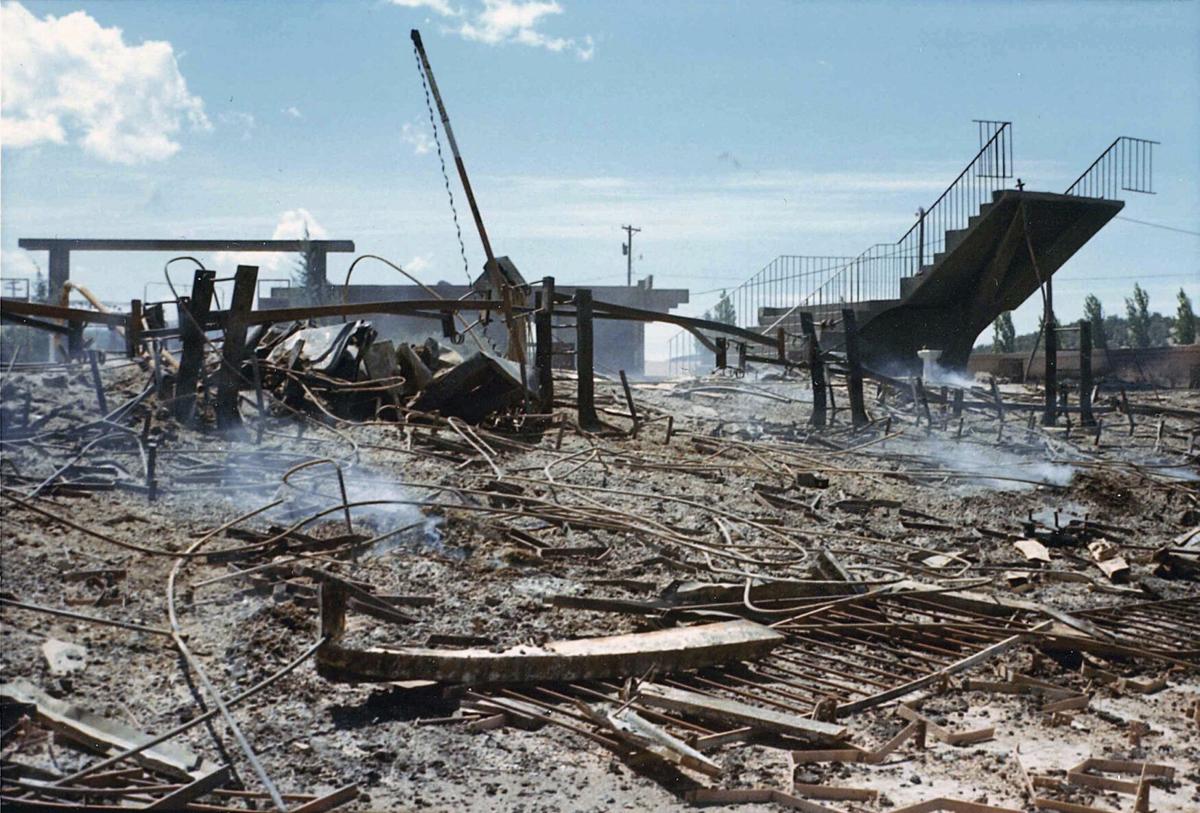 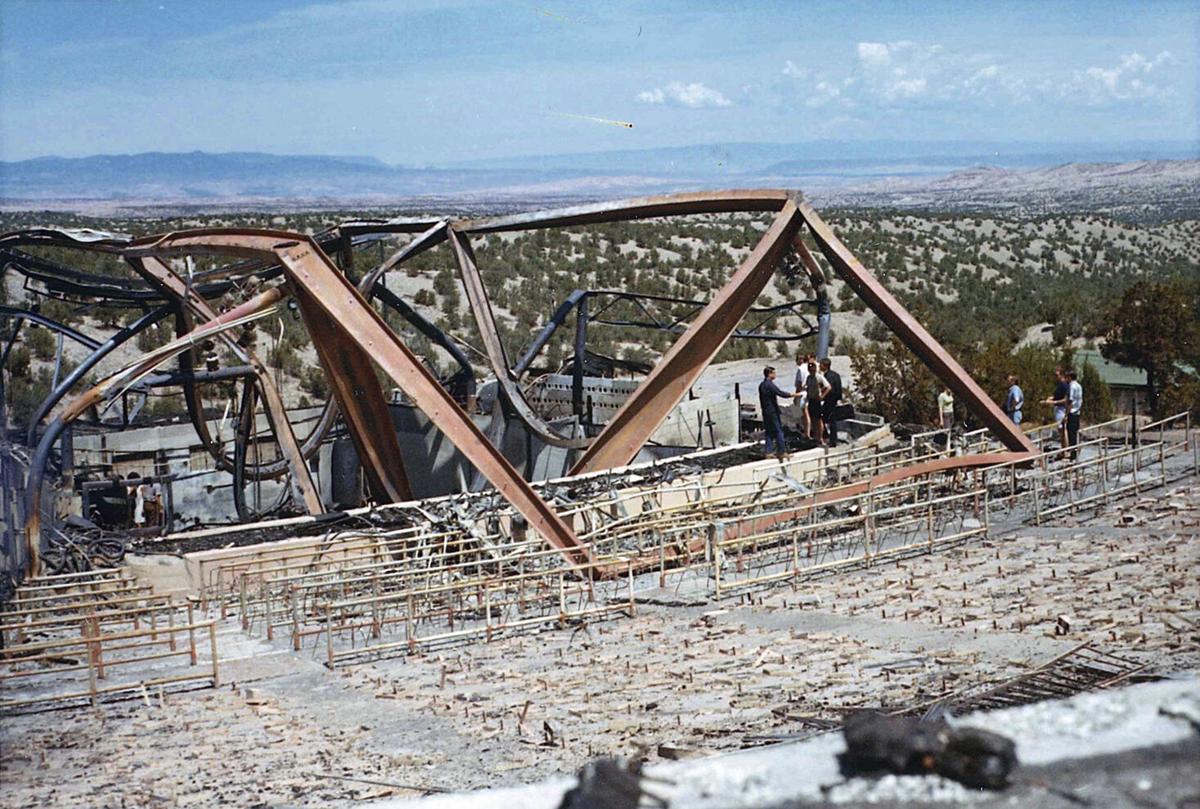 The opera house after the fire 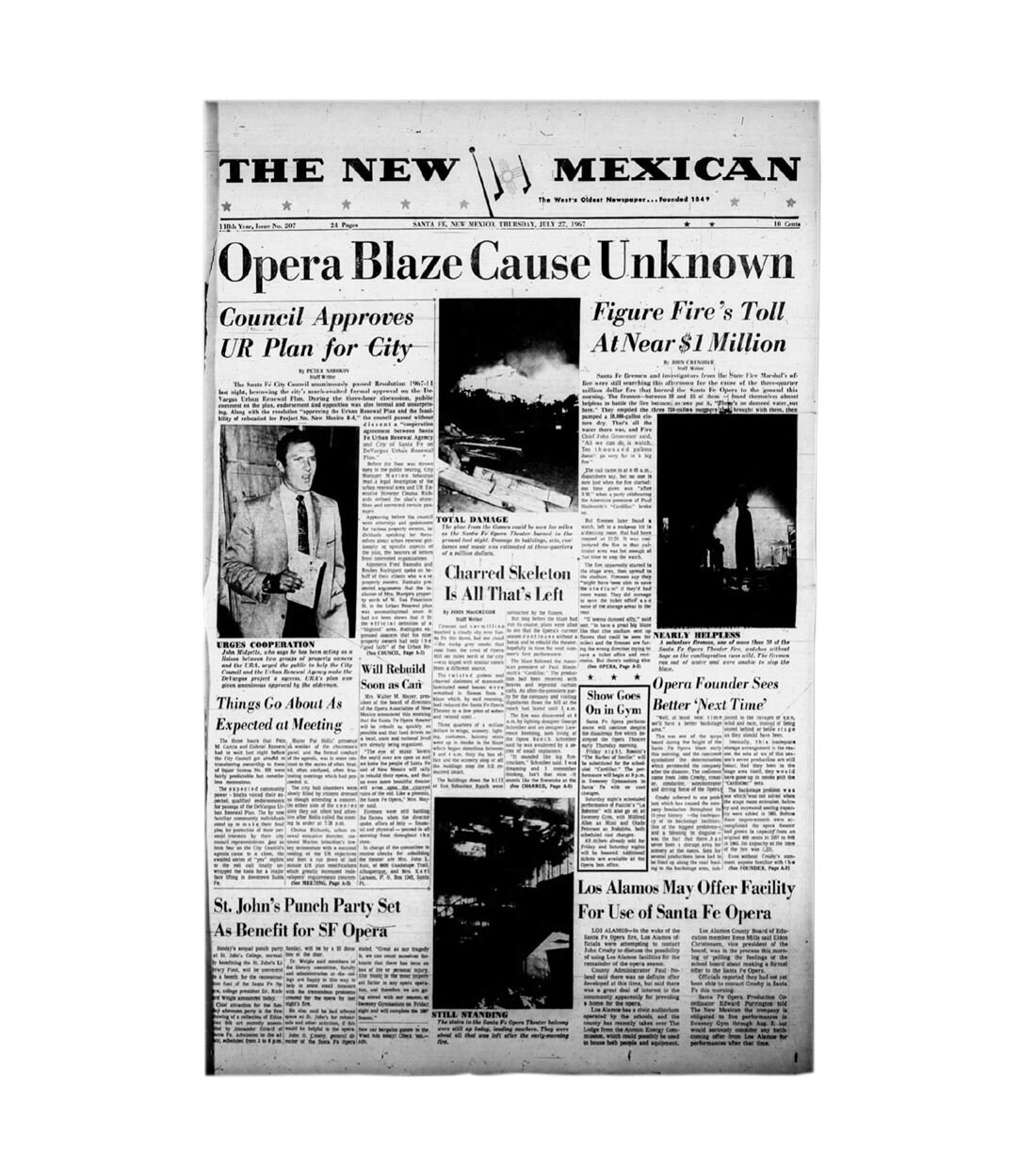 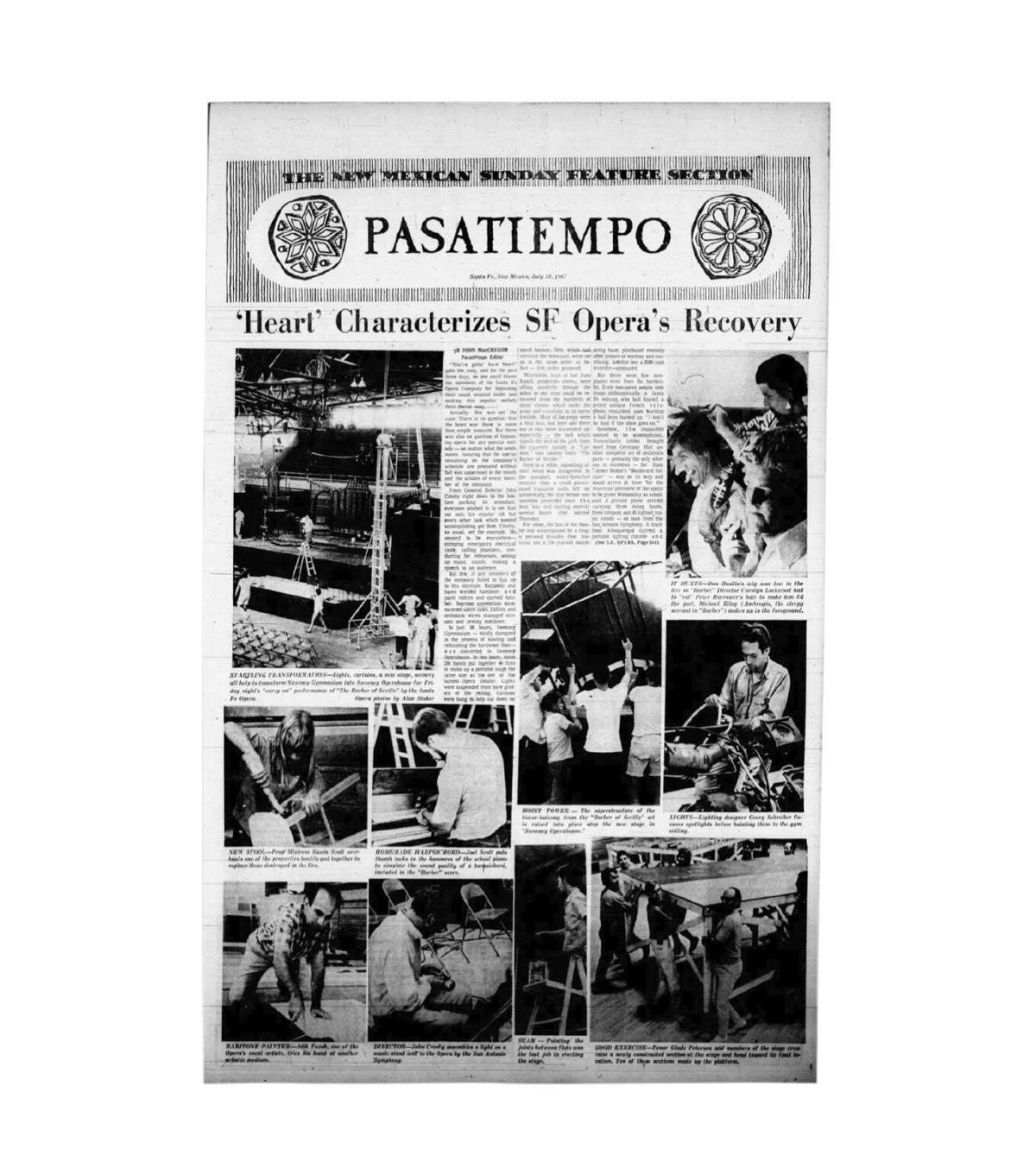 The opera house after the fire

Benjamin Saiz, a longtime Santa Fe Opera employee, remembers the Thursday morning phone call with great clarity. “Someone called around 6 a.m. and asked me to come up to the opera because there had been a fire. The first thing I thought was that someone had forgotten to unplug these coffee pots at the concessions stand near the theater.”

The American premiere of an opera called Cardillac by Paul Hindemith had taken place the night before, July 26, 1967. On his drive to the theater, Saiz also wondered whether the production’s onstage fire cauldron might have started a little fire somewhere. “But when I got there, my heavens, the whole theater was nothing but ashes and the iron armrests of the seats down front, and lots of twisted beams.”

One of the firefighters told The New Mexican, “The firemen are facing the wrong direction trying to save a ticket office and restrooms, but there’s nothing else we can do. There’s no damned water out here.” After pumping dry the cistern, Fire Chief John Grosvenor said, “All we can do is watch. Ten thousand gallons doesn’t go very far in a big fire.”

The 1967 season boasted an ambitious, seven-production repertory staged over nine weeks: Carmen, Salome, The Marriage of Figaro, The Barber of Seville, La bohème, and the American premiere of Hans Werner Henze’s Boulevard Solitude, in addition to Cardillac. Fortunately, scenery for six of the seven productions survived the fire, with Cardillac the only loss.

Costumes were another story, though. Only The Barber of Seville’s were saved, because they were out being dry cleaned. Everything else — lighting equipment, music, music stands, and large instruments that were left each night in the pit — was gone. At the time, opera officials estimated the total loss at as much as $1 million, which would be almost $8 million in today’s dollars.

Baritone David Holloway was a second-year apprentice whose assignments that summer included Morales in Carmen and singing in the chorus of Cardillac. “I just loved the Hindemith, and especially the performance of John Reardon in the title role,” he recalls. “There was also a legendary party for it after the opening night performance, which just about everyone in the company went to.

“On Thursday morning, just a few hours after the party ended, I got a call to go downtown to Sweeney Gymnasium.” (It’s now the convention center. At the time, that space and city hall were the city’s middle school.) “All the apprentice singers were assembling there, all the technicians, and some of the soloists, and we started right in with building platforms to make a stage. It was amazing how quickly it got organized.”

Thirty-six hours after the fire, The Barber of Seville was performed at “Sweeney Opera House,” in place of the planned Cardillac. No performances were canceled, and the rest of the season took place as scheduled, with La bohème in modern dress and Boulevard Solitude in 1940s attire scrounged from Santa Fe locals. Costumes were built for Salome (starting in a board member’s home) and rented anew elsewhere for Figaro and Carmen.

Financial support from the community began almost immediately in ways large and small, often from individuals or groups with no prior connection to the opera. The day after the fire, St. John’s College decided to give the proceeds from their “punch party,” the school’s biggest fundraiser, to the opera instead of its library. Los Alamos Laboratory Group 14 sent its excess coffee fund money.

Lisa and Lori, ages six and eight, mailed a printed letter, decorated with tulips, saying, “We had a carnival yesterday and earned $12.74. We thought we might give it to you to build the Santa Fe Opera.” (That’s $98.33 in 2020 dollars, so it must have been an excellent carnival.)

There were other pleasant surprises along the way. La bohème in contemporary clothes worked amazingly well. (Modern-dress stagings of period pieces are commonplace now but were very innovative back then.) “The acoustics in the school gym were surprisingly good,” Saiz recalls. “It turned out that there was a lot of sound-absorbing material on the ceiling, which really helped.” The bleachers replicated the wooden benches at the back of the opera’s seating area, but with one difference — several hundred more people could be accommodated than at the company’s 1,153-seat theater.

The cause of the blaze seems never to have been identified, although different rumors circulated for decades. It might have been an electrical malfunction. (Doubtful, as author Craig Smith observed in A Vision of Voices, his 2015 biography of company founder and general director John Crosby.) Or, perhaps, it was the act of some a disgruntled ex-employee.

Crosby himself was the culprit in two of the rumors — either he set the fire in order to speed up the process of getting a bigger, better theater, or because he was angry that his then-paramour went off with one of the soloists during the Cardillac cast party. No matter the cause, it led to a double triumph for the company — the salvation of the 1967 season in true “The show must go on” tradition and the rapid design and construction of a new theater seating 1,889 that opened 11 months later.

Astonishingly, the seven-opera seasons at the time were produced by a full-time, year-round staff of no more than a dozen members, along with seasonal employees. Current SFO seasons consist of five productions over nine weeks, with a full-time staff of around 70. How was it possible back then?

Like many arts groups at the time, the opera functioned on a type of “guarantors” basis, in which board members and a few other donors would get together at the end of a season and contribute enough to cover remaining expenses. Most of the other fundraising was conducted by volunteers in various guild chapters.

You’d scan the 1967 season program book in vain for any evidence of a development department or a complex roster of donor perquisites. Nor would you find a marketing department. To be sure, there was a summer box office operation and a contracted publicity function, but nothing resembling a big subscription campaign, a concept that started to take hold in the 1980s.

artistic functions, such as marketing and fundraising. This growth has been fueled largely by major gifts from mega-donors; in other words, the enormous concentration of wealth at the very top of our society.

As arts groups ponder uncertainties about ticket sales and contributions, what the Santa Fe Opera achieved in 1967 might be an inspiration to developing more flexible business models for the future. ◀