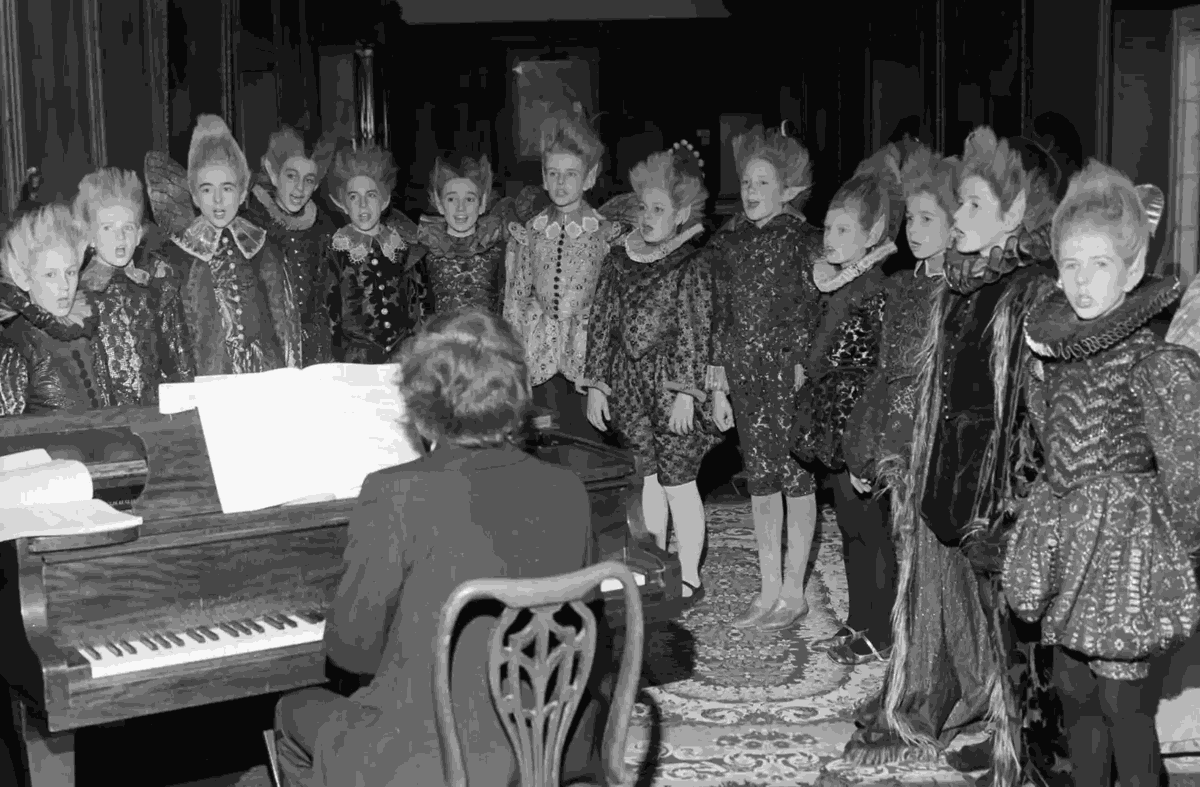 Glyndebourne 1981: At England’s Glyndebourne Festival, the fairies were Mini-Me versions of Elizabethan aristocracy. 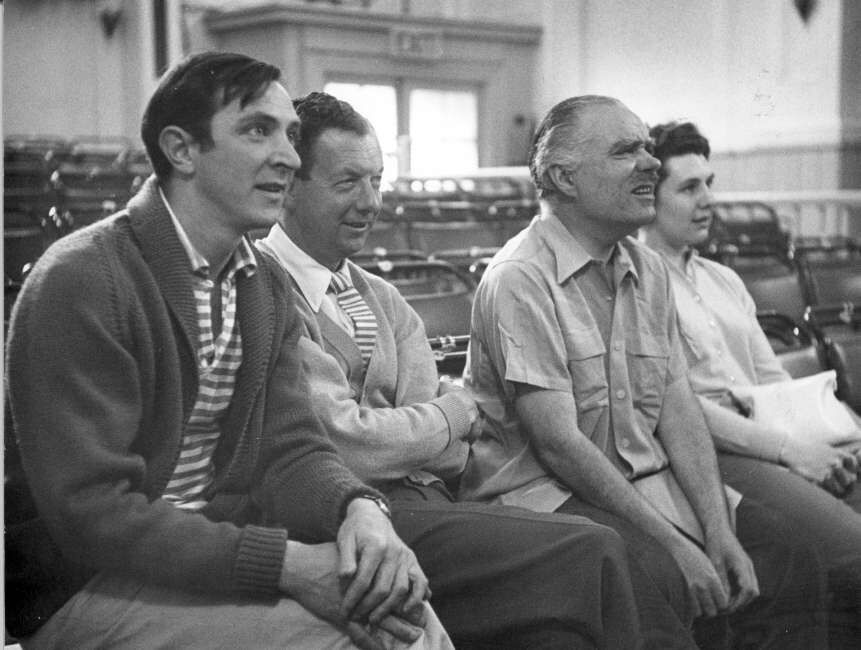 Glyndebourne 1981: At England’s Glyndebourne Festival, the fairies were Mini-Me versions of Elizabethan aristocracy.

The Fairies: Oberon and Tytania, king and queen of the fairies, and Puck, a sprite who does Oberon’s bidding, not always correctly

The Mechanicals: Quince, a carpenter; Bottom,a weaver; Flute, a bellows-mender; Snug, a joiner; Snout, a tinker; Starveling, a tailor

As the opera begins, all the love relationships have gone wrong. Oberon and Tytania are fighting over her boy-servant; Hermia and Lysander are fleeing from her father, who insists that she marry Demetrius; and Demetrius has thrown over Helena in his infatuation with Hermia. In an attempt to right matters, Oberon tells Puck to collect an herb with the power to cause its sleeping recipient “to madly dote upon the next live creature that it sees.”

After the mechanicals rehearse their play about Pyramus and Thisbe, Puck springs into action, having been ordered by Oberon to apply the herb to Demetrius’ eyes when “the next thing he espies” will be Helena. He anoints Lysander’s eyes instead (by mistake) and Tytania’s as well. When Lysander awakes, he sees Helena and immediately starts to pursue her; Tytania wakes up seeing Bottom, now disguised as an ass thanks to more of Puck’s mischief, and she chases after the surprised weaver.

Following further complications, Puck is finally able to right matters for all three couples. Duke Theseus and Queen Hippolyta arrive and celebrate their imminent wedding, along with those of the lovers, by watching the mechanicals perform The Most Lamentable Comedy and Most Cruel Death of Pyramus and Thisbe. After everyone else retires to bed, Puck bids the audience goodnight.

THE PLAY AND ITS OPERATIC ADAPTATIONS

Scholars believe that A Midsummer Night’s Dream was written around 1596, based on topical references in it and textual similarities to its contemporary, Romeo and Juliet. The first known performance was on Jan. 1, 1604; the title page from the first publication, in 1600, says that it “hath beene several times publickely acted” by Shakespeare’s acting troupe, Lord Chamberlain’s Men.

Over the centuries since, more than 40 composers have used it as the source material for operas, but the only one to have maintained any popularity other than Britten’s is Henry Purcell’s The Fairy Queen, a heavily adapted “restoration spectacular” dating from 1692. Felix Mendelssohn wrote a concert overture inspired by the play at age 17. Sixteen years later he wrote 13 more numbers, which, along with the overture, were used in a lavish stage production of the play commissioned by King Frederick William IV of Prussia. As a 15 year old, Britten played viola in the concert suite of Mendelssohn’s music and fell in love with it. His score for the opera includes several musical references to the earlier score; the four hushed chords which begin Britten’s Act II are a chromatic version of the chords Mendelssohn used at the beginning of his celebrated overture.

Britten was born in 1913 in Lowestoft, the easternmost point in Britain, on the North Sea. A musically precocious child in a musically oriented family, he played the piano and the viola from a young age and began studying composition with Frank Bridge, a well-known British composer, at age 15. Britten’s first international success was Variations on a Theme by Frank Bridge, Opus 10, a piece for string orchestra that premiered in 1937 at the Salzburg Festival.

Now acknowledged as England’s greatest composer since the Baroque master Henry Purcell, Britten composed masterpieces in just about every musical genre. Operas and other vocal music are especially prominent in his output, thanks to the performing skills of his life-partner, tenor Peter Pears, an Oxford dropout turned choral singer. They met in 1937 when Pears was a member of the BBC Singers and their personal relationship began in 1939, during a long American sojourn.

Pears didn’t have a conventionally beautiful or large-sized voice, but he was a very expressive singer and a skilled stage performer. Britten crafted many leading roles for Pears, including Peter Grimes, Albert Herring, and Captain Vere in Billy Budd. He took the smaller, comic role of Flute, the bellows-mender, in A Midsummer Night’s Dream, due to the large number of commitments he had before its premiere.

A Midsummer Night’s Dream was written specifically for performance at the Aldeburgh Festival in the summer of 1960. The festival was founded in 1948 by Britten, Pears, and stage director Eric Crozier; performances were given mostly at the Jubilee Hall, which could accommodate an audience of about 350 and an orchestra of no more than 40 players.

Britten and Pears decided to write their Shakespeare opera during August 1959, creating a very short timeline for a full-length piece to debut the next summer. They eliminated half of Shakespeare’s text, including the entire first act, and supplied the necessary information about what happened during it with six words of text — “compelling thee [Hermia] to marry with Demetrius.” When purists grumbled about the extent of the deleted text, Britten laconically replied, “Shakespeare will survive.” And despite the orchestra’s moderate size, Britten drew an extraordinary range of timbres from it, thanks to his skill with orchestration.

GODFATHER OF THE COUNTERTENOR

Nowadays it seems like you can’t go to the grocery store without running into a countertenor, but 60 years ago it was a far different story. They were just beginning to arrive on the classical music scene, and they were greeted, in some corners, with skepticism or disdain. The catalyst for their popularity today was Alfred Deller, “godfather of the countertenor,” who was born in 1912. A boy soprano in church choirs, he continued singing as an alto after his voice didn’t break in conventional fashion during puberty.

Britten wrote Oberon specifically for Deller’s unique vocal characteristics (his range was lower and somewhat smaller than what we typically hear today) and insisted he take part in the opera’s world premiere, despite Deller’s lack of acting experience. He never performed Oberon onstage again, but the unique beauty and fullness of Deller’s voice can be heard on the 1967 recording conducted by the composer.

After a concert performance in Germany, an obviously impressed but somewhat puzzled audience member asked him, “You are eunuch, Herr Deller?” His courteous reply was, “Madame, I’m sure you meant to say unique.” ◀

The delights and dangers of midsummer dreams

To most of us, the stark, arid landscape of northern New Mexico doesn’t look remotely like a perfect setting for A Midsummer Night’s Dream. But then, most of us aren’t Netia Jones, the British polymath serving as stage director and designer of the scenery, costumes, and projections for Benjamin Britten’s masterful version of the Shakespeare work at the Santa Fe Opera.