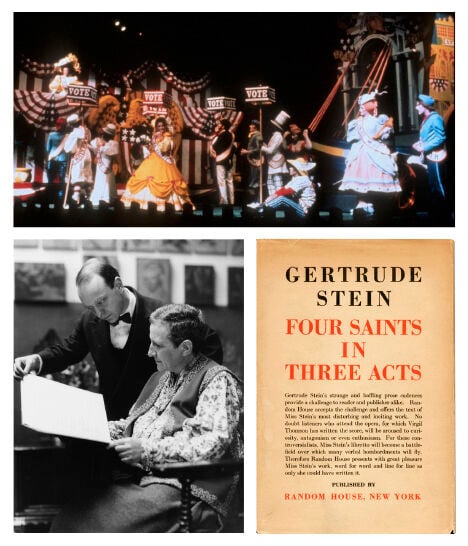 Clockwise from top, The Santa Fe Opera's 1976 production of The Mother of Us; the first edition of the libretto for Four Saints in Three Acts; composer Virgil Thomson and librettist Gertrude Stein 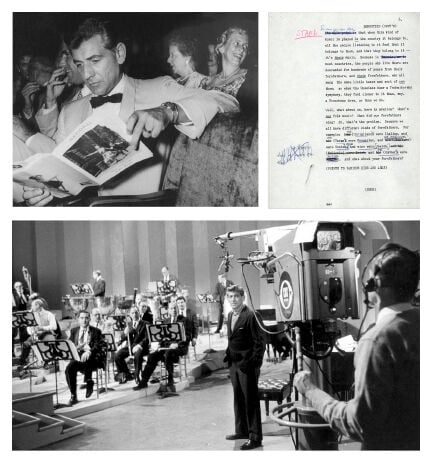 Clockwise from top left, Bernstein in the audience for a West Side Story preview; the shooting script for "What Is American Music?" Young People's Concert with Bernstein's final edits; and Bernstein and the New York Philharmonic

Clockwise from top, The Santa Fe Opera's 1976 production of The Mother of Us; the first edition of the libretto for Four Saints in Three Acts; composer Virgil Thomson and librettist Gertrude Stein

Clockwise from top left, Bernstein in the audience for a West Side Story preview; the shooting script for "What Is American Music?" Young People's Concert with Bernstein's final edits; and Bernstein and the New York Philharmonic

A few classical composers have been able to shift successfully from quarter notes and time signatures to past participles and auxiliary verbs, writing prose that’s just as enjoyable to read as their music is to hear. It’s a short list, though. In the Romantic era, Hector Berlioz wins by a mile, especially his memoirs, with Richard Wagner running a distant second. (Wagner gets points for historical importance but not for clarity and style.) Here, we regale you with the delicious turns of phrase, wit, and thinking of more contemporary composers: Virgil Thomson and Leonard Bernstein.

Virgil Thomson was a Missouri-born Francophile whose Four Saints in Three Acts (1934) and The Mother of Us All (1947) are two of this country’s finest operas. Both feature music of radical simplicity that showcases Gertrude Stein’s Dadaist texts and the composer’s consummate skill in setting American speech rhythms and inflections to music. Given his ear for language, it’s no surprise he was also a first-rate writer.

In his deliberately provocative book The State of Music (1939), Thomson pilloried what he called the “music appreciation racket” and its focus on a limited repertory of certified masterpieces, mostly of German or Austrian origin. He was also one of the few who understood how the economics of the system worked. One of his book chapters was “How Composers Eat, or Who Does What to Whom and Who Gets Paid.”

The book caused a ruckus in the music and media worlds, and the New York Herald Tribune promptly hired Thomson as its lead music critic. He filled the post for 14 years, producing a body of work widely seen as some of America’s best critical writing on any field. That reputation rests as much on his prose style, which was direct, energetic, and highly individual, as his extensive knowledge. “Yesterday’s performance was a ripsnorter for gaiety, vigor, and general run-around,” one began. Another led with, “Wanda Landowska’s harpsichord recital last evening was as stimulating as a needle shower.”

Violinist Jascha Heifetz and his gleaming virtuosity wasn’t much to Thomson’s taste. His critique was titled “Silk-Underwear Music” and ended with “Four-starred, super-luxury hotels are a legitimate commerce. The fact remains, however, that there is about their machine-tooled finish and empty elegance something more than just a trifle vulgar.”

In his memorable description of Giuseppe Verdi’s La forza del destino, Thomson comically mimicked the plot’s ineffective structure in the writing style of his review: “It suffers from a libretto that is little more than a stringing together of all the 19th-century Italian theater hokum that its author had ever heard of, and that means practically all there was. There are murders and maledictions and tavern gaieties and transvestitism and mistaken identity and a battle and a storm and an eating scene and a comic monk and a paternal abbot and a male chorus dressed up as Franciscans and several duels and at the end a general carnage of all the principal persons.”

“Wagner without his erotico-metaphysical paraphernalia is a better composer than with it” was Thomson’s evaluation of Richard Wagner’s Die meistersinger. His celebrated three-word summary of Tristan und Isolde? “Just lieder, louder.”

“What terrifying letters you write: fit for the flames is what they are,” fellow composer Aaron Copland wrote to Leonard Bernstein in 1940. “Lenhut,” as he often referred to himself in letters, was an indefatigable correspondent who wrote thousands of funny, poignant, earthy, bitchy, and occasionally terrifying letters before his death in 1990.

When The Leonard Bernstein Letters was published in 2013, The Economist named it one of their books of the year, saying, “With their intellectual brilliance, humour and wonderful eye for detail, Leonard Bernstein’s letters blow all biographies out of the water.” They provide an unparalleled sense of his personality and range of interests; the composer’s pen pals including Frank Sinatra, Miles Davis, Harpo Marx, Arthur Miller, Bette Davis, and Jacqueline Kennedy Onassis, in addition to family members and professional colleagues.

An especially rich selection dating from the rehearsals for West Side Story in 1957, includes an Aug. 8 letter to his wife, Felicia: “We wrote a new song for [the character] Tony that’s a killer, & it just wasn’t the same not playing it first for you. It’s really going to save his character — a driving 2/4 [meter] in the great tradition, but of course [expletive] up by me with 3/4s and what not — but it gives Tony balls, so that he doesn’t emerge as just a euphoric dreamer.”

His missive ends with a postscript about his five-year-old daughter: “I adored Jamie’s letter, especially the lentils.” ( Jamie Bernstein grew up to be a writer, narrator, and filmmaker; her memoir Famous Father Girl is also a highly recommended read.)

Virgil Thomson referred to Leonard Bernstein as “the ideal explainer of music, both classical and modern.” He is best known in that guise for the 14-year series of young people’s concerts on CBS television, which won multiple Emmy Awards. Bernstein wrote all 53 episode drafts by hand on yellow legal pads, finally typing them as they approached final form.

His interests ranged far beyond the Eurocentrism that dominated musical thought then (and still does, in many ways), as he demonstrated in its second episode, “What is American Music?” Bernstein answered the question by citing its diversity of Western Hemisphere sources: “So what our composers are finally nourished on is a folk music that is probably the richest in the world, and all of it is American, in spirit, whether it’s jazz, or square-dance tunes, or cowboy songs, or hillbilly music, or rock and roll, or Cuban mambas, or Mexican huapangos, or Missouri hymn-singing.”

Not surprisingly, Bernstein’s interests extended to writing words for songs, as well as the music. He co-wrote the lyrics for West Side Story with Stephen Sondheim, then insisted on giving Sondheim full credit for them in gratitude for his work on the show. Songs with his words also appeared in On The Town, Wonderful Town, and Candide.

In I Hate Music! A Cycle of Five Kid Songs, Bernstein’s lyrics adroitly captured the zig-zag way kids really talk: “My mother says that babies come in bottles, but last week she said they grew on special baby-bushes. I don’t believe in the storks, either! They’re all in the zoo, busy with their own babies! And what’s a baby-bush, anyway!? My name is Barbara.”

And what they really think about classical music: “Music is a lot of folks in a big dark hall, where they really don’t want to be at all; with a lot of chairs and a lot of airs, and a lot of furs and diamonds! I hate music, but I like to sing.”

Recommended books: The Leonard Bernstein Letters (Yale University Press, 2013) and Famous Father Girl by Jamie Bernstein (Harper Collins, 2018). Both are available at the Santa Fe Library. The Library of Congress holds the Bernstein archives and much of the material is available online, including some work-in-progress scripts for the Young People’s Concerts. Visit loc.gov/collections/leonard-bernstein /about-this-collection. ◀

Your introductory paragraph is plain out false. There are dozens of composers who have written essays and even entire books that can be read “the Common reader.” Here are a few: Bela Bartok, Elliott Carter, Aaron Copeland, Morton Feldman, John Cage, Henry Cowell, Harry Partch, Charles Seeger, Igor Stravinsky—even Schoenberg wrote some essays that can be read and understood without being a trained musician. Virgil happened to be a critic for the New York Herald Tribune—back in the day when there was real journalism by many careful, literate and intelligent writers.